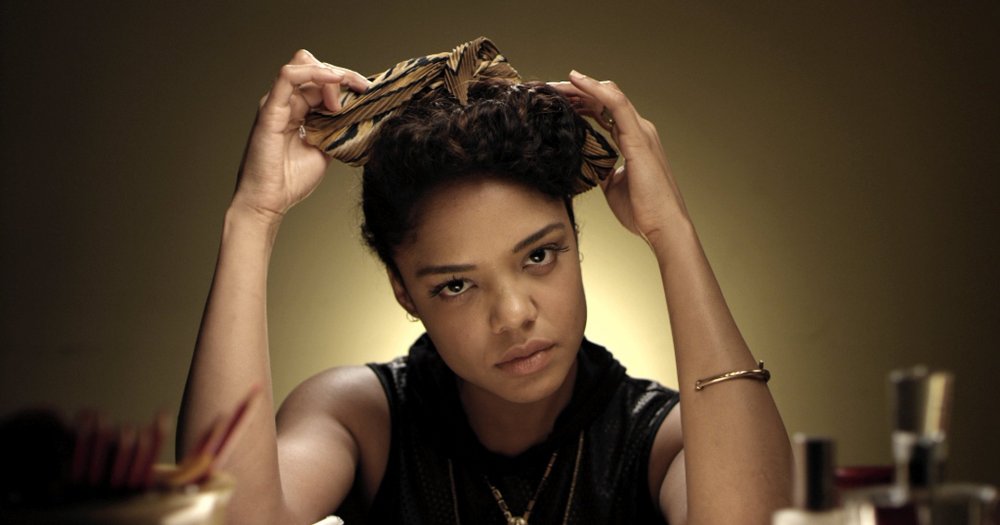 The initiates of Animal House may have been on ‘double-secret probation’ with their school’s humourless administration, but nearly 40 years later they’re on the honour roll. That film didn’t originate the reliably relatable slobs-vs-snobs dynamic underpinning so much American film comedy – for that you can thank Groucho Marx and Margaret Dumont – but John Landis’s 1978 hit still feels like a primal scene of sorts: a hazy, undisciplined bacchanal populated by up-and-coming kids who mostly burned out or faded away – not unlike college, in fact.

The appeal of Animal House lay in its canny rejection of the elitism associated with post-secondary education in the US. Although its undergraduate protagonists flunked out of school, we were assured they would go on to more prosperous careers than their straight-A peers. In this way, the movie got to have its keg and chug it too.

Even if Justin Simien’s Dear White People probably owes more to Spike Lee’s School Daze (1988) and the outrageous affirmative-action satire Soul Man (1986) than Animal House, it’s tempting to see it as a spiritual sequel – and intentional reversal – of Landis’s classic. This time out, the most sympathetic characters are the over-achievers – the ones who get their homework done and chase after reference letters and recommendations with single-minded determination. They’re also predominantly black or mixed race. The film takes its title from the catchphrase of campus radio DJ Sam (Tessa Thompson), a stylishly radical young woman who has taken it upon herself to try to trigger the not-so-invisible fault line separating white and black students at the very tony (and totally fictional) Winchester College. 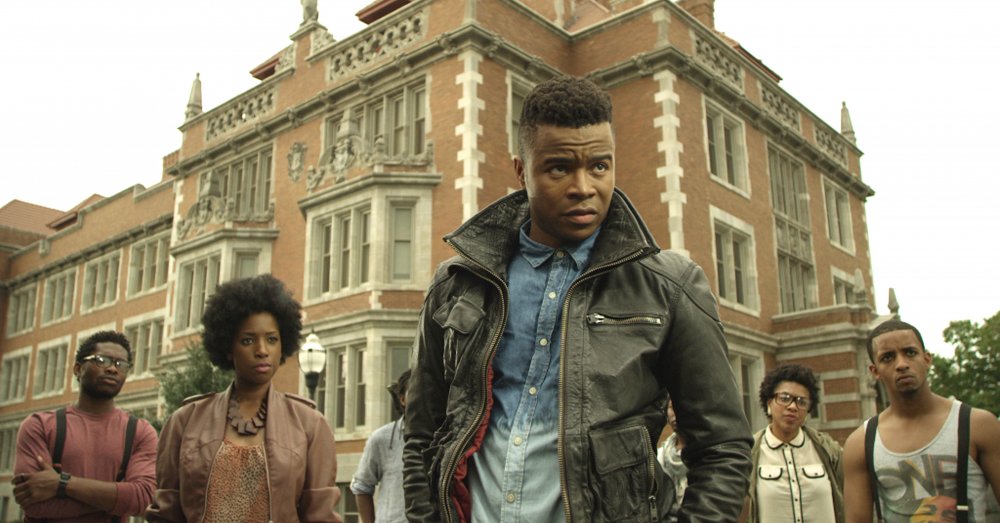 Sam’s militancy makes her an outlier in a student community where the most popular figures are more interested in seizing their share of power than fighting it. Exhibit A is the universally beloved Troy (Brandon Bell), who preaches unity from his perch in student government – until Sam, who also happens to be his ex-girlfriend, usurps him with a fiery speech advocating that residences remain segregated in the interests of subcultural solidarity. She has also produced a student film, Rebirth of a Nation, comparing Tea Party activists to the KKK, which doesn’t go over well in a classroom whose white students see themselves as the very model of modern, Obama-era progressivism. 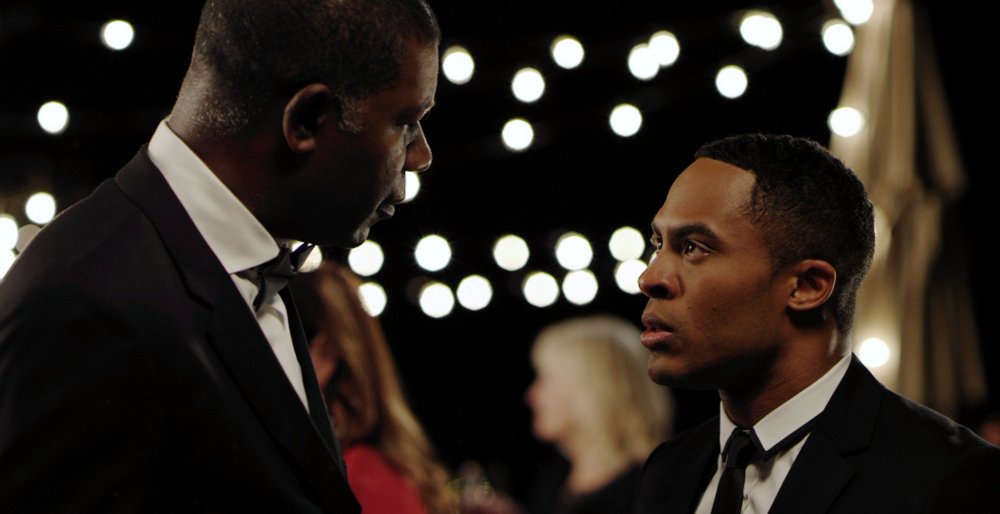 Sam, Troy and the film’s other major African-American characters – wannabe journalist Lionel (Tyler James Williams) and aspiring TV star Coco (Teyonah Parris) – are all bright, ambitious, smartly politicised and well positioned to shatter the glass ceilings that have been in place for generations, but they’re hardly secure in their racial identities. When Troy tries to join the staff of Winchester’s Lampoon-style publication Pastiche, he begins to suspect that he’s being used as a token; ditto Lionel, whose homosexuality is as much of a fetish for his peers as his Afro. What’s mitigating all these underlying tensions is money – everybody at Winchester seems to have some kind of safety net to fall back on. But some privileges are priceless, and all the different plot threads weave steadily towards an invitation-only fraternity party where white kids gleefully get their freak on in full hip-hop drag – a hideous display that shatters the ‘post-racial’ fantasies of characters and audience alike.

This get-together is staged as Dear White People’s climax and it’s a powerful sequence, a bookend to the gut-shot punchline of Bamboozled (2000), with preppy students in White Negro drag updating the old-school blackface and minstrel-show imagery compiled by Spike Lee. It also places the placidity of Simien’s filmmaking into sharp relief: afterwards, the flat affectlessness of the earlier scenes makes sense. There’s an archness to the style of Dear White People that’s entirely intentional; a lot of reviewers have invoked the pop-up-book aesthetics of Wes Anderson, while the mix of distanced widescreen compositions and bursts of classical music knowingly evokes Stanley Kubrick, especially Barry Lyndon (1975), which is appropriate given the newer film’s focus on ruthless class aspiration. 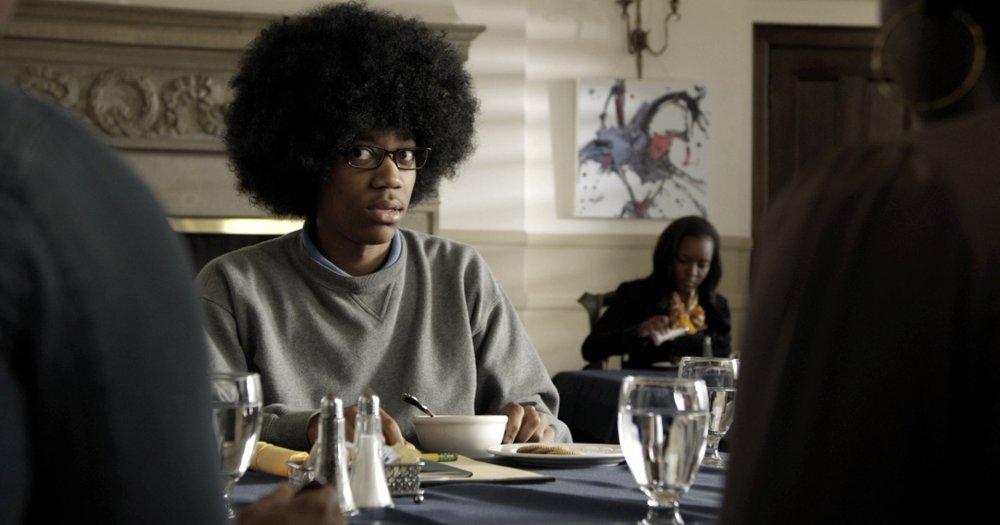 Just because Simien knows what he’s doing doesn’t mean it works, at least not entirely. Dear White People is less than the sum of its very polished parts – a first feature that’s just impressive enough to be frustrating. Sam’s desire to turn herself into a loud-and-proud mouthpiece defines her character, and Thompson’s excellent performance connects this aggressiveness to a very plausible sort of insecurity (Sam’s own mixed-race background plays into her us-vs-them rhetoric). But elsewhere, the characters are defined more by how their creator places them on his carefully drawn-up narrative grid, and the actors are smushed into two-dimensional figures – vivid but empty vessels to carry Simien’s theme of free-floating confusion.

There’s a case to be made for the characters’ blurriness as a by-product of their youth – they’re personalities in formation – just as the film’s mildness could easily be pegged as a parody of the forcibly clenched decorum that rules at high-end universities (and, it’s implied, the corporate interests eyeballing graduates). What’s unclear is whether this reticence signifies anything beyond the director’s own sensibility. For all its hot-button rhetoric, Dear White People feels safely contained in a way that exceeds its satirical function. 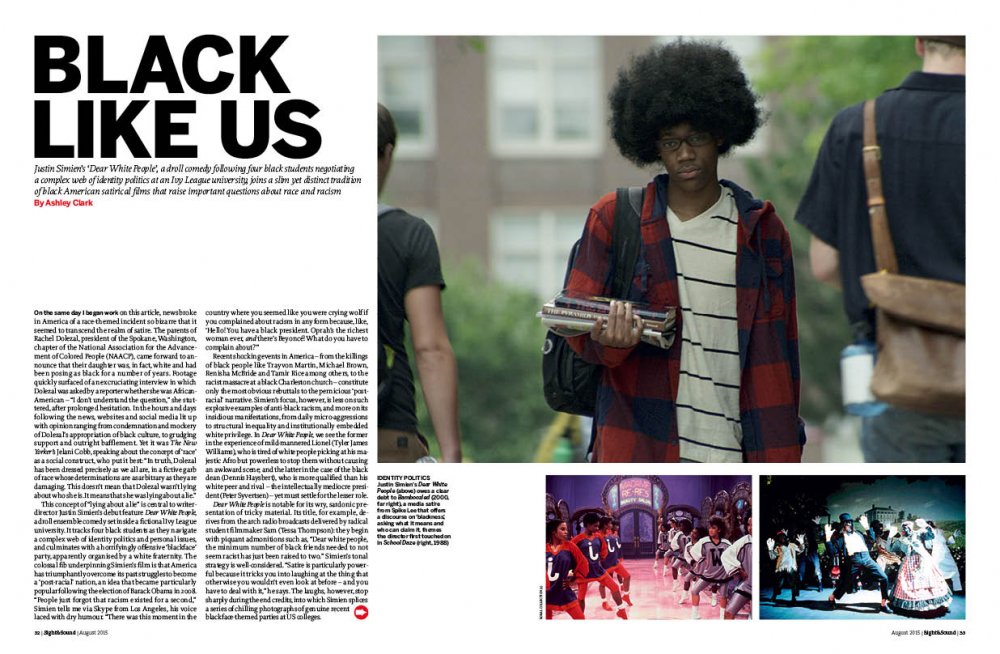 Related to Film of the week: Dear White People