Ash Is Purest White review: a woman toughs it out to forge her destiny

Jia Zhangke gets under the skin of 21st-century China with this superbly acted film that strays, briefly and thrillingly, into the gangster movie genre. 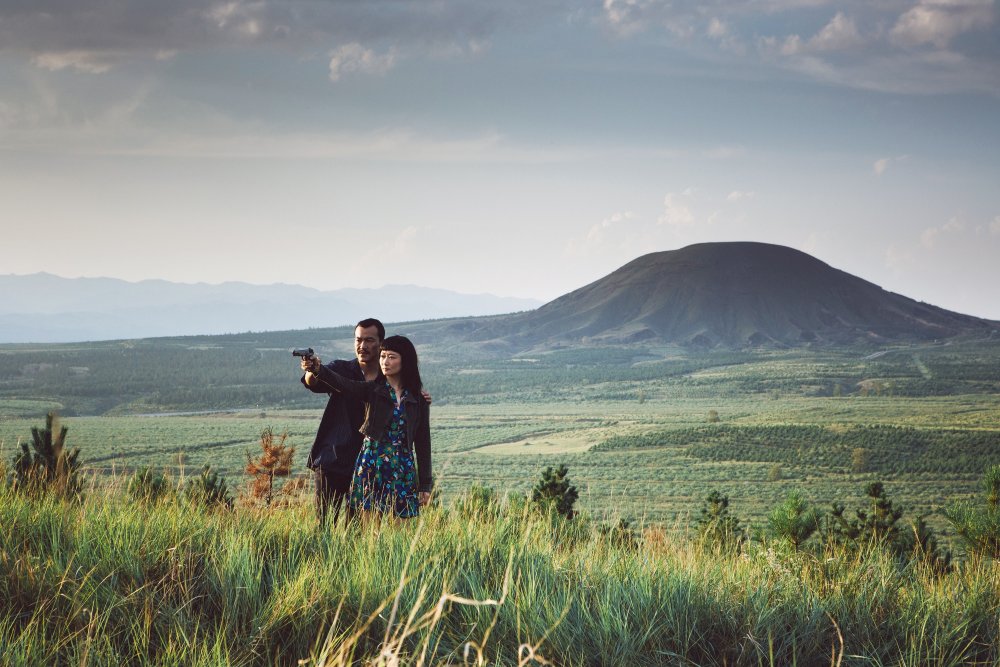 Jia Zhangke is nothing if not consistent in his preoccupations. Ash Is Purest White continues his ongoing study of China’s social and economic changes this century, using an extended time span as in its predecessor Mountains May Depart (2015); it revisits various locations from Jia’s earlier films, notably using the rising water surfaces of the Three Gorges dam to mark the passage of time (heroine Qiao visits the dam in 2006, the year Jia made his Still Life there); and, as in Still Life, Ash disrupts the smooth surface of politically anchored realism with allusion to UFOs, apparently glimpsed by Qiao.

Jia also heads into genre thriller territory, as in his 2013 portmanteau drama A Touch of Sin – but here, only up to a point. The film’s first third gives a glimpse of gang life and its ostentatious rewards – with comic touches such as the ballroom dancing duo kept as personal entertainers by Eryong, the boss of Qiao’s partner Bin. In the background, corruption and opportunism are constants, from the self-serving mine boss to entrepreneurs such as Bin’s associate Jiadong, who has successfully gone legit after studying enterprise law in prison.

In this section, Qiao and Bin are no less performers than Eryong’s pet dancers. The rakishly moustached Bin, played by the saturnine Liao Fan, exudes tough-guy glamour, authoritatively settling disputes between the regulars at the gambling house he runs, while the universally adored Qiao is first seen gliding on to the premises, maintaining a wry silence as she administers playful punches to the gamblers’ backs. Qiao doesn’t regard herself as belonging to the jianghu gang world, but once Bin has shown her how to use a gun, she has irreversibly become part of it – more profoundly, it turns out, than Bin himself. 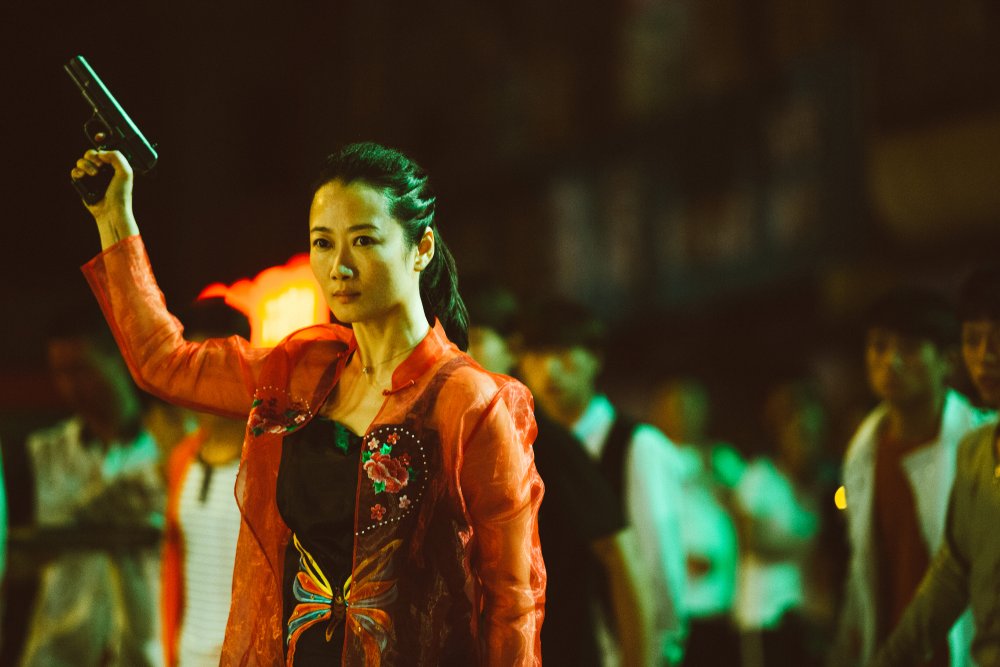 Her apotheosis as part of that world – and the film’s short-lived apotheosis as a genre exercise – comes in the kinetic sequence where Bin fights his attackers and Qiao drives them off, brandishing her lover’s gun. Qiao, in the lurid glow of the city night, is frozen, as if on a movie poster, in the pose of an archetypal ‘kick-ass’ heroine. Steeped in electric colour, this is the most visually stylised sequence in a film in which DP Eric Gautier runs through a series of visual textures and formats characteristic of the period.

But this is a tellingly brief moment. Immediately after, Qiao, and the film, are abruptly transformed as she goes to prison. Gone is the pop-star chic of her fashion style, to be replaced first by a bulky prison uniform, then by the functional clothes of a much quieter, seemingly impassive woman who chooses not to be conspicuous in the mundane world she now inhabits, but who is nevertheless implacable in making her way through it.

The film’s English title derives from a scene where Qiao and Bin observe a volcano, whereas the Chinese title Jianghu er nu means ‘Sons and Daughters of Jianghu’ – that word referring both to the criminal underworld and the codes by which its members are supposed to live. In Jia’s film, jianghu is seen as a zone of conduct that people may enter knowingly or unknowingly; that they may choose to leave, or commit themselves to unconditionally. Handing Qiao his gun in the volcano scene, Bin tells her that she’s now in the jianghu, and she sceptically replies, “You’ve watched too many gangster movies, there’s no more jianghu.” (As in so much crime cinema, this film’s wiseguys do indeed sit around watching gangster movies.) 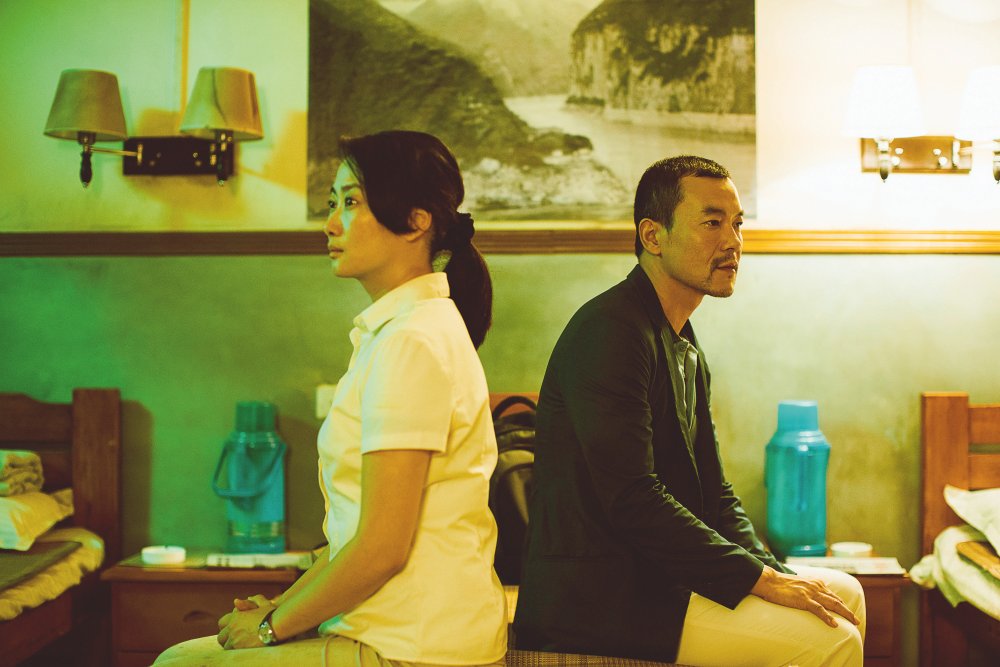 The matter of the couple’s statuses within that world arises again in a superbly acted, intensely controlled scene – a ten-minute single take in an impersonal hotel room – as the now humbled Bin tells Qiao that he’s no longer part of the jianghu world. Living off her wits in her journey from prison – pulling blackmail scams on gullible men, stealing a motorbike from a randy bike-taxi man – Qiao tells Bin, “I’ve been living as a jianghu just to find you.” The minute she picks up his gun, she crosses into a world of criminality – but also into an order of moral integrity that may not be the jianghu code per se but is now absolutely hers. While Bin has acquiesced in his social downfall, and dropped out of the order he once embodied, Qiao has accepted a one-way ticket and followed her destiny all the way.

Mesmerisingly played by Jia’s regular star Zhao Tao, Qiao is not just one woman, but passes through multiple guises. The gun-toting heroine of her action moment is just one fleeting persona: beyond it is a core of tenacity and integrity strengthened and purified, ash-like, in the white-hot crucible of solitude and adversity. 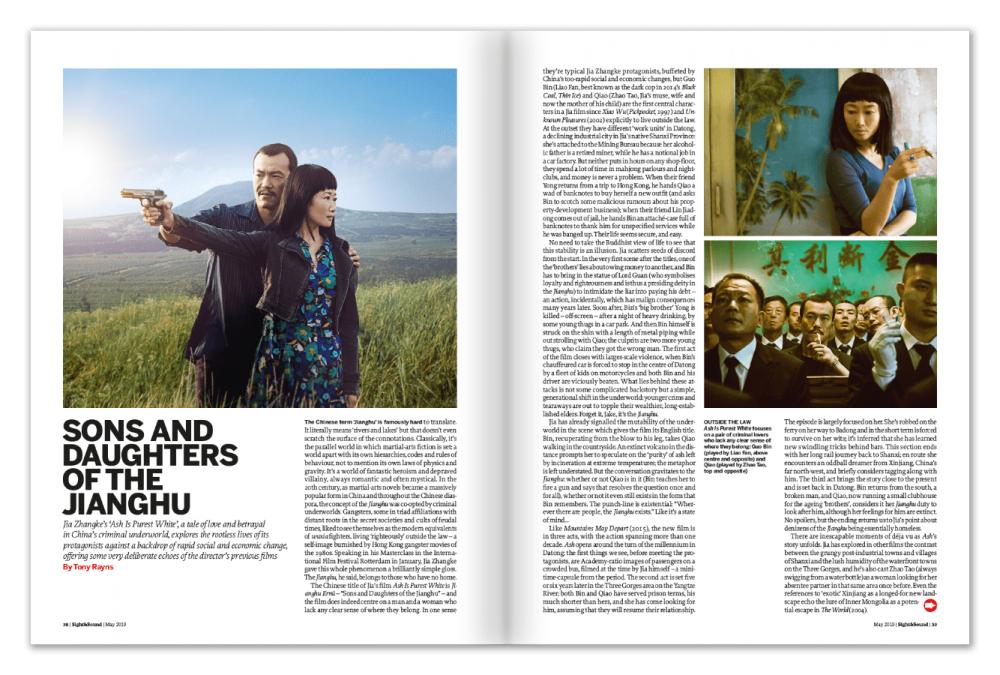 Sons and daughters of the Jianghu

Jia Zhangke’s Ash Is Purest White, a tale of love and betrayal in China’s criminal underworld, explores the rootless lives of its protagonists against a backdrop of rapid social and economic change, offering some very deliberate echoes of the director’s previous films. By Tony Rayns.

Related to Ash Is Purest White review: a woman toughs it out to forge her destiny