This latest survey of the state of artists’ movies celebrates the cultural and technological ambiguities and impurities of the moment – and is best at its furthest remove from pure classical ‘film’. 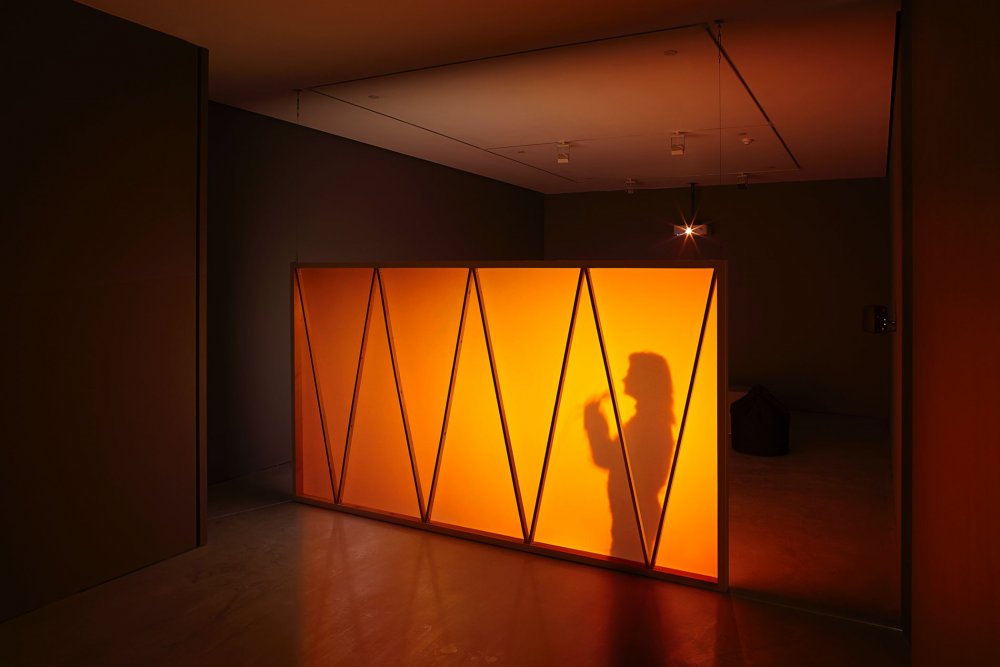 To Valerie Solanas and Marilyn Monroe in Recognition of their Desperation (Pauline Boudry and Renate Lorenz, 2013)

Almost 20 years have passed since Spellbound, the Hayward Gallery exhibition which invited filmmakers and artists to explore the link between the ‘youngest art form’ and the visual arts. Featuring Douglas Gordon’s 24-hour version of Alfred Hitchcock’s Psycho and Steve McQueen’s In Stage, it was the first of its kind and of many such surveys to come.

Since that exhibition we have witnessed an explosion of interest towards artists’ moviemaking, in all its forms and manifestations. So much has changed that 24-Hour Psycho is now a contemporary art classic and McQueen has become a leading feature director.

Carroll / Fletcher’s Now Showing: A Group Exhibition of Artists’ Film is part of the latest wave of interest in this area. Noticeably, it takes place at a time when movies are increasingly identified with the digital medium and celluloid film is more likely to be presented in art galleries than in cinemas.

In this sense the title is deliberately confounding. A “group exhibition of artists’ film”, it concentrates on works presented entirely through digital means. The selection, whilst reiterating Carroll / Fletcher’s specific interest in contemporary artists’ use of creative technologies, also underlines the state of flux the elements constituting moviemaking are in.

Despite the straightforward premise and not novel parameters of the selection, this heterogeneous choice of works results in an interesting show about the time we live in, one of cultural and technological impurity. To this end the exhibition includes several works entirely based on found footage, reproduced and manipulated in order to provoke rational self-reflection and a critical view of the images presented. 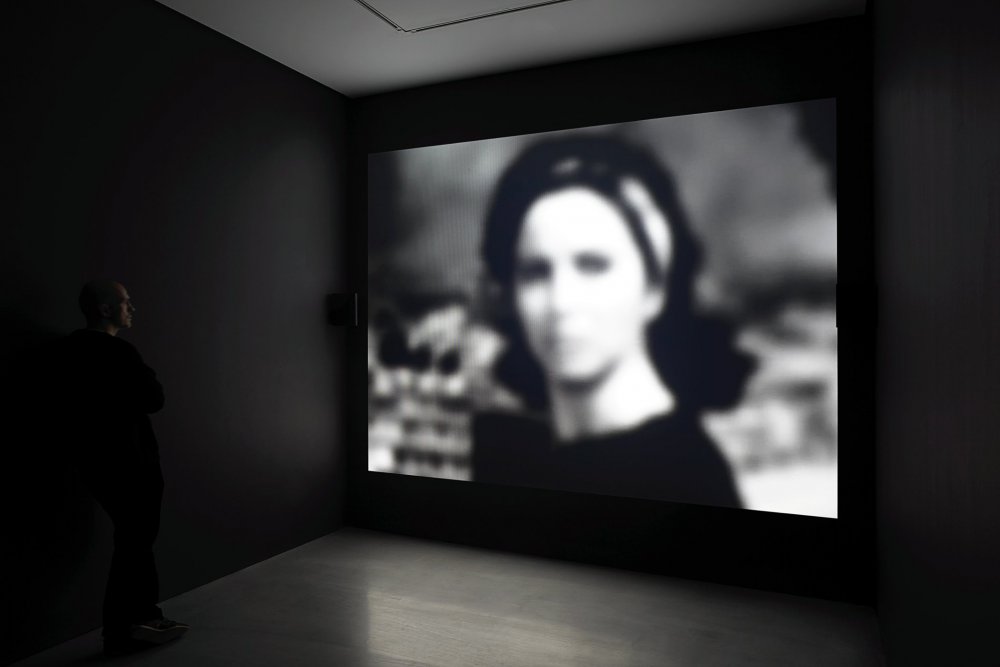 Collapse, by Palestinian duo Basel Abbas and Ruanne Abou-Rahme, stands out as a very effective example of this type of practice. Its constituting elements are extracts from feature films such as, amongst others, Gillo Pontecorvo’s The Battle of Algiers, Henry Barakat’s The Open Door and Sergei Eisenstein’s Battleship Potemkin. These are then interwoven with fragments taken from newsreels and sound archives, as well as Palestinian landscapes shot by the artists and field recordings they carried out.

Sound and images come together through relentless interlacing in this 2009 installation, which is structured around themes of motion and stillness, suspension and repetition. The end result develops in unexpected curves, and yet feels continual, replicating the workings of memory.

Declaring their attempt to make sense of the relationship between history and the present times, the artists challenge the spectator’s capacity to distinguish between reality and fiction. Found footage is instrumental within this process, allowing the audience to be transported into that very elusive space between the personal and the historical.

While in the installation room, the spectator’s perception is trapped between heightened emotion on one side and suspension of disbelief on the other, in a space where spectacle and criticality overlie. 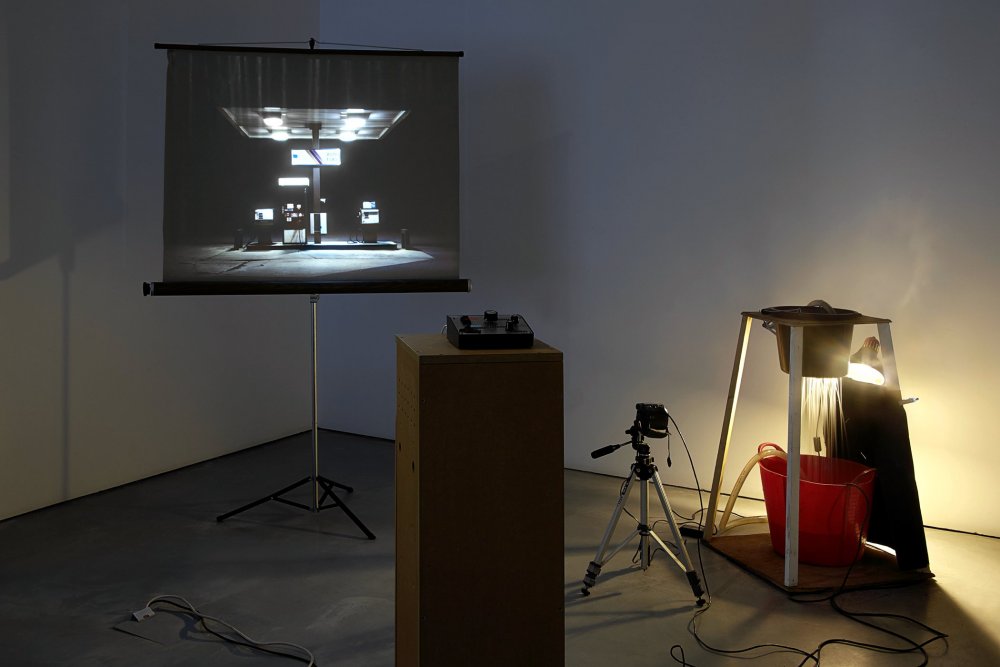 In a diagonally different way, Joe Clark’s 2009 Somewhere in West Virginia also transports the gallery visitor into an in-between state – between the movie spectator and the participant.

An artist working primarily with photography and installation, Clark created an interactive looping movie, of which visitors can decide the look and feel. Via a simple control station, they are invited to regulate the amount of light and rain falling on an unspecified petrol station reminiscent of an Ed Ruscha painting or a Wim Wenders movie scene.

The rain effect is created via a video camera capturing a bucket, water, pump and hose installed in the gallery space, and the light effects are generated via a simple desk lamp pointing to the projection screen. In an instant the visitors find themselves catapulted in a postproduction room, whilst the nature of the installation and of its exposed working parts playfully remind them of the fiction-making nature of movies.

Paradoxically, the most successful pieces in the exhibition are the least directly filmic. This is certainly the case with To Valerie Solanas and Marilyn Monroe in Recognition of their Desperation, by Pauline Boudry and Renate Lorenz, a 2013 piece which combines performance and moviemaking to comment on issues of gender politics. In it six performers, including a singer and five musicians, follow a 1970 score by Pauline Oliveros, the influential composer and post-war electronic music pioneer. Written after reading Valerie Solanas’ 1967 SCUM Manifesto, the score was a response to the challenge posed by the radical feminist writer – and Andy Warhol shooter – to society’s patriarchal order. 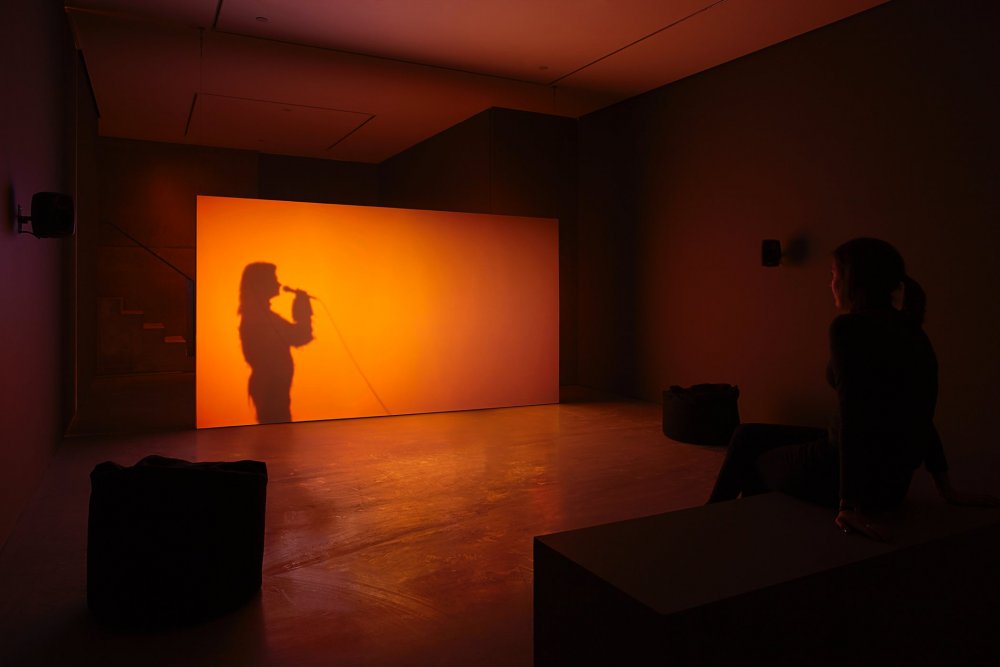 To Valerie Solanas and Marilyn Monroe in Recognition of their Desperation (Pauline Boudry and Renate Lorenz, 2013)

Oliveros’ original directions were that none of the performances should become dominant, ensuring a continuous circulation of power. Following the score, the performers choose five pitches each and play very long tones, modulated or un-modulated, then imitate each other‘s pitches and modulations. Nothing is planned in advance but cues are given through light – red, yellow, blue and strobe – marking distinct sections.

A 16mm camera shoots this 17-minute movie in a single take, acting as the essential seventh performer, moving slowly but relentlessly across the space. Encountering the performers one by one and occasionally filming its own shadow, the camera is as democratic in its choices as the performers’ accomplishments. In doing so it requires the spectator’s continual alertness, precisely the goal of Oliveros’ score and of any good movie.

What makes To Valerie Solanas… very effective within this exhibition is the fact that beyond its complex and well-articulated reflection on gender politics and recent feminist history, it recognises that moviemaking is at its best when it is outward looking, finding strength in its relationship with the performative. And this relationship to performance is precisely what marks this work – amongst all in the exhibition – the most representative of the latest developments in artists’ experimentation with the moving image.