Artist Mat Collishaw on Armenian shrines, YouTube sheep sacrifices and his homage to the strange world of Sergei Parajanov. 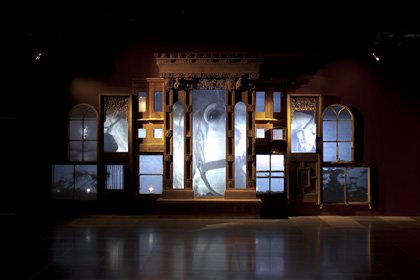 I’ve got more fire going in. That window over there will be burning. And I’ve got blood, which may be a bit too much. I threw fake blood at a blue screen and filmed it dripping down. So you’ll get blood running from one of the corners of the windows…

Mat Collishaw is talking me through his installation RETROSPECTRE – a response to the films of Sergei Parajanov that takes the form of a large wooden structure made from doors, windows and altars, framing a multitude of short films which Collishaw has both found and shot himself. At first, with the projection of images of burning candles, the installation seems to mimic a makeshift shrine, but as scenes of animal sacrifices and shots of tempestuous, apocalyptic landscapes emerge, it turns into a dark, ghostly cabinet of curiosities.

Certainly, a knack for creating mysterious yet hypnotic visual spectacles is something Parajanov and Collishaw share. With both, too, though, there’s always a sense of brutality lurking beneath the beauty. Collishaw first encountered Parajanov’s films after being asked to appear in a group show titled ‘Shadows of our Forgotten Ancestors’, after the film-maker’s first feature to reach international audiences. The piece he exhibited, of a bullfight, reflected Parajanov’s love of ritual; Collishaw describes it as “a little theatre of cruelty being played out before your eyes.”

When I visited Collishaw in his studio, he was still experimenting with the new piece – two-way mirrors had just been installed so that the projections intermingle with the reflections of those watching it. “It’s most effective when each window has a separate image in it and then suddenly you’re hit with the whole big projection,” he explains. “But the sound is really going to bring it to life. It will reflect what’s going on visually – there’re going to be moments when it’s really quiet with just a bit of an echo, and then really loud moments, like thunderstorms and animal noises.” Despite its elaborate framework, “the technology of the whole thing is actually very simple,” he insists. “Just a couple of little cheap projectors running off one computer.”

Collishaw was part of the YBA movement in the late 1980s, and while he has never worked directly with film before, he has used moving images in installations. Past projects include animating famous paintings such as Böcklin’s Isle of the Dead and Girogione’s Tempest with a host of retina tricking mechanisms, anamorphic cylinders and mirrors among them. He’s also no stranger to working outside of the art world – a recent exhibition at the Freud Museum showed images of mutilated butterflies, which were fitting he says, as they reminded him of a Rorschach print, their distorted symmetry recalling a damaged mind. 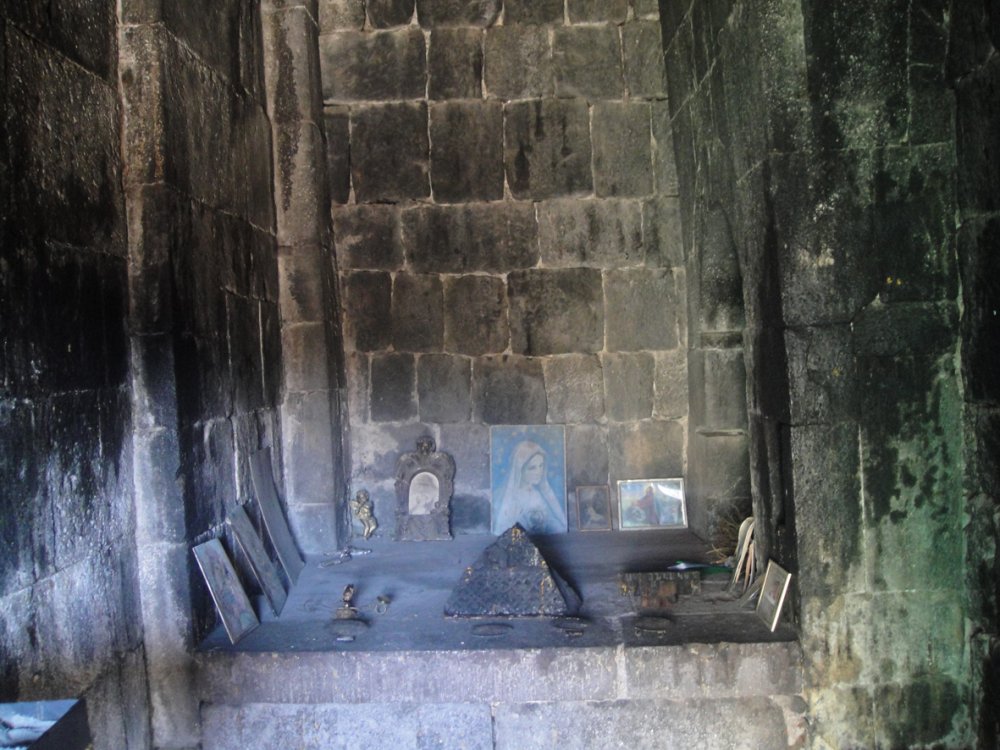 Isabel Stevens: What attracted you to Parajanov’s films?

Mat Collishaw: With a film such as The Colour of Pomegranates, what you have is a very basic moving image. He uses a locked camera, which I really like. It’s like a painting or tableaux: the parameters are fixed. He uses that Byzantine, medieval-Church way of approaching his subjects: everything is very flat. What’s also interesting to me is that Parajanov uses motifs and objects from very primitive, pagan-type religions and also Christian iconography as well, but he mixes it up like he doesn’t want to be particular to any of those religions. And the result is this really very powerful sequence of images, a bit like Pasolini, whose work I knew beforehand and really admire.

He’s a film-maker who doesn’t deal so much with narrative. There are simple narratives going through his films, but really it’s all about the luxurious visual experience of watching these ritualistic events. His films are very elemental; he’s interested in the basics: fire, water, life and death. And he’s very good at letting the images accrue their own weight – he lets you make your own mind up about them.

A lot of his scenes involve frames within frames, which is a device that I’d already used. Also, at the core of his images there’s a sense of beauty mixed with cruelty. For me, that’s almost like a formal requirement: to find images that draw you in but at the same time repulse you; to have these two oppositions constantly in turmoil. I can’t think of many other directors to whom I could respond so naturally.

How do you go about making a tribute?

It’s a difficult task. Picasso’s homages to Velázquez are great paintings – but I always think, “Why didn’t you just do your own work?” I didn’t want to get caught up in the homage. You need to allow the work to breath in a proper way, to stand on its own, and to do so it’s got to be your own art.

What research did you do?

I went to Armenia to get a flavour of the place. I visited a couple of monasteries, including Haghpat [where some scenes for The Colour of Pomegranates were filmed]. They were very old and peaceful, set in this spectacular countryside, perched right on top of hills. Isolated rural spots such as these are still very poor and you got the sense that some of the traditions Parajanov filmed still go on. The one disappointment was the lack of snow, which in his films really adds to the sense of isolation.

And where his films would lead you to expect vibrant colours, Yerevan itself is very modern – disappointingly, since it’s one of the world’s oldest cities – and all grey and concrete. Certainly you can understand Parajanov’s reaction to all the Soviet drabness. One of the things to admire was his courage. Back then you had to make films about tractors and that was it – and he refused. 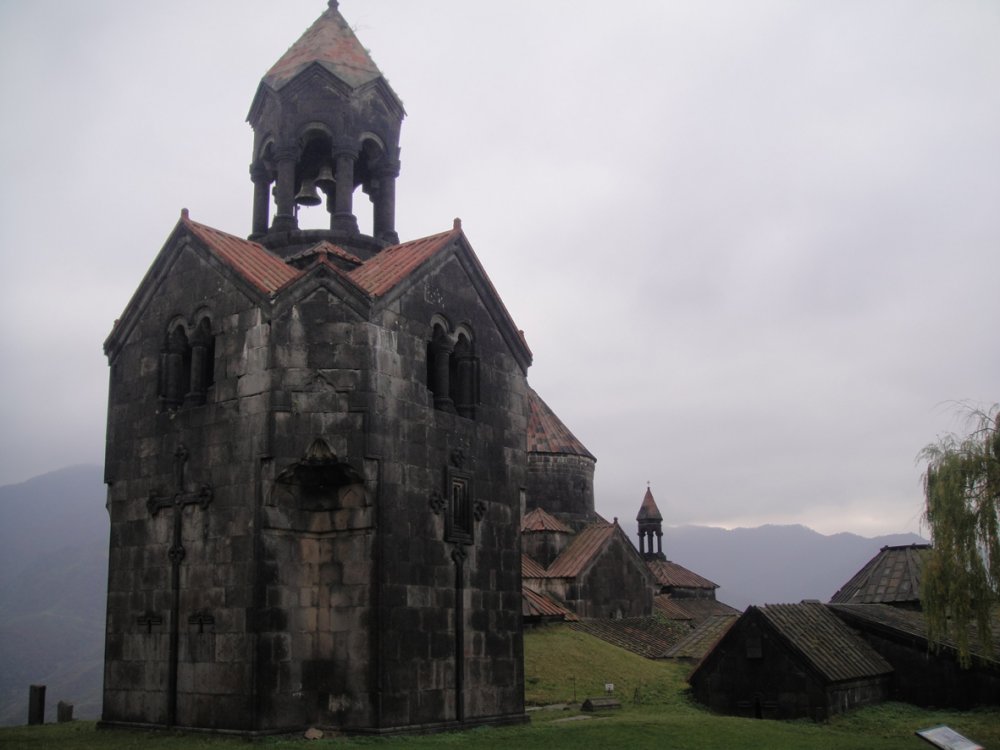 It’s a big dusty old house with all these funny little bits and pieces – vignettes, things that he’s nailed together, glued and cut and pasted. Some were pretty bizarre: an elephant made out of suitcases on the wall. There were quite a few collages on display that he made whilst in prison – interesting as doodles or sketches for his films, rather than great art in themselves. The museum was all very ramshackle, but true to his spirit; I don’t think he would have wanted a pretentious, clinical space for his work.

What led you to create this huge wooden shrine-like structure for ‘RETROSPECTRE’?

A lot of Parajanov’s collages have a shrine-like quality. I thought about all of the apertures that you could use for presenting images, and ended up collecting: an 18th-century altar, sash windows that I found down the street, old doors that I bought off eBay, bird cages and various shrines; lots of different bits and pieces into which I could break the film. My aim was to make something quite seductive and exciting. The mystery of the image is very strong in Parajanov’s work: he creates these potent images that evoke something in us beyond theory – that of film or art.

How did you go about constructing it?

I photographed everything and then moved it about on the computer until I found an arrangement that worked – it’s a bit big to keep chopping around. As for the look, I don’t want it to be pristine – I want to keep it in its condition now, with bits of broken glass and dried paint drips and the sense of it being cobbled together.

What led you to use mirrors to project through and onto?

Normally when you project an image, black is black and that’s it. But with these mirrors in each window, the image becomes a lot more elusive – you can see the projected image but also what is black on the image becomes mirror, so you get people’s reflections too. It gives it a spectre-like quality. 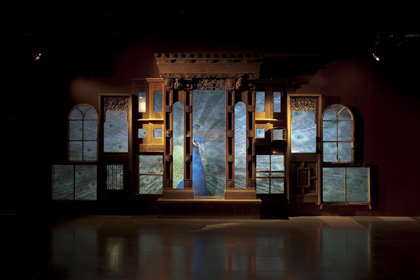 Where did you find the clips?

Some I shot in Armenia, others in England. Others I found; the sheep having its throat cut and its blood spurting onto the floor is from YouTube. They still do sacrifices in Armenia but it was difficult to pin them down to a place and time. I bought a couple of clips from a science laboratory. The smoke is actually burning water, but it looks like an oil slick that’s caught fire. The funny thing is there are lot of animals in the piece but no people, whereas Parajanov’s films are filled with people. But I didn’t think that was going to work very well here; I couldn’t imagine having actors in it.

You’ve worked a lot in the past with zoetropes and with animated images. Would you ever be tempted to make a film?

When I was a kid we didn’t have a TV, and I was fascinated by images – I used to make lots of Weetabix-box theatres, and watch TV through other people’s windows while doing my paper round. For me, it was incredible to see that little box in the corner of people’s living rooms with something animated in it. And that was enough: I never felt I needed any narrative at all; just bringing something to life was enough. If you’re a painter, you animate that rectangle on the wall. Yeah, I’d love to make a film. But I think it’s quite a luxury.

What do you think about the trend towards watching films in the gallery, rather than the cinema?

I’m not so sure the art gallery works for narrative films. What I love about art galleries is that you can spend exactly as much time as you want in them. For me that creates much more tension between you and the object. When you have a narrative, a beginning and an end, you’re into a completely different genre, which I don’t think is the art business. Why not have comfortable seats and good acoustics? The gallery is a space where you can put down an ashtray and people will read it in a different way – you’re isolating something from the rest of the world to be looked at. I don’t see narrative film as fitting into that at all.