Mike Leigh gets Romantic, Darwinian sci-fi and the birth of the Method. Plus Nightcrawler, ’71, Gone Girl, Steven Soderbergh’s TV drama The Knick, the Venice and Toronto film festivals, agnès b, Zabriskie Point, Gregory J. Markopoulos and much more.

In print and digital from 3 October. 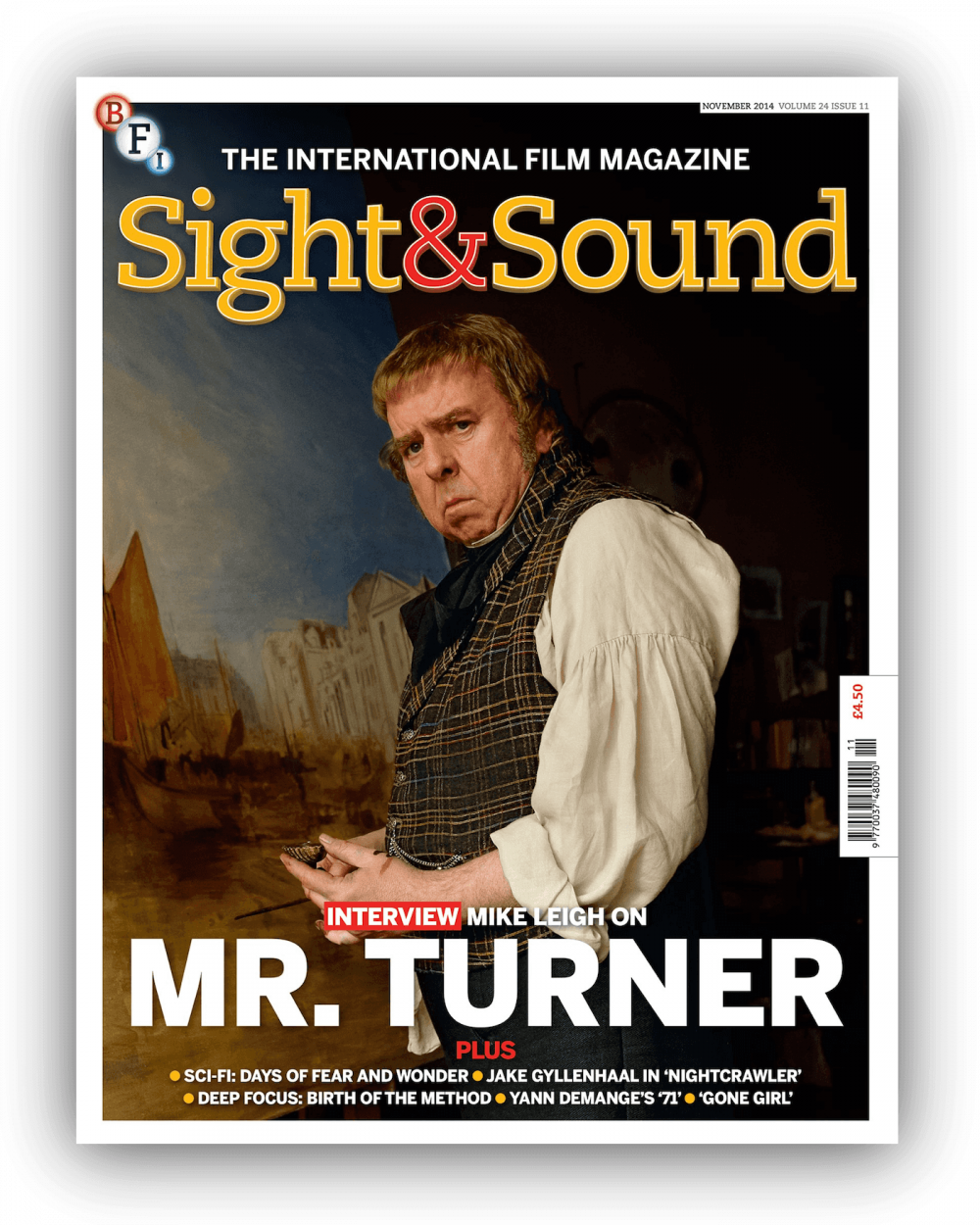 What do Romantic painter J.M.W. Turner, evolutionary biologist Charles Darwin and radical stage impresario Constantin Stanislavski have in common? All three form the inspirations for our movie subjects this month: Mike Leigh’s wonderful portrait of the painter Mr. Turner, the BFI’s monster sci-fi season and ‘the Method’ – the revolution in American acting that upturned post-war Hollywood…

“There are hundreds of actors out there who are not bright and who just play themselves,” cinema’s surly master Mike Leigh tells Isabel Stevens, explaining why consummate character actor and working-class Londoner Timothy Spall was the right man to play the “very little” Turner – “a passionate poetic clairvoyant” and “very mortal, eccentric curmudgeon”. Mr. Turner marks Leigh’s second adventure into 19th-century artists’ biopic, after Topsy-Turvy, and in the words of our review Kate Stables, it’s “both a paean to stubbornly personal late works and a glorious example of one.” Leigh opens up on the film’s whys and hows, from putting pigment on film to improvising with 19th-century language, while Michael Brooke widens our lens on the history of movies about artists and sculptors.

“Since science-fiction films are so bound up with the spectacular special effect,” writes Roger Luckhurst in Darwin’s Nightmares, the first of two features we publish this month to mark the forthcoming BFI blockbuster season Sci-Fi: Days of Fear and Wonder, “perhaps it is unsurprising that this cinema repeatedly returns to scenes of biological transformation… rendering magically visible the otherwise hidden springs of gradual evolution.” Tracing back the origins of the genre to the shock of Darwinian biology, Luckhurst offers four key chapters in the history of sci-fi cinema, from the materialist transgressions of Frankenstein et al, via the mutant monsters of atomic-era paranoia, and selfish genetics of 1980s body horror, to our new biotech century’s formally ambiguous ‘boundary crawlers’.

Overleaf, in The Future is Here, Jonathan Rosenbaum essays a different taxonomy of sci-fi cinema, taking as his premise J.G. Ballard’s diatribe against Star Wars and his differentiation between big-budget sfx-driven spectaculars and often more low-budget but conceptually imaginative endeavours, from Them! to Alphaville.

Also showing soon c/o the BFI, our latest Deep Focus primer investigates ‘the Method’ – or rather, methods: the new mode of realism in performance that emerged from Lee Strasberg’s Actors Studio in the 1940s and early 50s, itself inspired by the Stanislavski System developed at the turn of the 20th century by the Russian theatre theorist and practitioner at the Moscow Art Theatre. Montgomery Clift, Marlon Brando and James Dean – “the exquisite Method triumvirate – became perhaps the most widely imitated actors in film history,” writes Foster Hirsch. “To this day actors who strive to create an illusion of spontaneity and emotional depth on camera are working in a ‘line’ established by their iconic performances.” James Bell follows on with 12 movie case studies, all screening at the BFI Southbank from 25 October to 30 November.

Mike Leigh’s Mr. Turner painstakingly recreates the world of the Romantic landscape painter to illuminate the artist’s creative process. The director explains the challenge of portraying the details of a life in broad brushstrokes and why Timothy Spall was exactly ‘the right man for the job’. By Isabel Stevens.

+ Portraits of the artists

Mr. Turner takes its place within a wide canvas of films drawing on the lives and work of artists and sculptors that stretches back to the earliest days of cinema. By Michael Brooke.

The insidious altered states and transformations that abound in sci-fi cinema owe their genesis to the work of the great evolutionary biologist, and each new milestone in Darwinian theory, from The Selfish Gene to the Human Genome Project, provides fresh material for filmmakers to adapt to. By Roger Luckhurst.

Sci-Fi: Days of Fear and Wonder special: The future is here

While much big-screen sci-fi relies on splashy effects, plenty of less ostentatious films have made a virtue of their low budgets, either by cleverly employing the viewer’s imagination to fill in the gaps at key moments, or by presenting a dystopian vision of the present to stand in for the future. By Jonathan Rosenbaum.

Deep focus: Birth of the method – the revolution in American acting

Born from the experimental work of Constantin Stanislavski at the Moscow Art Theatre in the early 20th century and incubated in the 1930s at New York’s pioneering Group Theatre, Method acting exploded on to the stage and screen in the US at the end of the 40s and early 50s in the work of a new generation of actors such as Montgomery Clift, James Dean, Marlon Brando and Julie Harris.

Foster Hirsch explores the history of the new style, outlining the numerous ‘methods’ behind the process, while James Bell introduces the 12 films showing in our accompanying season.

+ Faith in the system

Although he only made two films, Jack Garfein, a central figure at the Actors Studio, is finally starting to enjoy the acclaim he deserves. By Clyde Jeavons.

In the frame: Shock treatment

Having ‘retired’ from Hollywood, Steven Soderbergh is applying what he learned in cinema to his TV medical series The Knick. By Peter Labuza.

More than just a novelty, roller skates are a way of injecting grace and fluidity into film – and deeply embedded in the form’s history. By Hannah McGill.

The depiction of African-Americans in film posters through the decades offers a fascinating reflection of the role of race in the movies – and life. By Ashley Clark.

Yann Demange, director of ’71, talks about super 16, balancing Pontecorvo and John Carpenter, and a lost chance for Ricky Gervais. By Adam Nayman.

Lauren Bacall may not have been everything her obituaries pretended, but she sure was something. By Mark Cousins.

Emma Thompson’s script about the events surrounding a Victorian legal cause célèbre was almost derailed by its own court battles. By Charles Gant.

The numbers: Two Days, One Night

The BFI/Aardman Animation Development Lab is an experiment that aims to tap into the UK’s strong tradition in the genre. By Ben Roberts.

Profile: From rags to pictures

agnès b. has made a seamless transition from fashion designer who filmmakers love, to film producer and now director. By Nick Bradshaw.

A handful of captivating titles failed to banish the sense that the festival is losing its way in an increasingly competitive circuit. By Nick James.

Toronto: steel behind the sheen

With Toronto beginning to flex its muscles over its programming policies, it’s hard not to see it pulling away from its competitors. By Ashley Clark.

Profile: No illusions, no hope

Soundings: Music that plays in the dark

Profile: Anarchy in the UK

Adam Kossoff’s documentary The Anarchist Rabbi shines a light on a notable figure in Britain’s newly resonant legacy of insurrectionism. By Sukhdev Sandhu.

Once considered the equal of Brakhage and Anger, Gregory J. Markopoulos’s exquisite films are finally being rediscovered. By James Boaden.

As Above/So Below
The Babadook
Before I Go to Sleep
The Boxtrolls
The Calling
Cathedrals of Culture
A Dangerous Game
Dolphin Tale 2
Draft Day
Effie Gray
The Equalizer
Finding Fanny
The Giver
Gone Too Far!
Human Capital
If I Stay
Jack to a King:  The Swansea Story
Jimi: All Is by My Side
The Judge
The Kidnapping of Michel Houellebecq
The Knife That Killed Me
Life After Beth
Love, Rosie
Manuscripts Don’t Burn
The Maze Runner
Mr. Turner
My Name Is Hmmm…
The Overnighters
The Riot Club
Sin City 2: A Dame to Kill For
Soul Boys of the Western World
Still the Enemy Within
Teenage Mutant Ninja Turtles
Time Is Illmatic
Tony Benn: Will and Testament
United We Fall
Violette
The Way He Looks
White Settlers
WolfCop

Brave new words: Out of the Unknown

With scripts by the likes of Isaac Asimov and J.G. Ballard, a 1960s BBC series used sci-fi to explore daring issues of the day. By Kim Newman.

The ’Burbs
Castaway
A Farewell to Arms
The Gang’s All Here
Juggernaut, Macbeth
The Medusa Touch
Outer Space: Three Cosmic Tales from the Children’s Film Foundation
The Party
Providence
The Shout
Twins of Evil

This tale of a besotted sailor and a Mata Hari-style spy is powered by simmering passion and psychological realism. By Graham Fuller.

Antonioni’s assault on the American Dream finishes on an uplifting note of clarity and liberating destructiveness. By Nick Pinkerton.