Inside the mind of Charlie Kaufman – we delve lift the lid on the self-reflexive writer-director as he returns with the puppet-animated Anomalisa. Plus Hitchcock-Truffaut, Creed, Point Break and the Hollywood reboot, Luca Guadagnino’s A Bigger Splash, Netflix’s Making a Murderer and the S&S Interview with the great production designer Jack Fisk. 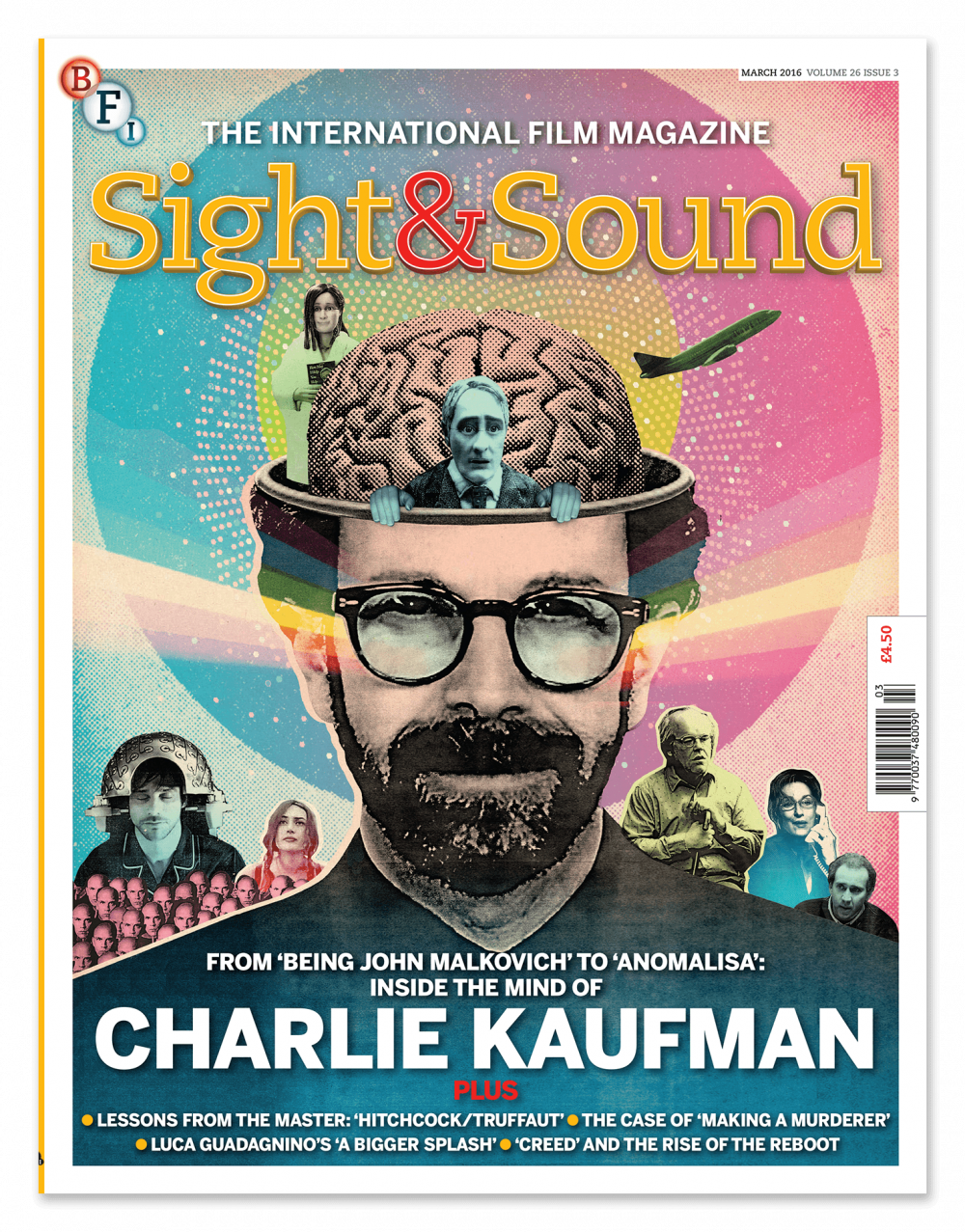 As our buoyantly expressive cover so boldly proclaims, the Sight & Sound March issue undertakes to delve into the head of Charlie ‘Being John Malkovich’ Kaufman, arguably contemporary American cinema’s most out-there writer and director – angst-ridden, wildly inventive explorer of interior continents and wrestler with the big themes of human identity and agency. His latest film Anomalisa is no exception, but with one glaring difference – it’s a stop-motion tale of a self-help author’s existential crisis made with high-tech dolls,  whose 3D printed features give eerie expression to the by-now trademark  anomie and dissociation. Jonathan Romney surveys the Kaufman oeuvre to date, while Nick Bradshaw chats with both Kaufman and doll-maker collaborator Duke Johnson.

Star Wars, Creed, Point Break – Hollywood seems awash with recycled properties reinventing well-known stories and characters for both new and nostalgic generations, but is this tendency more prolific than hitherto? And is it necessarily a bad thing? Nick Pinkerton ponders whether ‘pop culture is sagging under the burden of its own accumulated past’, and draws some surprising conclusions.

Film critic/programmer and S&S contributor Kent Jones’s absorbing documentary Hitchcock/Truffaut reconstructs the latter’s attempt to have the former recognised as a bona fide artist rather than mere light entertainer, which grew out of a series of interviews that took place mainly in 1962 and formed the spine of Truffaut’s book The Cinema According to Alfred Hitchcock, published in 1966. That book has become not only something of a classic of film criticism but also a how-to manual for budding film directors – as Jones’s film attests through interviews with Scorsese, Fincher, de Palma and other heavyweights. Henry K Miller explores Truffaut’s relationship with Hitchcock and the varied, shifting critical responses to his book, of which Jones’ film is the latest engaged and engaging example.

Following his international break-out I Am Love, Luca Guadagnino’s A Bigger Splash is a remake of Jacques Deray’s La Piscine; once again it explores conflicting desires and hidden dynamics within a small group of well-off people, but this time boasts a blistering performance from Ralph Fiennes as a motormouth rock impresario trying to win back his ex, played by Tilda Swinton. Guadagnino sat down with editor Nick James to discuss prioritising behaviour over drama in developing his scripts, and why he thinks auteur cinema is slowly morphing into narcissistic cinema.

Stepping out of cinema and into the world of TV, Eric Hynes ponders the seemingly unstoppable rise of long-form, episodic nonfiction, and particularly the case of ten-part, ten hour-plus Making a Murderer, the massively popular Netflix series that screened late last year. While the appetite for extended durations should be welcomed, does it represent a tailoring to the material’s essential shape, or merely an adaptation to the demands of new formats and presentation platforms?

We round off our features section this month with an interview with Jack Fisk, a colossus in the field of production design and recently nominated for a second Oscar for his work on The Revenant. Fisk looks back over a long career in which he’s worked with the likes of Lynch, de Palma and Paul Thomas Anderson, and discusses the challenges of of his preferred mode of working with the natural world, particularly nurtured during his long-term collaboration with Terrence Malick.

This month is also our annual obituary issue, where we bid a sad farewell to recently departed greats, who include Chantal Akerman, Haskell Wexler, Hara Setsuko and Wes Craven. 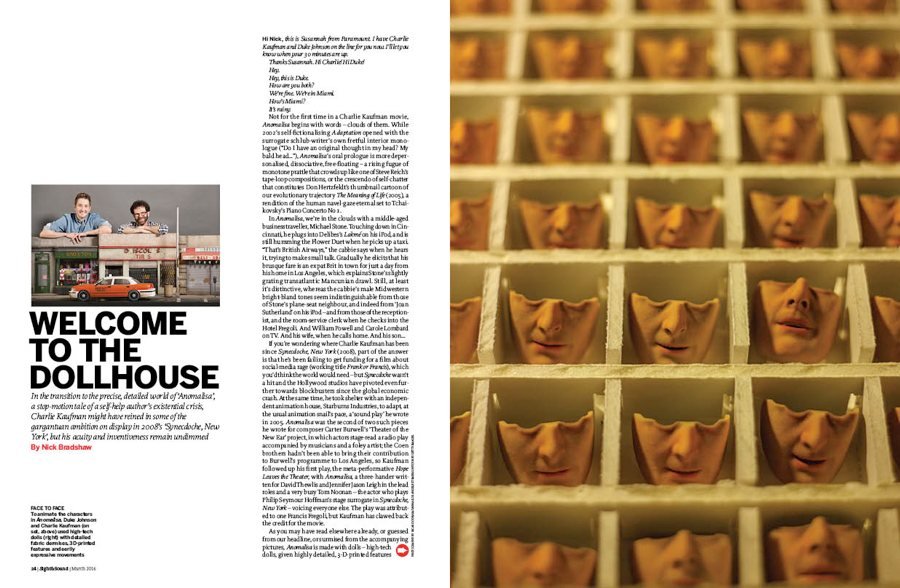 Welcome to the Dollhouse

In the transition to the precise, detailed world of Anomalisa, a stop-motion tale of a self-help author’s existential crisis, Charlie Kaufman might have reined in some of the gargantuan ambition on display in 2008’s Synecdoche, New York, but his acuity and inventiveness remain undimmed. By Nick Bradshaw.

Charlie Kaufman’s brilliant, funny, self-reflexive philosophical investigations trade on a neurotic vision of the self that is perpetually on the verge of catastrophic collapse. By Jonathan Romney. 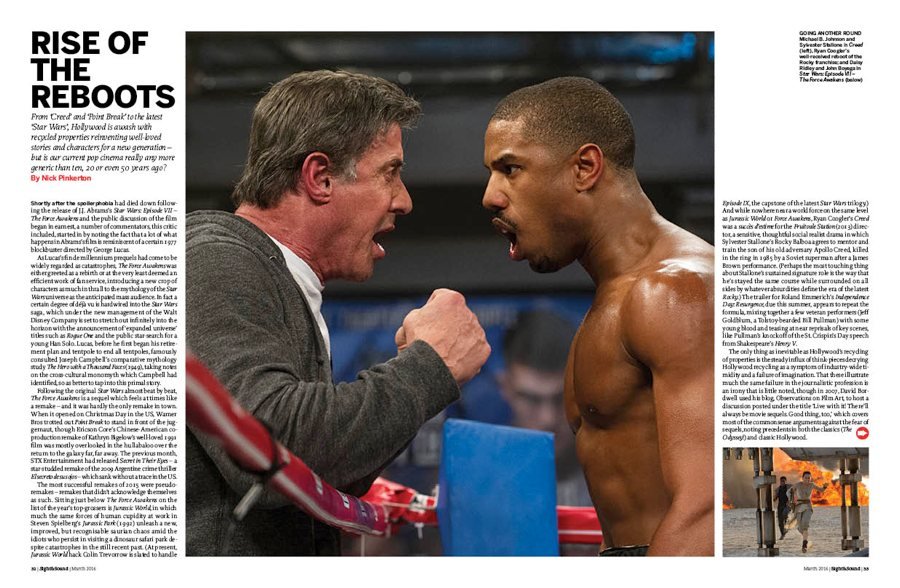 Rise of the Reboots

From Creed and Point Break to the latest Star Wars, Hollywood is awash with recycled properties reinventing well-loved stories and characters for a new generation – but is our current pop cinema really any more generic than ten, 20 or even 50 years ago? By Nick Pinkerton. 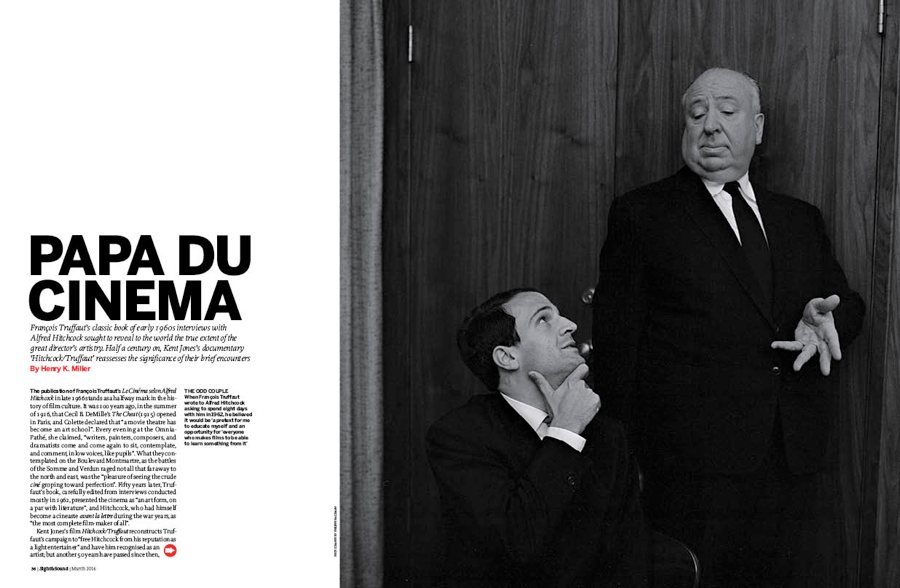 François Truffaut’s classic book of early 1960s interviews with Alfred Hitchcock sought to reveal to the world the true extent of the great director’s artistry. Half a century on, Kent Jones’s documentary Hitchcock/Truffaut reassesses the significance of their brief encounters. By Henry K. Miller. 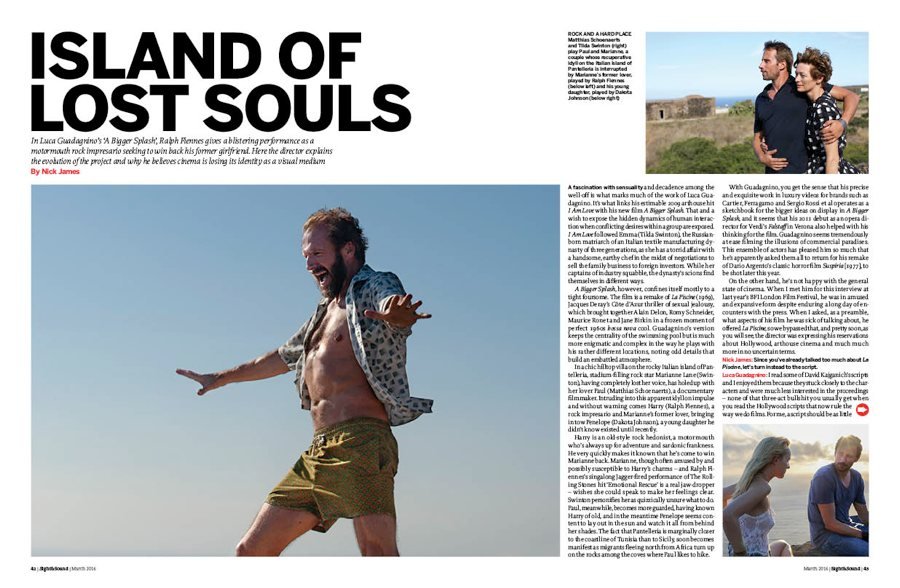 In Luca Guadagnino’s A Bigger Splash, Ralph Fiennes gives a blistering performance as a motormouth rock impresario seeking to win back his former girlfriend. Here the director explains the evolution of the project and why he believes cinema is losing its identity as a visual medium. By Nick James. 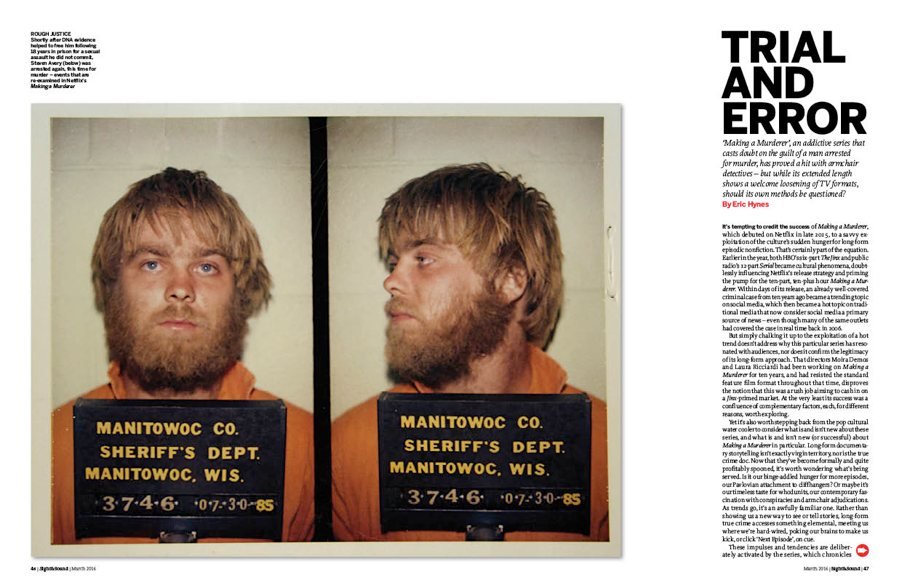 Making a Murderer, an addictive series that casts doubt on the guilt of a man arrested for murder, has proved a hit with armchair detectives – but while its extended length shows a welcome loosening of TV formats, should its own methods be questioned? By Eric Hynes. 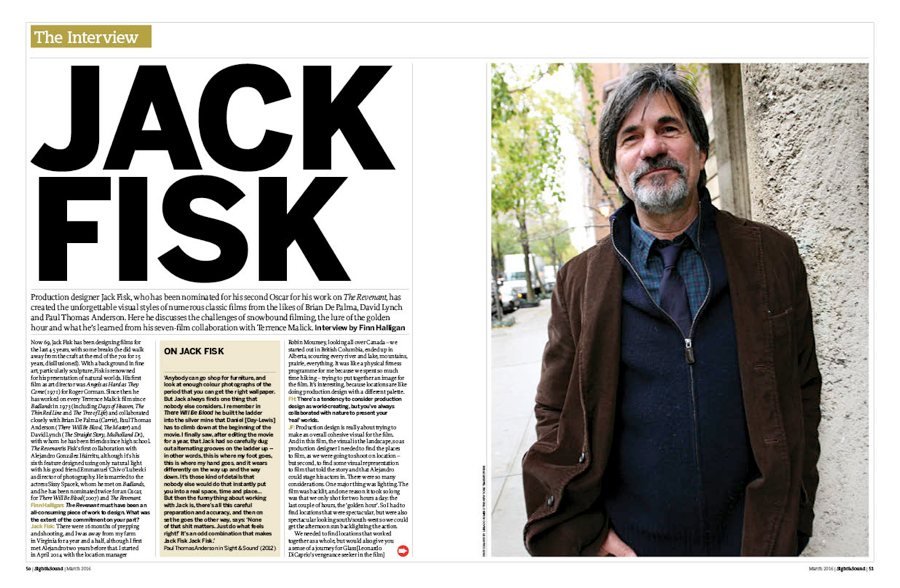 Production designer Jack Fisk, who has been nominated for his second Oscar for his work on The Revenant, has created the unforgettable visual styles of numerous classic films from the likes of Brian De Palma, David Lynch and Paul Thomas Anderson. Here he discusses the challenges of snowbound filming, the lure of the golden hour and what he’s learned from his seven-film collaboration with Terrence Malick. Interview by Finn Halligan. 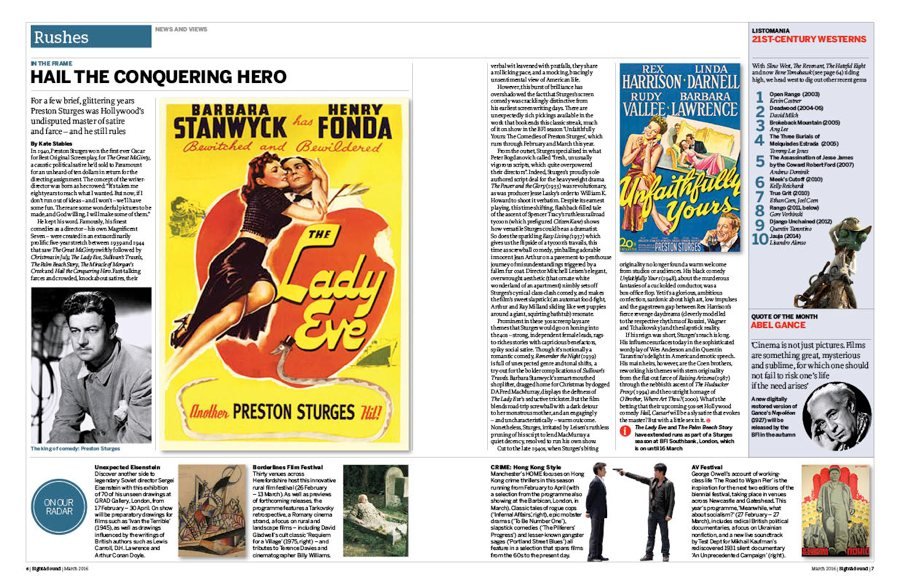 In the frame: Hail the conquering hero

For a few brief, glittering years Preston Sturges was Hollywood’s undisputed master of satire and farce – and he still rules. By Kate Stables.

The pram is emblematic of both the vulnerability of an infant, and the disproportionate physical and psychic space it occupies. By Hannah McGill.

Looking for romance with no strings attached? Wondering what gloves have got to do with it? You need our guide to puppet love. By Michael Brooke.

The director of The Survivalist talks about his post-apocalyptic vision of the future and the pressures of using the term ‘science fiction’. By Wendy Ide.

From The Wizard of Oz to the Before… trilogy, cinema is rife with movies that can be seen as constituting a genre of their own – walking films. By Mark Cousins. 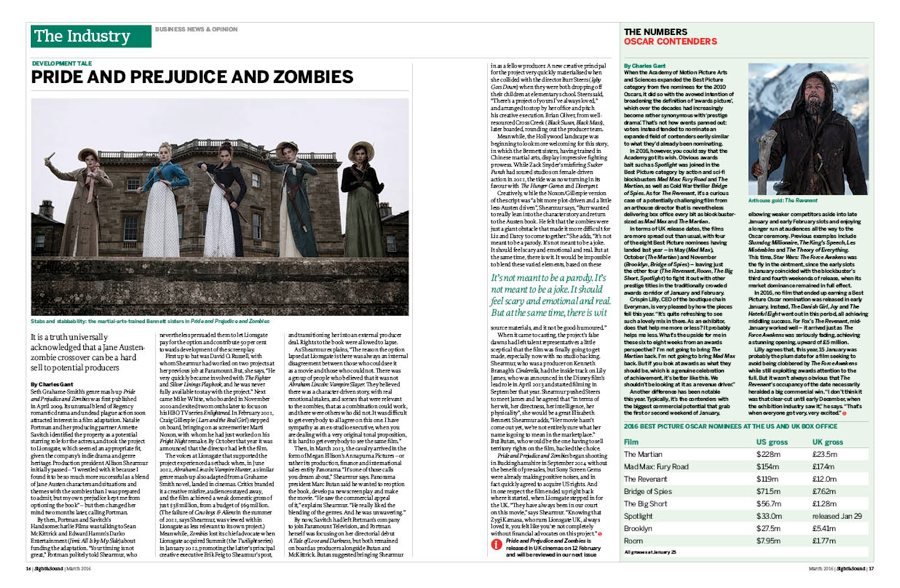 It is a truth universally acknowledged that a Jane Austen-zombie crossover can be a hard sell to potential producers. By Charles Gant. 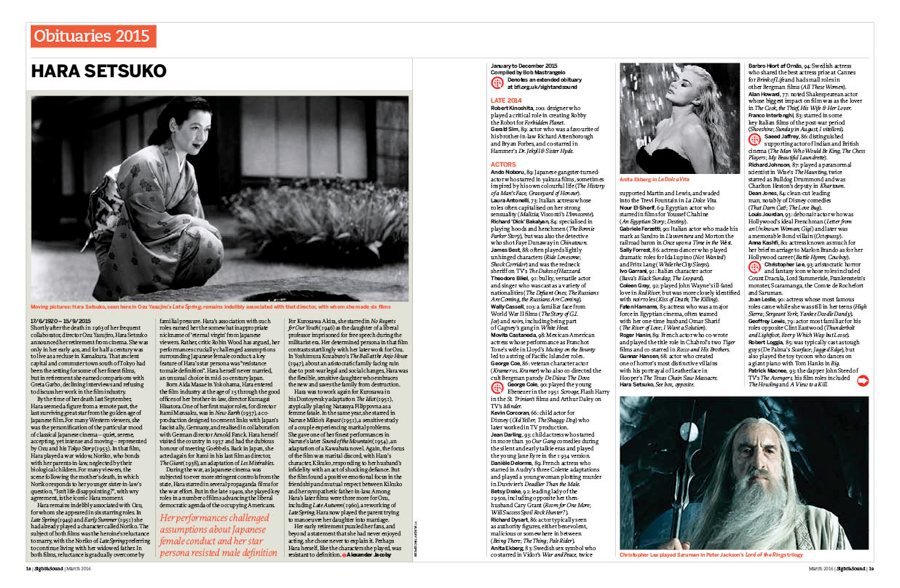 Compiled by Bob Mastrangelo, with the following extended entries: 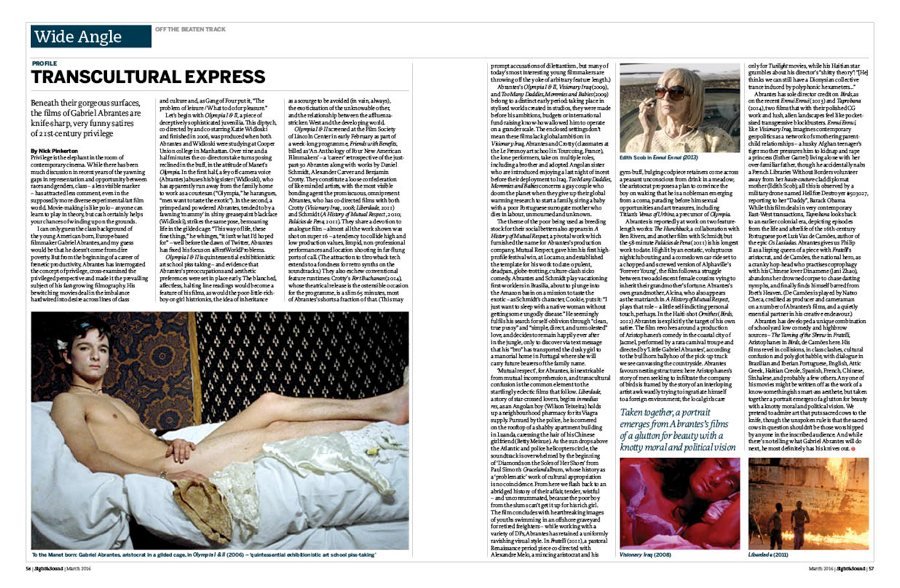 Beneath their gorgeous surfaces, the films of Gabriel Abrantes are knife-sharp, very funny satires of 21st-century privilege. By Nick Pinkerton.

Gangsta rap ought to make for great cinema – if only Hollywood could handle its contradictions and social realism. By Daniel Barrow.

If festivals and DVD reissues are any measure, silent film is becoming ever more popular. But can it pay its way? By Neil Brand.

If you regard every film as a kind of map, and are less interested in the stars than in the streets where they are shot, you may be a cine-tourist. By Roland-François Lack.

Through interviews, following clues and painstaking work in the archives, a lost Godard film has been restored to life. By Michael Witt. 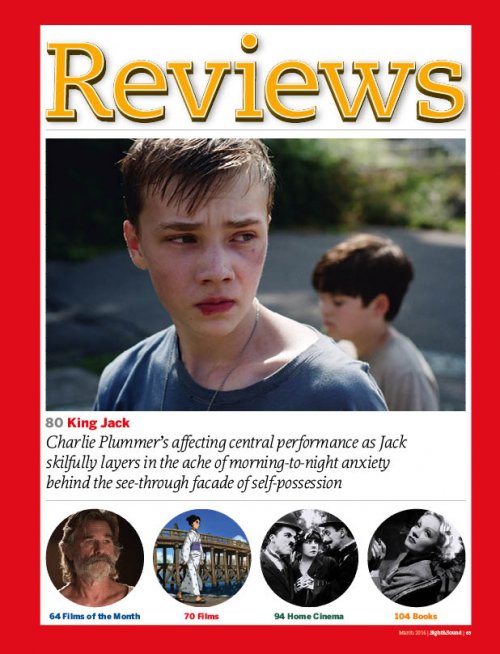 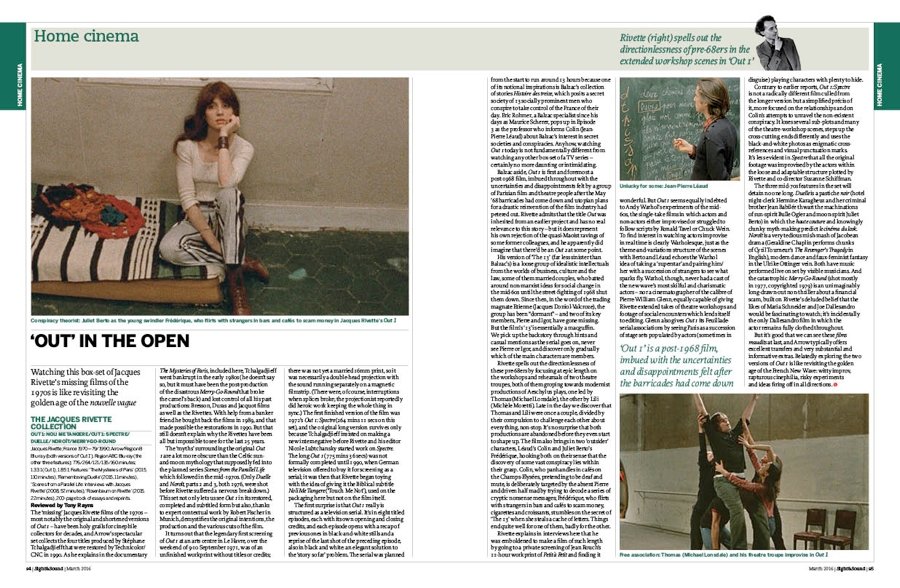 ‘Out’ in the open: The Jacques Rivette Collection

Watching this box-set of Jacques Rivette’s missing films of the 1970s is like revisiting the golden age of the nouvelle vague. By Tony Rayns.

Revival: Julien Duvivier in the Thirties

The films they made together in the 1930s earn Julien Duvivier and his star Harry Baur a place in the cinematic pantheon. Reviewed by Ginette Vincendeau.

Too daft for some, too explicit for most – but Curt McDowell’s cult curiosity is a riot if you’re on the right wavelength. By Michael Brooke.

Lost and found: The Secret Life of an American House Wife

Made just as the censors were loosening their grip, this comedy of marital manners reflects the new permissiveness of its era. By Anne Billson.

The Evolution of the British TV Documentary. Volume I: BBC 1952-67 reviewed by Robert Hanks 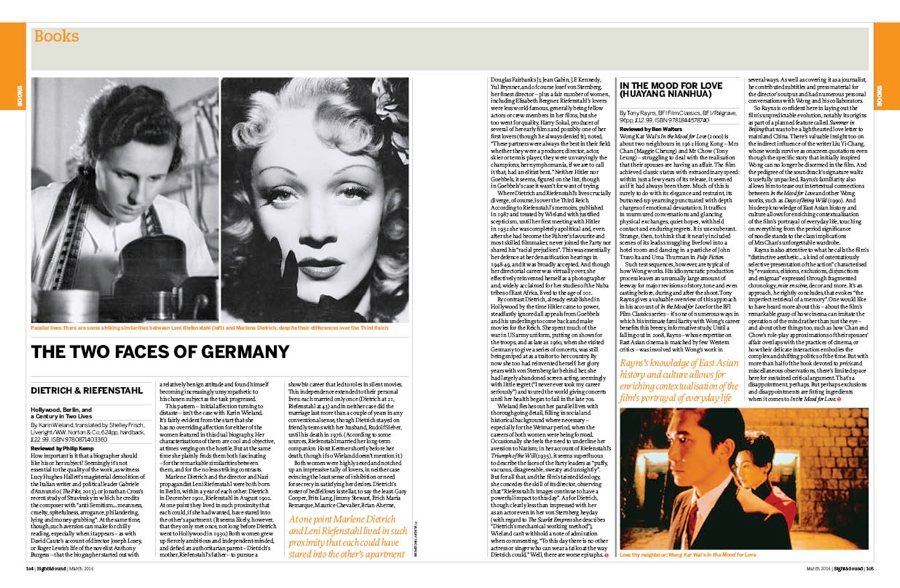 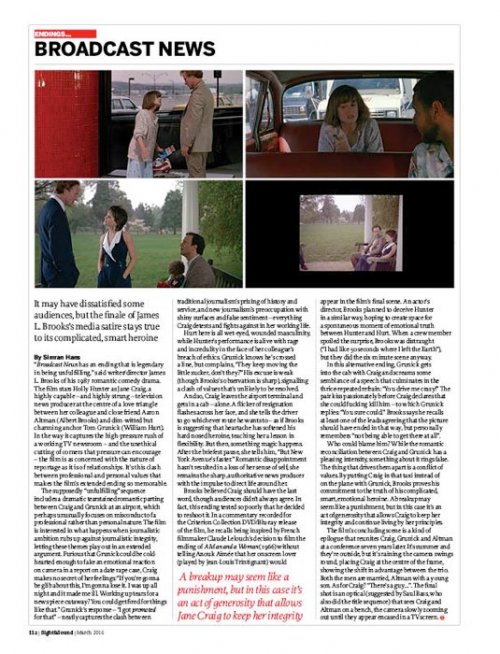 It may have dissatisfied some audiences, but the finale of James L. Brooks’s media satire stays true to its complicated, smart heroine. By Simran Hans.