Film of the week: Bone Tomahawk 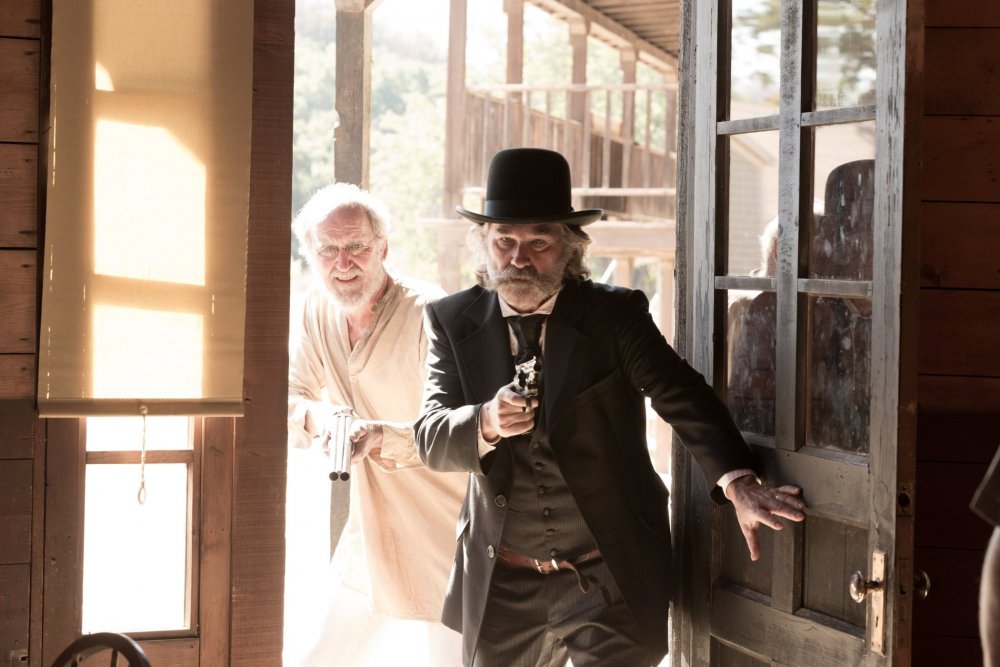 “Riders comin’ in one way, savages the other,” says Buddy (Sid Haig) to his bushwhacking partner Purvis (David Arquette), describing, in the opening sequence of Bone Tomahawk, the no man’s land they have entered between civilisation and the Stone Age, and also setting forth the tension that will come to dominate the film.

Figuring themselves beyond the reach of morality or the law, these two ruffians have just cut the throats of some sleeping cowboys out in the wilderness, but as they search through their victims’ Bibles for any valuables, one camper, not quite dead, manages to let off a gunshot, and the report attracts a group of passing horsemen (signified by the noise of hooves and the dust cloud of their approach). Fearing justice or a less formal reprisal, Purvis and Buddy flee to rockier terrain, where they stumble, transgressively, into a burial ground. There, Buddy is summarily arrowed and axed by a shadowy figure, while Purvis retreats, in his haste upsetting a stone from a cairn.

This prologue to S. Craig Zahler’s directorial debut sets out the thematic lines from which the subsequent story will divide or deviate. Like many an oater before it, Bone Tomahawk explores western history and identity across the fluid boundaries between criminality and the law, savagery and progress, sacrilege and faith. 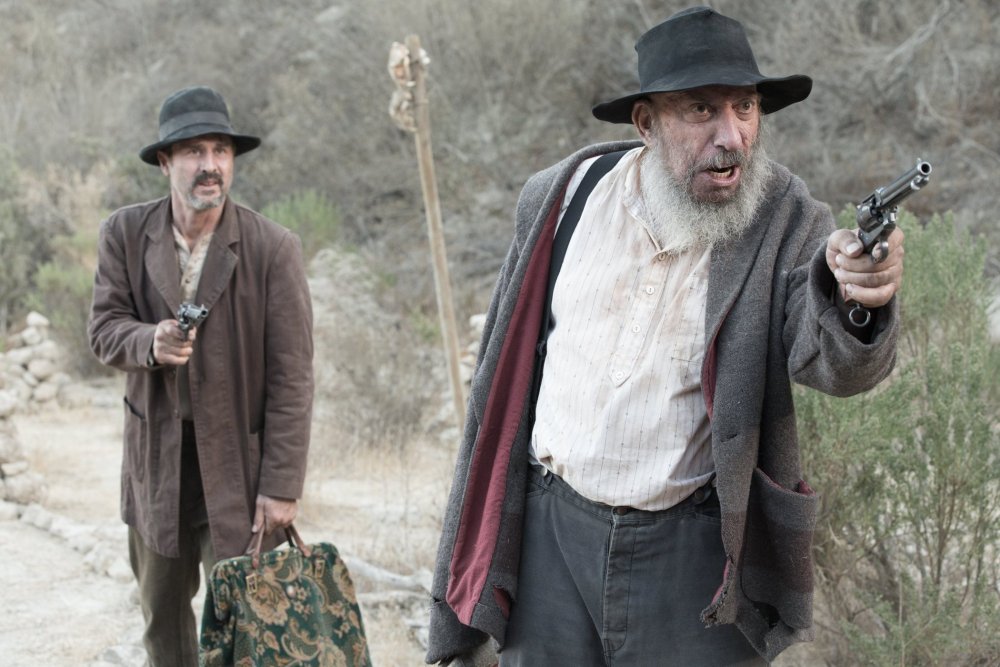 There is no question that, in comparison with the dark place from which Purvis has just escaped, the small and significantly named town of Bright Hope where he ends up 11 days later is, as local sheriff Franklin Hunt (Kurt Russell) says, “civilised” – but here civilisation is relative. The welcome that Purvis, though unarmed, receives in Bright Hope is to be shot in the leg by Hunt (a habitual leg shooter) and jailed – the non-fatal injury only so that Purvis can live long enough to be hanged (in this respect, Hunt resembles the character recently played by Russell in Quentin Tarantino’s The Hateful Eight). Justice, Bright Hope-style, is still rather rough around the edges – and what’s more, Purvis has unknowingly brought a bit of savagery along with him into town, in the form of a vengeful raiding party. After murdering a black stable hand, this gang of natives steals a string of horses and abducts from the jailhouse not just Purvis but also the sheriff’s deputy Nick (Evan Jonigkeit) and the doctor’s assistant Samantha O’Dwyer (Lili Simmons).

As Hunt leads a rescue party comprising anecdotage-afflicted ‘back-up deputy’ Chicory (Richard Jenkins), Samantha’s recently lamed cowboy husband Arthur (Patrick Wilson) and experienced trekker John Brooder (Matthew Fox), Bone Tomahawk appears to be following a trail already blazed by John Ford’s The Searchers (1956). Certainly the Indian-hating bigotry of John Wayne’s Ethan Edwards is preserved in the character of the trigger-happy Brooder: having witnessed as a ten-year-old the murder of his mother and sister by natives, he has been indiscriminately killing them – women and children included – ever since.

His xenophobia extends beyond the native population: when a pair of strangers, armed only with crucifixes, approach the camp at night, Brooder doesn’t hesitate to gun them down in cold blood. “Mr Brooder just educated two Mexicans on the meaning of Manifest Destiny,” observes Chicory, wryly framing his companion’s actions in the ideological terms of American expansionism. Brooder insists that the two strangers were “scouts for a raiding party” – and the next night the camp is indeed infiltrated by thieving bushwhackers – but the question remains whether Brooder has crossed yet another of the film’s moral lines (as Chicory expressly believes) and in so doing stymied the posse’s progress. 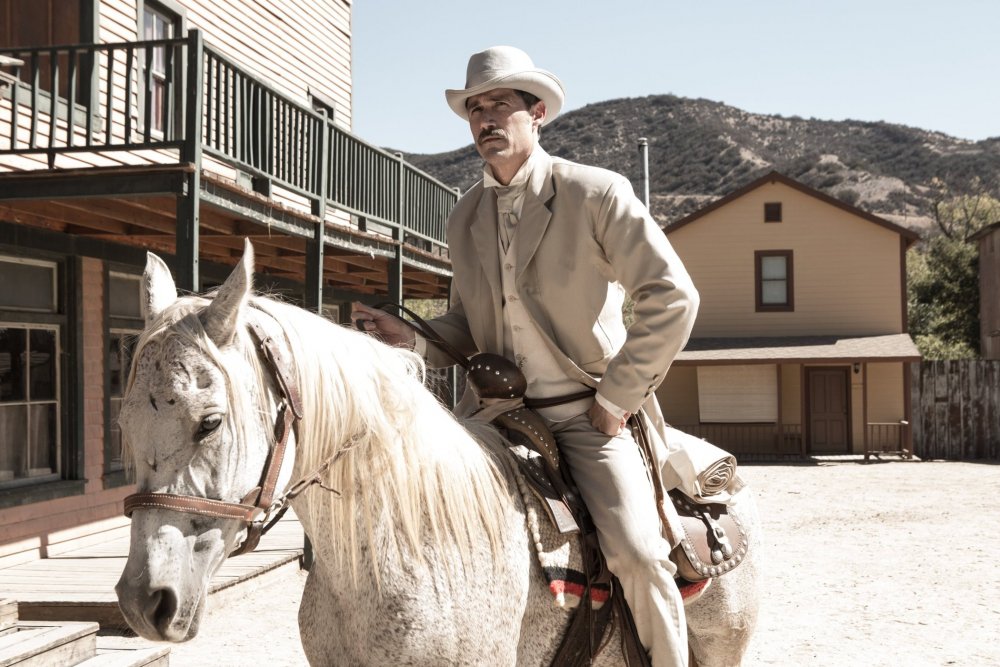 Brooder’s racist perspective is not, of course, the film’s, and it is offset by ‘The Professor’ (Zahn McClarnon), a dapper Native American resident of Bright Hope who is presented as a fount of local knowledge in a desert of colonial ignorance. Introducing terms that even the town mayor can’t spell, such as ‘troglodyte’, the Professor is quick to distinguish Hunt and co’s quarry – designated a “spoilt bloodline of inbred animals that rape and eat their own mothers” – as “something else entirely” from the Indians of his own kind. The savage Other in Bone Tomahawk is no ordinary native but a mythic monster that can be safely demonised by the filmmakers without fear of offending any real tribe’s sensibilities. These body-modifying, anthropophagous troglodytes are a convenient repository of straightforwardly bestial atavism against which all the other characters’ more or less human qualities can be measured.

“This is why frontier life is so difficult. Not because of the Indians or the elements, but because of the idiots. You’re idiots!” This line, addressed late in the film by an indignant Samantha to her male would-be rescuers, highlights the absurdity of riders deprived of their horses and depending for their salvation on a man so crippled that he cannot walk. Branded upon Bone Tomahawk’s oater tropes is cluster-bungling of a decidedly Coen-esque stamp, as men’s quirks and foibles, as well as the more mundane aspects of life on the trail, are milked for sly comedy. The effect is greatly assisted by the verbal wit of Zahler’s screenplay, with one mannered zinger following fast on another (Zahler also co-wrote the score, with Jeff Herriott).

Yet as with his 2013 novel Wraiths of the Broken Land, Zahler is making extraterritorial incursions into genres of yet another kind. There is a hint of this in the opening scene, with the casting of horror veterans Haig (Spider Baby, House of 1000 Corpses) and Arquette (the Scream series) in the roles of the outlaw cutthroats. And by the time Hunt’s posse has brought things full circle, entering the heart of darkness in the place where the film began, there will be blood, brutality and gore of a kind that would make Sam Peckinpah or even Giulio Questi blush, no matter how much the good-natured humour jarringly abides to maximise its own – and the horror’s – edgy impact. 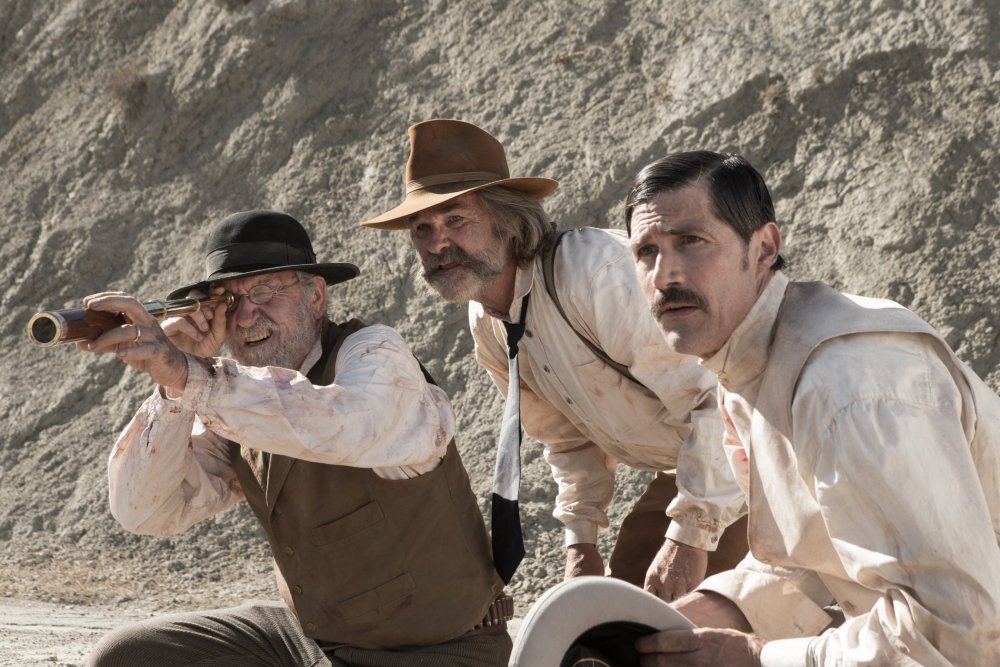 Bone Tomahawk belongs to the mixed mode known as ‘weird west’. In much the same way that Alex Turner’s Dead Birds (2004), Grant Harvey’s Ginger Snaps Back (2004), J.T. Petty’s The Burrowers (2008) and John Geddes’s Exit Humanity (2011) respectively – and retrospectively – relocate cinema’s ghosts, werewolves, monsters and zombies in America’s pre-cinematic history, or that The Hateful Eight might be regarded as a postmodern (p)refiguring of John Carpenter’s The Thing (1982), Zahler’s film too, when viewed in terms of strict historical chronology, anticipates and cannibalises the violent culture clash of Wes Craven’s The Hills Have Eyes (1977), set over a century later. Here horror takes pioneering form in oater territories, western revisionism looks forward to genres new, and the outrages and atrocities of the 20th century and beyond can have their origins traced back to the very foundations of the Old West. This free passage between past and present is what lends the film its epic status, no less than the wide-open vistas.

When, in the end, one of Hunt’s rescue party restores to safer ground a white stone that he had raised as the only weapon left to him in cannibal country, he is not just marking a re-emergence from nightmarish barbarity to striving humanity, but also rewriting the frontier, both between Bright Hope and the troglodytes’ ‘Valley of Starving Men’, and between one genre and another – in a funny (strange and haha) western landscape where it is all too easy to get pillaged, consumed or lost.

Related to Film of the week: Bone Tomahawk