Into deep space with Claire Denis and Robert Pattinson for High Life. Plus a revisit to the fever and ferment of Germany’s Weimar-era cinema, and a lavish hat tip to László Nemes’s Hapsburg noir Sunset.

In print and digital from 7 May 2019. Get the digital edition, buy a print edition or . 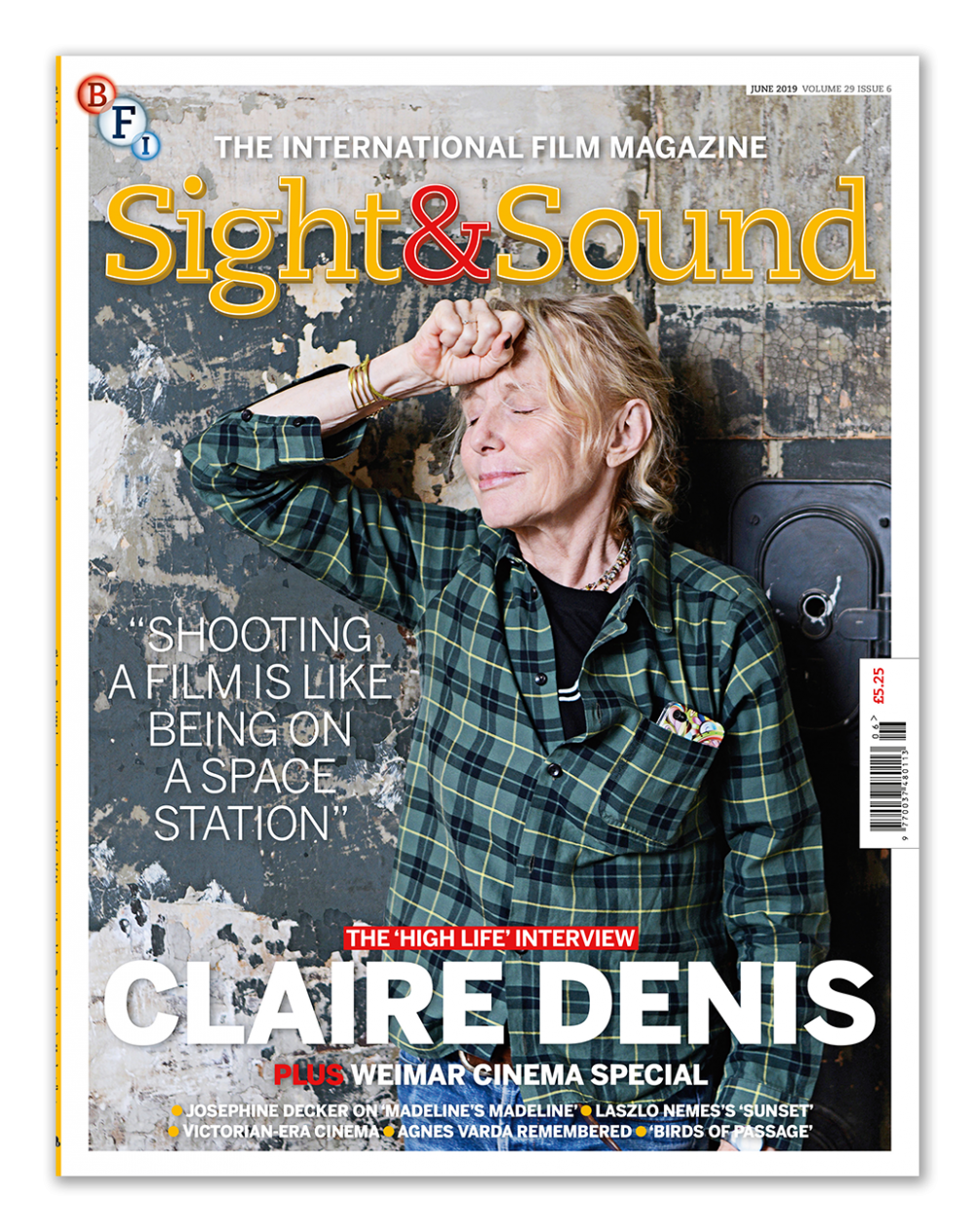 A new Claire Denis film is always something to shout about, but the fact that High Life is the celebrated French director’s first foray into science-fiction and her debut in the English-language undoubtedly supply an added piquancy.

Posted to subscribers and available digitally 7 May

On UK newsstands 9 May

High Life stars Robert Pattinson and Juliette Binoche among a motley ensemble of death-row prisoners sent on a one-way voyage to a distant galaxy to harvest energy from black holes. As escalating tensions and isolation take their toll, the crew members are forced to confront the most primal questions of existence. As ever with Denis, the images are hypnotically riveting, the mood unsettling and strange, the structure elliptical and time-bending. Well into her seventies, this most adventurous of directors is still resisting categorisation and taking risks. She spoke to Pamela Hutchinson about scripts, sets, stars and sci-fi.

Let your mind wander across the whole of cinema history and it’s hard to come up with a greater cluster of talents than those whose careers were kickstarted during the Weimar era in Germany – Lang, Lubitsch, Murnau, Ophuls, Siodmak, Wilder, to name but a few. To mark a major season on Weimar cinema at BFI Southbank, Sight & Sound undertakes a deep-dive survey of this pregnant cultural moment, one of “feverish experimentation and constant debate in which a multiplicity of voices can be heard”, according to writer and curator Margaret Deriaz. That multiplicity includes not only some of the lesser-known directors in addition to the canonical films and figures, but also the often overlooked Jewish dimension in this brilliant constellation of talent.

Furthermore, as editor Nick James notes, Weimar also saw the emergence of a new breed of critical writing about the art of cinema, from figures such as Walter Benjamin, Theodor Adorno, Siegfried Kracauer, Lotte Eisner and Bela Balazs.

The short hop from Germany to Hungary yields Sunset, the spellbinding new film from László Nemes, whose previous feature Son of Saul was a controversial addition to the ever-growing cinema of the Holocaust. The new film takes place in Budapest in the last days of the Austro-Hungarian empire, where a young woman looks for her brother, rumoured to be leader of an underground insurgency. Nemes adopts a similar virtuoso technique to his earlier film, this time an intricately byzantine narrative which may or may not take place all in one character’s head. Jonathan Romney seeks clarification from director Nemes and lead actor Juli Jakab.

In our Rushes section there’s a tribute to much-missed Agnès Varda by collaborators and fellow directors Mia Hansen-Løve, Marc Isaacs, Heddy Honigmann and Joanna Bruzdowicz, coinciding with the release of Varda’s final film in July, Varda by Agnes.

In the same section Jemma Desai interviews the massively talented American director Josephine Decker, whose beguiling new film Madeline’s Madeline is a “febrile, psychologically complex journey” into a troubled psyche of the eponymous protagonist, who is spending a summer with an experimental theatre troupe. “It becomes apparent that the internal exploration required of this vulnerable teen might have profound psychological consequences for her.”

In the Wide Angle section, BFI curator Bryony Dixon surveys Victorian cinema, the very earliest films made in the years 1896-1901, “one of the most exciting, exuberant times in the development of moving pictures”, as Dixon puts it; the entire corpus from this period is now available to view on the BFI Player, the ideal context by virtue of the films’ primary function to attract attention in a very short timespan. Nine films are highlighted for special appetite-whetting attention, including one, The Kiss in the Tunnel by G.A. Smith, which was revolutionary in developing the notion of continuity.

In the other piece in Wide Angle, Clara Bradbury-Rance ponders the much greater visibility of lesbians onscreen in recent cinema and speculates what the gains and losses might be. “Many spectators yearn for something beyond the false choice of pathologisation or erasure that characterised 20th century lesbian cinema’, but what kinds of representations of lesbian identity and sexuality have the likes of Yorgos Lanthimos, Abdellatif Kechiche, Todd Haynes and Maryam Keshavarz, among numerous others, been serving up? 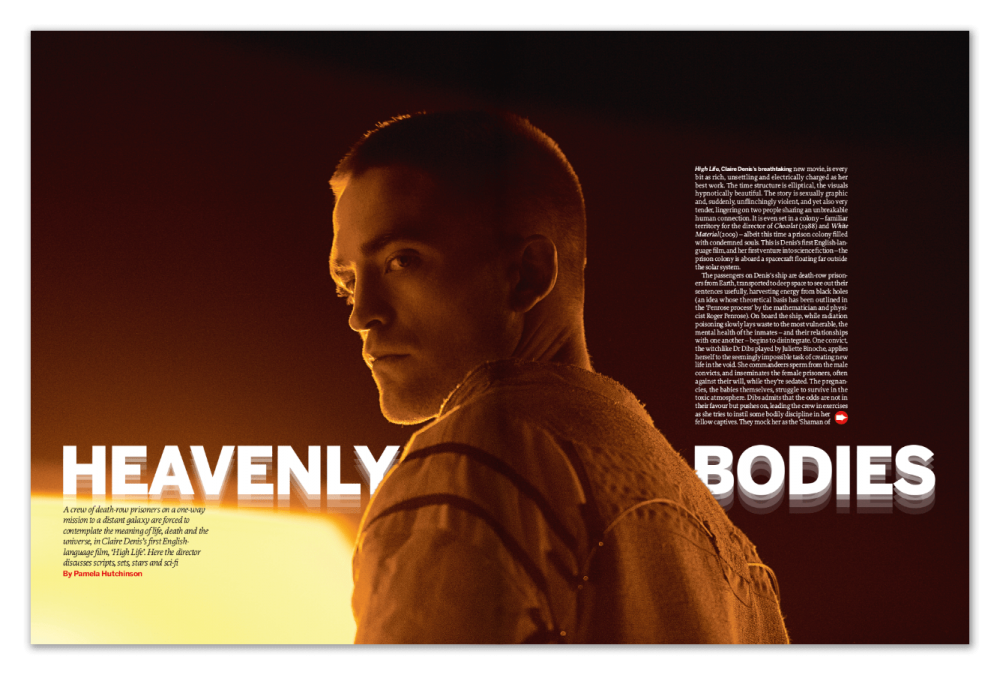 A crew of death-row prisoners on a one-way mission to a distant galaxy are forced to contemplate the meaning of life, death and the universe in Claire Denis’s first English-language film, High Life. Here the director discusses scripts, sets, stars and sci-fi. By Pamela Hutchinson. 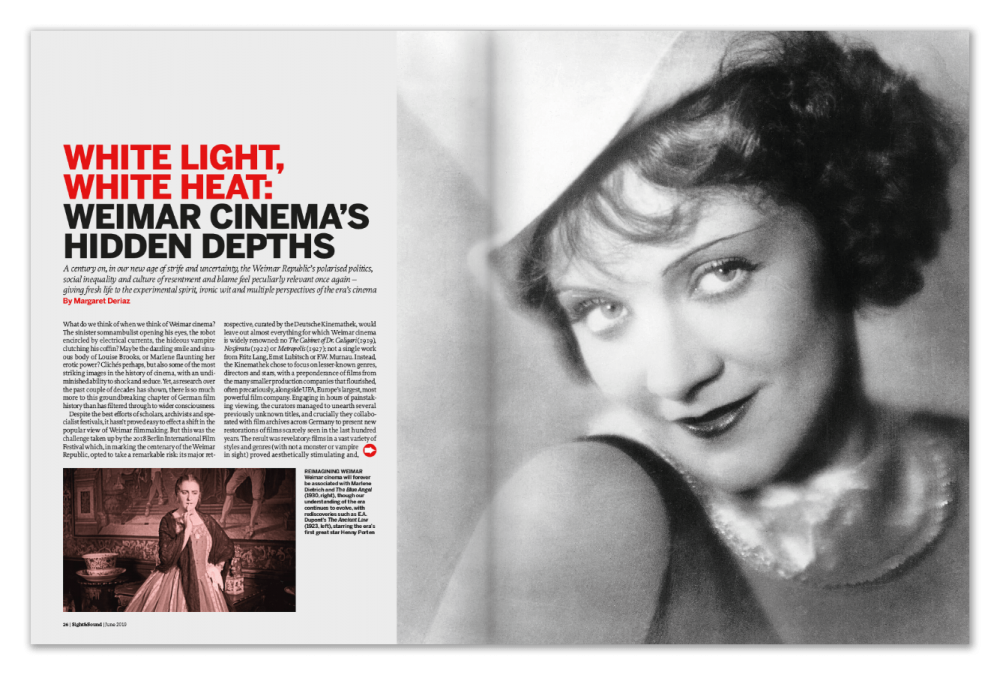 A century on, in our new age of strife and uncertainty, the Weimar Republic’s polarised politics, social inequality and culture of resentment and blame feel peculiarly relevant once again – giving fresh life to the experimental spirit, ironic wit and multiple perspectives of the era’s cinema. By Margaret Deriaz.

The fact that so many of the brilliant, critical figures of Weimar cinema were Jewish – from Ernst Lubitsch and Billy Wilder to Robert Wiene and the Siodmak brothers – has been largely overlooked in traditional histories. It’s time to give this crucial aspect its due. By Joel Finler.

A key aspect of the formidable intellectual culture that developed in Germany amid the social and political turmoil in the years after World War was the emergence of a new breed of critical writing about the art of the cinema. By Nick James.

+ The stars of Weimar cinema

+ History of the Weimar Republic 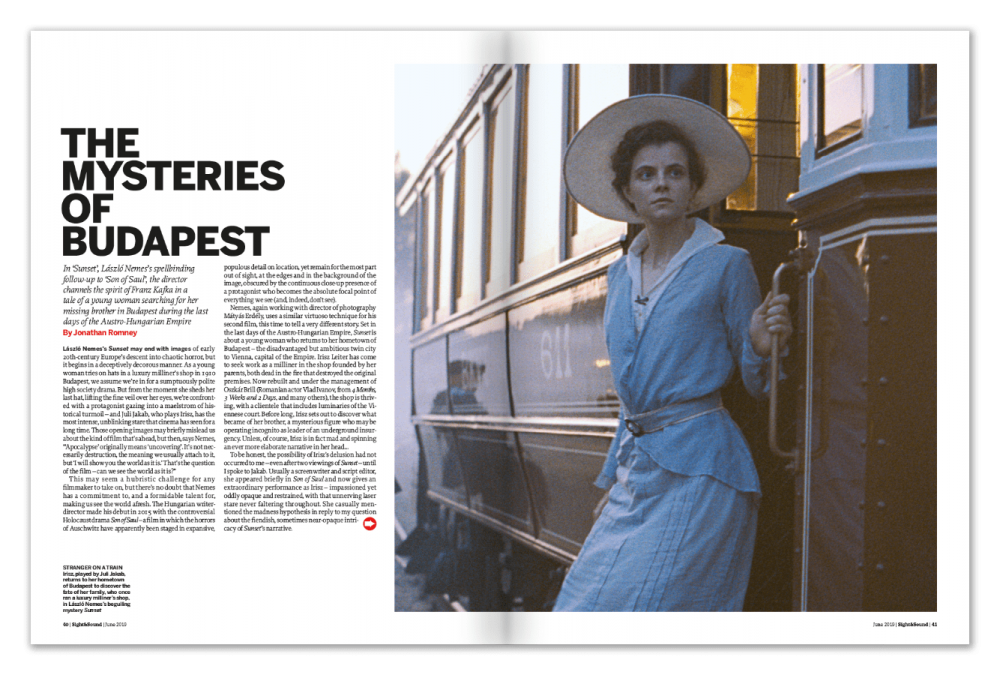 The Mysteries of Budapest

In Sunset, László Neme’s spellbinding follow-up to Son of Saul, the director channels the spirit of Franz Kafka in a tale of a young woman searching for her missing brother in Budapest during the last days of the Austro-Hungarian Empire. By Jonathan Romney.

The weight of cinema, from Weimar to Brexit 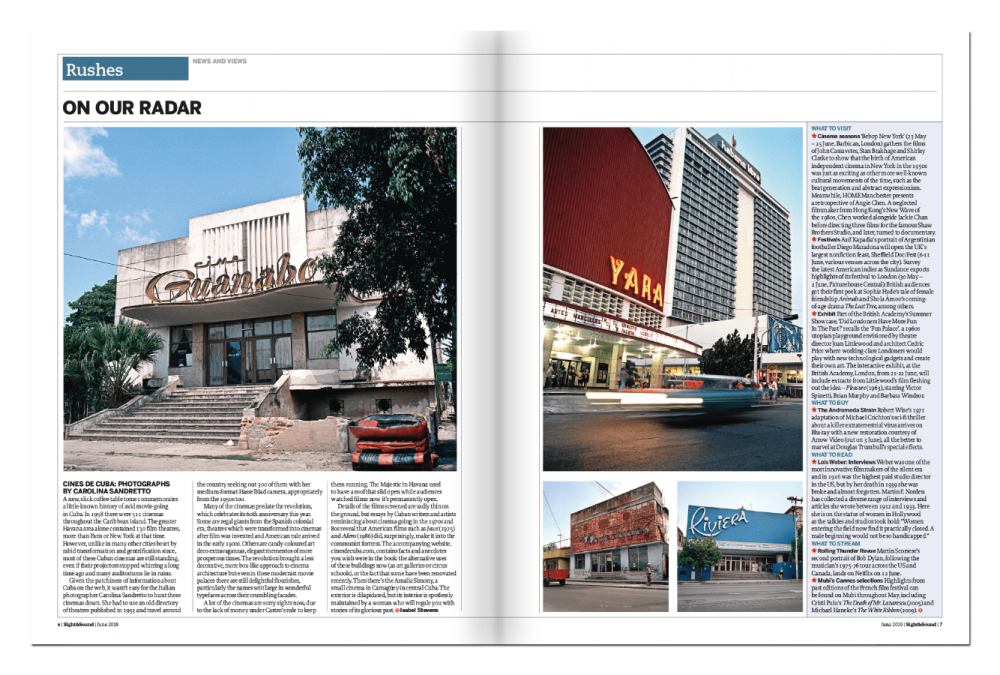 A photographer’s hunt for the lost cinemas of Cuba, plus what to visit, buy, read and stream.

An art deco treasure from the golden age offers a rich diet of little-seen reruns and indie gems for The Crying Game and Greta director Neil Jordan.

The numbers: The White Crow and culture biopics

A trio of successful films celebrating the lives of famous artistic figures show the market for high culture at the UK box office. By Charles Gant.

Collaborators and fellow filmmakers remember the inimitable wit, charm and talents of the late, great artist and director. 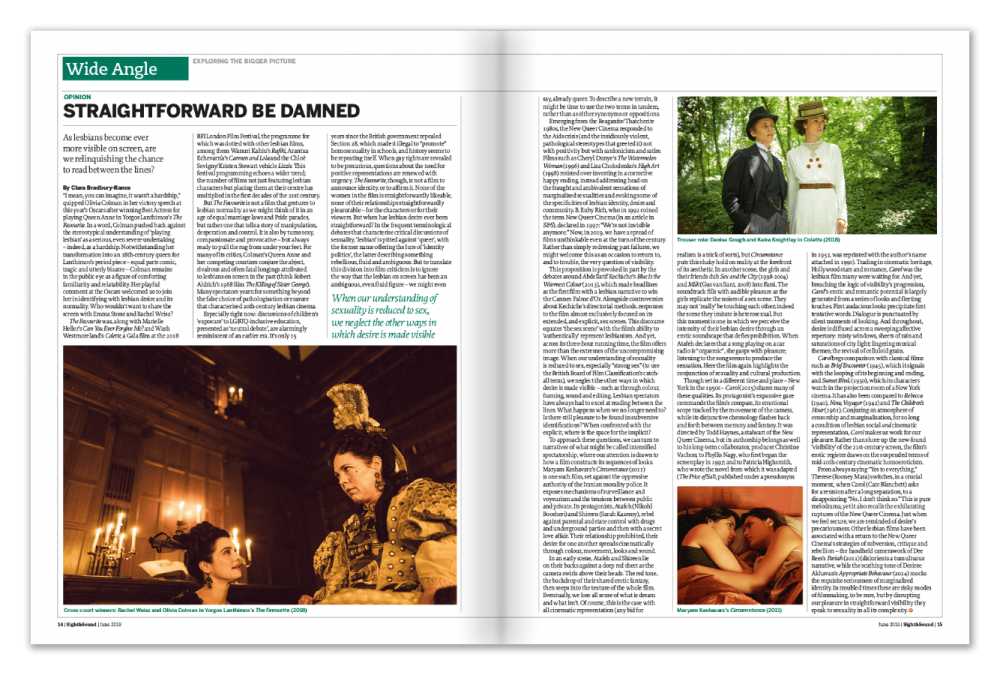 As lesbians become ever more visible on screen, are we relinquishing the chance to read between the lines? By Clara Bradbury-Rance.

A BFI project aims to put the very earliest moving pictures in reach of the public – and to show how sophisticated they were. By Bryony Dixon. 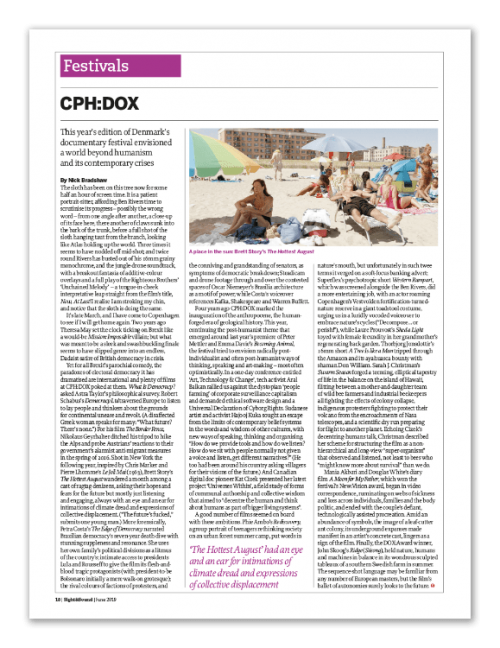 This year’s edition of Denmark’s documentary festival envisioned a world beyond humanism and its contemporary crises. By Nick Bradshaw.

Birds of Passage
Diamantino
John McEnroe: In the Realm of Perfection 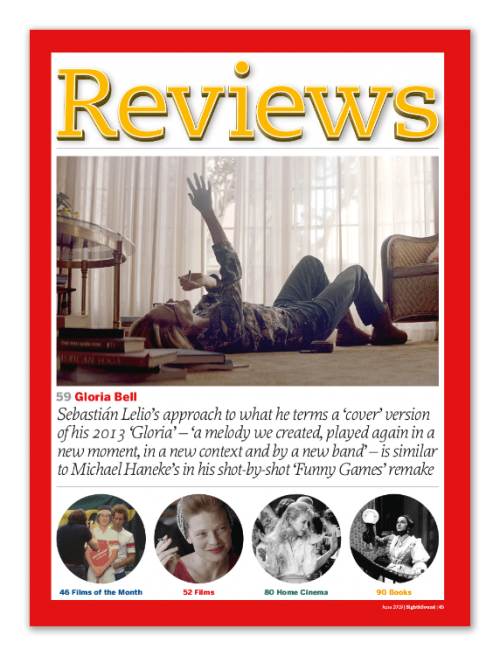 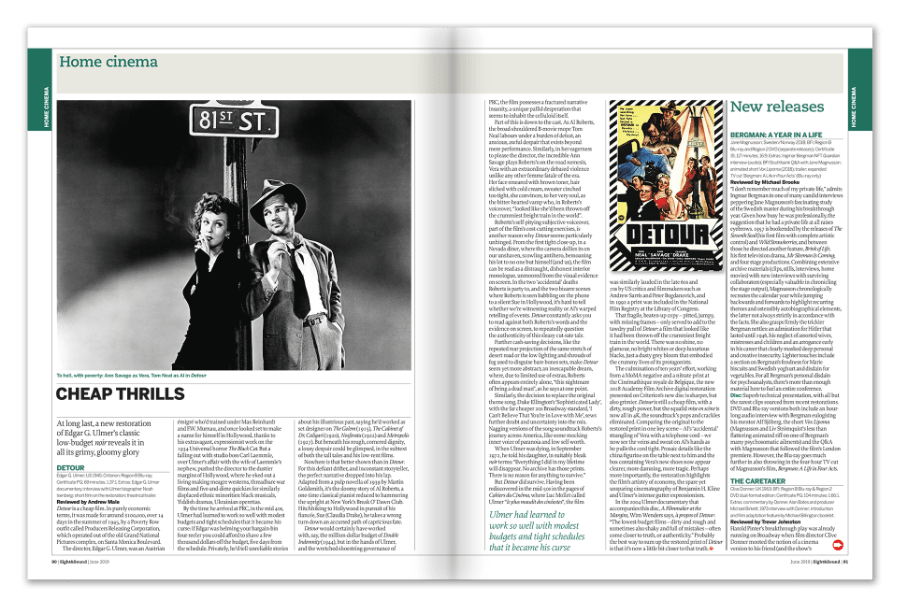 At long last, a new restoration of Edgar G. Ulmer’s classic low-budget noir reveals it in all its grimy, gloomy glory. Reviewed by Andrew Male.

Revival: Shakespeare Wallah and Heat and Dust/Autobiography of a Princess

A trio of lovingly restored works by Ismail Merchant and James Ivory explore Western attitudes to India past and present. Reviewed by Philip Kemp.

Robert Hanks on Patrica Routledge in Victoria Regina; plus The Likely Lads. 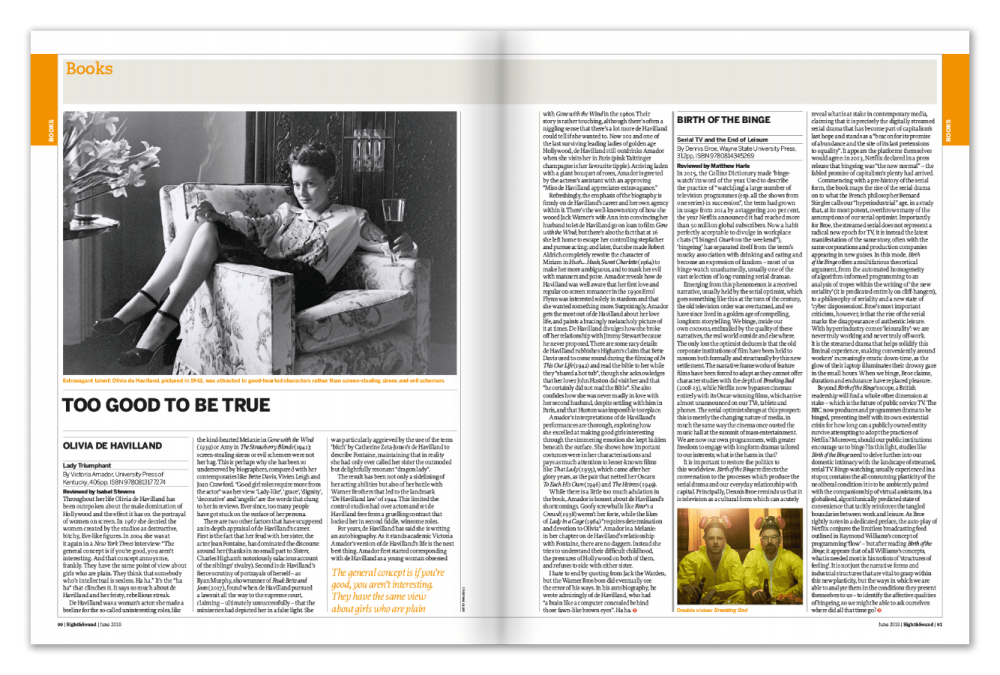 Birth of the Binge: Serial TV and the End of Leisure by Dennis Broe (Wayne State University Press) reviewed by Matthew Harle

Hollywood has lost its provactive edge, so Netflix picks up the slack

Has Kubrick’s graphical genius been overblown?

Making connections in The Sisters Brothers 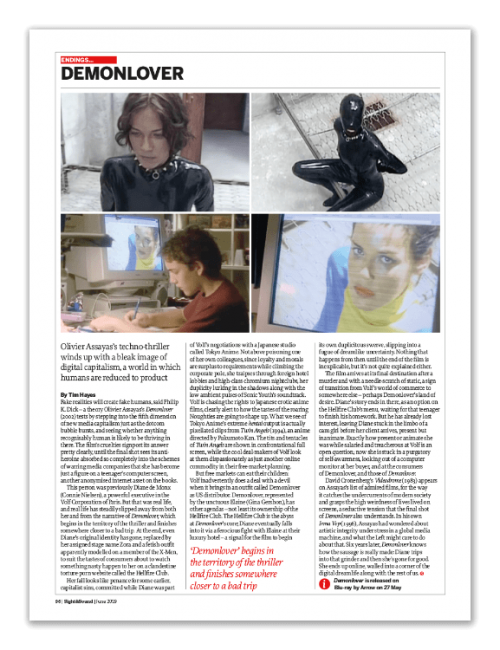 Olivier Assayas’s techno-thriller winds up with a bleak image of digital capitalism, a world in which humans are reduced to product. By Tim Hayes.