Victim, femme fatale, sexual object… just what is it that fascinates filmmakers about the blonde? 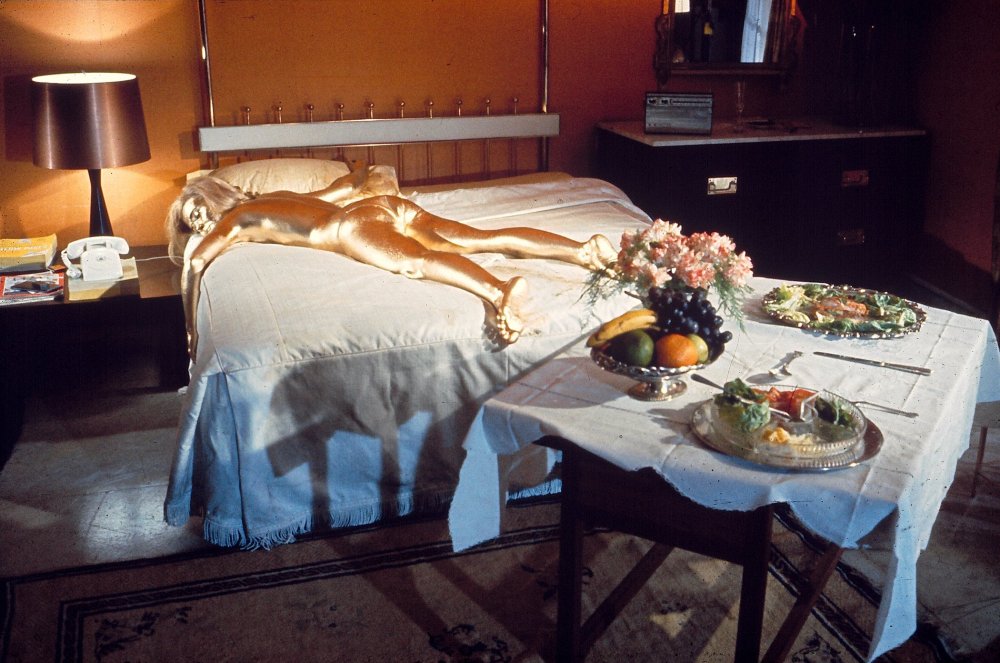 When Daniel Craig was cast as the Bond replacement for Pierce Brosnan, one of the most peculiar objections to the choice was that he was blonde: how could the much-loved epitome of callous and suave masculinity be played by a fair-haired actor? Although this seemed a superficial concern (and one that ignored some of Roger Moore’s blonder moments) it perhaps reveals the association of the blonde onscreen with ‘the fairer sex’. Sean Connery’s brooding dark Bond playing opposite the golden blondes of Ursula Andress, Daniela Bianchi and Shirley Eaton seems to epitomise the rough masculinity and glamorous femininity on which the Bond tradition is based.

Glamour, however, is only one facet of the blonde’s cinematic incarnation, as explored in the BFI’s Blonde Crazy season this March. The Bond blondes are useful indicators of other facets: Jill Masterson becomes the ultimate golden girl when her vulnerability is revealed by the all-over paint-job in Goldfinger (1964); Mary Goodnight is a ditsy liability in The Man with the Golden Gun (1974); Kara Milovy is chaste and refined in The Living Daylights (1987); Miranda Frost icy and treacherous in Die Another Day (2002). This array of characteristics reflects some of the attributes of the cinematic blonde, but also the fact that blondeness itself is not a concept with a single defining trait, other than hair colour. Dumb blondes, bombshells, angels and ice queens have all been embodied by fair-haired females; many of them have featured several of these characteristics at once.

Although often dismissed as having a singular identity, the Hitchcock blondes are a range of character types and personalities. Marion Crane’s worldly office girl in Psycho (1960) is very different from Melanie Daniels’ playful socialite in The Birds (1963), as is To Catch a Thief’s (1955) witty and flirtatious Francie Stevens from the sexy and dangerous Eve Kendall (North By Northwest, 1959). These women may all be beautiful and blonde, but that is the extent of what they have in common. Perhaps the description of these characters – and actresses – as ‘Hitchcock blondes’ is consistent with the tendency to oversimplify the concept of the blonde in cinema generally. 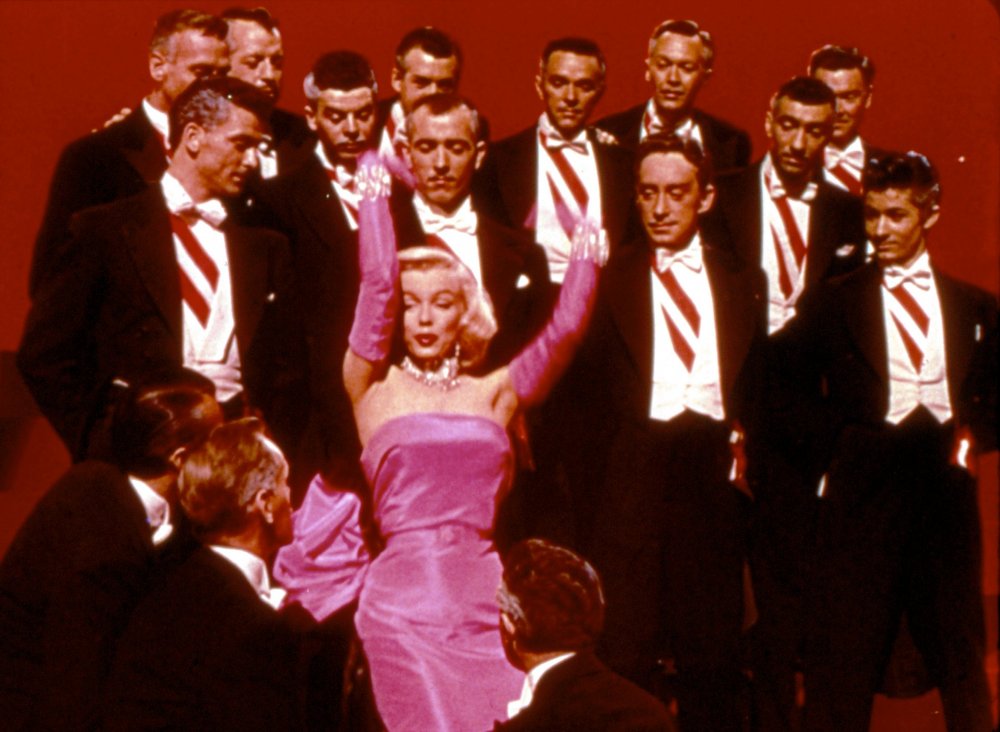 There is no doubt that the blondeness of Françoise in Eric Rohmer’s Ma nuit chez Maud (1969) is integral to Jean-Louis’ view of her as angelic, in contrast to the dark-haired woman of the world Maud. The ending of the film, however, reveals Françoise to be the woman who stole Maud’s husband, thereby exposing Jean-Louis’s naivety and his willingness to be deceived. This illustrates two other aspects of the ways in which the blonde functions in film – in opposition to a brunette, and as a tool to demonstrate a man’s susceptibility. In Double Indemnity (1944), although Walter Kneff’s attention is grabbed by the sight of an ankle bracelet, it is Phyllis’ platinum crowning glory that sees him melt into a pool of lust and distractedness, enabling her scheme to play out just as she had planned.

The blonde in competition with a sensible, knowing brunette activates the most basic fairytale imagery epitomised by the Grimm Brothers’s Snow White and Rose Red. It is the blonde Snow White who marries the prince, while her dark-haired sister has to make do with his brother. Just as Melanie Daniels wins the hand of Mitch Brenner in The Birds, while schoolteacher Annie Hayworth can only watch until pecked to death by crows, so Basic Instinct’s (1992) Catherine Trammel secures the devotion of Detective Nick Curran as he is manipulated into shooting brunette psychologist Beth Garner. And Basic Instinct, included in the Blonde Crazy season, features an iconic moment of blonde power: when Sharon Stone crosses and uncrosses her legs in front of a panel of sweaty, ogling police detectives, it is actually a very conventional instance of the show-stopping effect the blonde has onscreen. Like Marilyn Monroe over the subway grating in The Seven Year Itch (1955), the similarly white-clad Stone draws attention to her genitalia to confront her male audience with the source of their fascination.

At the other end of the time period covered by the season, Red Dust (1932) also resonates across the decades. Here, the women in competition are platinum blonde Jean Harlow as the sassy and streetwise Vantine and the refined brunette Mary Astor as Barbara Willis. The prize they compete over is Clark Gable, the big white hunter, who remains the hero in the John Ford remake, Mogambo (1953), almost 20 years later. Though in the latter film the women are still in their early twenties, the colour coding is reversed, triggering a different set of stereotypes. Showgirl Eloise ‘Honeybear’ Kelly is played by the earthy, wisecracking Ava Gardner; the inexperienced, repressed Linda Nordley by Grace Kelly, complete with white gloves. 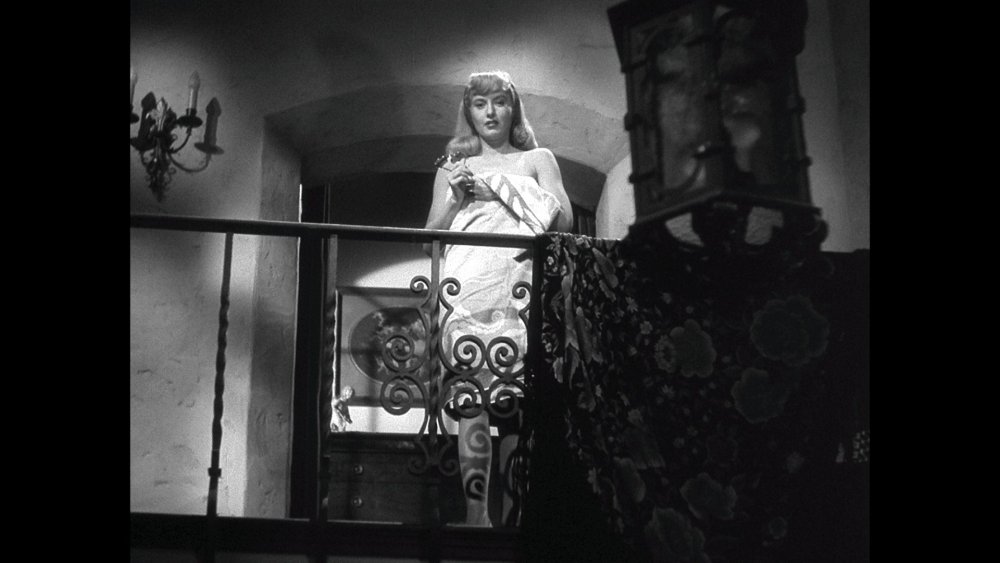 Mogambo’s women indicate something else about the blonde in Hollywood – she doesn’t trigger just one set of meanings, she carries a whole range of them. It could be argued that these merely constitute a range of simplistic stereotypes, as suggested by Molly Haskell in From Reverence to Rape. In other words, the blonde may feature in a range of roles, but that range consists only of types, such as the floozy or the virgin.

It does the actresses and stars a disservice, however, to relegate them all simply to a predictable set of conventions. Like that other cinematic staple, the gangster, the blonde may activate familiar iconography, clichéd relationships with other characters and recurrent narrative themes, but this doesn’t preclude individuality and complexity in performance and character. Just as the roles of the showgirl and the femme fatale offer opportunities for some of the most memorable characters in cinema history, so the concept of the blonde has located countless actresses at the pivotal point in a film’s story.

There is undeniably an element of spectacle about the blonde, the inevitable attention grabbing of the gleaming halo that adorns her head and its associations with glamour and femininity. The blonde can also be a fantasy: in L.A. Confidential (1997), Kim Basinger plays a call girl who is a Veronica Lake lookalike, making her living from enabling men’s fantasies of going to bed with a blonde screen icon. This multi-layered depiction of the desirability of blondeness demonstrates how the role of ‘the blonde’ can be a comment upon the complex and contradictory messages about what is desirable in a woman. Although cinematic blondes do not signify one thing alone, they do usually connote female attractiveness, and this is possibly why Daniel Craig as James Bond was, for some, such an outrageous prospect.

The selection of films in the Blonde Crazy season demonstrates, however, that there is much more to the blonde than spectacle. Alongside the extended run of Gentlemen Prefer Blondes (1953), which showcases Marilyn Monroe’s peerless skill as a comedienne and musical performer (mercilessly riffing on her own performance of blondeness), these films are a collection of intriguing and multi-faceted characters and actresses who happen to have blonde hair.