Arthur Penn saw his career fizzle out after 1970. But for the space of a decade he was one of America’s most challenging directors. Peter Biskind, who interviewed Penn on many occasions, pays tribute. 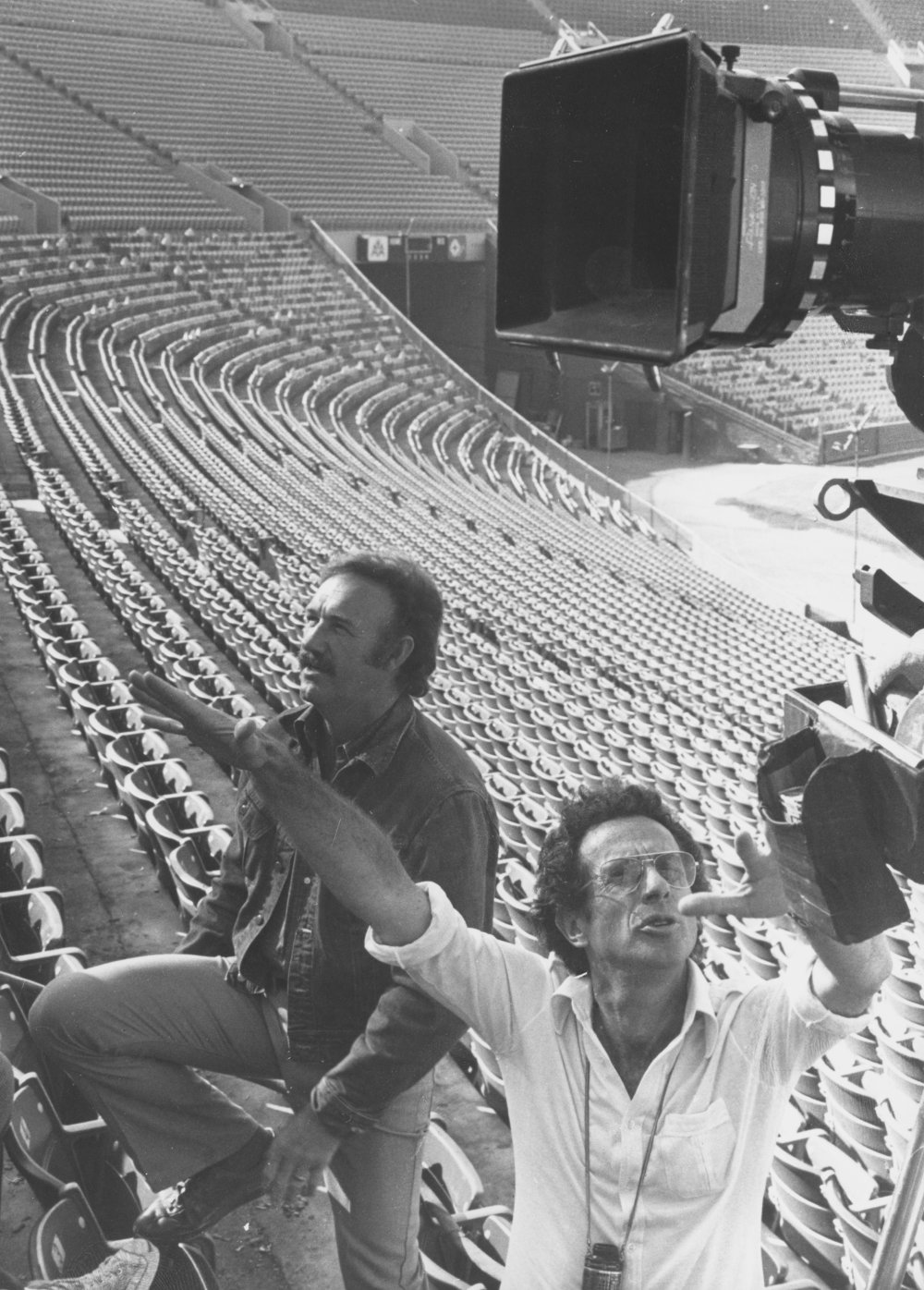 Arthur Penn, who died on 28 September, one day after his 88th birthday, was one of the most successful and original television, film and theatre directors of his era. We were casual acquaintances. I interviewed him many times over the years, and occasionally we ended up on panels together. I found him unfailingly cordial.

The only time he became testy was over the issue of credit for Bonnie and Clyde (1967). The scuttlebutt was that Warren Beatty selected Penn as director because he knew he could control him – a rumour which Penn, not surprisingly, took vigorous exception to, insisting that he, not Beatty, directed the film. He was always fulsome in his praise for Beatty, but not as a director; his praise was confined to Beatty the actor, Beatty the producer and Beatty the Hollywood player who seized the film, which was DOA, bullied Warner Bros, which produced it, and turned it into a hit.

Born in 1922, Penn was considerably older than the generation of movie brats who turned the 1970s in Hollywood into a renaissance of sorts. He came back from the army after World War II just in time to take advantage of the Golden Age of 1950s live television, directing shows for Playhouse 90 and other showcases of the period.

But golden age or no, television lived in the shadow of movies. Like all his colleagues, no matter how successful, Penn aspired to the big screen. Marty, originally written for television by Paddy Chayefsky, had made its way there, and won the Best Picture Oscar for 1955. Penn was signed by Warner Bros to direct The Left Handed Gun (1958), originally a teleplay written by Gore Vidal which had first appeared on Philco Playhouse. The young director was paid the munificent sum of $17,500.

Penn arrived in Tinseltown just as the Old Hollywood was disintegrating. It was a pivotal moment, and he took delight in recalling his vivid impressions of his first visit to the Warners lot in late 1956 / early 57. Jack Warner himself took Penn and his producer Fred Coe on a tour.

“We were absolutely bug-eyed, as you can imagine,” Penn remembered. “We were coming from the improvisatory and makeshift state of live TV. He took us in to one stage where they were shooting Old Man and the Sea, a film that Freddy Zinnemann was doing with Spencer Tracy. They had built an entire cyclorama the magnitude of which I had never in my life imagined. There was a horizon of the sea, and they were going to do all the stuff with the boat, and way up above us was a tiny scaffold with two guys painting.

“Then Jack announced, ‘And over here’s the goddamn television operation. Listen, you guys, you’re from television – you want to run the fucking thing?’ I took that as evidence of the fact that they were fumbling. They knew that there was this monster out there that was eating up the audience, but they didn’t know what to do about it. Naturally we said, ‘No, we’re here to make a movie.’” 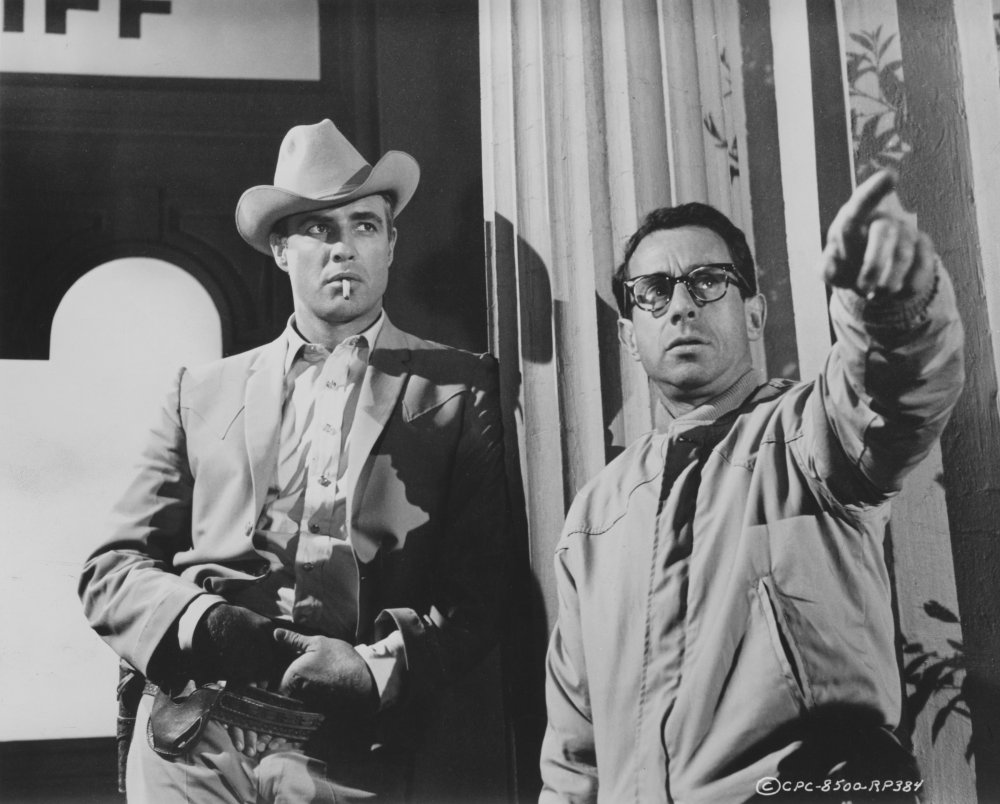 Directing Marlon Brando in The Chase (1965)

Penn might have been better served by saying yes, at least in the short term. Despite having Paul Newman as his star, he was treated like dirt. “The status difference [between] TV and feature directors was enormous,” he observed.

He was assigned a DP, Pev Marley. “Pev always showed up beautifully dressed, because he wouldn’t lift a gel, you know? He had grips to do that. He was practising his golf swing. A bunch of guys came by and said, ‘Hey Pev, how’s it going?’ He replied, ‘You know, I got one of them television guys,’ full of contempt. He resented us. He was a gentleman of the American Film Industry.”

Marley was right to resent Penn. Television, the French nouvelle vague and the youth revolution were about to turn everything upside down. “In America, television was the equivalent of the nouvelle vague,” Penn continued. “We were changing the nature of how you told a story with images. I did stuff in TV that was weird, like I used a midget in one place for somebody who was in a different perspective.

“There’s a sequence in The Left Handed Gun where Paul Newman writes on the window what’s going to happen and then we go forward to it happening. It’s a change in narrative structure that André Bazin responded to very positively.” (It’s hard to imagine a Hollywood director today being so proud of what a theoretician thinks of his work, much less a ‘foreign’ one.)

When the shoot was over, recalled Penn, “a man came up to me and said, ‘Hi, I’m Folmar Blangsted, your editor. I’ve been assigned to your picture.’ It was peculiar to be forced to turn a film over to him, never having explained anything that I was attempting.” The next time Penn saw the picture was when he paid admission to a cinema in New York where it was playing on the bottom half of a double bill.

Still, the joke was on Jack Warner, as Penn would eventually prove. “Hollywood had lost its grip,” as Penn later summed it up. “They were unable to generate the material that people wanted to see.“ But Penn was happily sidetracked into the theatre, where he had an extraordinary run of hits: Two for the Seesaw (1958), The Miracle Worker (1959), Toys in the Attic (1960), An Evening with Mike Nichols and Elaine May (1960) and Wait until Dark (1966).

Penn returned to the screen with his 1962 adaptation of The Miracle Worker (a hit), but then endured a series of humiliations when Mickey One (1965), starring Beatty, turned out to be an embarrassingly pretentious flop. The Train (1964) was taken away from him by Burt Lancaster after he’d barely begun shooting, and The Chase (1966) by producer Sam Spiegel in the editing.

But Penn couldn’t stay away from the screen. Caught up in the mid-60s infatuation with politics and movies, he turned his back on theatre, which increasingly struck him as elitist and irrelevant, and allowed Beatty to drag him kicking and screaming into Bonnie and Clyde, the film that made his reputation. 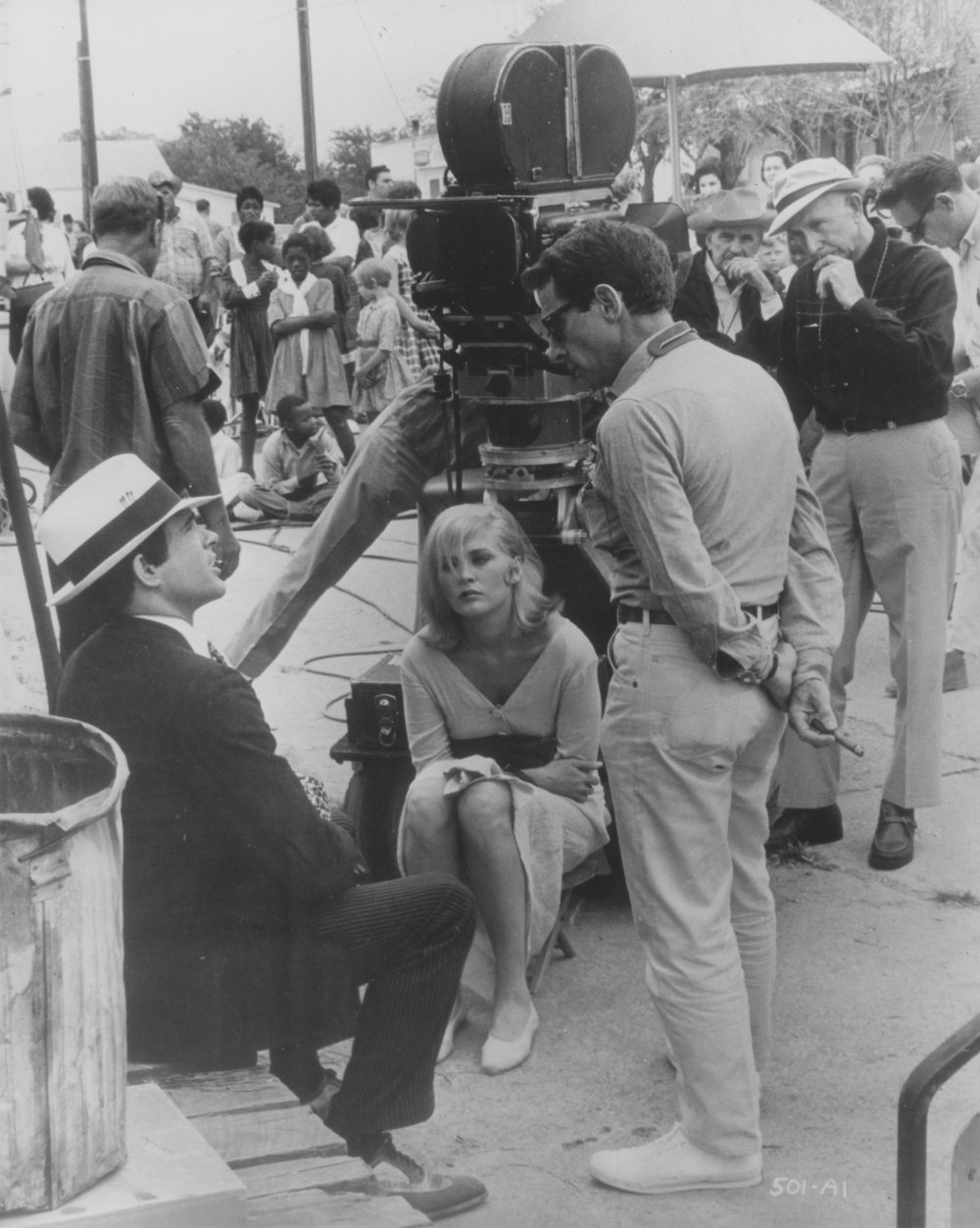 Directing Warren Beatty and Faye Dunaway in Bonnie and Clyde (1967)

The violent, shocking and justly celebrated fusillade of gunfire that ends the saga of the outlaw couple – sending them into a spastic slo-mo dance of death punctuated only by the eruption of squibs into hundreds of blood-red blossoms – was all Penn. It was a visual tour de force executed with four cameras running at different speeds, and comprised of shards of recent history (a piece of Clyde’s scalp was supposed to evoke the Zapruder film and the JFK assassination), borrowings from other movies (he cited Kurosawa’s The Seven Samurai and Belmondo’s death in A bout de souffle), and driven by Marshall McLuhan’s conviction, shared by Penn, that the medium is the message.

Bonnie and Clyde created a scandal with its violence, but neither Penn nor Beatty backed down. “It was an in-your-face film,” Penn explained, “in the sense of saying, ‘Look, if we’re in the Vietnam War, it is not going to be immaculate and sanitised and bang-bang – it’s going to be fucking bloody.’

“We felt,‘Let’s not go on with what the studios have adopted for so long’ – way back to the days when you couldn’t shoot somebody and see them hit in the same frame – there had to be a cut. That was all about Hollywood’s accommodation to the pressure groups.”

Vietnam was the ghost that haunted Bonnie and Clyde. Penn’s film heroised bank robbers and killers as anti-establishment outlaws, while demonising the authorities. It kicked off the New Hollywood of the 70s, although to give credit where credit is due, the echoes of Godard et al were there in the script, written by Robert Benton and David Newman.

It was the beginning of Penn’s most creative period. “I’d always wanted to make Little Big Man [1970],” he continued. “I had had the script for six years. One of the great blessings of Bonnie and Clyde is it made it possible to do it.

“And in the interim, I made Alice’s Restaurant [1969]. Here we were living in Stockbridge [Massachusetts], and this event occurred just down the road from us. Somebody had to make something about the 60s, for Christ’s sake. It just struck me that so few films were being made about it. And the few that were made, most of them were just wretched.”

Then came Night Moves (1975), with Gene Hackman, and the anti-western The Missouri Breaks (1976), a star vehicle (Marlon Brando and Jack Nicholson) which fell victim to the madness that burned through the late 70s, putting an end to the hopes for a new American cinema.

But even without the nuttiness Brando brought to his role (he wore a dress in several scenes), the movie was doomed. Penn was too cerebral and subversive for the marketplace. He was continuing down the road of genre deconstruction embarked on in the early 70s by directors as diverse as Dennis Hopper and Robert Altman, but the upheavals that defined the 60s had ended, and audiences had retreated into business as usual. They no longer wanted their genres turned upside down; they just wanted to have fun, and younger directors like Spielberg and George Lucas were only too willing to oblige. 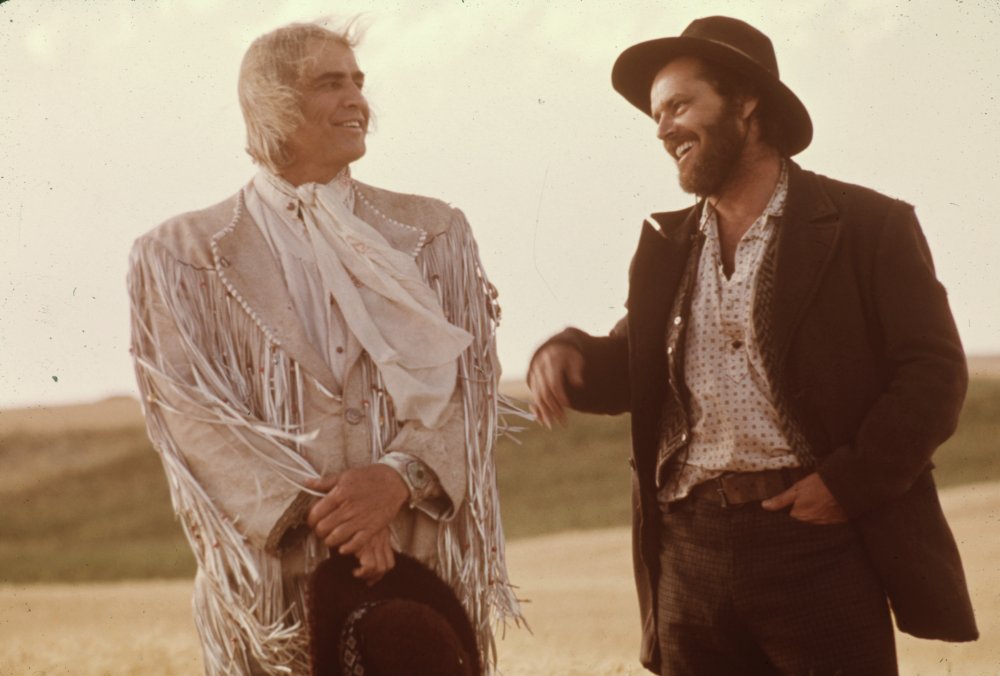 Marlon Brando and Jack Nicholson in The Missouri Breaks (1976)

Sandwiched as it was between Jaws (1975) and Star Wars (1977), The Missouri Breaks never had a chance. “Fashions change and then the content of film changes,” Penn observed ruefully. “Movies went Star Wars, went into the mega-hits, which were not the sort of personal films we had been making. They were not about people – they were about creatures.

“I remember seeing Close Encounters [1977] and thinking, ‘Hey that’s a nice film, and what a sweet idea to think that these aliens from outer space are not hostile.’ But I couldn’t get interested in it beyond the technical aspects of it. I certainly couldn’t get into the idea that kids were going back again and again and again to see it. It simply was a cartoon world that I would never be party to. So I didn’t understand it.

“The impulse which always exists in Hollywood surfaced again, which is: ‘We own this, we manufacture it, we merchandise it, we do what we do best in the world.’ The studios reaffirmed their grip, and it’s a grip that has shut off the lifeblood of film. It’s flourishing as an industry, but it’s not flourishing as a forum for any kind of art.”

Penn woke up one morning and discovered that the ball was over – and there was no glass slipper. As he put it, “You go along thinking that’s where the hemline should be, and all of a sudden, somebody is wearing mini-skirts. You think you read the fashion of the culture in a certain way, and lo and behold it’s switched out from under you, and you’re old-fashioned. One of the casualties of success is that you get arrested in time – you lose concern with the edge, where things are changing. That’s the trap for everybody in a popular medium. Lillian Hellman said it’s the one accusation against which there’s no protection – and it’s true.”

Penn subsequently went on to direct several more movies, but he never regained his footing. Comparing himself to his contemporary Robert Altman, he said, “We both got hurt. We both got discarded.” Even so, Penn’s remarkable output in both theatre and film over the decade-plus that ran from Two for the Seesaw in 1958 to Little Big Man in 1970 left an indelible mark on American culture.