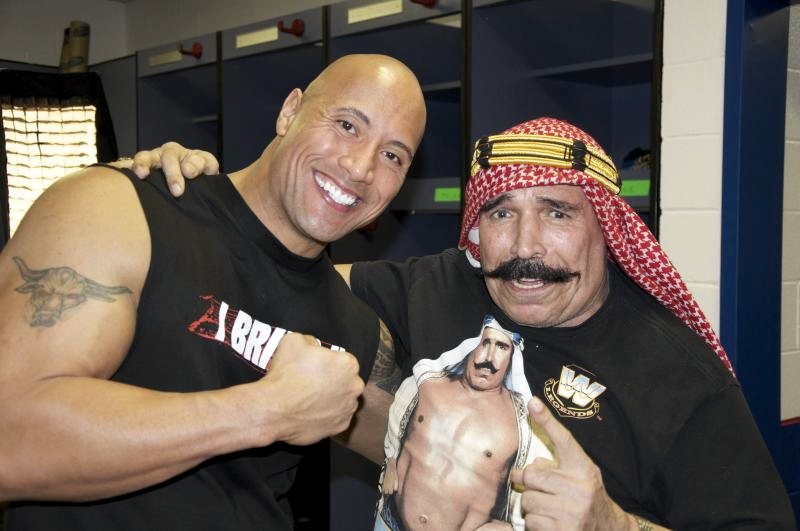 Dwayne ‘The Rock’ Johnson with Khosrow Vaziri aka the Iron Sheik, star of Igal Hecht’s crowd-funded The Sheik (2014)

“I think George would like to have his photograph taken with the Sheik – is there time?”

Entourages are not something you’d expect to see at a documentary film festival, but there they were, two houses both alike in dignity, creeping towards each other in a hotel hallway in Toronto where air space – and available interview rooms – are at a Saturday-morning media-day premium. In one corner: George Takei, the erstwhile Mr. Sulu and septuagenarian social-media superstar, at the 2014 Hot Docs Canadian International Documentary Festival with the profile film To Be Takei [homepage]. In the other, the wheelchair-bound ex-pro wrestler Khosrow Vaziri, aka the Iron Sheik, also a doc subject at the festival (the crowd-funded The Sheik [homepage]), also in his seventies, and also beloved of the Twitter hordes, as infamous for being iconoclastically combative as Takei is for sly one-liners. Handlers on both sides produce their cell phones to immortalise the summit and the two camps head off on their separate ways.

Pulp: A Film About Life, Death and Supermarkets is released in the UK on 6 June, opens Sheffield Doc/Fest on 7 June and is reviewed in the June 2014 issue of Sight & Sound.

Celebrities are welcome at Hot Docs, and To Be Takei and The Sheik are merely two of the titles offering an intimate window onto fame: there’s also Harmontown, about the thorny sitcom visionary Dan Harmon, and Super Duper Alice Cooper and I am Big Bird: The Carol Spinney Story, whose titles are fairly self-explanatory. (Ditto Pulp: A Film About Life, Death and Supermarkets, an affectionate portrait of Sheffield’s finest group, whose 2012 homecoming yields enough ace concert footage to spackle together a fine piece of fan service.)

Being North America’s largest documentary festival means welcoming all kinds, and if Hot Docs hasn’t exactly seemed reluctant over the years to invite films with stars attached, it’s hard to hold it against them; in a city like Toronto, with its September red-carpet pedigree, it’s important to try to keep up. And while Hot Docs does have a number of juried competitions (for Canadian, international and short nonfiction films), it is ultimately – like TIFF – a festival for the ticket-buying public, who have historically shown up in droves to see documentaries: a sign of healthy interest that led in 2011 to the festival overhauling the venerable Bloor Cinema in the heart of the city’s student neighbourhood into a year-round, nonfiction-oriented theatre called the Bloor Hot Docs Cinema.

As is the case at TIFF, the films with media days at Hot Docs are not necessarily the worthiest items on offer. The Sheik, directed by Igal Hecht, sketches the life of an unlikely icon – an Iranian immigrant who lived out the American Dream even as his bruising, rule-breaking alter ego became a mainstream-entertainment-culture pariah – but it’s made so conventionally that the big screen hardly seems necessary. (Its Toronto-based producers have wisely arranged a Vimeo on Demand platform, which will get the movie to wrestling fans in the comfort of their own homes.) 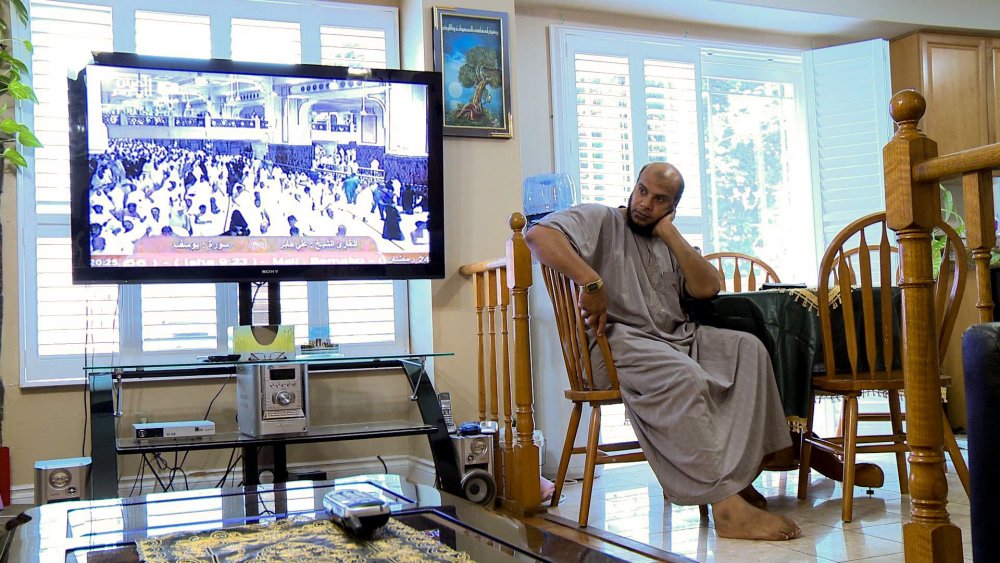 A somewhat more urgent Toronto-affiliated production that touches on issues of Islamophobia is Amar Wala’s The Secret Trial 5 [homepage], which examines the Canadian government’s use of ‘security certificates’ to imprison alleged terror suspects without providing evidence or even an explanation. (The men were detained after September 11 and have still not been freed.) Wala’s film methodically reconstructs its titular quintet’s ordeal and, crucially, turns its crucial defect into a strength: it’s made clear that the lack of interviews with government officials is not a case of one-sided filmmaking but an evasion on the part of the powers-that-be.

Although it’s been modestly produced, The Secret Trial 5 has power as a political provocation, drawing a little bit of blood and some nicely unambiguous conclusions about a process shrouded in secrecy. By contrast, Maxim Pozdorovkin and Tony Gerber’s The Notorious Mr. Bout, about the infamous Russian arms smuggler Viktor Bout, doesn’t come down on either side of the argument about his subject, whose media-branded ‘lord of war’ persona is derided by a few of its interview subjects as just so much convenient American scapegoating. 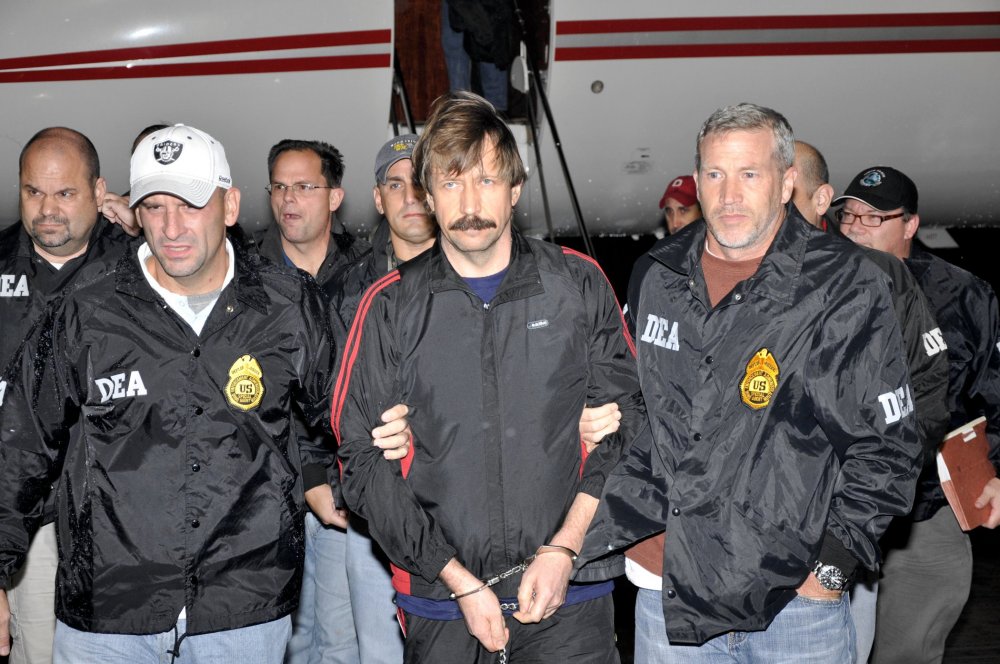 At the film’s Q&A, Gerber politely – but somewhat defensively – challenged audience members around the idea that the film was too ‘soft’ on Bout, whose often innocuous home movies take up a fair amount of its running time; while The Notorious Mr. Bout certainly makes the case that its subject is by no means the only offender in a clandestine trade that branches out across the globe, it doesn’t underplay the severity and consequences of his crimes either. Fleetly paced and possessed of a few cleverly poetic touches – like a sky-high final sequence that leaves both the film and the notorious Mr. Bout stranded in mid-air – Gerber and Pozdorovkin’s movie is entertaining but with an unsettling undercurrent.

The obfuscating effect of media frenzy is also a key theme of Kitty Green’s Ukraine is Not a Brothel [homepage], which goes deep inside the self-describedly radical feminist clique Femen. Like Michal Marczak’s excellent and under-seen 2013 film Fuck for Forest, about a collective of eco-activists whose politics are bound up in provocation, Green’s films teases out the links between praxis and narcissism; her painstakingly acquired footage of Femen’s members throwing their (slender, naked) bodies into the fray, ostensibly on behalf of gender solidarity, acquires an especially troubling extra dimension after late revelations about the group’s true governing power. (Bonus points are awarded for the witty use of Boney M’s indefatigable Rasputin, which, in retrospect, is an ominously suggestive musical cue). 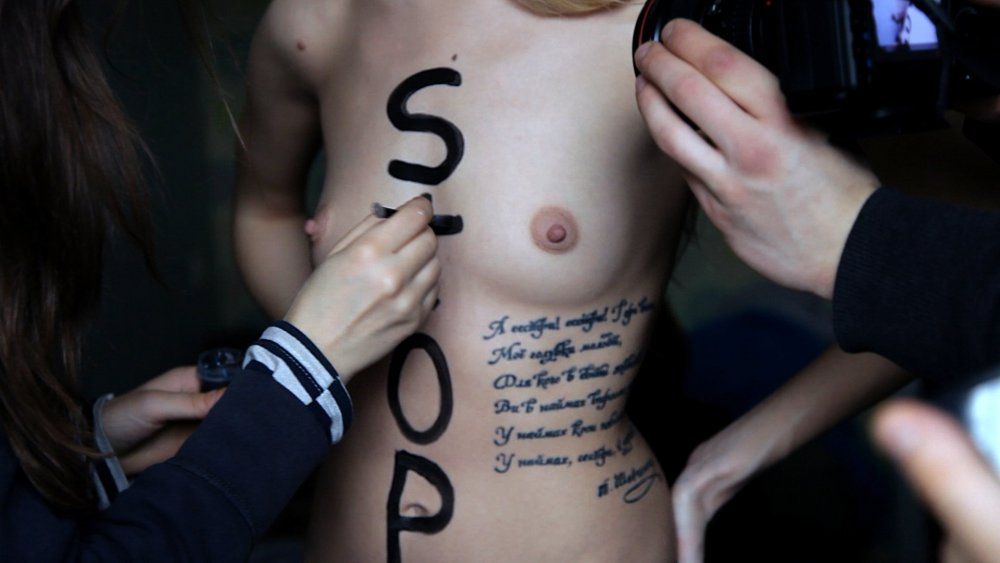 Jessica Oreck’s The Vanquishing of the Witch Baba [homepage; also covered in Nick Pinkerton’s report from this year’s True/False Film Festival] is an essay film that grafts a Slavic fairy-tale onto a deceptively digressive tour of post-Soviet society, including sequences in emptied-out Ukrainian locations that feel either pre-civilisation or post-apocalyptic. As in her previous Beetle Queen Conquers Tokyo (2009), Oreck shows a talent for teasing out connections between the natural world and national cultures without fixing her meanings too rigidly; the result is a film that’s spacious but not aimless, adorned by superb cinematography by the ubiquitous Sean Price Williams.

Jesse Moss’s The Overnighters [homepage; also covered in Pinkerton’s True/False festival report] is a film that’s played to near-universal acclaim so far, and while that is not in and of itself reason to be suspicious, its admittedly powerful tale of a North Dakotan pastor who risks the wrath of his community by opening his church’s doors to itinerant workers has its problematic aspects, including some highly selective storytelling tactics that push key characters and conflicts to the edge of the frame. (One sequence so brutally undercuts a minor character’s concern that it feels like a mistake made in the editing room.)

Moss’ smart, pushy direction transforms The Overnighters from a survey of a shattered local economy into a character study of a man with shaky foundations of his own, but the personal drama occludes a fuller portrait. That its subject, Jay Reinke, reportedly received a standing ovation at the film’s first Toronto screening is at once understandable and revealing both of The Overnighters’ narrow focus and of the importance – for filmmakers, programmers and audiences alike – of having a star on hand.

Related to Reality and the red carpet: Hot Docs 2014