Margaret Salmon in the round

Tramway Glasgow’s retrospective of 20 years of the trans-Atlantic artist’s movies brings together her major works, minor and marginalia, indoor and outdoor, human and bestial, and not least a live performance of 2017’s Mm, into a marvellous whole. 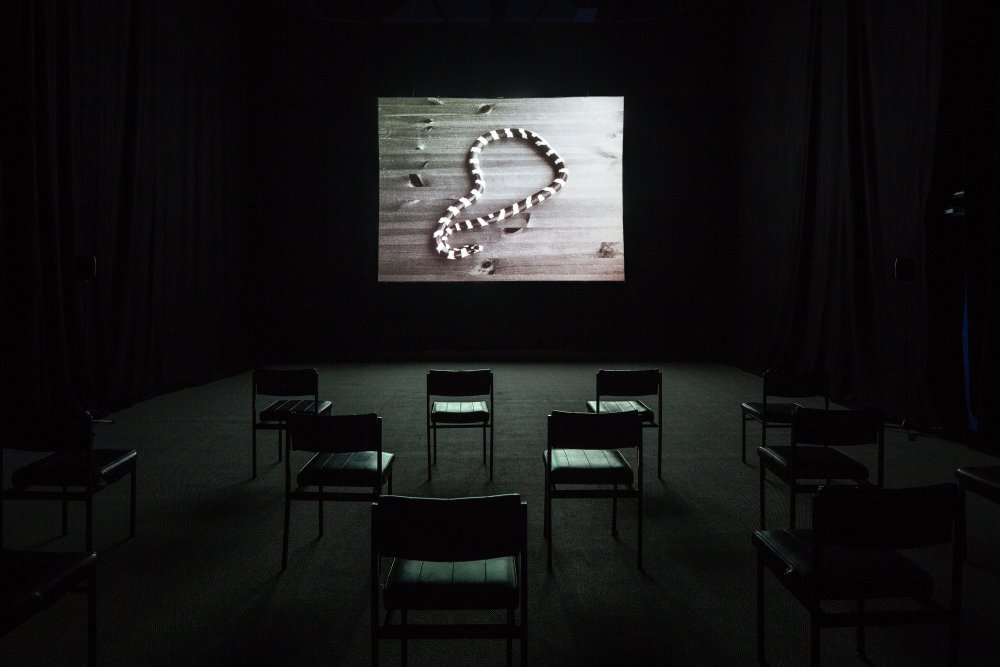 How can you effectively survey more than 20 years of filmmaking? How to tie together films that vary in form and approach, films made by a person at different periods of their life, across different countries, with different friends and family members? How to curate a retrospective that doesn’t suggest finality, but leaves room for continuation? One that accepts that, besides the work that gets displayed, there is incomplete work, work that will forever remain unstarted, and work that is still to come?

These questions are wrestled with – overtly and inadvertently – in Circle, a show containing new and older work by American-born, Scotland-based artist Margaret Salmon currently on display at Glasgow’s Tramway gallery. The exhibition – consisting of a rotating retrospective programmes alongside a new multi-monitor installation piece and a sound work – arrives alongside a screening (with accompanying musical performance from Sacred Paws) of one of her newest films, Mm (2017), as part of Glasgow Film Festival’s underrated experimental strand Crossing the Line. 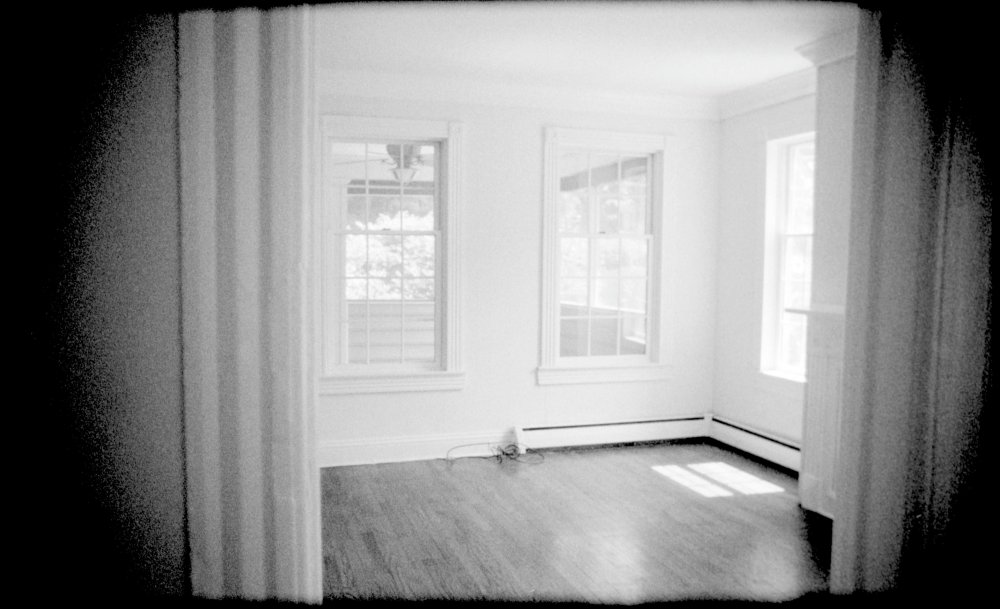 Split into four cycles on weekly rotation, titled ‘here’, ‘there’, ‘everywhere…’ and ‘outside over there’, the films in the programmes are divided along roughly geographic lines, moving in turn from America to southern England, then Scotland. Instead of being overwhelmed with volume, you’re offered a portion to contemplate in the time between return visits – or, for the one-time attendee, an experience that is necessarily incomplete.

Furthering this, the cleverly titled Part-Time (2018), a six-channel sound piece made of fragmented aural materials (uncut interviews, echoing field recordings, indiscernible whispers) cut from past projects, plays intermittently out of speakers pocketed around the room, while additional visual interludes – snakes and sunsets, camera tests and offcuts, what Salmon calls “the sketches, the research, the remnants” – are interspersed between exhibited works. Additionally, Company (2018) – a nine-channel, stacked CRT monitor installation which pieces together parts of various video works, placing disparate elements from a wide-ranging career into desultory dialogue – is also suited to repeat immersion. 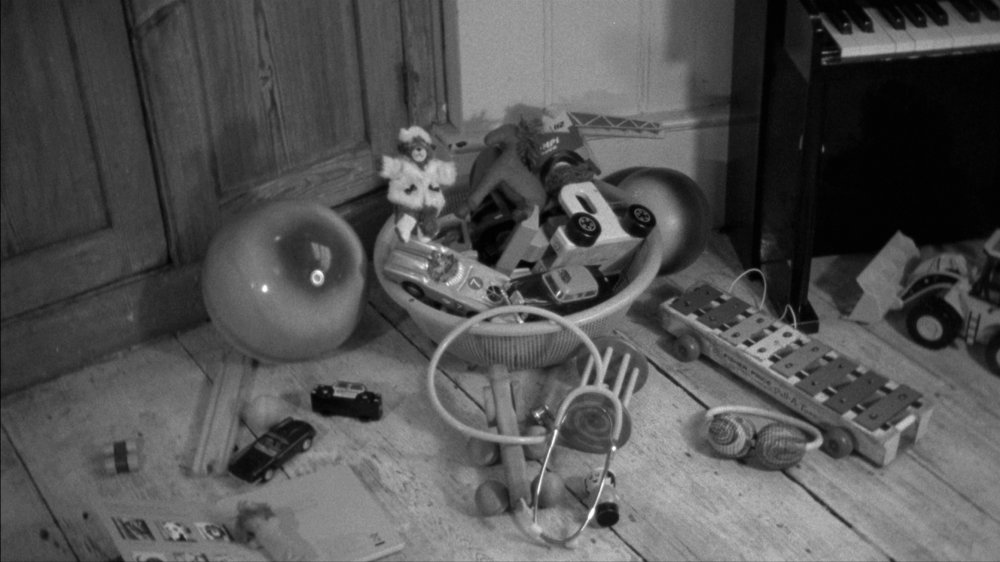 Some films contemplate the home and its inhabitants, often with a gendered perspective. Housework (2014), for instance – a black and white hybrid animation – shows a series of household chores completing themselves. A bed makes itself, toys return to their box, the dishes do themselves. Traditional depictions see housework as women’s work, but here the interior order is autonomous. Housework becomes the work of the home alone.

Also depicting a home bereft of humans, the austere House (2018) contains only static shots of a vacant home, a study of light landing in empty interior spaces. It could be a documentation of arrival, the excitement of transitioning to a new home – or the bittersweet sensation of departing from an old, much loved one, capturing those last ghostly memories on celluloid. 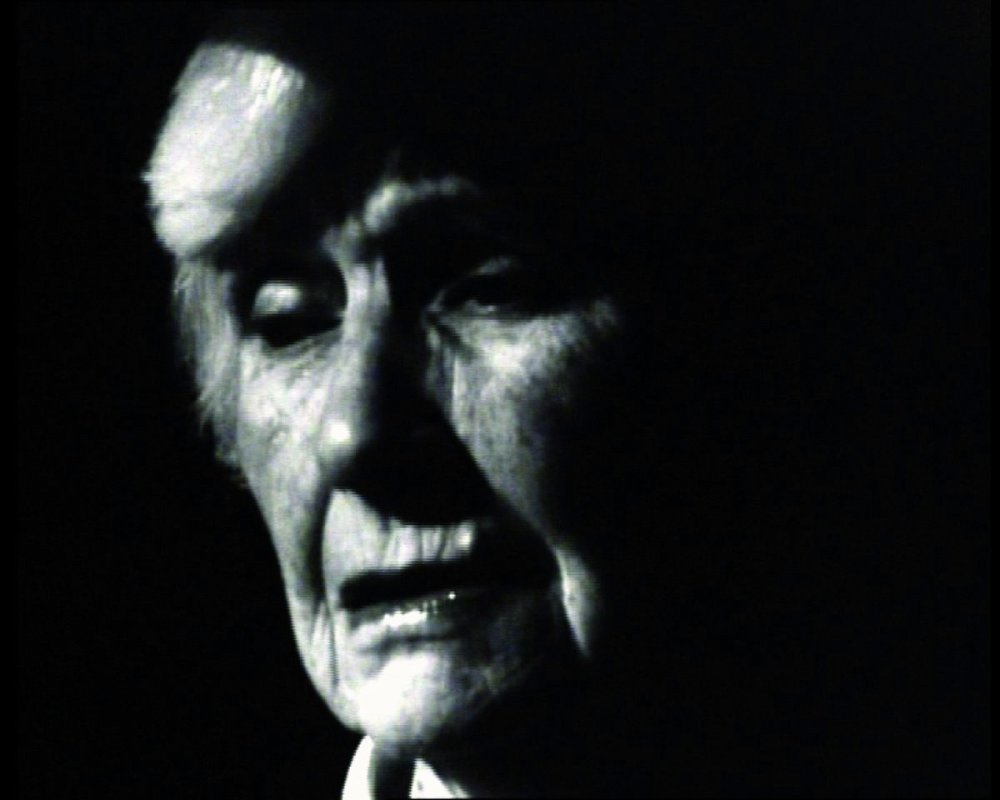 Peggy (2003) is similarly haunted, with the titular character singing Amazing Grace in a raspy, deflated tone while Salmon films her undertaking routine domestic tasks – hoovering or ironing with slow concentration – and often cuts to closeups of her fragile face. With each repetition of the refrain her voice sounds more beleaguered, if not quite defeated. Salmon’s camera captures her, frail and feminine, up uncomfortably close and personally, but not compromisingly. A glimmer of former vitality persists. Much like House, the film is somehow both plaintive and jubilant, an elegy for the elderly and lonely, a hymn to resilience. 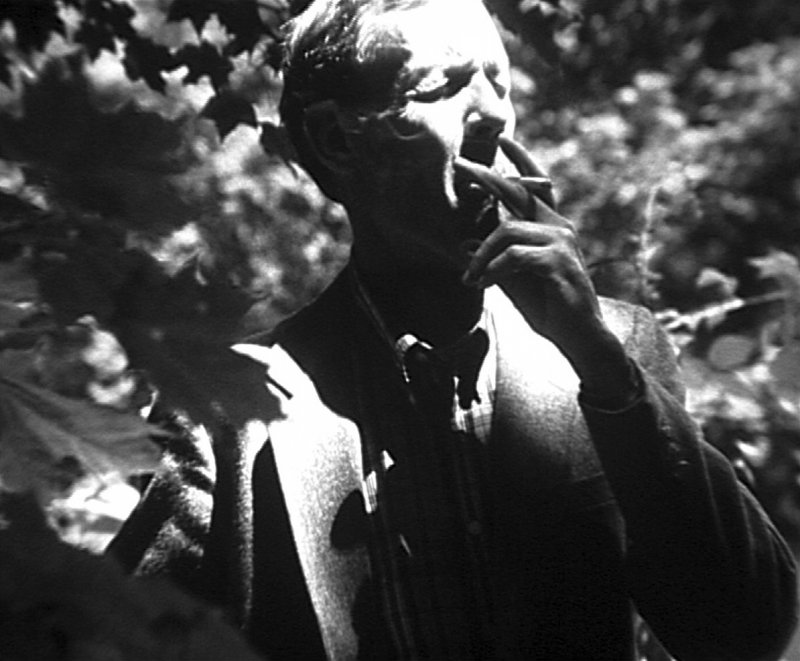 Domestic conflict appears in early collage work P.S. (1998), where a couple are heard arguing bitterly and repetitively while a series of sequences – repurposed from old Hollywood films, and even older documentaries – show a man at work, chopping wood, smoking, leering at the camera or tending to his yard. The combined effect of the masculine posturing in the image and the aggression in the audio proves ever more forceful and suffocating.

An extract from Oyster

Other works engage with the natural environment. Oyster (2014) serves as a good bridging point from the domestic-portrait style of the early segments to the mode that dominates the latter two programmes: films demonstrating Salmon’s preoccupation with nature and the outdoors. She films an aged oyster fisherman in his home, having him retail the stories of his specific, specialised trade whilst splicing in footage of a fisherwoman at sea. Queasy closeups of all manner of captured sea creatures sit alongside murky underwater material and beatific sunsets and seascapes, overlain with gentle music. It is an unassuming film, yet one of refinement and poise. 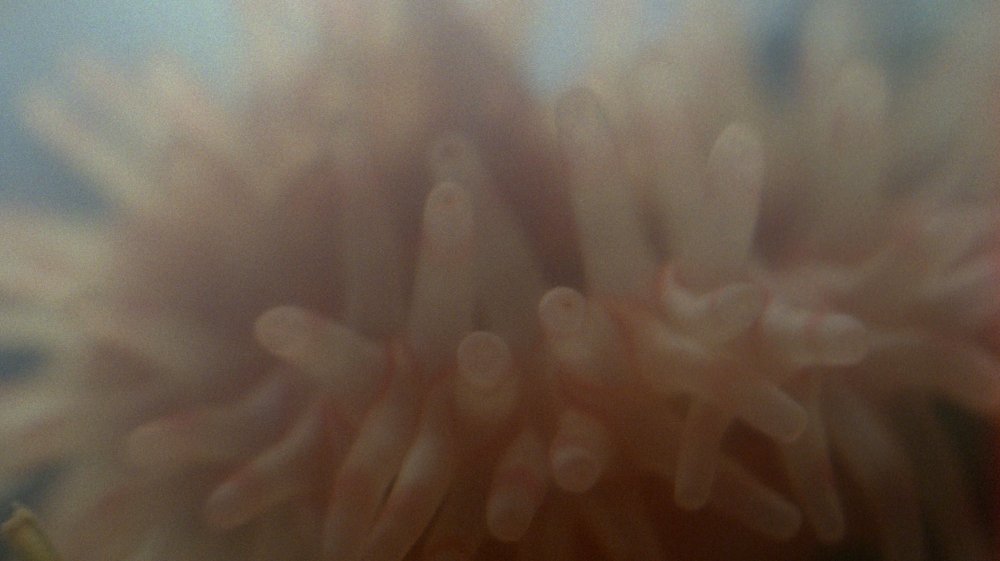 In Bird (2016) a flurry of feathered friends is catalogued, a child naming them in sequence as they sit on a small hand. Each bird is filmed so closely and sharply that its breathing is visible, their little heartbeats palpitating inside the plumage. Soft, sweet and simple, it is a perfect example of the pleasures of paying attention to nature, but also the joy of sharing knowledge, introducing things to others and watching them respond. Salmon’s camera shows a curious eye looking to convey the wonder with which she has learnt to look at the world. 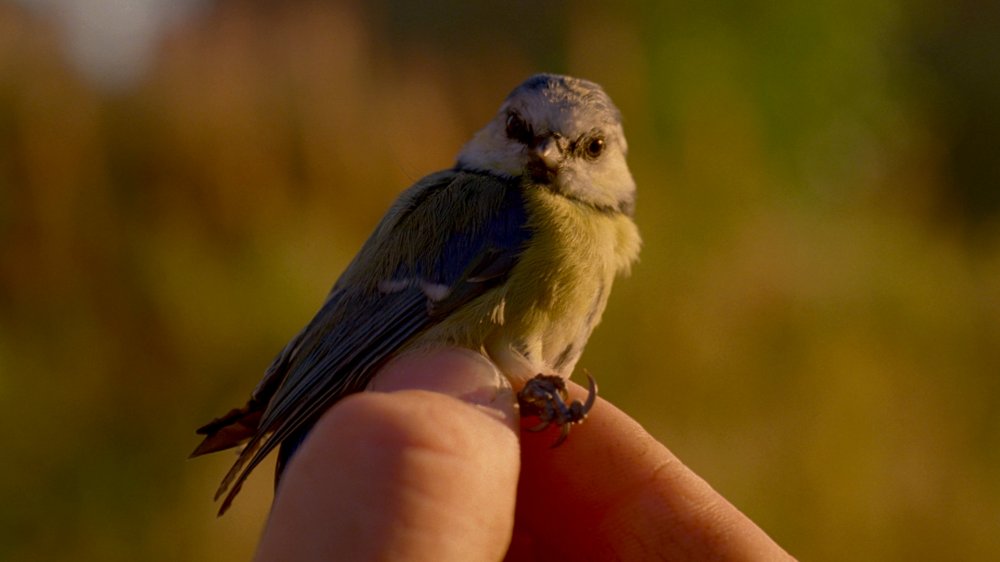 Eglantine (2016) – Salmon’s first and only feature – extends this explorative pleasure, blurring constructed scenarios and observed occurrences alongside documentary images of “both human and mammalian subjects” to make an unorthodox portrait of a camping trip taken by Salmon and her children in the Scottish wilds. “Do you see the badger, honey?” she whispers to her kin in the first scene, opening up a world to them, maybe for the first time.

Beginning semi-ethnographic and semi-autobiographical with hints of many of the films that preceded it, Eglantine quickly departs into something more ethereal, dipping between real and imagined scenarios with lucid abandon as it slides into the perspective of the young girl leaving the group to explore both the environment and her subconscious. A film of pure wonderment, soft, sensuous and calming, it is a restorative and regenerative experience of a type that is disquietingly rare. 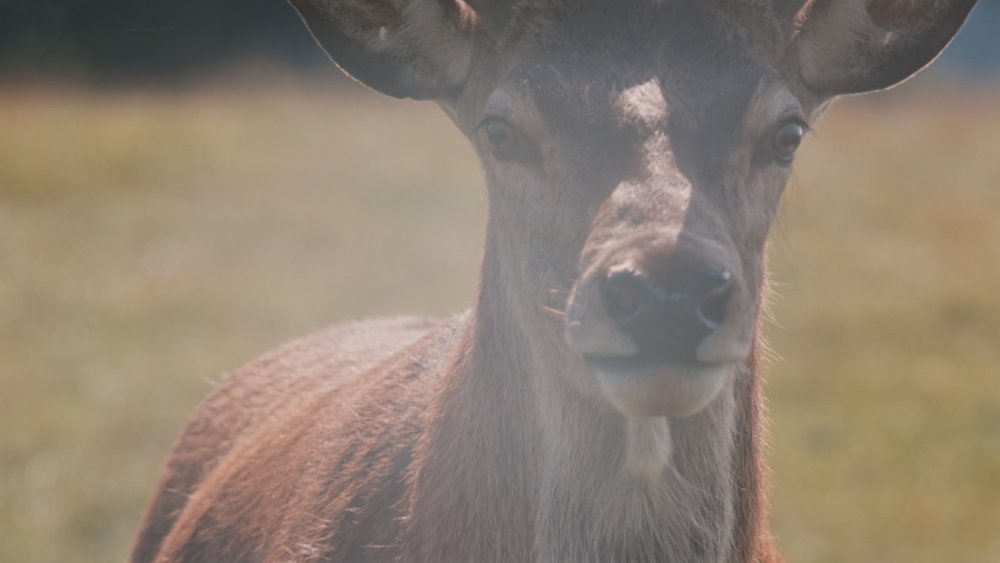 In some ways, Mm (2017) stands apart. Commissioned by Berwick Film & Media Arts last year, shot in a single day in August, and assembled ready for presentation at the festival in September, it is a small and specific marvel, unique both generically and geographically within Salmon’s filmography. Emerging from Salmon’s desire to make a ‘sports film’, it marks the 50th anniversary of Berwick-upon-Tweed’s speedway team the Berwick Bandits – yet is not immediately recognisable as either sports film or celebration. Instead it is at once observational documentary, “feminist linguistic investigation” and music video, cinéma vérité gone astray.

Filming in striking, ripely coloured 35mm, Salmon tracks the raceday developments – observing the preparations and machinations, capturing the sense of pre-race fervour in long leisurely takes, lingering on faces in crowds, and directing her gaze over everyone present, whether motorcyclist, coach, cheerleader or fan. Salmon records patiently, following the men in garages, onto the speedway and into the showers. Scenes play out as they would have whether or not the camera was there. 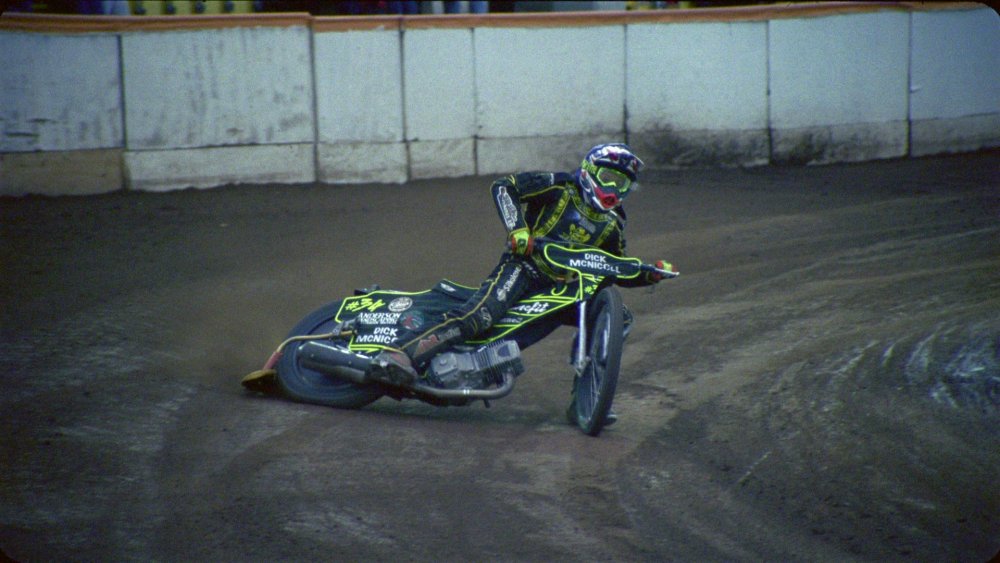 Alongside is a constant ambient hum of inaudible chatter, engine sounds and the clattering of raceway equipment, metal against metal, boots onto mud. And over the top of it all – performed live by Sacred Paws’ singer/guitarist Rachel Aggs – a chain of words beginning with M are read in sequence. Less spoken than spluttered, words are teased out tentatively and searchingly, as if the speaker isn’t aware what word is going to come next or sure yet of its significance. “Men mean more, maybe?” “Minus men means matriarchy?” Words become sentences; statements, ideas or even propositions. “Masculinity” is a leitmotif.

Soon, a series of hesitant questions and a fervent assertion, the alliteration ruptured. “Manmade? Man-way? Midway?” Aggs howls. “SPEEDWAY MOTHERFUCKER!” A yellow film flash and an engine roar, a cut to black and a cymbal clash. Image and sound gone mute in anticipation of the event. A gentle jangling of instruments over several dramatic close-ups of riders, then a montage in wide-shot as the race commences, guitar clattering excitedly, drums barreling a raceway fanfare as the bikes skid around the track, knees digging in and kicking up the dust.

As film, and especially as performance, it is light and wonderful, a bike-race music video capturing the spirit of the event in a way little else could. An all-male sport laced in brash ceremony and masculine bravura, the speedway – a world unknown to most – is of utmost importance to those who are involved in it. Salmon pokes and peers at it, before cracking it open, enjoying it for what it is. “Motorcycle, man, machine.” “Manhood… mania.” 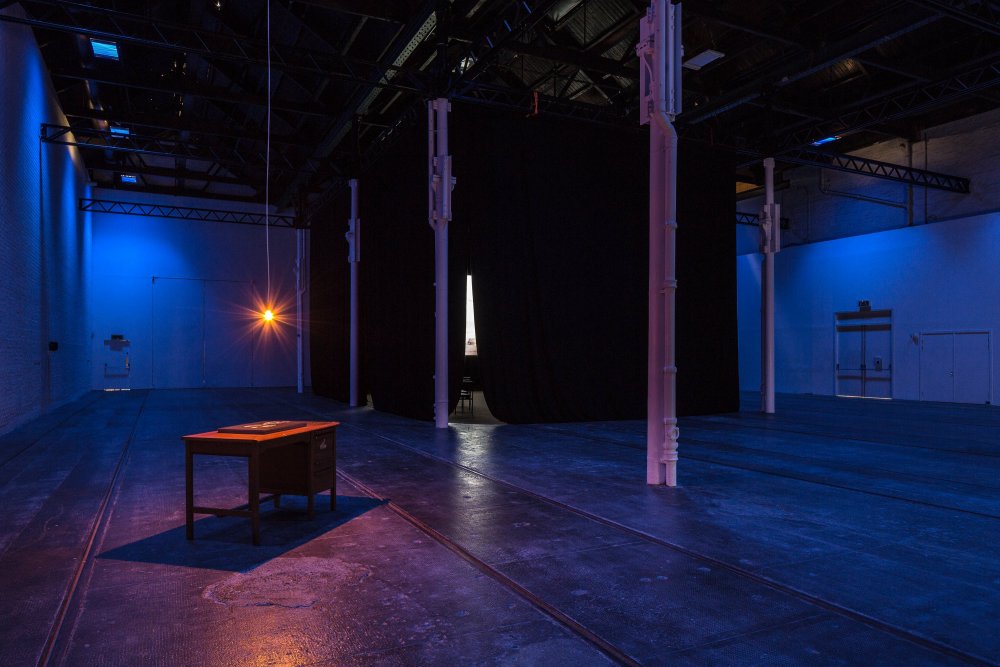 In the atmospheric confines of the Tramway’s cold, dark, sparsely arranged warehouse setting, Salmon’s films glow like small candles. Even if, with its live accompaniment, Mm burned that bit brighter, every film had its light. The decision to place completed films alongside the components of their making, or to consider the edge-lying elements of a career with as much interest as those at the usual centre of attention, may sound like small gestures towards foregrounding the marginal, but in actuality felt quite radical. By spending the time there, and by coming back, the committed, curious visitor can build a sense of the artist and her life through accumulation, patching piecemeal parts to make a composite whole. Work made from life, not about it.

Related to Margaret Salmon in the round