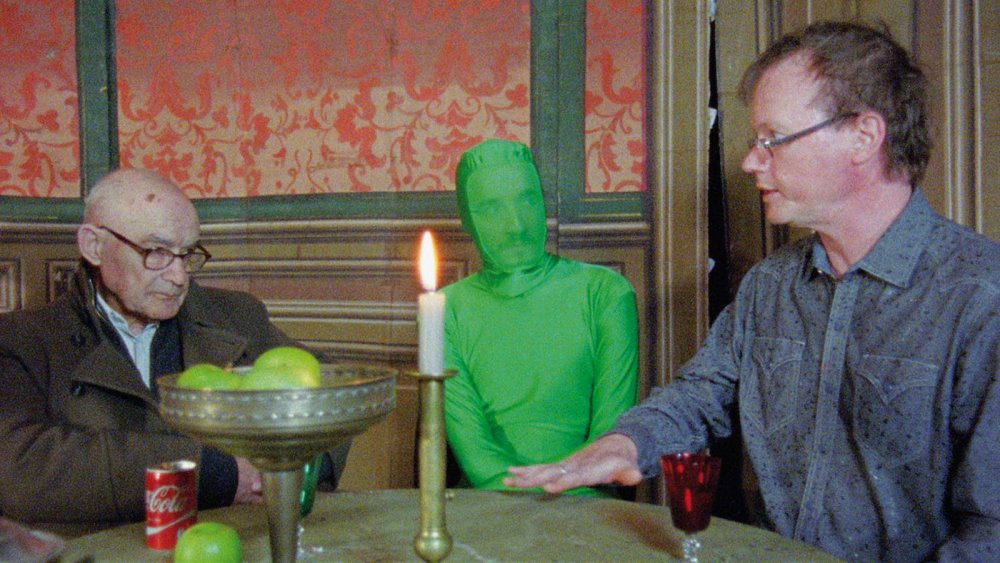 Frequent collaborators Ben Rivers and Ben Russell – the Bens, as they’re affectionately referred to by their fans – are usually associated with the outdoors, given their shared fondness for far-flung locales and life on the fringes. And although their peripatetic cinema deals in weighty subjects such as ethnography and post-colonialism, the films’ intellectualism is subsidiary to their aesthetic and visceral experience. As such, the 48-minute The Rare Event at first appears like a bit of an anomaly, finding the Bens locked inside a Parisian recording studio, filming dense theoretical discussions between highbrow luminaries like Jean-Luc Nancy, Étienne Balibar and Hans Ulrich Obrist.

The Rare Event was born out of an invitation, also extended to other artists (including Albert Serra, who can be spotted in the background of a number of shots), to film a three-day symposium whose theme, ‘Resistance’, was inspired by the title of a planned but never staged exhibition by the late philosopher Jean-François Lyotard.

In a gently flippant move, the Bens dressed an actor in a bright green full body suit and had him either sit amongst the speakers or walk around the room, providing a comic counterpoint to the group’s serious-minded deliberations. These the filmmakers captured in characteristic 16mm, for the most part in lengthy, roving handheld shots that slowly revolve around the circle of speakers and dedicate more attention to textures and gestures – the battered faux leather of the chairs’ backs, a shirt’s intricate floral pattern, a speaker scratching his nose – than to the seminar itself.

The images’ focus on the minute is reflected aurally, with the soundtrack affording as much prominence to the creaks emitted by the studio’s wooden floor as it does to the words spoken by the intellectuals gathered upon it. Since The Rare Event collates snippets from across the symposium’s three days, it’s not possible to learn much from the wide-ranging discussions.

Rather, the film’s own theoretical foundation is laid out in two staged scenes, the first a smaller round table led by Nancy and the second an interview between the green man and the theorist and filmmaker Manthia Diawara. Nancy links magic to art, arguing that their disregard for causality enables them to instigate a re-evaluation of reality in the beholder; Diawara indirectly elaborates on this notion by explaining theorist and poet Édouard Glissant’s concept of opacity (also explored in Diawara’s film One World in Relation), which he posits as vital to expression, for transparency is antithetical to poetry.

The inclusion of these reflections feels a tad self-contradictory, as their purpose seems to be that of providing context for the film’s most perplexing and fascinating conceit – to clarify its causality, in other words. At various moments, discordant 3D graphics irrupt into the analogue fabric of the image. Created by the artist Peter Burr, they represent endlessly spinning geometric shapes that either float in mid-air or on the body of the green man, whose suit functions as a green screen. 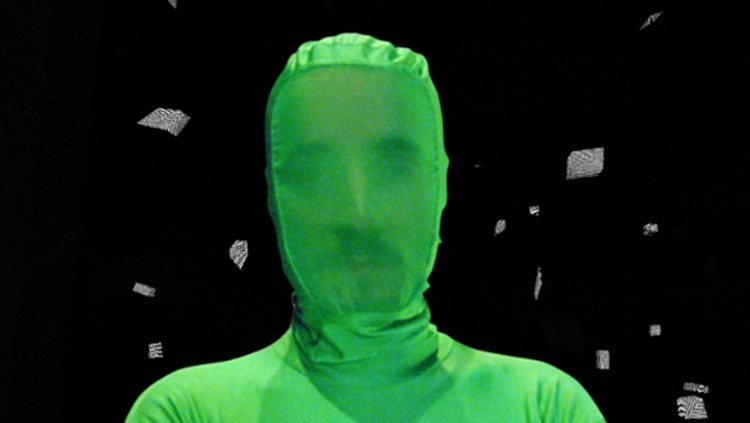 Through their rudimentary appearance, repetitive motions and limited colours – either black-and-white or the phosphorescent green of old monochrome monitors – they are reminiscent of early screen savers. As the seminar continues, the shapes accumulate, giving the impression of containing the knowledge and ideas exchanged amongst the speakers. At one point, the studio is replaced with an entirely virtual space designed in the same fashion, where the green man wanders through a breach in the wall and into a cosmos of spinning shapes, as if accessing a purely metaphysical plane.

It’s a really fun diversion and one that accentuates the film’s many dialectical layers: the irreverent approach to intellectual discourse, the comingling of seductive analogue and aggressive digital aesthetics, the Bens’ instinctive camera motions and Burr’s rule-based programming, the graphics’ simultaneously futuristic and anachronistic look… Perhaps the green man dropped acid, assimilated the abstract concepts floating around him and took off on a spacey reverie about the relationship between knowledge and art, theory and experience.

Related to The Rare Event review: metaphysical gymnastics with Bens Rivers and Russell