Artists in the houses: Berwick 2015

At this year’s borderlands festival of ‘film and media art’, multiple permutations of fact, fiction, moving images and installation spaces testified to the energies of new festival director Peter Taylor. 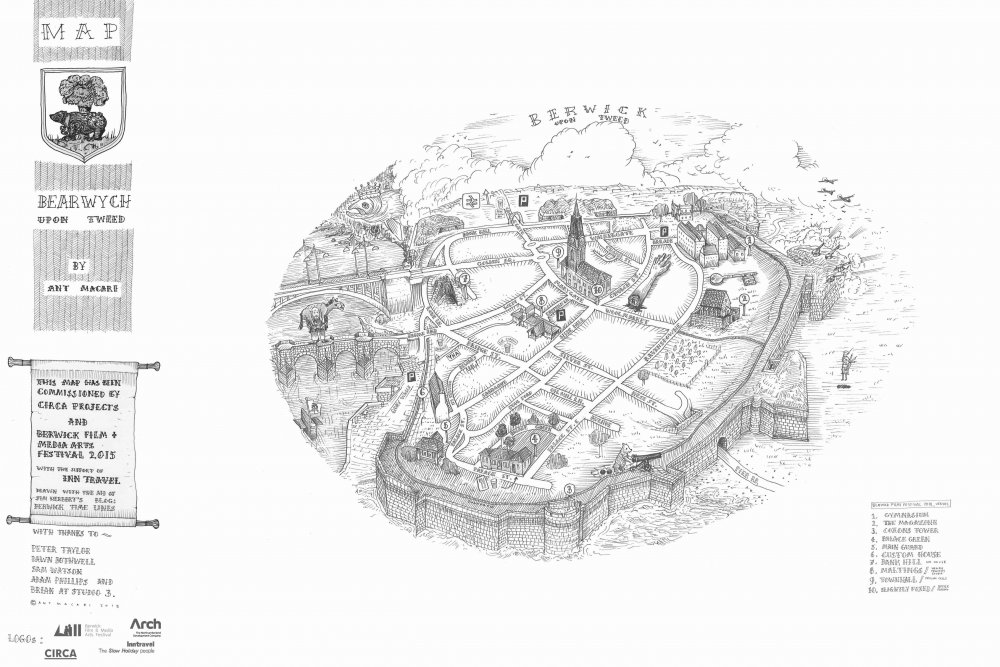 A map of ‘Bearwych upon Tweed’ for the Berwick Film & Media Arts Festival
Credit: Ant Macari

Great curiosity is always focused intently whenever a change in leadership occurs at an established cultural organisation. How will the new guard make their mark? Will they attract new audiences and keep the old ones? For some familiar with Peter Taylor, formerly a programmer at the Rotterdam film festival and director at Berwick Film & Media Arts Festival since January, an expectation of exciting film programming was a given due to his reputation for selecting challenging works.

Some changes have been obviously cosmetic, such as the abandonment of the teal-coloured branding that had become familiar at BFMAF; others seemed to rejuvenate the festival’s focus on artist’s movies. New strand Berwick New Cinema presented short and mid-length films claiming to ‘push their genre to the very limit’, and included a seminar led by academic Ed Webb-Ingall that sought to interrogate further the festival theme, Fact or Fiction, inviting artists and audiences to discuss the works shown.

Whilst such initiatives brought a fresh energy to the festival, the basic format remained the same. Historic venues, including ex-ice houses, a watch tower and the town hall, become host to moving-image installations, running alongside a robust programme of films and events at the Maltings Theatre & Cinema. That the installation venues have such weighty personalities due to their original purposes, which naturally limits curatorial options, has always created a tension at Berwick. Installations need to utilise the specific natures of their environment to enhance the experience of viewing them, lest their setting appear arbitrary. It’s a challenge that the festival has met with varying degrees of success over the years, and in Taylor’s first year it was encouraging to see thoughtful uses of the town’s venues wrought from a collaboration between curator and artists to venue selection and installation. 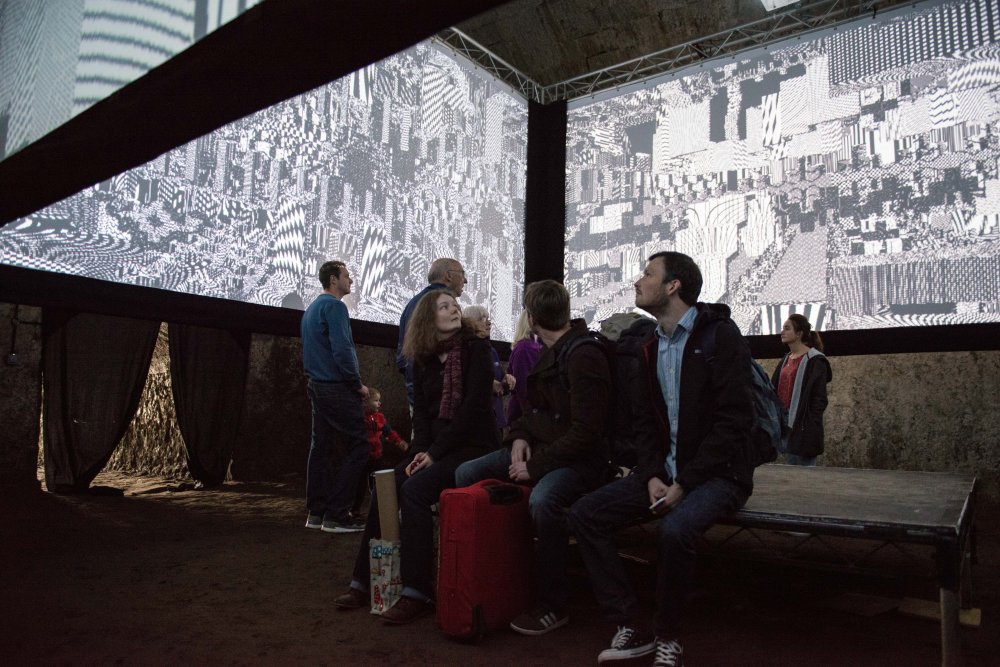 Utilising the full size and darkness of Bankhill Ice House, Peter Burr’s Cave Exits consisted of four large screens facing each other in a square arrangement, with a raised platform in their midst upon which you could stand, taking in the work by swivelling your body to view (at most) two screens at a time. Such a dizzying spectatorial experience was a compelling reinforcement of the point that Burr seems to be making about our relationship with the digital world. Presenting computer game-like imagery – the vital stats of a character, 3D mapping of an unfamiliar terrain, writing code – Burr confronted us with an ambiguous virtual environment that overwhelms and disorients. 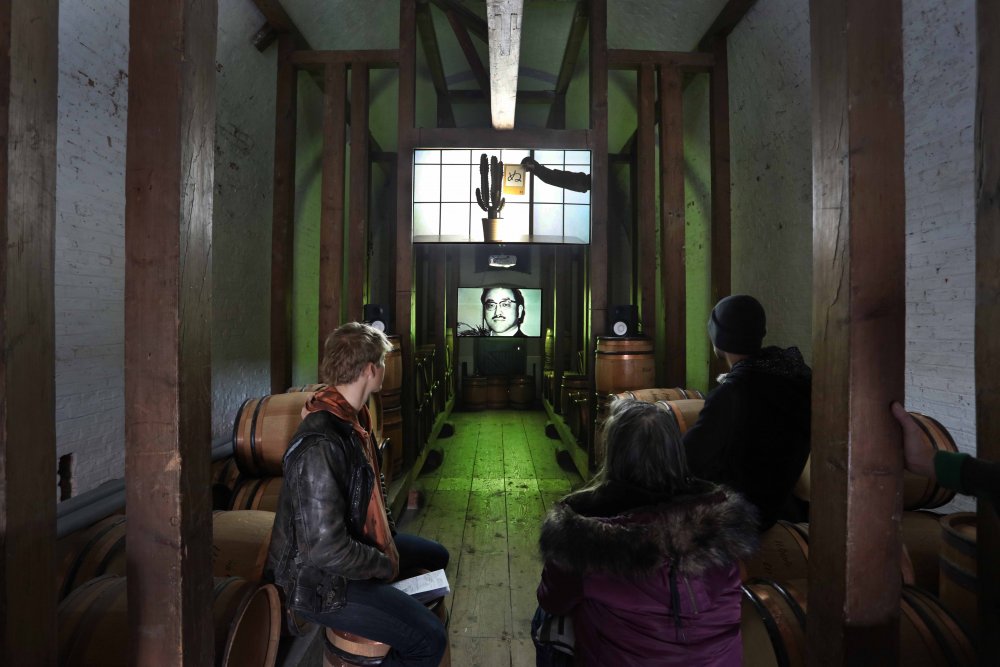 At The Magazine – formerly a gunpowder store built in the eighteenth century – Neither A nor not-A by Elise Florenty and Marcel Türkowsky used the narrow, barrel-flanked, corridor-like space to brilliant effect, positioning the two-screen work across the vertical beams, one in front of the other. This new commission demonstrated a dissection of language, where the Japanese alphabet is presented with absurdity to a cactus – a plant used (notably by John Cage) as a musical instrument – suggesting that this sound transmitter might learn new phrases. At the same time, images and sounds appear so fleetingly as to become meaningless. Neither A nor not-A’s semantic meddling had a strange and pleasurable acoustic resonance, with the repeated vocal annunciations dancing lightly off the venue’s heavy struts. 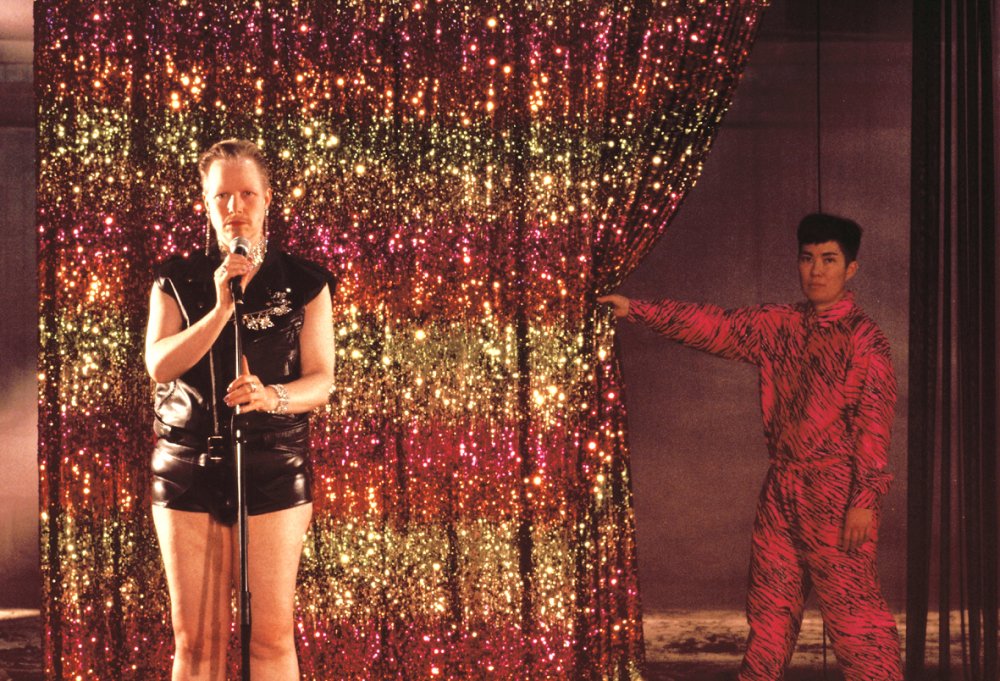 Opaque by Renate Lorenz and Pauline Boudry was installed at the Town Hall’s Council Chamber, a grand room with the ancient Berwick Coat of Arms above the door. A single screen work, Opaque sees performers Ginger Brooks Takahashi and Werner Hirsch tackle themes of resistance and visibility, with the claim “We are underground in this community.” Curtains conceal them and allow an anonymity from which to speak about oppression by an enemy, whilst an element of mime creates further distance, or perhaps protection from the words being spoken. Within the space of the Council Chamber, above its commanding speaker’s bench and viewed from the fixed seating used by local government, the theatre of political oration within Lorenz and Boudry’s insightful work was neatly reinforced. 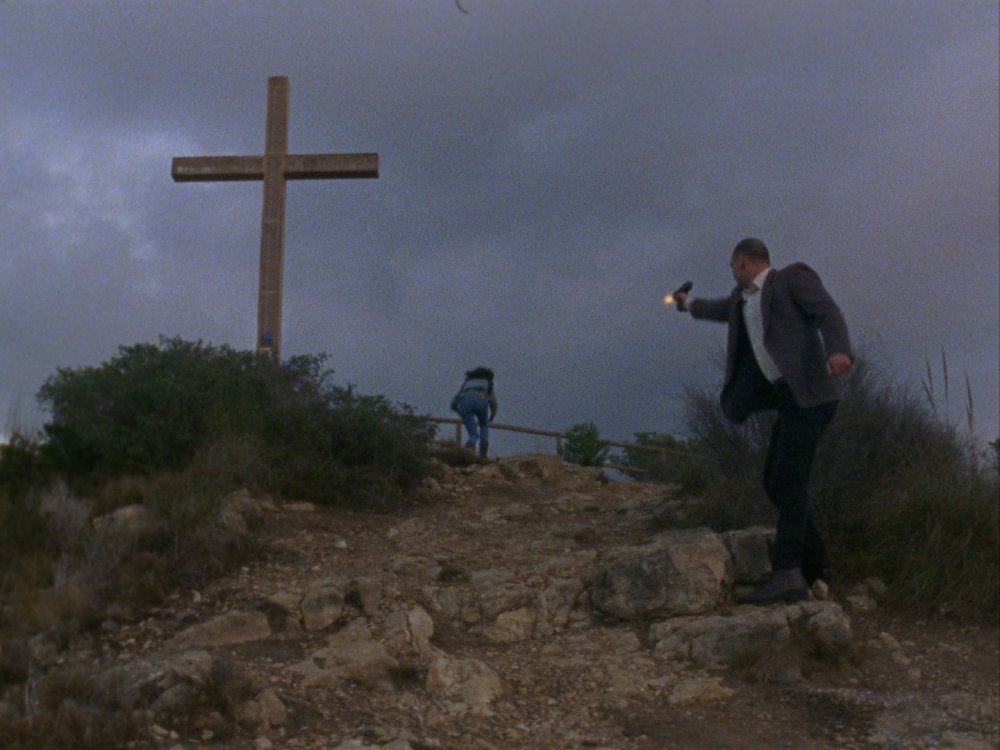 Within the feature film programme, Taylor’s selection was notable for a preference for cinema at the intersection of film and art, where the Fact or Fiction theme could be seen in the ways in which each film questions the ‘truth’ of images and sounds. A fiftieth anniversary screening of Peter Watkin’s The War Game, Salomé Lamas’s award winning No Man’s Land and the UK premiere of Ion de Sosa’s Androids Dream (Sueñan los Androides) were all solid examples of passionate programming. 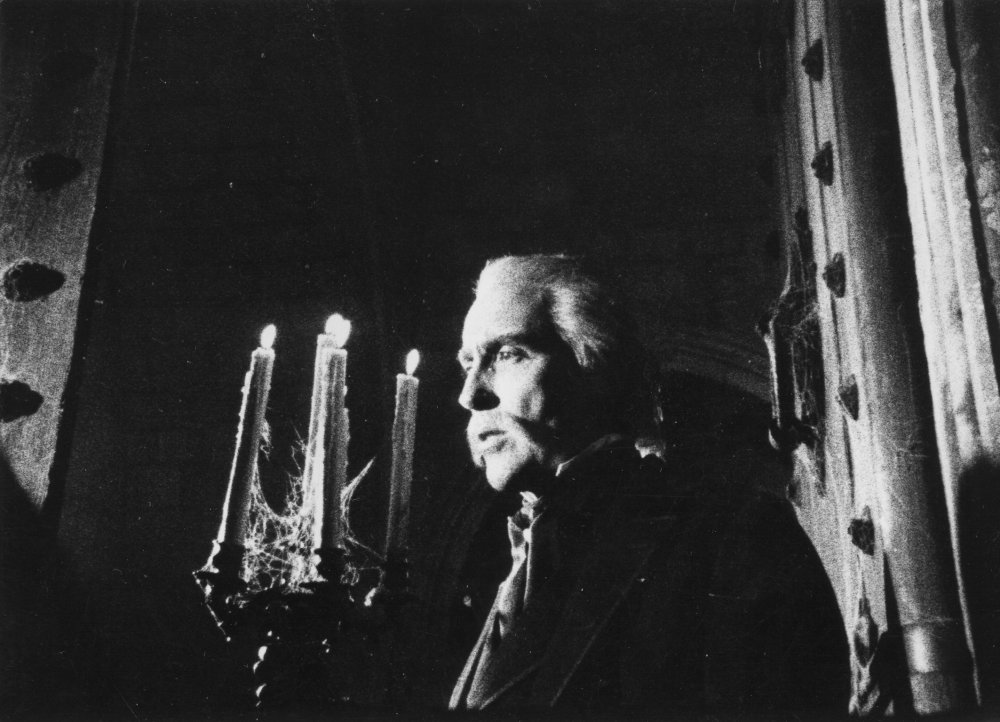 A particular pleasure was the 35mm screening of Pere Portabella’s 1971 film Vampir Cuadecuc, itself made during the shooting of Jesús Franco’s Christopher Lee-starring Count Dracula. Portabella’s film was shot in black and white and processed to high contrast, original dialogue was removed and the soundtrack by Carles Santos includes drilling, scraping, opera and jazzy piano sections. Viewing it, one’s inclination to follow the familiar Dracula narrative is undercut by the behind-the-scenes footage and Portabella’s aural and visual distortions.

Distortions of narrative were also a key success of Virgil Vernier’s Mercuriales, which first premiered at Cannes 2014 and had its first UK screening in Berwick. In this semi-improvised partial documentary, two young women, Lisa (Ana Neborac) from Moldova and Joane (Philippine Stindel), local to the Paris outskirts in which the film is set, strike up a friendship that sees them waver between unbreakable intimacy and periods of isolation. 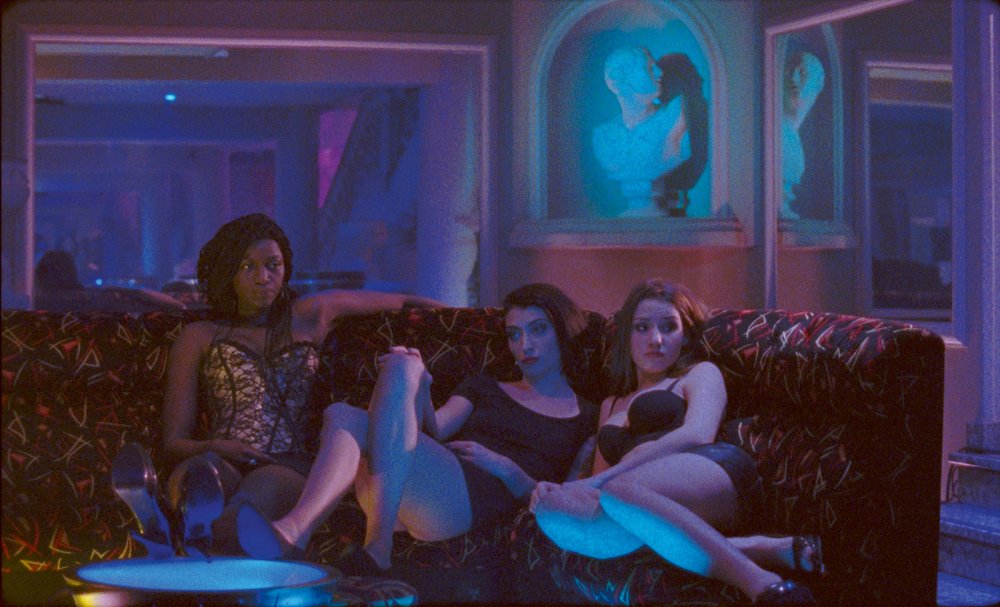 In what might be deemed a subplot (though such precise terms of structure seem irrelevant to Vernier’s film), a newly employed security guard named Tony (Sadio Nakaté) wanders the corridors of the titular tower blocks, coming to terms with his own inexperience and the curious space he now commonly inhabits. The characters across both narrative threads come to be relatable for their vulnerability, and with its meandering, ambiguous tangents and James Ferraro’s unpredictable synth soundtrack, Mercuriales puts the viewer in the same state of curiosity and susceptibility as its characters.

Beyond the film programme and installations, Berwick also offered performance, live music and storytelling, courtesy of collaborators CIRCA Projects, who curated two stimulating evenings across the weekend under the title Giff-Gaff. With such a variety of attractions on offer in Berwick this year, and Taylor’s intentions for a renewed learning programme taking place across the year, his inaugural festival makes the prospect of next year’s edition a very exciting one indeed.