The days of isolated immersion may be numbered as several powerful VR films at this year’s festival were designed to be experienced in groups, without a headset in sight. 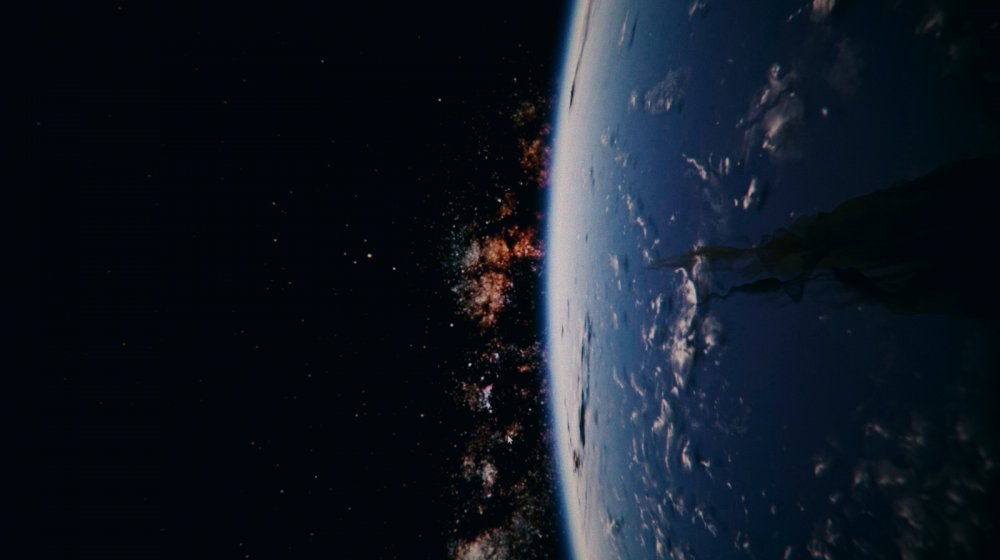 The Day the World Changed, Gabo Arora’s collective bearing of witness testimonies from the 1945 nuclear attack on Hiroshima

“When someone else is listening, you listen a little harder,” says Gabo Arora, VR creator, during his artist spotlight talk at Sheffield Doc/Fest 2018. Arora was speaking about his body of work in the evolving format of virtual reality documentary. His acclaimed seven-minute film Clouds Over Sidra, about a young refugee in Zaatari camp in Jordan, won the best interactive award in Sheffield back in 2015. Now his latest VR documentary, The Day the World Changed, part digital archive, part oral testimony, examines the nuclear attack on Hiroshima in 1945 and had its international premiere at Alternate Realities.

The Day The World Changed was designed to be seen in groups, like many selections this year. The festival occupied a large industrial warehouse with one floor given over to a VR cinema and nine major interactive installations on the ground floor.

Mass distribution of VR still proves elusive, despite investment in arcades, VR cinemas and crowd-pleasing shopping mall installations such as LucasFilm’s Secrets of the Empire. So it is exciting to see that social VR was a big feature of Dan Tucker’s curation of the Alternate Realities strand at this year’s festival.

The Day the World Changed trailer

“The Day The World Changed is the first ever collective bearing of witness of testimonies from Hiroshima,” says Arora. “So it’s a documentary but also a memorial. With virtual reality technology you can build, create and go into new worlds and stories. Something that’s become possible more recently is to have multiple players and multiple viewers inside a movie watching it together.

“So rather than sit in a cinema and watch a flat screen, now you are in the movie and often times you have a role to play,” he says.

Once inside, shadowy, distorted figures appear across ash-flecked darkness. These ghoulish companions are your fellow real world spectators, with whom you share the experience. A ball of black flames wafts between you. Arms contorted, faceless, the figures linger and creep while you explore inside Orizuru Tower in Hiroshima, commonly known as the Atomic dome. The apocalyptic ambience was only disturbed when one of my companions gave me a comic slo-mo wave. However, horror is never far away – one conspirator crept up behind me in a most disconcerting manner, albeit to take a closer look at a warped, floating, stopped pocket watch, which forever tells the time that the bomb dropped and whose owner perished instantly.

The dome is a Unesco World Heritage site, which serves as a peace memorial to the thousands killed during and after the bomb. Arora points to the sense of moral responsibility this shared VR format brings to the phenomenon of the global arms race. “If you and I witness a calamity on the street, could either of us walk away from it?” 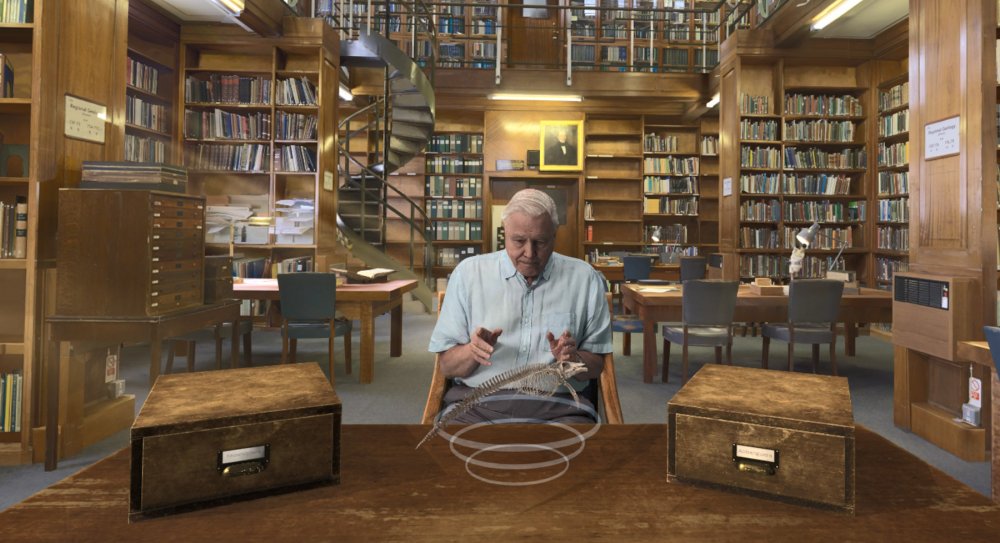 David Attenborough in Hold the World

The dome was captured through photogrammetry, the process of scanning and mapping real-world environments to render digitally in virtual reality, also well executed in Sky VR’s David Attenborough vehicle Hold the World, which allows you to inspect dinosaur fossils alongside the cherished presenter within the walls of the Natural History Museum. Photogrammetry scans provide photorealistic space in which you can physically move around – an exciting prospect for documentary VR filmmakers, although expensive to produce.

Social VR was evident in Tudor Square too, where the festival ‘igloo’ had no fewer than 17 titles showing selections in 360-degree screens, a joyfully headset-free format.

One such piece, Charlotte Mikkelborg’s The Journey, documents the painful passage through childhood for three people from Chad, Ethiopia and South Sudan. It makes excellent use of spatial sound and charming animated sequences blended with live action testimony. Sitting with three other viewers, you are free to look wherever you wish – which draws these experiences closer to what we know as traditional cinema. “I think being able to come in [to the igloo] and have an experience that is communal in the sense you can see other people’s reactions, you feel more like you’ve had an experience with them,” says Mikkelborg.

“The chances are higher that then provokes discussion, even if you’re with strangers, than if you come out of a headset and you don’t know what the other person has been watching.”

Another igloo triumph was Grenfell: Our Home, a mobile VR project produced by Parable VR and 59 Productions for Channel 4, which won this year’s audience award. The broadcaster’s first VR commission, this 15-minute piece tells the story of life inside the tower before the fire, also using animation to give vivid accounts of real people’s lives.

The fact that Grenfell: Our Home won the audience award is hugely heartening and testament to Tucker’s fantastic curation this year. There was tremendous relevance and urgency to the 2018 selections, whether they seek to help make sense of volatile and complex times or to get to grips with the drivers of global social issues.

The Loss Levels, for example, appears on first inspection to be an escapist homage to the 80s arcade game. Instead, it’s the story of a man’s grief. The creator Dan Hett lost his brother in last year’s Manchester Arena terror attack. Through the unlikely medium of a 2D game, he demonstrates the individual agonies he battles with on a daily basis. It’s an incredibly moving piece which forces you to think about the long-term aftermath of terror.

Elsewhere, Yemen’s Skies of Terror gave insight from three Yemenis into a woefully underreported war, documenting the effects of years upon years of air raids. Commissioned by Al Jazeera’s VR arm Contrast VR, this piece is evidence of a new wave of agency in immersive documentary, underscored by an impassioned speech on cultural authenticity at the festival summit by Contrast’s editorial lead Zahra Rasool.

Epic, global stories were outnumbered by supremely personal pieces. The festival commission Face to Face features the story of Michelle Fox, a mother in upstate New York who survived when her husband accidentally shoots her in the face. The blast took away her eyes, nose, and upper palate, leaving her permanently blind, unable to smell and reliant on a facial prosthesis. 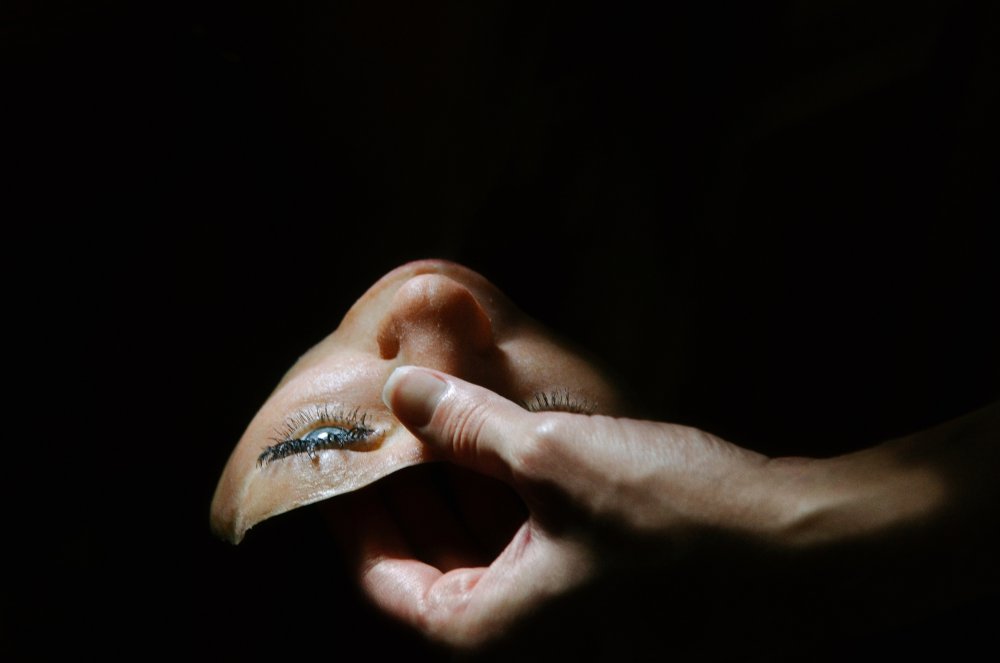 Participants come to know Fox’s story through a series of rooms modelled on her own home, in which you are encouraged to investigate, open drawers, read real-life letters, affidavits and so on. The 360 video forms just one portion of the experience. While Fox’s story and strength of character are nothing short of extraordinary, the experience was uncomfortably personal, particularly when – to view the video – you are invited to don an adapted headset that emulates Fox’s own facial prosthesis. The proximity is no doubt intentional and reflects a deeply personal documentary journey for all its creators – director Michaela Holland, photojournalist Michelle Gabel, who spent four years photographing Fox and her family, and Fox herself. Face to Face is an impressive and memorable commission for Alternate Realities, providing a slower-time perspective on gun control issues in the USA and an incredible story of resilience.

A festival highlight was Vestige – a multi-narrative piece which continued the intensely personal theme. Vestige is an evocative reverie about a young woman, Lisa, and the tragic loss of her husband Erik. Highly sensory, it guides the viewer through fragments of real memories voiced by Lisa herself. “When I’m asked what’s so special about VR, I always talk about intimacy,” says Vestige’s director Aaron Bradbury. “It is the intimacy between space and story that has the power to transform. The tangible nature of VR is what creates a special kind of empathy.”

So complex are the branching narratives, it’s possible to see the piece many times and experience something different. Vestige won many admirers in Sheffield not least because of its stunning score and powerful use of dark space, colour, beautiful 3D scans and voiceover to conjure fleeting memories of bliss and heartbreak. The strength of the lovers’ story calls to mind Solaris or The Time Traveller’s Wife, so much that many in Sheffield finished the experience weeping. There was an ingenious use of sculptural 3D art in the story crescendo which blended with the score so seamlessly that you had to remind yourself the story is in fact true. 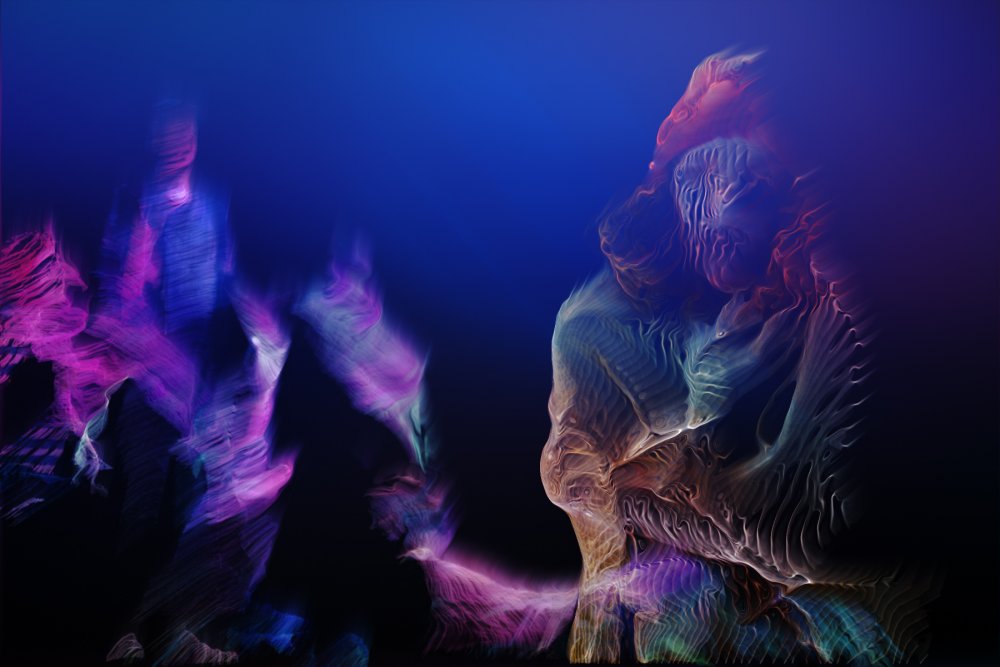 Vestige conjures the memories of a young widower

Bradbury admits the idea for Vestige initially started with its original music by Philadelphia based artist Starkey, long before he met Lisa. “The story I originally came up with came from that piece of music. Hearing it for the first time, that was the story I visualised from it,” he explains. “So the music initially told the story, and then we approached Starkey to do the full score.”

“We had to come up with a structure of music where the rhythm can be dynamically changed and overlaid with other parts of the story, but it still makes sense,” he says. “So there are underlying beds of melody overlaid with individual story music. Each individual branch has its own motif, but they all fit on top of each other.”

In short, Sheffield was rich with multi-sensory offerings, which truly show what these new mediums are capable of in the field of documentary. The warmth and humanity in the selections demonstrate an uptick in quality of output across the board over the past year, plus significant funding presence from major broadcasters. I found it a vital exploration of the human condition, told through captivating, intimate stories and the best methods technology can currently afford. Crucially, each piece did something traditional films cannot – which is why these new mediums are so exciting. Alternate Realities will, I’m sure, continue to inspire amazing practice in the years ahead.