I abject: the not-so-simple propaganda of Veit Harlan’s Jew Suss

In the first of two posts reassessing the Nazi collaborations of German director Veit Harlan, Brad Stevens scratches at the antisemitic surface of his notorious 1940 drama Jew Suss. 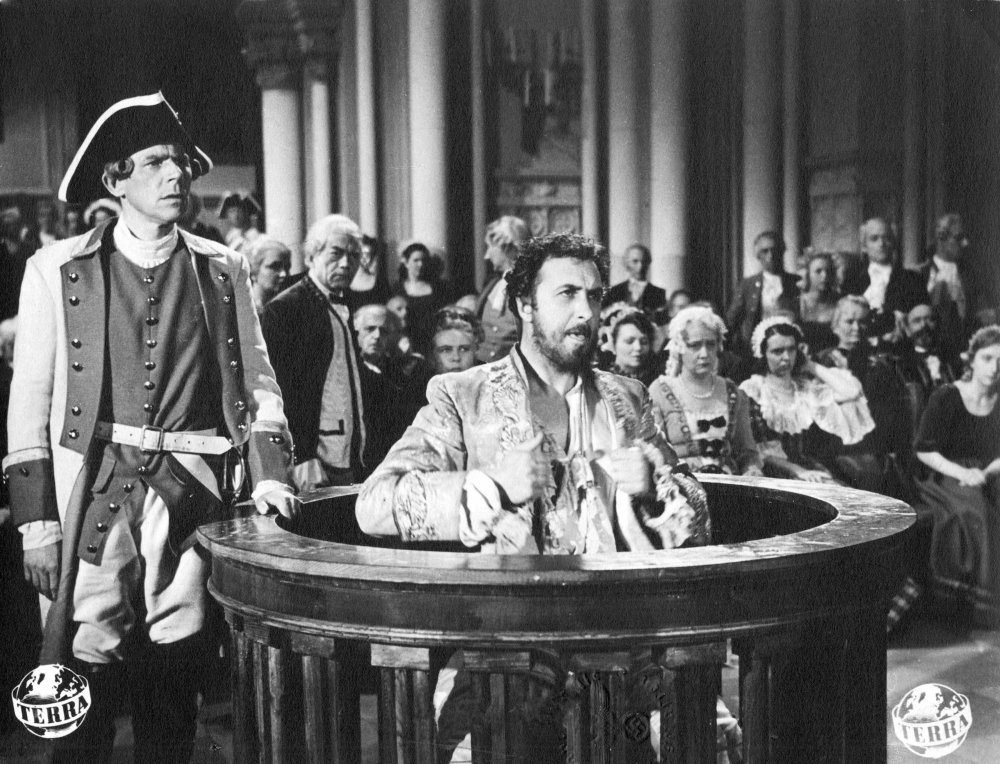 They’ve got it infamy: Ferdinand Marian as Joseph Süß Oppenheimer on trial in Veit Harlan’s

“We have no hesitation in saying that if this is propaganda, then we welcome propaganda.”

A 2008 Region 1 DVD edition of Jew Suss published by RaroVideo is still available via online retailers.

That is how Michelangelo Antonioni, in his Venice Film Festival report, responded to Veit Harlan’s Jew Suss (Jud Süß, 1940), a film which went into production at the prompting of Joseph Goebbels, and has the reputation of being among the most antisemitic ever made.

Antonioni’s favourable notice is usually regarded as at best a youthful indiscretion, at worst evidence of support for fascism. While watching this notorious work for the first time, however, the word “if” struck me as especially well chosen. For if Jew Suss is propaganda, it is propaganda of a rather peculiar kind. 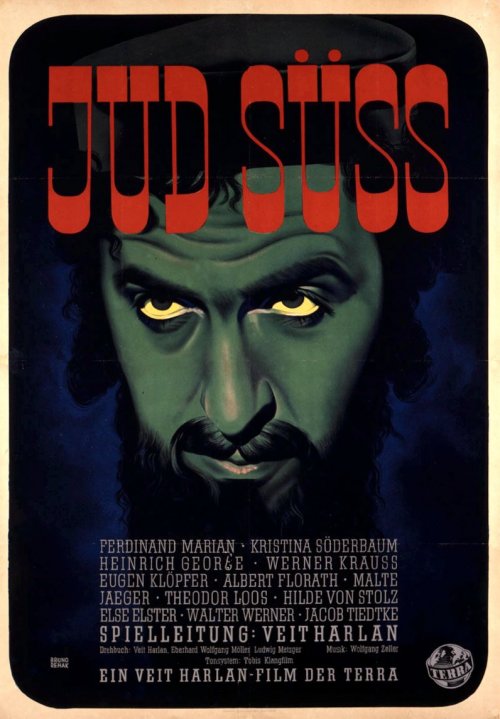 There is, of course, no doubt that the film contains several unambiguously antisemitic moments (notably those scenes in which Jewish characters discuss how to control gentiles by loaning them money), and that its immediate impact was entirely reprehensible. (Felix Moeller’s 2009 documentary Harlan in the Shadow of Jud Suss provides chilling evidence of this.)

Yet, although Antonioni described it as a work in which “no episode is in conflict with any other, a film of harmony and complete unity”, Jew Suss – like Harlan’s Opfergang (1944), which I will discuss in next month’s column – is one of those incoherent texts whose cracks and fissures are precisely what render it fascinating. Whereas the aesthetic of Leni Riefenstahl’s Triumph of the Will (1935) is perfectly compatible with fascist principles, Harlan’s oeuvre (which has far fewer defenders) belongs to a complex narrative tradition that is inimical to the demands of ideological indoctrination.

Jew Suss’s protagonist Joseph Süß Oppenheimer (Ferdinand Marian), very loosely based on a genuine historical figure of the 19th century (he had been the subject of a novel of the same title by Jewish author Lion Feuchtwanger), is a Jew who infiltrates the court of Karl Alexander (Heinrich George), the Duke of Württemberg, and sets about causing as much trouble as possible. His antagonist is Karl Faber (Malte Jaeger), a young Aryan whose wife, Dorothea (Kristina Söderbaum, who would soon marry Harlan), is raped by Süß. When Dorothea subsequently commits suicide, Faber encourages the citizens of Württemberg to storm the palace, and Süß is publicly executed.

Despite its notoriety, Jew Suss has dated surprisingly well, since modern viewers are likely to find Süß’s project – he sets out to throw gentile society (implicitly Nazi Germany) into chaos in revenge for the way it has treated his people – entirely reasonable. Far from being naively welcoming individuals whose trust he betrays, the gentiles Süß encounters are rabid antisemites who despise him on sight.

The most remarkable thing about Harlan’s film is that, to a certain extent, it goes out of its way to accommodate this reading. The key moment is Süß’s initial encounter with Faber, who immediately recognises him as a Jew and, when asked if he can recommend a hostel, coldly responds: “There are no Jew hostels in Stuttgart.”

How are we to read this? Although Faber is ostensibly positioned as the voice of wisdom (his distrust of this stranger will ultimately prove justified), he here comes across as gratuitously rude, whereas Süß is admirably restrained (a close-up suggests he is genuinely hurt by the remark).

The widespread tendency to unambiguously reject Jew Suss is surely rooted in an assumption that its surface antisemitism was unambiguously accepted by German cinemagoers, who supposedly took Faber at face value. But is audience response ever so crudely schematic? Although one might have expected Harlan to at least go through the motions of making Faber an identification figure, there is little onscreen evidence to suggest we should regard him as anything other than a tedious snob. Emotionally, the film is entirely committed to Süß, whose passion and energy provide a welcome relief from the dull conventionality of Faber’s romance with Dorothea. The camera frequently adopts Süß’s viewpoint, swooping forward to show us exactly what he is seeing as he spies on the Duke through a concealed hole. 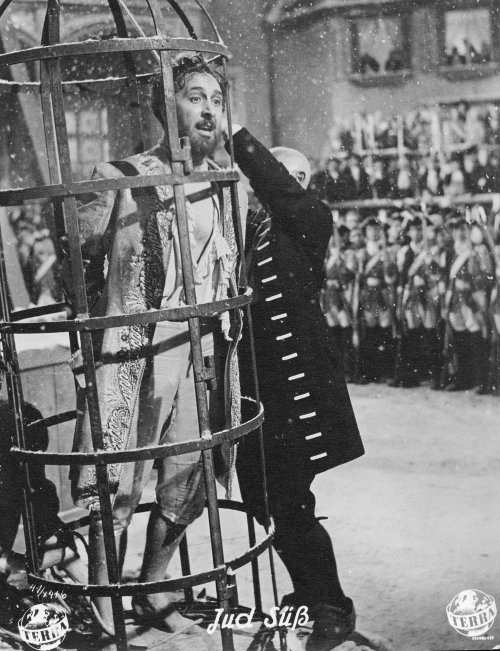 An especially notable point-of-view shot can be found in the final sequence, which, with its suspended cage imagery, bears a striking resemblance to the opening scene of Orson Welles’ Othello (1952). Indeed, this may be more than a coincidence, since Welles had played the role of the Duke in a stage production of Jew Suss at the start of his career, and thus might have been curious enough to seek out Harlan’s film.

As the cage in which Süß has been locked is raised, Harlan cuts to Faber, who is standing in the crowd with a look of pious satisfaction on his face, then tracks back, forcing us to see what Süß sees, experience what he experiences, as he is hauled towards his death. Every detail of Harlan’s mise en scène – the falling snow, the sound of drums, the cutting between distant shots of Süß pleading and close-ups of silently judgmental observers, the callously harsh gesture with which the supervising official signals to the hangman – conveys a sense of sadness and mourning, rather than providing us with a feeling of satisfaction at seeing a villain receive his just desserts. As we watch a terrified Süß begging for his life, we might recall our final glimpse of Fagin in the death cell in Charles Dickens’ Oliver Twist (another problematically antisemitic text), his former eloquently seductive speech patterns dissolved into an almost meaningless babble.

In this context, the reading of a declaration ordering all Jews to leave Württemberg, with which Jew Suss abruptly ends, feels more like the last nail in the coffin than the solution to a problem. Although the Jews are treated as collectively guilty, Süß is shown manipulating them as shamelessly as he manipulates the royal court, the dignified Rabbi Löw (Werner Krauss)’s criticisms of his behaviour (“You have become as vain and arrogant as a peacock”) carrying a surprising weight. 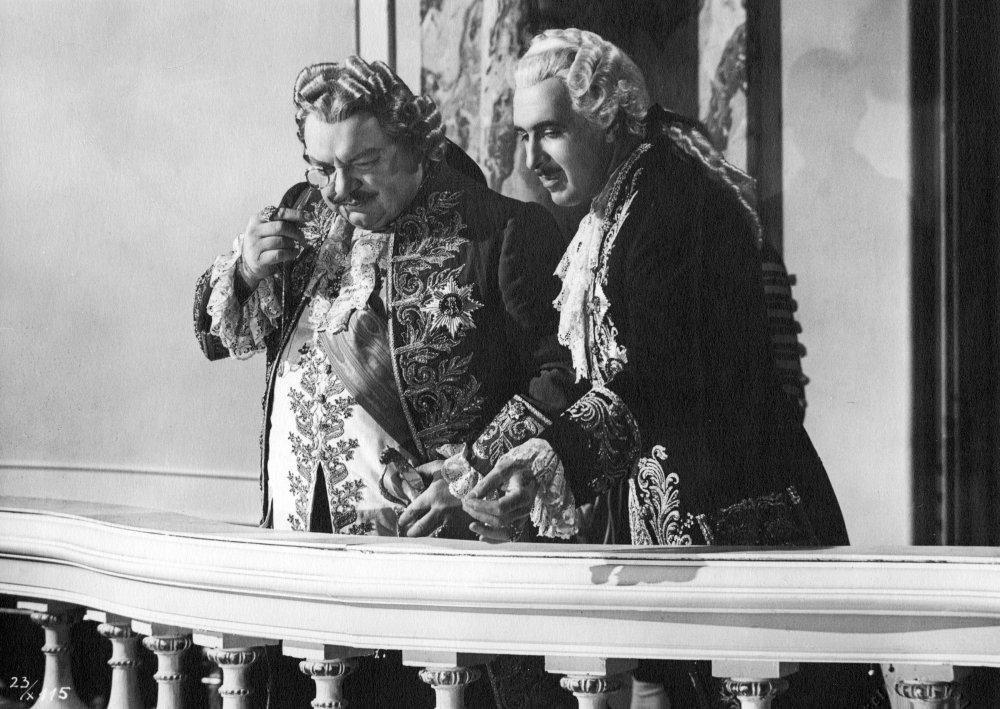 Harlan explicitly portrays the worlds of Jew and gentile as mirror images of each other: as Karl Alexander makes his inauguration speech (“My people, my land”), the camera pans down to discover the royal crest, dissolving from this to a Hebrew sign outside Süß’s home in the ghetto. If Württemberg is corrupted by Süß (who also regards its people and land as his personal property), the film makes it clear that this Jewish interloper had a great deal to work with, the Duke’s narcissism and greed being established right from the beginning as he leers at an attractive woman while being driven towards the palace.

Süß merely releases forces already lurking beneath the surface, and if he is a Satanic figure, he is one with distinctly Blakean qualities. Perhaps what William Blake said of Milton might also apply to Veit Harlan: he “was of the Devil’s party without knowing it”.

Related to I abject: the not-so-simple propaganda of Veit Harlan’s Jew Suss