In this issue: Gael Garcia Bernal in Pablo Larraín’s No, plus Caesar Must Die, Somersault, Pier Paolo Pasolini and Montgomery Clift.

In print and digital from 8 February. 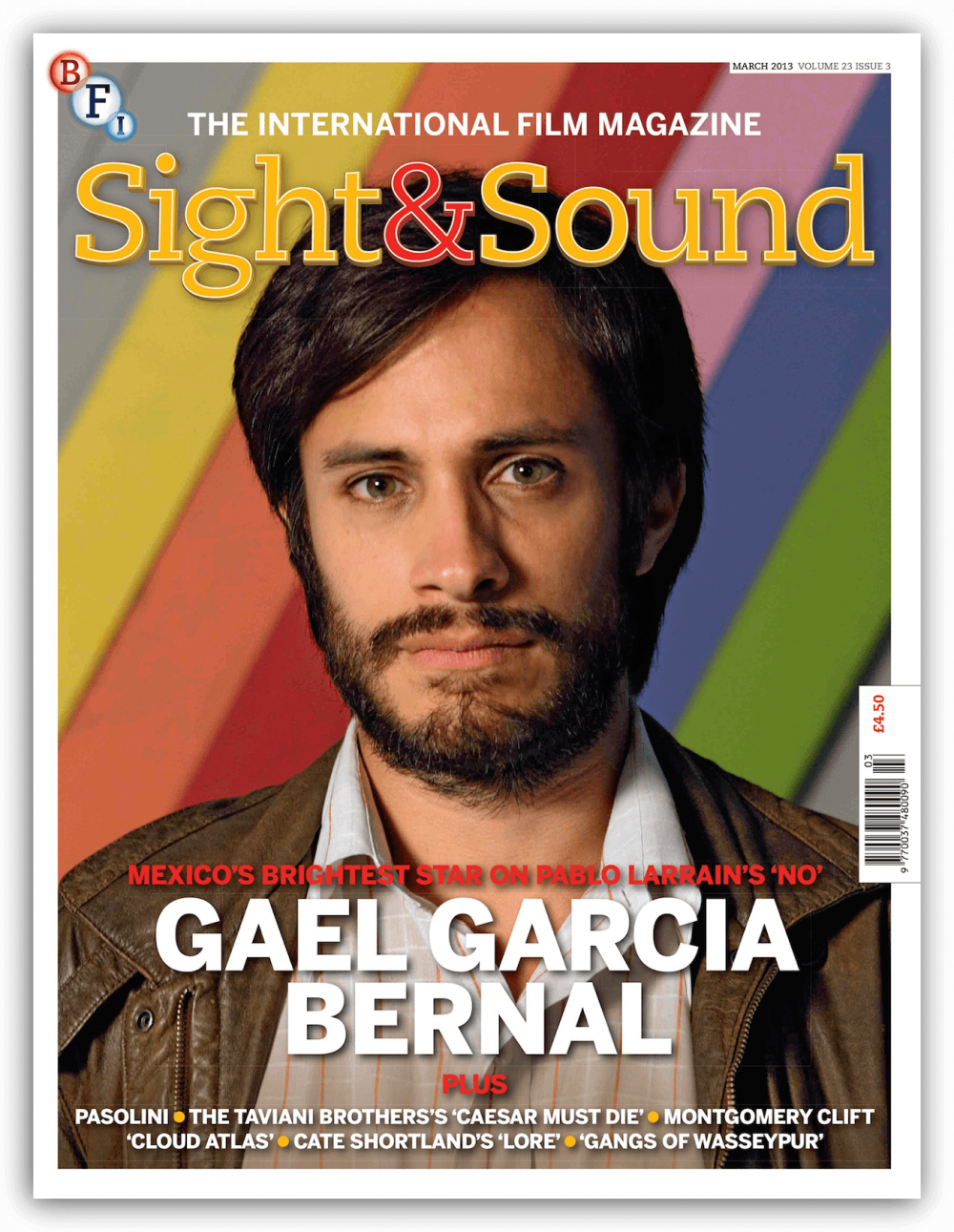 Filmmakers who are hard to pigeonhole are the linking theme of our March issue. We kick off with Chilean director Pablo Larraín, who tells Jonathan Romney about his exciting new feature No [review], which melds politics, history, biography and visual invention as it chronicles the remarkable true story of the cola-like ad campaign to rid Chile of Augusto Pinochet in the mid-1980s. No is Larraín’s third film in a row to tackle the Pinochet era, but in other respects it’s a bold departure from the sombre moods that characterised his earlier features Tony Manero (2008) and Post Mortem (2010).

The man behind the creative ad campaign in No is played by the Mexican star Gael Garcia Bernal, another figure who’s resisted easy pigeonholing. Bernal may have burst onto the scene as the handsome star of Amores Perros and Y tu mamá también, but his career since has seen him direct, produce, travel to Hollywood, and even set up his own film festival. He talks to Mar Diestro-Dópido.

Similarly restless in spirit are Italy’s Taviani Brothers, who though now both well into their 80s, return with their grittiest film to date, the Golden-Bear winning Caesar Must Die, a raw slab of Shakespeare filmed in a Roman prison, with inmates making up the cast. Vittorio Taviani tells Pasquale Iannone about the unique challenges they experienced making the film.

Another Italian filmmaker who could never be accused of turning away from troubling and controversial material is Pier Paolo Pasolini. On the eve of a major retrospective of the great director, poet, artist and writer’s films at BFI Southbank, Hannah McGill revisits his 1964 masterpiece The Gospel According to Matthew, and Mark Cousins imagines how the world today might look had Pasolini never existed.

Little about Australian director Cate Shortland’s debut feature Somersault prepared us for her new film Lore, based on the novella by Rachel Seiffert, which tracks a teenage girl and her siblings across divided Germany in 1945. Shortland talks to Nick James about the deep research into the period that informs her film.

And if you’re after a dose of Hollywood glamour (mixed in with a balancing shot of tragedy and melodrama) then you’ll want to turn to our profile of the beautiful – and certainly troubled and complex – Montgomery Clift. Eric Hynes revisits the career of one of Hollywood’s most extraordinary actors, and considers the sizzling romantic chemistry Clift had with Elizabeth Taylor – his co-star in A Place in the Sun and, he said, the only woman he would ever love.

We also have an in-depth interview with the great British cinematographer Chris Menges, and our annual obituaries feature, in which we remember those from the world of cinema who passed away in 2012.

Our comprehensive reviews pages include in-depth looks at Cloud Atlas, Compliance, Gangs of Wasseypur and To the Wonder, and our Home Cinema pages review a sumptuous new Blu-ray release of von Sternberg’s The Blue Angel, the film that introduced the world to Marlene Dietrich. You may find yourself falling in love again with the cinema…

COVER FEATURE: The Future is No

Pablo Larraín completes his Pinochet trilogy with No, a portrait of an adman who sells the rejection of the dictator the same way he sells cola. By Jonathan Romney.

PLUS Mar Diestro-Dópido talks to the film’s star, Gael García Bernal, and Kim Newman surveys how the movies have portrayed the world of advertising.

Children of the Damned

Australian director Cate Shortland’s Lore offers a new angle on Germany at the end of WWII, seen through the eyes of a 15-year-old as she crosses the war-ravaged land. By Nick James.

After years of neglect by UK distributors, the Taviani brothers are back with their grittiest film yet, Caesar Must Die. By Pasquale Iannone.

The rerelease of Pasolini’s The Gospel According to Matthew gives a chance to rediscover this most misunderstood of filmmakers, says Hannah McGill.

PLUS Mark Cousins on what his work teaches us.

A Place in the Sun marked a pinnacle of complexity and ambiguity in the actor’s work, says Eric Hynes.

The British great DP looks back over his career with Jo Comino.

Michael Brooke on the BFI’s celebration of the steel industry on film.

Object Lesson: Hannah McGill on the various meanings of the cowboy hat.

Dispatches: Mark Cousins on when a film is a portrait.

Development Tale: Charles Gant on how Broken got put back together.

The Numbers: Charles Gant on the box-office phenomenon of Life of Pi.

Bob Mastrangelo’s survey of the film greats and lesser-knowns who left us during 2012.

Olaf Möller on a season of activist cinema by India’s Anand Patwardhan.

John Beagles on artist Duncan Campbell’s forays into the archive.

Sam Dunn wonders why so much interesting British cinema is missing from DVD.

Other new releases reviewed in this issue

Babeldom
The Bay
Breath of the Gods
Broken
Broken City
Caesar Must Die
Chained
Crawl
Fire in the Blood
Fire with Fire
For Ellen
Gangster Squad
The Guilt Trip
Hi-So
King of Pigs
The Last Stand
Lore
Mama
Mea Maxima Culpa: Silence in the House of God
No
Parental Guidance
Parker
Reign of Assassins
The Road A Story of Life and Death
Robot & Frank
Run for Your Wife
Safe Haven
Side by Side
Stoker
Texas Chainsaw
This Is 40
Trashed
Verity’s Summer
The Wee Man
Won’t Back Down
Zaytoun

David Thompson on Sternberg’s discovery of his muse in The Blue Angel.

Michael Brooke sees signs of things to come in Kubrick’s Fear and Desire.

Beloved Infidel
The Confrontation
Cut to the Chase! The Charley Chase Collection
Films by Jess Franco
From Beyond
From the Sea to the Land Beyond
It’s in the Bag
The Lickerish Quartet
Once upon a Time in America
Something Wild
The Titfield Thunderbolt
Warner Archive Film Noir
Wild River

Nick Pinkerton savours a survey of the western.

Isabel Stevens on film and the visual arts.