Keeping Bollywood routines at ironic distance, Anurag Kashyap’s sprawling, scintillating gangster saga could be the international breakout that Indian cinema has been waiting for. 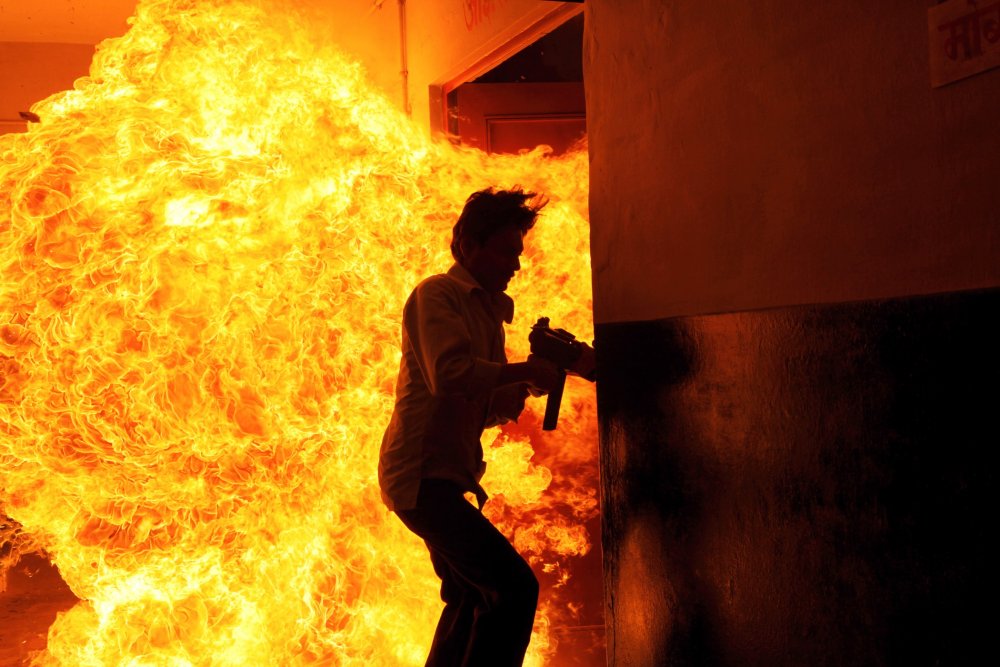 Anurag Kashyap first came to prominence in filmmaking circles for writing Ram Gopal Varma’s Satya (1998), one of Indian cinema’s best examples of the gangster genre. However, his feature-directing debut, the visceral abduction drama Paanch (2003), went unreleased; his next film, Black Friday (2004), a procedural about the 1993 Mumbai bomb blasts, was initially banned in India and released only after a long court process; and 2007’s No Smoking divided critics and failed to find favour with audiences.

All this while, Kashyap was earning a living writing mediocre Bollywood movies, but he was also beginning to acquire a cult following among discerning audiences and the country’s independent film community. Then in 2009 came his first box-office success: Dev D, an edgy, drug-fuelled adaptation of Sarat Chandra Chattopadhyay’s tragic 1917 novel Devdas. At the same time, Gulaal, his hard-hitting take on small-town student politics, won festival acclaim, as did its 2010 follow-up, That Girl in Yellow Boots.

Thanks to changing audience tastes in India, driven by a largely young population, his films are now perceived to be cool. He acts as creative producer on pictures made by some of the country’s brightest independent talents, and although he dislikes the term, he has been dubbed the ‘Godfather of Indian independent cinema’.

It is perhaps then wholly appropriate that Kashyap’s latest film and his most ambitious to date, Gangs of Wasseypur, released in two parts, is in many ways a homage to The Godfather movies. Kashyap set out to make, in his own words, a commercial film, and simply to have fun.

The Godfather, so to speak, of the film’s first part is Sardar Khan, played by Manoj Bajpayee (who was one of the lead gangsters in Satya). As written by Kashyap and his team, Sardar is on the one hand a gangster seeking revenge on his nemeses, the Qureshi clan and mine-owner turned politician Ramadhir Singh. On the other, Sardar is often helpless before his rampant libido and has to contend with both his wife and his mistress, two equally feisty women.

Sardar is just one of the well-etched characters in a film teeming with them. Ramadhir, played magisterially in his first feature-length role by Tigmanshu Dhulia, a director in his own right, is another, as is Sardar’s second son Faisal, the Michael Corleone character, a pot-smoker who is reluctantly thrust into a decades-long gang war; the part is interpreted magnificently by Nawazuddin Siddiqui, an actor who is fast becoming the face of Indian independent cinema.

Though the film is undoubtedly Kashyap’s most accessible and hence commercial to date, it doesn’t bear any resemblance to the routine Bollywood fare churned out by Mumbai’s dream factories. Bollywood is, though, a living, breathing presence in Gangs of Wasseypur: several characters are hugely influenced by Bollywood movies and style themselves in the manner of its popular stars; the film is punctuated by hit Bollywood songs, which also serve to denote the passage of time; and the mobile ringtones of practically any character with a phone is a Bollywood song. Cleverly, Kashyap and his writers have made the main antagonist, Ramadhir, resolutely anti-Bollywood. In a memorable monologue, he explains that the reason for his longevity is that he doesn’t watch the movies; his opponents’ relatively short lives, he believes, can be attributed to their desire to emulate the lifestyles of Bollywood stars. 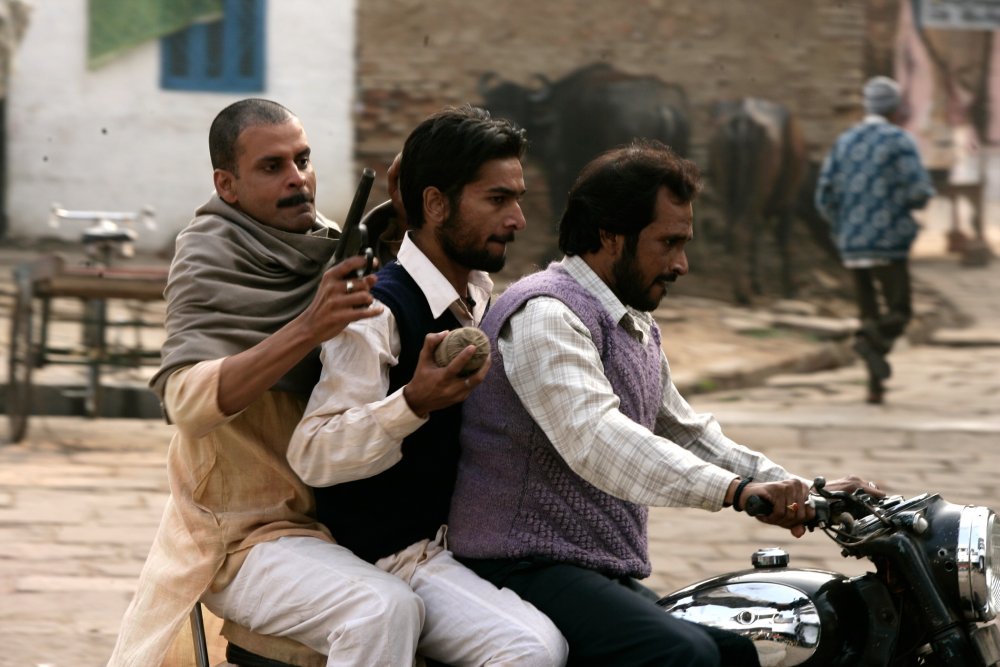 Another area where Kashyap scores is his choice of locations rarely seen in mainstream Bollywood films, with Rajeev Ravi’s restless camera capturing both the beauty and the shabbiness of small-town northern India. Wasiq Khan’s production design is meticulous, subtly delineating the changing periods with the introduction of film posters or household products. The locations mark a return to his roots for Kashyap, who was born in the area and grew up there. Setting films in authentic small-town India is a practice that’s been popularised recently by Tamil filmmakers Bala, Ameer Sultan and M. Sasikumar, and Gangs duly carries a dedication to them in the opening credits.

Gangs of Wasseypur is, then, an adrenalin shot of a film, powered along by an inventive score by Sneha Khanwalkar that’s a grab-bag of diverse genres including north Indian folk, electronica and even Indo-Caribbean reggae. However, fatigue sets in during the second part, when the relentless eye-for-an-eye revenge-taking becomes repetitive. This is partly redeemed by a bloodsoaked bullet ballet of a shootout set in a hospital, comparable to similar sequences in John Woo’s Hard Boiled (1992).

The five-hour-plus running time and the plethora of characters might be daunting for some, but overall the sheer pace and drive of Kashyap’s bravura approach ensure that once the film hits its straps it barely pauses for breath. Like Olivier Assayas’ Carlos (2010) and Jean-Francois Richet’s Mesrine films (2008), this is a movie where the two parts are best watched back to back with a short break, all the better to inhabit the noisy and colourful world of Wasseypur. 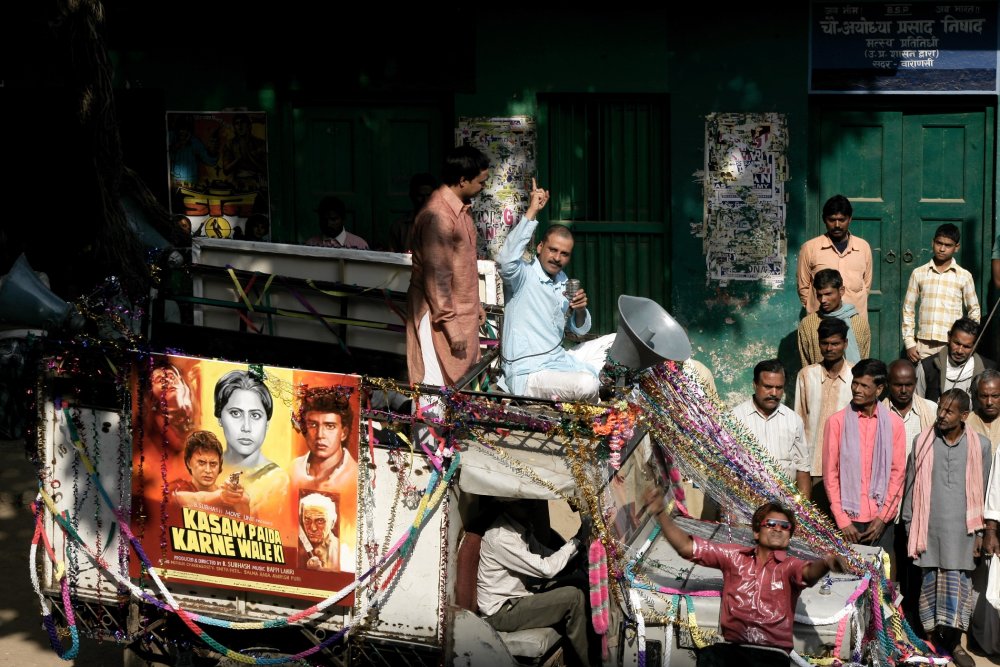 Indian cinema has long been trying to produce a breakout film that will appeal to international audiences in the manner of Crouching Tiger, Hidden Dragon (2000) or City of God (2002). Unfortunately, most of the resulting films have been an uneasy mix of Western filmmaking techniques and predominantly English-language dialogue, set in milieux that international audiences are supposedly comfortable with. Unsurprisingly, these crossover films have appealed neither to Indian audiences nor global ones.

The late great Satyajit Ray maintained that he made films primarily for his native Bengali audience – any global recognition that followed was a bonus. Kashyap seems to have embraced this philosophy and created a film that’s uniquely Indian, despite having some Western influences. Festival acclaim has duly followed, with packed screenings at Cannes, Sydney, Toronto and Sundance among others, leading to commercial release in France and now the UK.

Perhaps Gangs of Wasseypur and other breakout Indian films from 2012, including Cannes selections Miss Lovely and Peddlers (produced by Kashyap), are a harbinger of things to come. The fact that independent productions Wasseypur and Peddlers were co-funded by mainstream Bollywood studios is also a welcome indication that the Bollywood machine is no longer wary of risking its coin on differently themed films.