In this issue: Frances Ha’s Greta Gerwig – the most exciting actress in America? Plus Ryan Gosling in Only God Forgives, Wadjda, The Wall, Jean Grémillon and a Deep Focus on the essay film. In print and digital from 5 July. 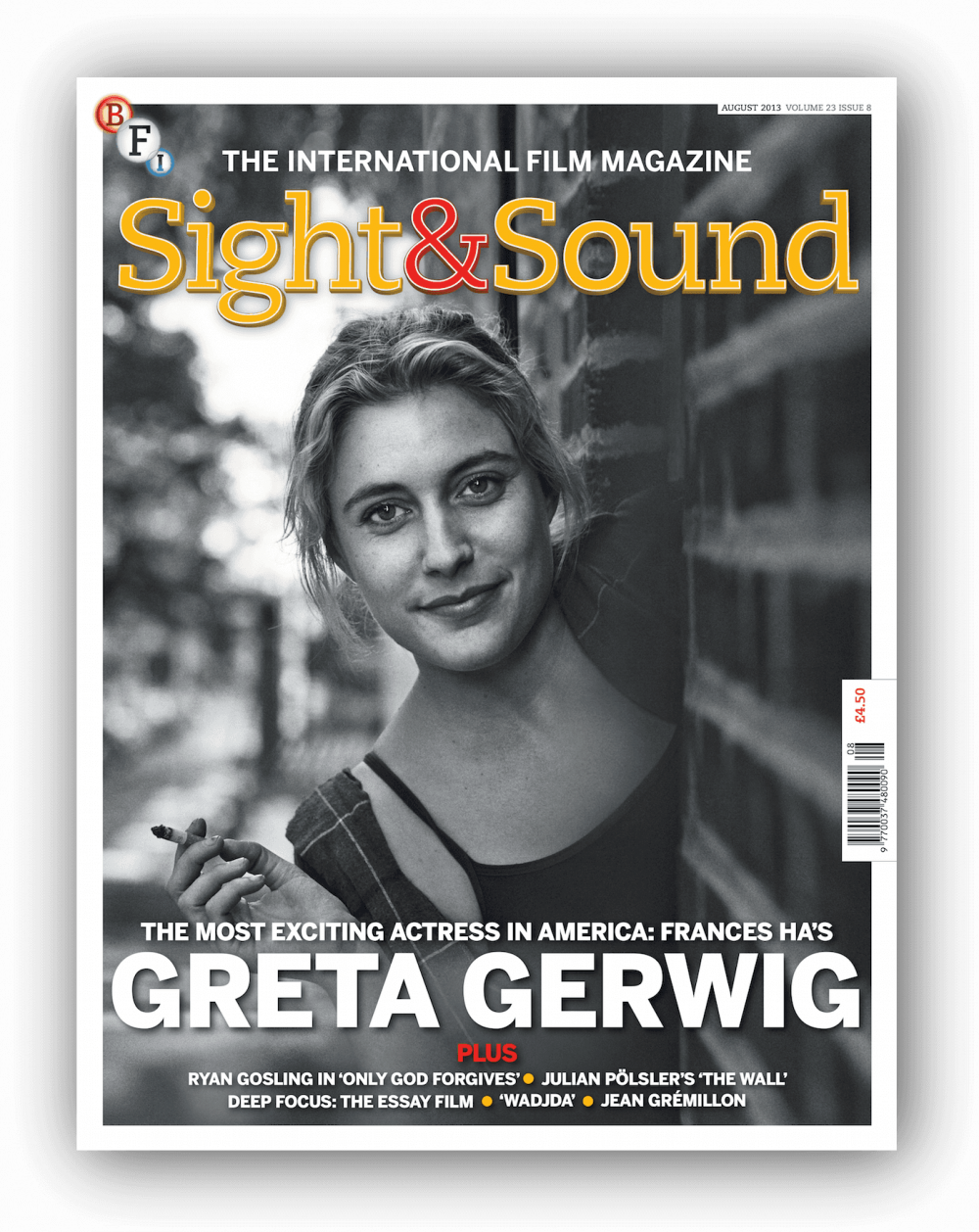 The captivating Greta Gerwig is our August issue cover star, an actress we’re not afraid to ringingly declare the most exciting working in America today. Her latest film Frances Ha, a beautifully observed seriocomedy co-scripted with and directed by her partner Noah Baumbach, in which she plays a scatty twentysomething struggling to get a handle on her life in New York, not only sets a new benchmark for Gerwig’s talents but also feels like the perfect summer film. Baumbach and Gerwig talk to Trevor Johnston about embracing and superseding the influence of Woody Allen and how they set about constructing the key planks of Frances’s life and personality.

Two other featured films this month explore the lives of female protagonists, which the accent on overcoming restrictions, be they socially imposed or more elusively existential. Wadjda is the first ever film to be shot in Saudi Arabia, even more surprisingly by a woman, Haifaa al Mansour. She talks to Isabel Stevens about the difficulties of financing her debut feature, which focuses on an irrepressible young girl – winningly incarnated by Waad Mohammed – who sets her heart on acquiring a bicycle, despite the disapproval this inevitably elicits in highly segregated Saudi society.

Julian Pölsler’s The Wall, meanwhile, overturns many of our assumptions about Austrian cinema, with its moving narrative, lush restraint and lyrical beauty. He talks to Jonathan Romney about the film’s striking governing metaphor, a mysterious invisible barrier that springs up in the Alps one day and traps a lone woman (the brilliant Martina Gedeck).

This month affords a rare opportunity for audiences in London and Edinburgh to familiarise themselves with the glittering oeuvre of the unfairly overlooked Jean Grémillon, whose career as both a feature filmmaker and documentarian during the golden age of French cinema in the 30s and 40s is surveyed by Ginette Vincendeau. Some flavour of what to expect is conveyed by the following quote from Grémillon in 1953, on the subject of realism, which for him entailed not simply surface naturalism, but ‘the discovery of that subtlety which the human eye does not perceive directly but which must be shown by establishing the harmonies, the unknown relations, between objects and beings’. Can’t argue with that.

Our latest Deep Focus grapples with the essay film, a slippery, elastic form that is hard to define and yet somehow instantly recognisable, numerous examples of which can be seen at an accompanying season at the BFI Southbank throughout August. Andrew Tracy traces the essay film’s lineage back to the Soviet montagists, on through the Griersonian documentary tradition until its post-war flowering in the hands of Chris Marker and Alain Resnais, who opened the floodgates for directors as varied as Jean-Luc Godard, Fernando Solanas, Harun Farocki and Patrick Keiller.

As usual there’s a full round-up of all the latest theatrical releases, including in-depth analyses of the striking Spanish film Blancanieves, the concluding part of Ulrich Seidl’s superb Paradise trilogy Paradise: Hope, and the documentary Pussy Riot: A Punk Prayer, plus reviews of all the best recent DVDs and film books. It’s a packed issue, perfect for the summer deckchair.

A collaboration between director Noah Baumbach and Greta Gerwig, the “Meryl Streep of mumblecore”, Frances Ha is a film that reconciles well-trodden themes of New York indie cinema with physical comedy, emotional depth and a knowing affection for the nouvelle vague. By Trevor Johnston.

Director Noah Baumbach and co-writer and star Greta Gerwig talk us through the key elements of Frances Ha.

Kid on a Bike

The first film ever to be shot in Saudi Arabia by the country’s first female director, Wadjda charts the injustices faced by Saudi women through the eyes of a girl who dreams of a bicycle. Haifaa al Mansour explains how she made her film in a land where cinemas are illegal. By Isabel Stevens.

Only God Forgives may reunite maverick Danish director Nicolas Winding Refn with star Ryan Gosling, but there’s more to it than just a rehash of their 2011 hit Drive. By Kim Newman.

Plus: The life of Ryan. His ascent to the Hollywood A list may seem effortless but in getting there, leading man of the moment Ryan Gosling has shown an ironic self-awareness and notable good taste. By Hannah McGill.

For a post-apocalyptic landscape, the Austrian Alps are a domineering, photogenic departure. All the more impressive, then, that The Wall director Julian Pölsler has captured Marlen Haushofer’s novel of separation and survival in its intended setting without sacrificing its interior humanity. By Jonathan Romney.

Reach for the sky

In recent years the essay film has attained widespread recognition as a particular category of film practice, with its own history and canonical figures and texts. In advance of a major season throughout August at London’s BFI Southbank, Sight & Sound explores the characteristics that have come to define this most elastic of forms and looks in detail at a dozen influential milestone essay films, from Jean Vigo to Chris Marker. By Andrew Tracy, with contributions from Geoff Andrew, Nick Bradshaw, Chris Darke, Sophie Mayer, Catherine McGahan, Olaf Möller, Nina Power, Ginette Vincendeau and Sergio Wolf.

Editorial: Children of the evolution

The Five Key William Wyler films: the rerelease of Roman Holiday offers an apt occasion to say ciao to one of Hollywood’s most meticulous craftsmen.

Dispatches: the lure of flesh on screen, of sunlit romance and the open road, point to the unexpected affinity between cinema and summer, says Mark Cousins.

Development Tale: Trap for Cinderella, Iain Softley’s adaptation of a French thriller, languished for 12 years after a trio of screenwriters failed to give him what he wanted.

The price of censorship: with unclassified film widely available on the internet, video labels are bridling at the expense of submitting work to the BBFC, reports Michael Brooke.

Cabinet of curiosities: In its second year under new management, the Edinburgh Film Festival has made a virtue of its eclectic programming, says Nick James.

Now you see her: known in the West as an actress, Mania Akbari is also one of Iran’s most distinctive filmmakers, as a forthcoming retrospective reveals. Mar Diestro-Dópido explores her work.

The far country: the 22nd Festival of Finnish Cinema offered the ideal chance to explore the country’s rich legacy of local takes on the western, says Olaf Möller.

Soundings: the Source Family’s soundtrack and audio recordings give the documentary a rawness that cuts through the Age of Aquarius clichés, says Frances Morgan.

Primal screen: the preservation of celluloid is crucial to maintaining film heritage but there are some places only digital can reach, says Céline Ruivo.

Admission
After Earth
The Battle of the Sexes
Blackfish
Black Rock
Blood
Breathe In
The Conjuring
Days of Grace/Diás de gracia
The Deep
Despicable Me 2
Eden
Fire in the Night
Frances Ha
From up on Poppy Hill/Kokurikozaka kara
The Frozen Ground
Girl Most Likely
The Heat
The Internship
Les Invisibles
The Last Exorcism Part II
Man of Steel
Monsters University
The Moo Man
My Father and the Man in Black
Night of Silence
Now You See Me
Paris-Manhattan
Play
The Purge
Trap for Cinderella
Venus and Serena
Viramundo: A Musical Journey with Gilberto Gil/Viramundo: Un voyage musical avec Gilberto Gil
Wadjda
We Steal Secrets: The Story of WikiLeaks
World War Z

The unimaginable imagined: Claude Lanzmann’s essential documentary Shoah is a radical creation that defies being discussed in the same terms as other cinema, says Graham Fuller.

Scripted mid-shoot, the last 30 seconds of Hal Ashby’s 1979 Being There startle the audience into reconsidering its assumptions, says Thirza Wakefield.