Film of the week: Paradise: Hope 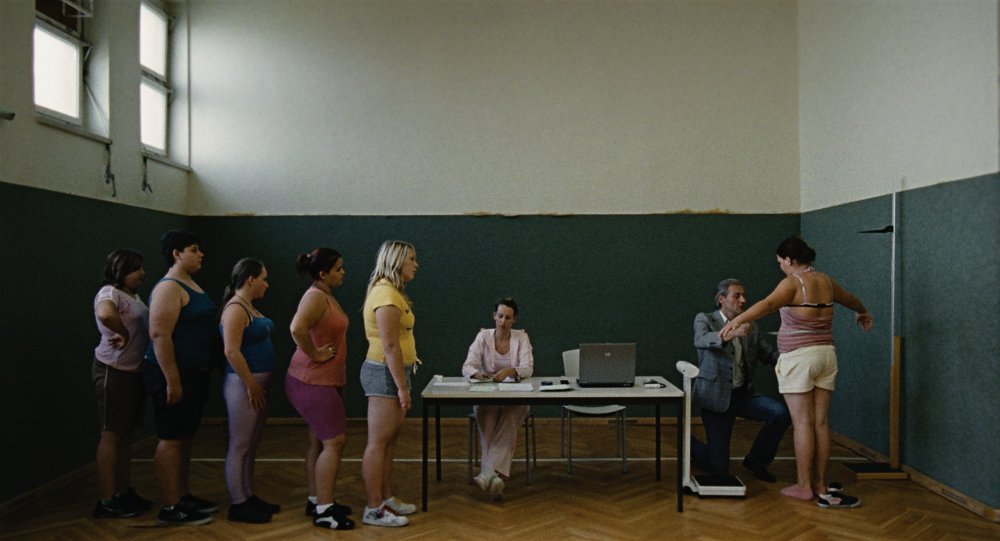 Those who have staggered punch-drunk through the first two parts of Ulrich Seidl’s ironically titled Paradise trilogy (Love and Faith, both 2012), never mind the rest of his confrontational oeuvre (features such as 2001’s Dog Days and 2007’s Import/Export or documentaries like 1996’s Animal Love, the latter attracting the unforgettable Werner Herzog quote “Never have I looked so directly into hell”), might be forgiven for anticipating and/or dreading more of the same with Hope. Certainly many individual scenes confirm this impression, since the camera stares as unflinchingly as ever at people not in full control of their emotions, each shot usually running just that bit longer than seems entirely appropriate. However, the overall effect is surprisingly humane and even warm, despite these not being adjectives one readily associates with Seidl’s work.

Not that the film is exactly a thigh-slapper (barring the scene in which reluctant teenage dieters are cajoled into doing just that while singing – in English – “If you’re happy and you know it, clap your fat!”), but there’s little doubt that much of it is intentionally funny, and in a far less complicated way than Seidl’s grim humour has functioned in the past. Indeed, anyone approaching the film as a Seidl virgin (it works perfectly well as a standalone piece) might well view it as an Austrian cousin to similarly blunt coming-of-age films such as Catherine Breillat’s 36 Fillette (1988) or Lukas Moodysson’s Show Me Love (1998): on the face of it, it seems to have little in common with Love’s Kenyan sex tourism or Faith’s study of religious mania, not least because the protagonists of the earlier films were middle-aged.

But 13-year-old Melanie, or Melli (Melanie Lenz), is the daughter of Love’s Teresa and the niece of Faith’s Anna Maria, and it’s now clear that the narratives of all three films run concurrently over the same summer. In particular, a recurring motif in Love, in which an emotionally bereft Teresa tries and fails to reach Melli on the phone, is counterpointed here by Melli’s own attempts to ring her mother in search of the same kind of emotional support.

Melli, like Teresa, is looking for love, but instead she’s packed off to a ghastly Diätcamp, or ‘diet camp’, in which 16 similarly overweight teenagers are subjected to a strict regimen of physical exertion, approved food and stern lectures about nutrition. Naturally, they subvert this at every opportunity, raiding the well-stocked kitchen for late-night snacks and contriving excuses to get out of particular exercises – hardly surprisingly, since these are led by a fearsome gym instructor twirling an imaginary whip while bellowing “Lift your legs, like a pony, like Lipizzaners!”

As before, Seidl blurs the line between fact and fiction. The credits reveal that all 16 camp inmates were performing under their real names, and Lenz had already experienced the dubious pleasures of an actual Diätcamp prior to being cast. Individual scenes were constructed according to Seidl’s established method of encouraging improvised dialogue around a pre-agreed structure. The scenes in which Melli and Verena, her best friend in the camp, discuss their (limited) sexual experience in graphic detail feel grubbily voyeuristic at times, but also ring horribly true (all performances, especially those by the kids, are pitch-perfect).

Those who have seen Seidl’s earlier films are constantly primed to expect the absolute worst, and he’s clearly toying sadistically with audience expectations when he concocts such scenes as a paralytically drunk Melli dancing in a nightclub under the gaze of plainly predatory men, or her luring the camp doctor (on whom she has a major crush) into the forest during a day out so that they can be alone. 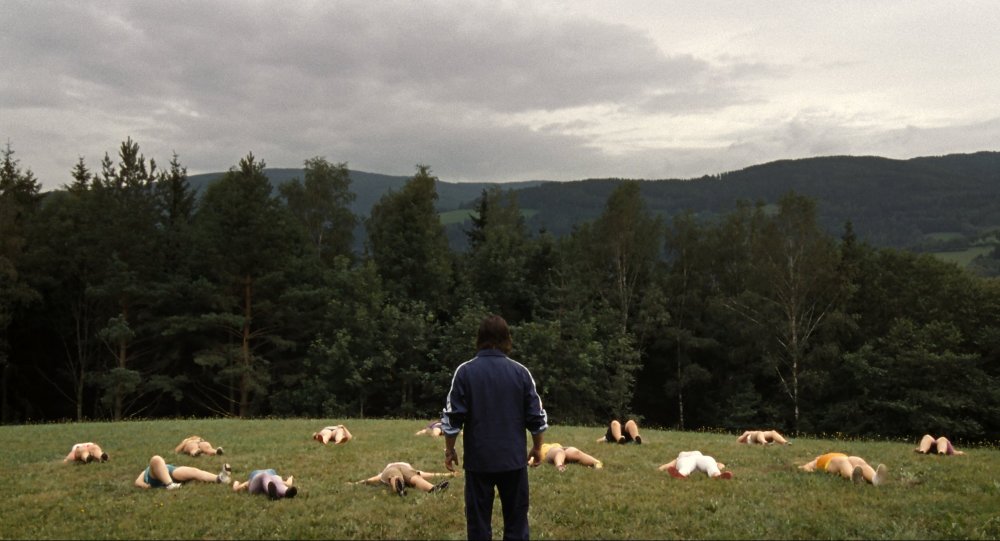 Melli’s relationship with the doctor (who, like all the camp’s authority figures, is never named) forms the film’s major narrative arc. It’s clear there’s attraction on both sides, despite an age gap that must be almost four decades, but the treatment is closer to Jaime de Armiñán’s unfairly neglected (if once Oscar-nominated) The Nest (1980) than Lolita, in that far from being a predatory paedophile/ephebophile, the doctor is all too aware of the massive ethical and moral red line which invisibly runs down the middle of the many symmetrical compositions showing him facing Melli from opposite sides of the frame, each willing the other to make the first move. (There’s also some actual colour symbolism going on in the garishly orange chairs outside his office, creating a powerful ‘hot seat’ effect in an otherwise calculatedly cool lighting schema.)

Melli, like her three immediate roommates (and doubtless a fair number of the others), is the child of divorced parents, a fact established early enough for it to become one of the film’s main underlying themes. It’s partly a classic reversal gag when Melli’s friend Hanni rings each parent to give them precisely opposing accounts of camp life (it certainly triggers one of the bigger laughs), but the fact that she’s more honest with her father speaks volumes.

Melli’s own fruitless attempts at getting through to Teresa in Kenya (she’s only allowed one hour’s phone access a day) retrospectively enrich the recurring motif in Love when Teresa tries in turn to contact her. Both films establish that mother and daughter alike are desperately lonely, to the point of contemplating clearly unsustainable relationships across massive age gaps, though Melli does at least have the excuse of genuine innocence, and Seidl treats her in a remarkably protective fashion given the indignities usually meted out to his protagonists. (Since Lenz was herself only 13, and the other teenagers equally underage in real life, there may well have been legal factors underpinning Seidl’s uncharacteristic restraint.) 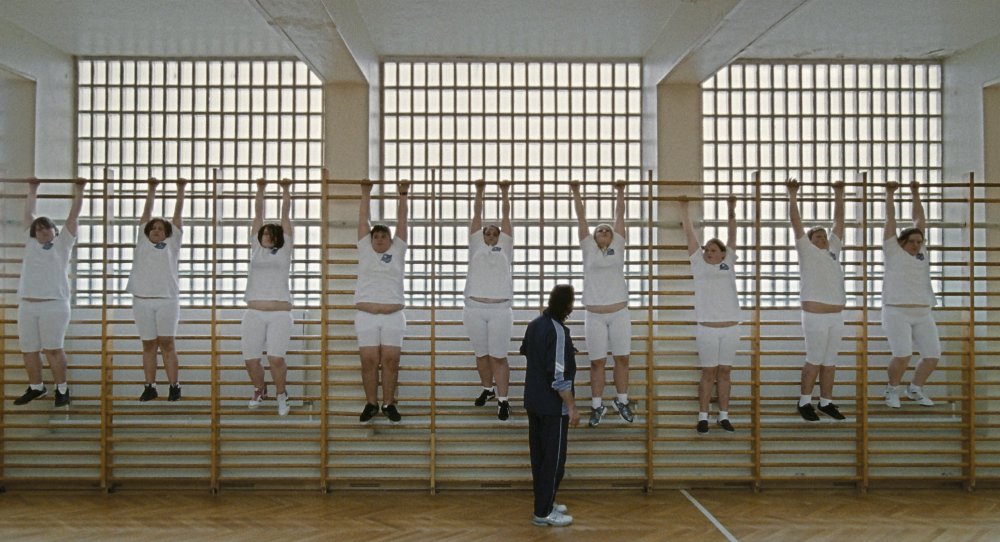 As before, Seidl and his regular cinematographers Ed Lachman and Wolfgang Thaler are constantly alert to the visual possibilities of their primary location, a forbiddingly austere-looking modern building full of glass, bare white walls and gleaming metal furniture. Shooting in the now familiar mixture of fixed-camera tableaux and looser handheld sequences (usually when characters are letting their hair down, often with the aid of alcohol), they were clearly enjoying themselves immensely as they worked out yet another bizarrely Greenaway-esque image of a line or circle of overweight teenagers being forced to run or power-walk past the camera or contort themselves into yet more undignified shapes. There are very occasional echoes of the compositions of the notorious photographs of Guantánamo Bay’s Camp Delta or Iraq’s Abu Ghraib prison, but Seidl doesn’t draw any explicit political parallels.

Any hint of exploitation or ‘fat-shaming’ is counterbalanced by the fact that the teens seem cheerfully relaxed about their present physical state and none of them appears to be making any of the intended progress (Verena reveals that this is far from her first diet-camp sojourn) – possibly because they’re fully aware that the bodily reshaping their parents intend is primarily to enable insertion into social pigeonholes which they themselves might reject.

In other words, everyone involved is expressing hope of some kind, and while it’s clearly impossible for all of them to reach their intended paradise (since several scenarios are directly contradictory), the fact that in some cases it seems genuinely achievable offers perhaps the closest thing to a happy ending in Seidl’s entire oeuvre. Four bruising hours into the Paradise trilogy, who would have expected that?