The pain in Spain: three Spanish films at London 2012

Mar Diestro-Dópido cuts her own Spanish pathway across the festival’s Cult, Experimenta and Dare strands to find a trio of films steeped in loneliness, memories and death. 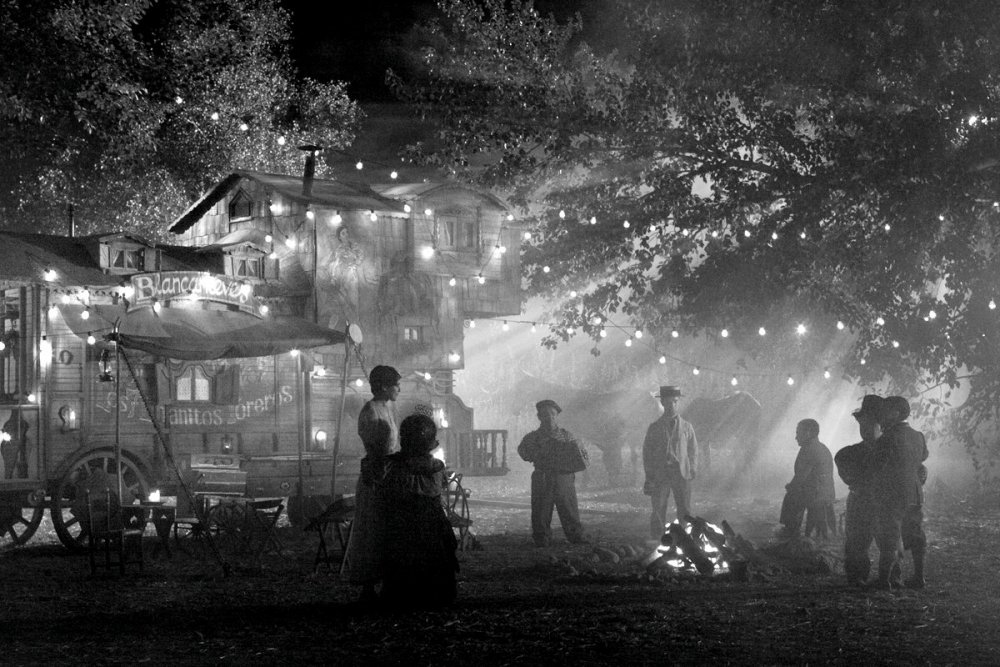 Faced with the maze of 200-plus films that comprises a film festival like London’s, I tend (at least initially) to fall back on those from my Spanish homeland – even if, in a world of international co-productions, the national seems increasingly redundant as a concept.

I mention this because, although much attention has been paid to the LFF’s new film groupings this year – ‘Danger’, ‘Love’, ‘Thrill’ etc – I did end up turning to the festival’s website, where it remains possible to navigate by nationality/geography. After all, these divisions are still valid even in our markedly transnational world, and help us make sense of our surroundings… or so I thought.

Another clear division in many a festival programme, of course, is that between old cinema and new. Notwithstanding its more emotional focus, the LFF still has its ‘Treasures from the Archive’ strand, in which the old becomes the rediscovered. And yet I started this year’s festival journey with Blancanieves (Snow White) – a Spanish film shot in Spain dealing with all things understood as stereotypically Spanish, which appears in the ‘Cult’ strand, yet also happens to be black-and-white and silent.

(The fact that it’s silent may come as less of a surprise in the wake of both The Artist [review] and Miguel Gomes’s masterful Tabu [review]. Pablo Berger’s film isn’t in the same league as the latter, but it does employ silent film grammar in a much more nuanced way than The Artist – and has just been nominated for an Oscar, too.) 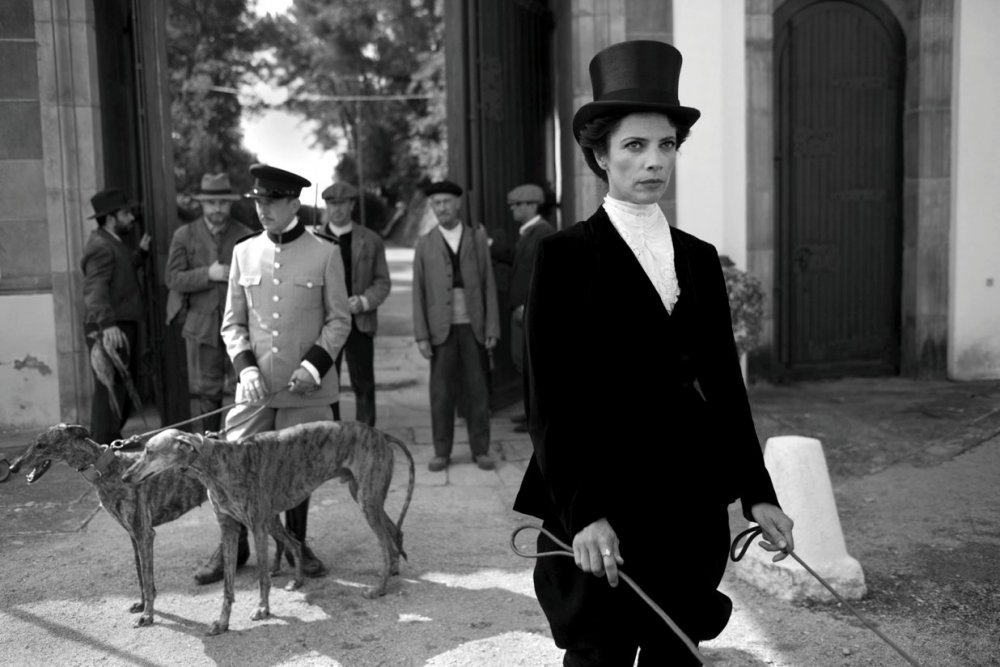 I’ve lost count of the times I’ve been greeted with the words ‘flamenco!’, ‘torero!’ or ‘fiesta!’ whenever I’ve revealed my nationality anywhere in the world outside Spain. Blancanieves half deprecates, half celebrates this – it’s almost as if he’s drawing on the late dictator General Franco’s favourite tourist-friendly maxim, ‘Spain is Different’, to create a bacchanalia of Spanishness. It’s the main ingredient in the story of Carmencita, the daughter of a celebrated matador who’s badly gored by a bull at a corrida, prompting his heavily pregnant flamenco singer/dancer wife to go into premature labour and die after giving birth. Destroyed, he rejects the newborn girl and falls into the alluring arms of his nurse, Encarna, who’ll eventually become Carmencita’s cruel and power-crazed stepmother.

Set in a lusciously gothic reconstruction of 1920s Andalucia, the film mixes Tim Burton-esque elements of the Brothers Grimm’s Snow White with more than a formal nod to German Expressionism – and late-silent European cinema in general. The grotesquerie also brings to mind another Spaniard, Luis Buñuel. When Carmencita is left half-dead and amnesiac after one of her stepmother’s drivers tries to kill her, she’s nicknamed Blancanieves by the circus troupe of six bullfighting dwarves who save her, and whose show consists of mimicking the corridas with a heifer just prior to the real version (notes here of Tod Browning’s Freaks). The cruelty of bullfighting is therefore openly mocked; significantly no bulls are shown being killed in the film.

But Blancanieves is also about family and suffering, and its most beautiful scenes (the still stunning Ángela Molina dancing with her granddaughter, Carmencita, for example) can also be the most horrifying, as they are all permeated by loss. That’s also the main preoccupation of my second LFF film, Jaime Rosales’ mesmerising and, in its own way, unforgettably magical The Dream and the Silence (Sueño y silencio).

The Dream and the Silence

These two films couldn’t be further apart, and I would never have yoked them together (let alone watched them one after the other) if it weren’t for that special ‘alchemy’ that sometimes happens at a festival.

Up till now, the formal daring of Rosales’ past work (also shown at previous LFFs) never quite engaged me. As suggested by its ‘Experimenta’ berth – which could also have accommodated Blancanieves – the titular silence becomes a means of expression; like his previous films, The Dream and the Silence is practically wordless.

In Rosales’ tale of misfortune, shot largely in grainy black and white (as opposed to the spectacular gloss of Blancanieves), the dream becomes a nightmare experienced by a family comprised of two Spanish emigrants (Yolanda from Andalucia and Oriol from Cataluña) who have raised their two daughters in Paris. One fatal day the father is involved in a car accident with the older daughter, and wakes up later unable to remember anything.

From the outset it’s clear that Rosales conceives of cinema as an art – the film opens with the strokes of a paintbrush on a blank canvas. The father’s amnesia and his incapacity to grieve enable Rosales to strip the narrative to a bare minimum; the viewer discovers the story purely through the characters’ emotions, which are stunningly translated into images by Oscar Durán’s cinematography.

As in Blancanieves, the emotional journey of this family is triggered by the clash between holding onto the past (Yolanda) and the impossibility of remembering it (Oriol). As such, both films highlight how much of our pleasure, but also our pain, resides in our memories. The images from The Dream and the Silence that linger the most take place in a park conceived as a magical place. The film’s most unforgettable moment occurs here, when Yolanda recalls the games she used to play with her sister when they were kids, in a scene whose full resonance is only later revealed.

The Dead Man and Being Happy

If, in Blancanieves, Carmencita’s sudden burst of memories saves her from a certain death, and Oriol’s amnesia marks a new start for his family in The Dream and the Silence, then Santos, the professional-killer protagonist of Javier Rebollo’s third film The Dead Man and Being Happy (El muerto y ser feliz), will only be able to finally rest when he remembers the name of his first-ever victim.

And if Berger looks back for inspiration to early European cinema, and Rosales is wedded to film as art, Rebollo – his film filed under ‘Dare’ – crosses the Atlantic to pay homage to all things Latin American, in particular the latest and most distinctive wave of Argentine cinema instigated by Mariano Llinás’ groundbreaking Historias Extraordinarias and the mockumentary Balnearios, which Rebollo filters through the distancing formal strategies of the French New Wave.

Without sentimentality, Rebollo shoots the ghostly former glories of Argentina’s summer resorts, which mirror Santos’ ebbing life. Santos has in fact run away from the hospital in which he was being treated for terminal cancer with a stash of morphine, to embark on a mental and physical journey which he’ll share with a woman he picks up on his way.

The Dead Man and Being Happy

Roaming dangerously between the pretentious and the genuinely risky and poignant, The Dead Man and Being Happy also uses Santos’ plight to speak about cinema. It’s no coincidence that the film is dedicated to the Uruguayan Cinematheque and even includes a cameo by its director, Jorge Jellinek, protagonist of Federico Veiroj’s delightfully offbeat ode to cinema A Useful Life [review].

Taking literally Godard’s dictum that all you need to make a film is a girl and a gun, The Dead Man and Being Happy is built on a myriad of cinematic references, which might at face value seem superficial and meaningless.

And yet, once more, it is precisely a certain formal distance – as in Blancanieves (and to an extent The Dream and the Silence) – which allows Rebollo to present the unsparing details of what are the main subjects of each of these films: loneliness, memories and death.

Put another way: those national boundaries, as much as the largely interchangeable sections (Dare/Cult/Experimenta) in which these films appear, were soon shattered by virtue of references to a much wider cinematic memory – references which are, of course, simply an alibi to express and understand emotions.

This in turn mirrored my own festival journey through the new, the old, the national, as all these elements ended up constituting something far more personal. By the time I turned back to the catalogue with my next carefully calibrated searching manoeuvre, the motto of this years LFF jumped off the page and hit me right in the face: Feel it.

Next: The same cloth: Edith Head and Alfred Hitchcock →

Related to The pain in Spain: three Spanish films at London 2012