War for the Planet of the Apes review: a highly evolved CGI-enhanced epic

With great leaps in motion-capture technology, and a brilliant cast including Andy Serkis and Woody Harrelson, the latest instalment in this sprawling franchise is a rich and satisfying film.

The current iteration of the franchise, which derives from a novel by Pierre Boulle (whose credit has somehow gone astray), repeatedly nods to the earlier Apes saga – though seldom to Tim Burton’s 2001 remake. Long-term ape-followers will pick up details such as the alpha-omega branding of the human villain’s army (taken from the markings on the casing of the nuclear bomb worshipped by mutants in Ted Post’s Beneath the Planet of the Apes, 1969) and the reinvention of mute human heroine Nova (once a bikini babe, now an orphan waif), complete with an exact match of Charlton Heston’s line reading (“No-vah!”).

A genetically engineered virus has replaced the nuclear-war angle, and – so far – the time-twisting, snake-swallowing-itself element of the 1970s sequels hasn’t been drawn on, but this extended saga is surprisingly all of a piece. Not only does War end up in a location that matches the crash site of Heston’s spaceship in 1968, but it bookends the mix of pulp adventure and Swiftian satire by investing Andy Serkis’s Caesar with more epic overtones than even such an ingenious blend of acting and CGI effects can manage. As Woody Harrelson’s mad human commander forces slave apes to build a useless wall, there’s more than a touch of the cartoonish ‘contemporary relevance’ that Rod Serling and Paul Dehn brought to their Apes scripts with anti-war protester chimpanzees and militarist gorillas. 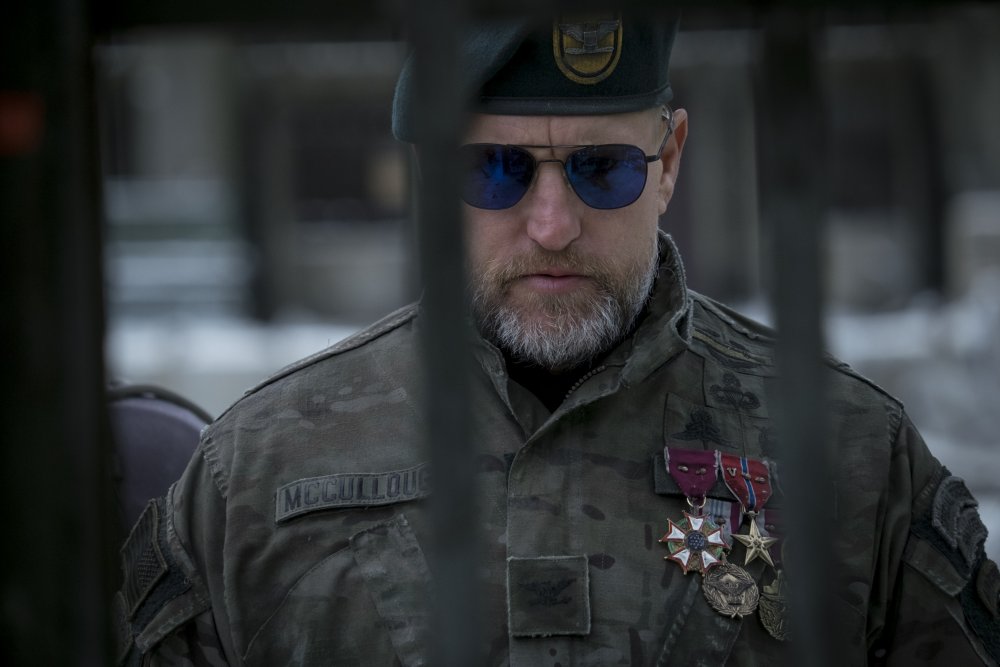 Here, Caesar is required to be Geronimo, Henry V, El Cid, Mr Christian, Spartacus and Moses, as much in the suffering as the heroism. He’s bereaved, crucified and flogged as often as the likes of Burt Lancaster, Kirk Douglas or indeed Charlton Heston were at the height of their widescreen messianic masochism. He is even haunted by the ghost of Koba (Toby Kebbell), the rival who started the war with humans in Dawn of the Planet of the Apes, and fears he is becoming a monster too. If he weren’t acting with dots on his face to be replaced by a detailed computer simulation of an upright chimpanzee, it would be all but impossible to deny Serkis an Academy Award nomination for Best Actor.

The human villains come from a later film tradition: Harrelson’s mad Colonel McCullough is a ringer for Brando’s Kurtz (someone has scrawled “Ape-pocalypse Now” on a wall), and Vietnam movies are evoked by helmet slogans such ‘Bedtime for Bonzo’ and (following Kong: Skull Island) the pun of labelling an ape enemy with a homonym for ‘Cong’ (the generic human name for the ape enemy is Kong). Boulle’s other contribution to cinema was the source novel for David Lean’s The Bridge on the River Kwai (1958), and the Lean-like impulse to be epic almost overwhelms a finale which, as in Kwai, combines the horrors of war (humans wipe each other out – though it’s not definitively confirmed that the white-clad soldiers who attack Harrelson’s outpost are human) and grand-scale destruction (delivered by an avalanche tree-climbing apes are better-prepared to survive).

Like epics of old, this risks stretching too far in piling on the plagues of Egypt – the ultimate fate of its hero, keeling over just as a promised land is sighted, would be more affecting if it didn’t follow such an exhausting parade of larger-scale catastrophes.

A rich, complicated entry in a franchise that has always been willing to strain for significance, this takes full advantage of CGI character-creating technology, which is evolving more rapidly than its sapient apes. Watching all three of the recent Apes films in succession, the progress of motion-capture performance in a relatively short time is as astonishing as the leap in sound recording between The Jazz Singer (1927) and King Kong (1933).

Serkis has been an acclaimed master of projecting through pixels since his precedent-setting turn as Gollum in the Lord of the Rings films, but here he is surrounded by equally impressive performances. Steve Zahn provides nervous comedy relief as Bad Ape, a zoo chimp in a parka and bobble hat who is timid but tenacious and near-mad from achieving intelligence in isolation. Karin Konoval’s orang-utan Maurice (named after Maurice Evans, Dr Zaius in the first Apes films) has grown from Rise to Dawn, and emerges here as Caesar’s conscience and credibly the last hope for post-human humane attitudes, played mostly in mime with especial conviction in tender, sad interactions with the voiceless Nova.

Related to War for the Planet of the Apes review: a highly evolved CGI-enhanced epic