The Souvenir review: Joanna Hogg pulls the threads of a doomed romance 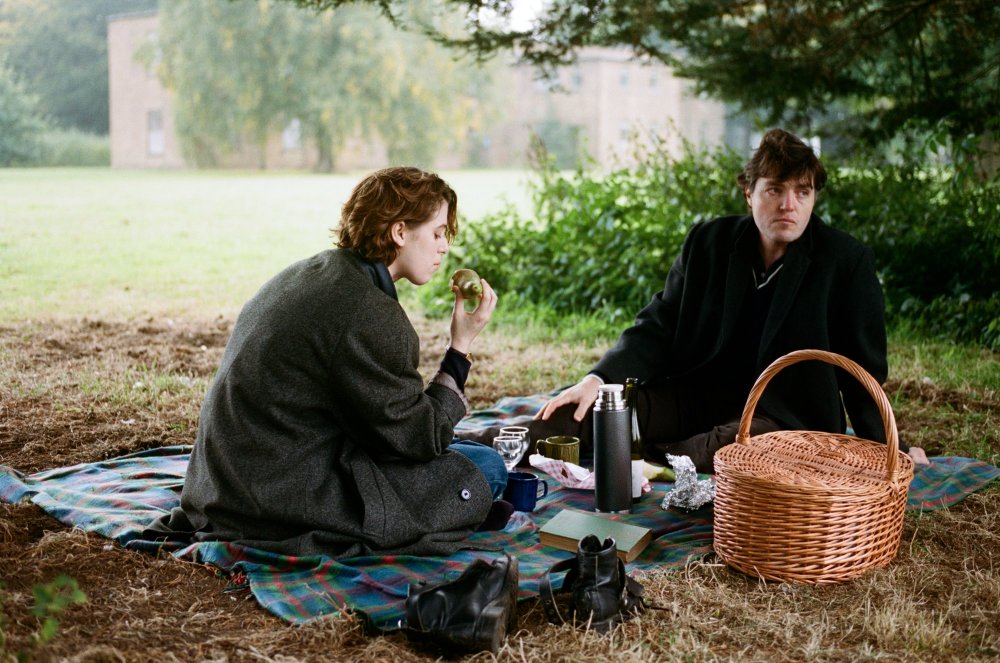 Early on in this delicate, acute story of artistic self-discovery and amour fou, shy film student Julie is introduced to Fragonard’s ‘sensibilité’ painting The Souvenir, in which a besotted young woman carves her lover’s name into a tree. Exquisite and enigmatic (Julie and her new lover Anthony can’t agree if she looks sad or determined), the painted Julie – she’s Rousseau’s love-tossed heroine – will resonate as we watch the young filmmaker Julie’s own obsessive love.

Life and art are similarly melded throughout Joanna Hogg’s gorgeously melancholy tale, a lightly fictionalised portrayal of the director’s own youthful sentimental education in 1980s London, which mixes a doomed affair’s sharp pains and pleasures to stunning effect. A memoir film, it unwinds Julie’s fascination with the arrogant, cultured Anthony (a louche, laconic, chainsmoking Tom Burke) in painterly vignettes created with the desaturated colours and gauzy good looks of a heritage drama. Within these potent pockets of memory, Anthony’s charm and casual cruelty bind Julie into years of compulsive co-dependence.

Set in a faithful recreation of Hogg’s former Knightsbridge flat, it’s studded with the director’s own student work, her vintage furniture and even her long-time friends, with spot-on Sloane Ranger Tilda Swinton touchingly good as a tender, Englishly reserved mama, to her real-life daughter Honor Swinton Byrne’s fledgling director Julie. While several of Hogg’s films have explored themes that are deeply significant for her, such as childlessness in Unrelated (2007) and the middle-aged creativity of Exhibition (2013), this one feels extraordinarily personal.

Nonetheless, Hogg has made it an experiential film, one less concerned with fidelity to her history than with exploring the slippery line between Anthony’s coercion and Julie’s emotional complicity. Neither a ‘bad boyfriend’ confession, nor a #MeToo story of girlhood grooming like The Tale (2018), Julie’s narrative is as much one of artistic growth as of emotional exploitation. Anthony, at first sight an upper-class Foreign Office fop in pinstripe suit, hat and rolled umbrella, dressed as if for a Cambridge Five-themed costume party, is a catalyst rather than a villain. Despite the Hitchcock hints in his presentation – a whiff of Vertigo in his assiduous makeover of Julie, a Notorious-style cruelty in his manner and insistent shaping of her tastes and lifestyle (he’s a fan of Powell and Pressburger’s films, grand hotel lunches and starlet-sexy 1950s underwear) – he intrigues and excites her. Under his deft manipulations (“Stop inviting me to torture you,” he murmurs wearily), Burke flashes slivers of a resigned sadness, feeding a secret that will eventually unravel them both.

The couple’s improvised dialogue has a convincing spontaneity (Hogg works from a novella-like summary rather than a script), which switches between flirtatious teasing, cutting opinions and Anthony’s measured putdowns – “You’re lost, and you’ll always be lost.” He’s a fascinating character, but in this portrait of the artist as a young woman, his complexity is never allowed to overwhelm the heroine’s own growing pains. The film is concentrated on his effect on Julie, whose own creative ambitions are eroded as their affair becomes an intense dramatic bubble built for two. 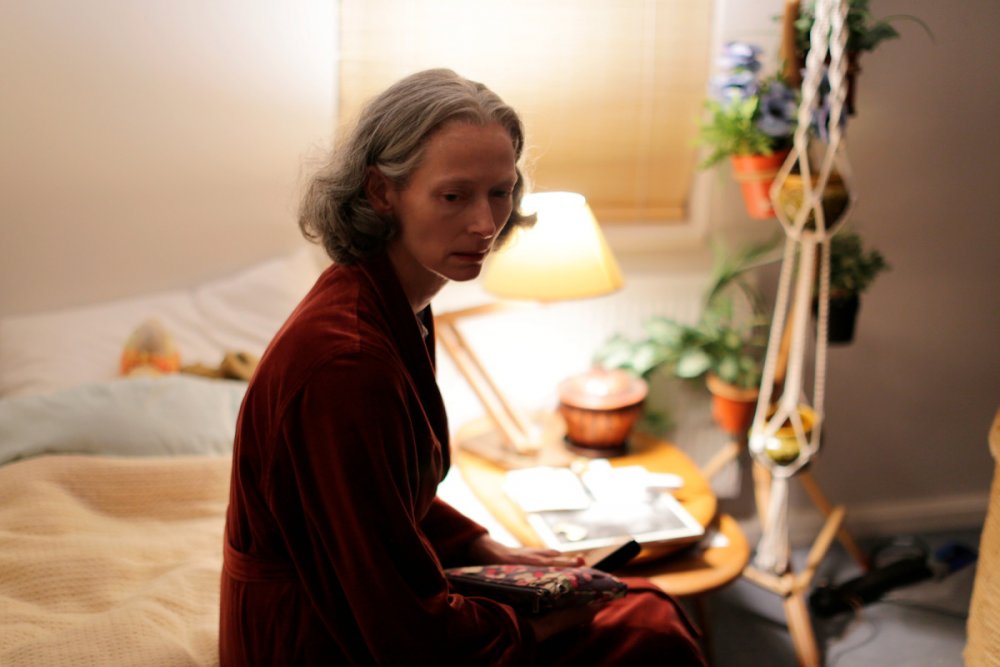 As Julie and Anthony are swept up by their volatile passions, the affair itself becomes a creative production for her, a whirl of expensive outings funded by reluctant parental loans, requiring monogrammed luggage and cinematic costumes (a Hitchcockian grey fitted suit, an oyster-silk opera gown whose train slithers through a misty, misery-laced Venice trip). Though to begin with she is determined to use art to break out of her privileged life, Julie’s heartfelt film-school pitch for a social-realist drama about Thatcher-crushed Sunderland wilts and dies under Anthony’s doubts and her own distractedness.

Unusually, Hogg addresses class and class politics overtly in this narrative, rather than the sideways-glance satire she turned on the haute bourgeois dinner-table angst of Archipelago (2010). Julie, an eager, well-bred innocent among mockney strivers, is ridiculed by a lecturer for her Knightsbridge wealth, while Anthony’s poshness is revealed to be a carapace concealing his arty, lower-middle-class origins.

Stiff with upper-middle-class signifiers (accents, decor, spaniels, even a giggly exchange about purposely using the wrong fork), the film is a sharp-eyed recreation of the posh-redux of the early 1980s, when The Official Sloane Ranger Handbook and TV’s Brideshead Revisited rebooted upper-class certainties. Tilda Swinton’s kindly Rosalind, stumping around in wellies and headscarves and swerving a lunchtime row about the IRA with an imploring “It’s tair-ibly complicated,” is the personification of the era’s stiff upper lip and unchecked privilege. Yet even in this bubble, the violent eruptions of the 1980s are seeping in from outside, via the flat-shaking sound of the 1983 Harrods bombing nearby, or news coverage of the 1984 Libyan embassy siege that Anthony dubiously claims to be involved with.

But the film’s energies are directed firmly inside Julie’s flat, the rooftop-ringed pied-à-terre holding this chamber piece. Hogg’s films have always made fascinating use of architectural space, for example in Unrelated’s olds-vs-teens lavish Tuscan holiday rental or Exhibition’s shiny postmodern house framing a flailing artist. This time, the small flat is mutable, sliding from workspace and refuge to love nest and prison, as Stéphane Collonge’s subtle production design shifts from student film clutter to Anthony’s imposition of his young-fogey taste in candelabra and artwork. 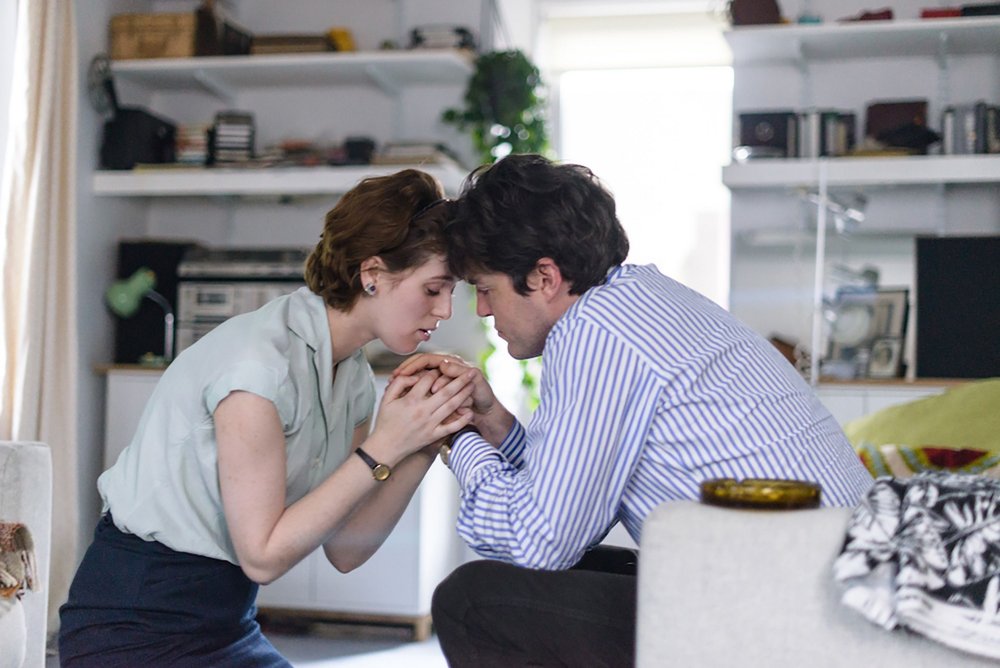 As the pair’s odd-couple romance deepens, Hogg breaks her usual no-music rule to fold in songs that nimbly underscore their changing status. Joe Jackson’s Is She Really Going Out with Him? points up their unlikely coupling, rudely questioned later by Richard Ayoade’s troublemaking dinner guest, who says, “I’m trying to work out where you two tessellate here.” Anthony’s favourite opera, Bluebeard’s Castle, a tale of innocence abused, fills the flat with subliminal tension.

Beyond this, The Souvenir’s cool, classical visual style is a masterclass in using the big screen to portray intimacy. Though less austere than Archipelago’s static framing or Exhibition’s reflections and dream sequences, DP David Raedeker’s beautifully still wide shots let your eyes roam, picking up the layers of detail and body language that deepen with each scene. What does Anthony’s blue Christ’s Hospital School coat signify, you wonder? Is it sentimental, or just stolen? Does Julie always employ a stills camera or super 8 to shield her from her own party guests? And in a nod back to the painted Julie, Julie reads fragments of Anthony’s intense, contrite love letters aloud, hanging hungrily on each word while the camera steadily contemplates a row of trees.

Hogg’s sparing use of close-ups gives them exceptional force when they are deployed, as when Swinton Byrne smiles in dazed, glassily polite shock on discovering Anthony’s ongoing deception during that uneasy dinner party. A first-time actor, her naturalistic performance feels realistically hesitant, sweetly awkward and utterly fresh.

Despite Julie’s innocence, frayed by Anthony’s increasingly self-destructive behaviour, Swinton Byrne’s thin-skinned portrayal emphasises that she’s often a co-conspirator in their crazy love, rather than a fragile victim. When she discovers Anthony has stolen her film equipment and sold it on, she can’t bring herself to finish with or even reproach him, simply too giddy with expectation about their Venice trip. Clinging on to a filmmaking course that she’s sleepwalking through, while anxiety about Anthony consumes her, Swinton Byrne beautifully illuminates Julie’s slow, stubborn progress towards a creative awakening that will enable her to channel her pain and her lived experience into art that’s genuinely her own. Her performance is the crowning glory of this lush and piercing work, Hogg’s finest to date, a piece that carries out Anthony’s most thoughtful film edict with considerable artistry and grace: “We want to see life not as it is lived, but as it’s experienced within this soft machine.”

Related to The Souvenir review: Joanna Hogg pulls the threads of a doomed romance