A Quiet Place review: a masterly evocation of silent terror

John Krasinski’s meticulously crafted horror film is both a devastating allegory and a genuinely terrifying succession of jump-scares.

from our forthcoming June 2018 issue 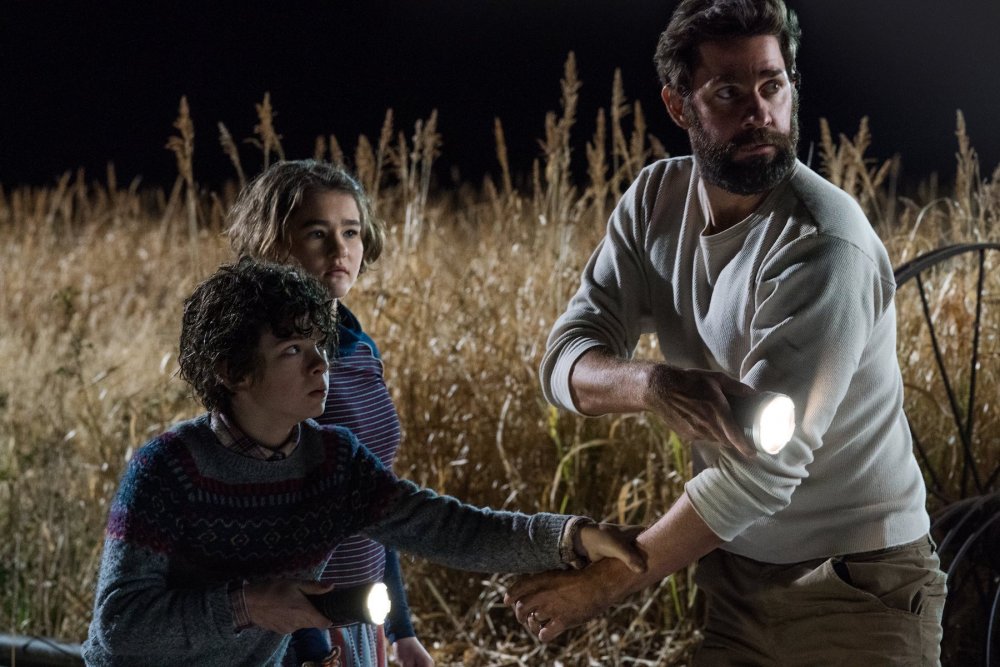 Noah Jupe as Marcus Abbott, Millicent Simmonds as Regan and director John Krasinski as Lee in A Quiet Place

In several respects, John Krasinski’s outstanding third feature calls to mind Jordan Peele’s 2017 horror Get Out. Despite the very different material, both films display narrative perspicacity and masterly craftsmanship. And where Peele used genre conceits to eloquently explore issues of racial inequality, Krasinski and his fellow screenwriters Bryan Woods and Scott Beck serve up a genuinely frightening film that also plays as a devastatingly effective allegory about protection, paranoia and power.

At the outset, onscreen text tells us that it’s ‘Day 89’; of what is unclear, though an abandoned town and ransacked supermarket indicate catastrophe. A family of five creep barefoot around the store – which is virtually empty save for, tellingly, the still fully stocked crisps aisle – communicating only through sign language. Their skill in this is explained by deaf daughter Regan (Millicent Simmonds), who wears a bone-anchored hearing aid through which she can hear nothing but her own heartbeat.

After they fill their bags with essential provisions, the youngest boy – no more than four – delightedly shows them his find: a toy space shuttle. The manner in which his father, named only in the credits as Lee (Krasinski), tentatively takes the toy and removes the batteries resembles nothing so much as bomb disposal; for good reason, it will soon transpire. Seeing the boy’s disappointment, Regan hands him the toy; no one witnesses him retrieve the discarded batteries. As they walk through the forest, the inevitable happens and electronic beeps echo in the silence. The horror registers on the faces of Lee and wife Evelyn (Emily Blunt) a split second before something races through the trees and kills the boy where he stands.

This breathless opening reveals Krasinski’s sophisticated filmmaking approach, setting up the premise and showcasing the meticulous attention to detail that will turn his lean story into a masterclass of tension. While it is mostly devoid of dialogue, it is a film rich in subtle textural detail. From the sand-strewn paths on which the family carefully tread to their simple white-light/red-light warning system, the visual tapestry of their everyday life is a constant reminder of how they cope with their predicament.

After the initial trauma, the film jumps forward just over a year – to ‘Day 472’, to be precise. The four surviving family members are eking out a low-key existence, Lee spending much of his time in a room full of CCTV feeds and observational notes, desperate to understand the threat, as the kids play Monopoly with felt pieces. As Evelyn hangs a handmade mobile, the sight of her full-term bump brings not joy, but the appalling realisation of what a baby means; a ticking time bomb of noise, with no batteries to remove. They are, however, prepared: their basement is soundproofed, the thick wooden crib has a lid, and there is a baby-sized mask to go with the oxygen canisters lined up against the wall. 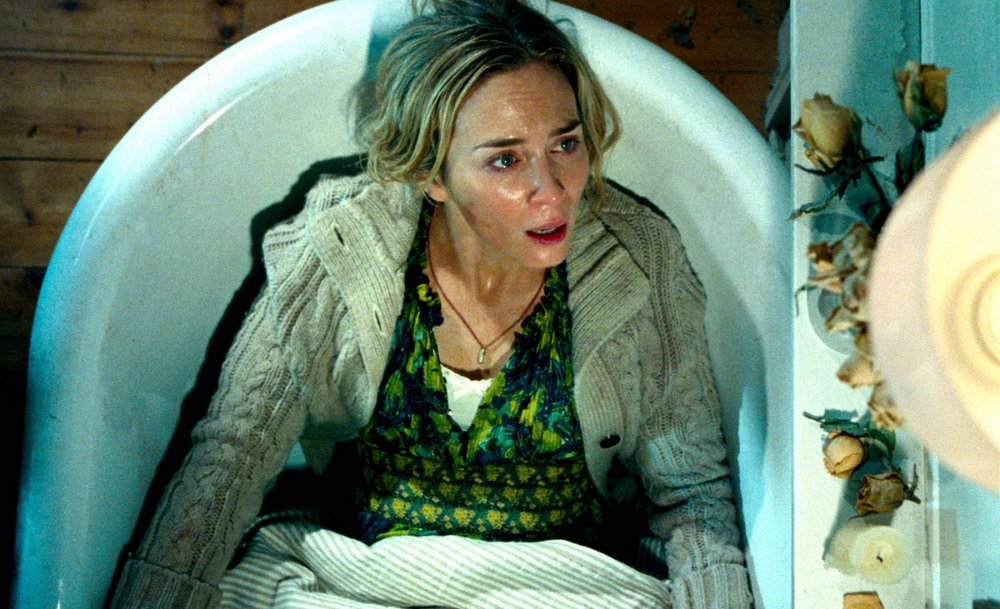 And yet, despite all this careful planning, events conspire to a fever-pitch assault of violence. Evelyn goes into labour early, alone, while Lee and son Marcus (Noah Jupe) are out fishing and Regan has stormed off after an argument with her father (the trials of adolescence caring not that the world is ending). While mother and baby survive, and Marcus and Regan manage to fight off an attack – helped, unbeknown to them, by static from Regan’s hearing aid, which sends the creature screaming in agony – Lee is forced to make the ultimate sacrifice in order to save his kids.

Therein lies the power of A Quiet Place: despite its well-played jump scares, it operates at a deep emotional level. Aside from the fleeting appearance of an ill-fated elderly couple, there are no other human characters on screen; this apocalyptic tale is told entirely through the prism of a single family, one struggling to cope not only with actual monsters, but also with insidious personal demons of grief, blame and guilt.

Much as in Trey Edward Shults’s recent It Comes at Night, the desire to maintain an element of familial normality is at sharp, disorientating and often heartbreaking odds with the new reality. “There’s nothing to be afraid of,” insists Lee to his son, echoing the stock reassurances of parents everywhere. “Yes there is!” comes the terrified youngster’s incredulous, entirely accurate response. 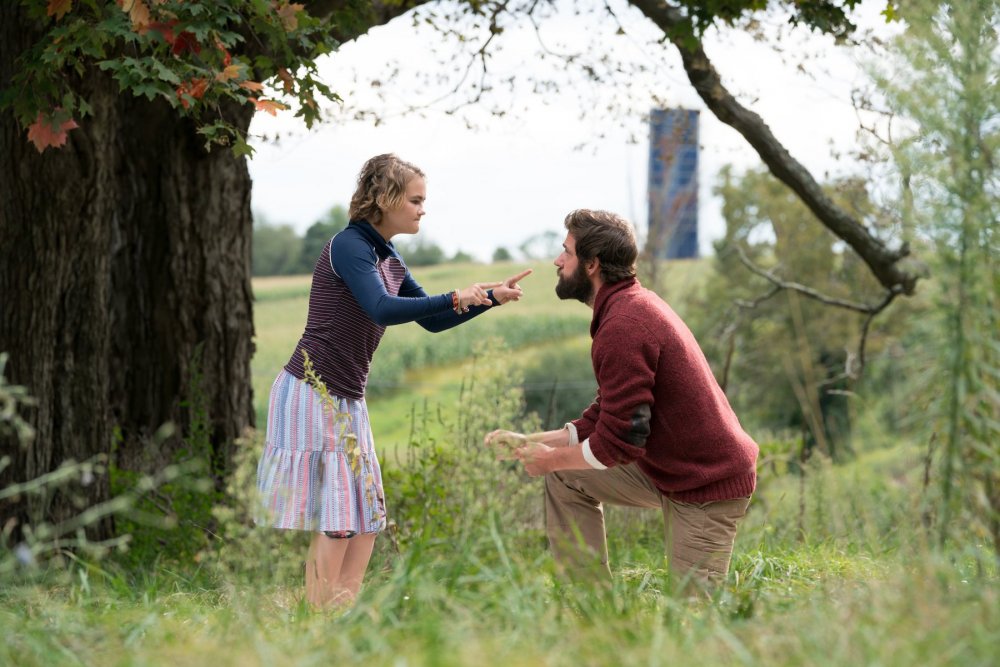 This uneasy tension is augmented both by excellent, stripped-back performances and by pitch-perfect filmmaking. As the family attempt to bury themselves away from the dangers lurking in the gorgeous New York state scenery, Charlotte Bruus Christensen’s cinematography is by turns lush and dank, expansive and claustrophobic. Surprisingly, perhaps, for a film that puts so much stock in silence, the sound design is utterly immersive. Extended periods of quiet are broken by powerful punches of noise; the creatures’ clicking and Regan’s whirring hearing aid have their own peculiar, prescient harmony.

Indeed, the film’s seat-edge climax belongs to Regan, and her realisation that she may hold the key to finally besting the creatures. In that cacophonous moment, the message becomes one not of silent sanctuary but of noisy empowerment; a realisation that survival may not, in fact, come from avoiding the assault, but in finding the courage to rail loudly against it.

Related to A Quiet Place review: a masterly evocation of silent terror