Sandra Bullock leads her crack burglar squad in a high-society, low-hurdle heist caper in which togetherness is a matter of sharing the spoils.

from our forthcoming August 2018 issue 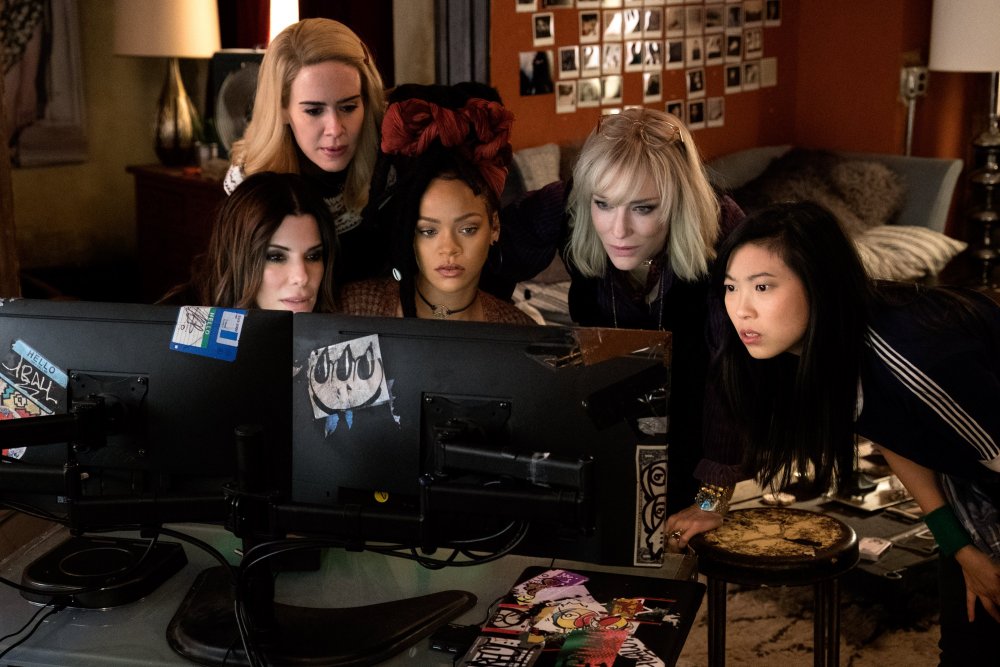 Best intentions and a carefully curated selection of slay kweens notwithstanding, orthodoxy was always on the cards for this all-female reboot of a franchise that was a remake of a vehicle for the Rat Pack. From this degraded copy of a copy of a copy emerges Debbie Ocean (Sandra Bullock), Danny Ocean’s newly paroled sister, who marches out of a maximum-security Nevada prison in an evening gown and stilettos. (If you recognise that this is a lady version of the opening of 2001’s Ocean’s Eleven, you just might be savvy enough to be bored by everything that follows it.) After pulling a few high-end grifts in Manhattan to settle in, Debbie follows the Netflix formula of success and assembles a team of unconventional (but hot) female characters to pull off a quirky caper she’s spent the past five years fantasising about in solitary: stealing the Toussaint, a custom-made, six-pound Cartier diamond necklace, from an unsuspecting actress at the Met Gala.

Sadly, ‘Cartier’ and ‘Met Gala’ end up being the most fully fleshed-out details in Ocean’s Eight, which is more akin to an advertisement for these elite brands than the grrrl-powered lark it sometimes tries to be. In a bit of wheedling that feels extremely metatextual, deadbeat fashion designer Rose Weil (Helena Bonham Carter) coos to a pair of elite jewellery handlers, “There’s a whole generation who don’t know who Cartier is.” Naturally, they loan the Toussaint to Weil so that she can dress star Daphne Kluger (Anne Hathaway) for the Gala.

The crooks themselves remain thinly drawn (the eighth member’s motivations for joining are nonsensical) and, save for Debbie, have very little to do, because technology does it for them. Nine Ball (Rihanna, who happened to be a co-chair of this year’s Met Gala) is such a skilled hacker she can make glasses that scan objects and instantly recreate them with a 3D printer; after Facebook-stalking a guy and phishing him with a fake Wheaten Terrier fansite, she hacks into the Met’s security cameras and creates a blind spot – negating the need to do anything cool with wires. (The overreliance on 3D printing will almost certainly age as well as James Bond’s combination-safe-cracking device and photocopier in On Her Majesty’s Secret Service.)

So while the film passes the Bechdel test with flying colours, insurance investigator John Frazier (James Corden), who appears in the last 20 minutes of the film to piece together Debbie’s elaborate scheme, has more lines than crew pickpocket Constance (Awkwafina) or jeweller Amita (Mindy Kaling). The women’s specialisation is so great that it negates the need for most of them to work together, except during the big heist. It’s a robbery that’s emblematic of the age of co-working spaces and independent contractors.

Though many of the thieves in the previous iterations of the Ocean’s films were aloof (or inscrutable, as in the case of ‘The Amazing’ Yen, who gets a cameo), their isolation doesn’t allow much chemistry to flourish or make their coolness cohere. The script by director Gary Ross and Olivia Milch often plays it a little too safe when it comes to humour, relying on readymade lady-mag jokes about green juice, Tinder and stress-eating Nutella. Whereas Danny Ocean felt superior to the casinos he was conning and Basher Tarr was a ludicrous but crucial component of his crew, Debbie and her associates want to be a part of the Met Gala simply because it’s the Met Gala, and each of them gets a walk down the red carpet as they smuggle out the Toussaint. They seem to buy into the conventional and expected, which is perhaps a more realistic depiction of scammers and swindlers but definitely a more boring one.