The blurred lines of work and life, of bourgeois culture and ethics, play out through the entanglements of Guillaume Canet and Juliette Binoche’s literary couple in this verbose but many-layered parable. 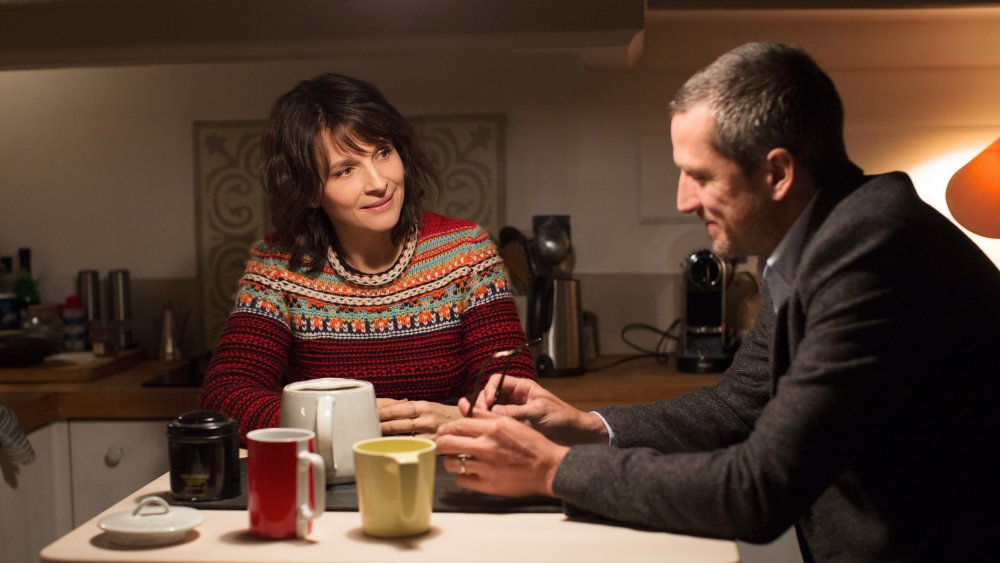 The double plotline, braiding heterosexual romance with a second narrative intrigue, usually pertaining to work, is a cornerstone of classical Hollywood. It marries private and public life, staging their happy union in a single climax, resolving all problems in the nick of time. Olivier Assayas might seem an unlikely candidate to resuscitate this construction today, but Non-Fiction – tellingly titled Doubles vies in the original French – does exactly that, moving between a garrulous account of the crisis of literary publishing in the digital age and the adulterous lives of members of the creative class.

Rather than any lazy lapse into formula, though, this return to classical structure – a return that is at the same time a radical revision – echoes the film’s main thematic preoccupation: namely, how the old must change and adapt if it is to keep pace with the new. Holding persistence in one hand and mutation in the other, Assayas remakes the double plotline for an age when work and life are indistinguishable, monogamy is a fiction and algorithms determine culture.

Non-Fiction’s work plot is set primarily within the world of literature. The central character, Alain (Guillaume Canet), is an editor at a venerable publishing house; with the help of the younger Laure (Christa Théret), the head of digital transition, with whom he is having an affair, he attempts to tame the beast of technological change.

This narrative strand is not only the domain of writing, but of speech too: the film is full of long discussions in which every opinion you have ever heard about the impact of digitisation on cultural production is mooted. The internet will save literature, the internet will kill literature; it is a democratising utopia, it is an anarchic incubator of post-truth politics; blogs are the future, blogs are worthless; the critic is dead, the critic is reborn as a Twitter aphorist. I could go on.

Although the film is mostly unconcerned with taking sides on these issues, references to the philosopher Theodor Adorno, the novelist Thomas Bernhard and the poet and critic Stéphane Mallarmé are sprinkled throughout, firmly situating its characters as individuals of class privilege, for whom a notion of Bildung – self-cultivation – remains fundamental, whether it is to be pursued through print or Kindle. Watching these voluble characters lay out their respective opinions about the internet is amusing, and will surely figure as a curious time-capsule for viewers in years to come, though the rehearsal of so many well-worn talking points also risks becoming tiresome. If these people are so cultivated, so intelligent, why have I heard it all before? In the hands of another director, this might be an ironic commentary on the banality of bourgeois pontification, but Assayas plays it straight and sincere.

Contrary to all the talky talk about e-books and tablets, Non-Fiction’s other plot – pertaining not to work, but to life, and specifically the life of the straight bourgeois couple – is a story of the unsaid. Alain is not the only one to stray: his partner Selena (Juliette Binoche) has been sleeping with one of his authors, Léonard (Vincent Macaigne), for six years. Whether Alain knows about this remains unclear; what is clear is that if he knows, and he might, it is never discussed outright. Complete candour rarely arrives, and when it does, as in a conversation between Léonard and his partner Valérie (Nora Hamzawi), it is deemed unnecessary, undesirable.

Unlike the vociferous pronouncements about the fate awaiting literature when profit is king and life lived online, the amorous entanglements of Non-Fiction are filled with non-disclosure, marked by a reticence that strikingly inverts the work plot’s loquaciousness. Taken together, the film’s two narrative strands point to how different private communication is from public pronouncement, redeeming somewhat the occasionally tedious discourse on the future of the book by making it more than just zeitgeisty palaver.

Non-Fiction refreshingly avoids any moralising about its characters’ mostly hidden infidelities, seeing these as an inevitable part of long-term partnerships – and even as something that allows those partnerships to function. Joan Didion famously wrote, “We tell ourselves stories in order to live.” Assayas proposes that, actually, equally, we tell our loved ones stories in order to live. Alain and Selena seem to have a happy enough relationship, even though many of their interactions are pregnant with subtext, full of instances when what is said is not quite what is meant.

In these scenes, and perhaps most potently in the concluding conversation between Léonard and Valérie, Assayas suggests it may be wrong to assume that intimacy is best served by complete honesty, that it is mistaken to expect that we will always be most forthcoming with those who are closest to us. Just as the art of literature must go to bed with commerce to live another day, so too does the survival of the film’s romantic partnerships depend on polluting a cherished ideal. When reality knocks, this sex comedy sees pragmatism as the best response.

Assayas’s most dramatic twist on the double plotline occurs in the introduction of a third narrative preoccupation that, from the start, collapses any distinction between work and love, art and life. This is found in Non-Fiction’s treatment of autofiction, a form of fictionalised autobiography in which the line between true and false can be near impossible to draw.

Here, Assayas has his finger on the pulse of contemporary trends in literature: while autofiction has had an established presence in France since the 1970s, in recent years it has become an international phenomenon, with the success of writers such as Rachel Cusk, Karl Ove Knausgård, Ben Lerner and Edouard Louis. It is a form in which the ‘I’ meets the word and the world, where experience becomes story, perfect for the age of social networks, in which personal authenticity is the greatest commodity of all. If the film’s discourse on e-publishing provides one set of answers as to what happens to literature in the age of the internet, the popularity of autofiction offers another.

Léonard’s new book rides this wave, relating events of his private life – including his affair with Selena. Some details have been changed: her name is different, and a blowjob in a cinema happens during Michael Haneke’s The White Ribbon (2009) instead of Star Wars: The Force Awakens (2015), a fib that enables Léonard to cast himself as both more discerning and more scandalous. Like the intimate partnerships of Non-Fiction, in Léonard’s autofiction, self-expression is never unreservedly confessional. Truth bends to the exigencies of the speaker. Several times, Léonard is asked to confront the ethics of his chosen form, and particularly the delicate matter of how he serves up his real-life relationships for public consumption. He shrugs off such concerns: reality may be his currency, but fiction is his alibi.

True to the original French title’s invocation of doubling, Non-Fiction is replete with mirroring. Notably, though, its engagement with autofiction never doubles back on Assayas’s own relationship to his film. If the director has a proxy, it is not Léonard, the somewhat pitiful merchant of real life, but the sanguine Alain, who collects the opinions of those around him and cites Ingmar Bergman, a director for whom Assayas has great admiration. When Laure asks him if he knows the Prince of Salina’s words from the end of The Leopard, he does: “Everything must change for things to stay as they are.” In Non-Fiction, it is true of cinema, literature, relationships.

This attitude could be rejected as a desperate conservatism. But aren’t there things we want to keep? Non-Fiction feels breezy, but this is a film in which, on multiple fronts, appearances don’t tell the whole story. Beneath its apparent lightness is something much thornier: a parable of integrity, compromise and betrayal.