Mouthpiece first look: puzzling the pieces of a mother’s legacy

Patricia Rozema opens out Norah Sadava and Amy Nostbakken’s stage play of a woman’s interrogation of her relationship with her self-abnegating late mother, with the two actor-writers playing the lead role in tandem. 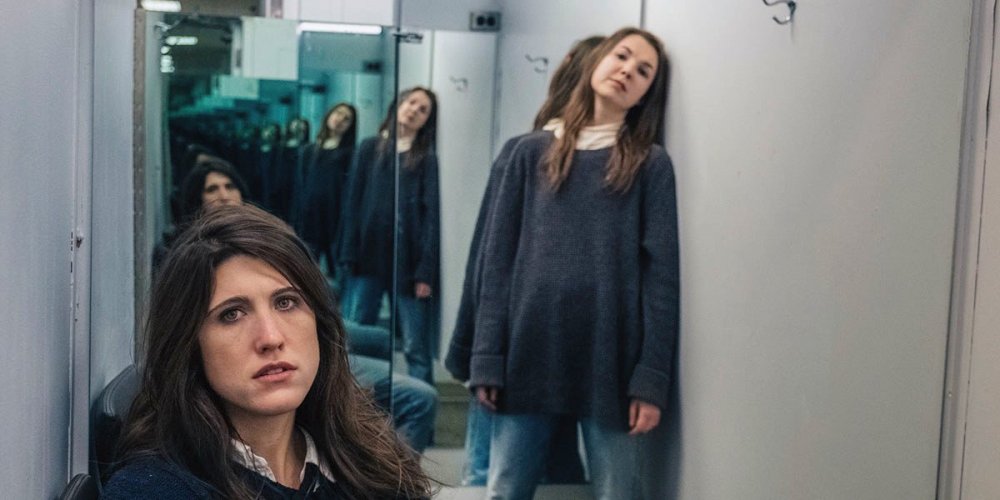 Amy Nostbakken (left) and Norah Sadava as Cassandra in Mouthpiece

Cassandra, a 30-year-old writer, wakes up hungover one morning to hear her mother Elaine’s voice on her cellphone. As she hunched over her kitchen table, suffering a stroke, Elaine left her daughter a succession of increasingly slurred voicemails. In one of the more effective uses of a mobile phone in cinema, as Cassandra listens, she discovers that her mother died alone during the night, while she was passed out drunk, oblivious to the calls.

The twist in Patricia Rozema’s fiery, blackly comic and terribly poignant new film Mouthpiece is that the part of Cassandra is taken by two actresses at once. Norah Sadava and Amy Nostbakken, the writers and performers of the play, also called Mouthpiece, that inspired the film, share the role, multiplying and dividing it. Sadava is petite and pixie-faced, Nostbakken tall and rangy.

The two women speak sometimes in harmony, sometimes in dialogue; they lurch forward together on a wobbly bicycle, clamber into bed or trip over their scarves in unison, but also switch roles and positions, in conversation, in bed. At the film’s tearful climax they engage in a bloody brawl. Cassandra is not a set of twins or binary opposites, but an awkwardly, unevenly fractured self, like the many images of Cassandra and her mother (Maev Beaty) shot pointedly through bevelled glass by cinematographer Catherine Lutes.

The film considerably widens the visual scope of the play, the staging of which consisted of the two Cassandras in a bathtub, wearing white swimsuits. Here the dual Cassandra traipses around recognisable locations in a wintry Toronto, doing errands and preparing to, at her own insistence and to her family’s horror, write and deliver the eulogy. Elaine appears in wispy flashbacks: a devoted mother, an avid reader and intelligent writer-editor, who paused her career to raise a family and could never quite start it again.

One of several difficulties facing Cassandra is not just how to describe her mother, but how to value the life of a woman who transferred her own aspirations to her daughter: a wasted life, or a noble sacrifice? Cassandra recalls her mother’s failed attempt to return to work, but the shot from this incident with the most impact is from Elaine’s perspective, as she drops her notebook into a meal her children refuse to eat.

The Cassandra role is partly a dance routine of sorts, and there is liberal use of music throughout the film. Most successfully, there are intimately recorded throaty vocals by Nostbakken and Sadava that literalise the film’s concern with women finding and using their voice. There are also a couple of pastiche musical numbers that are a little too literal to earn their keep here.

While the script’s cleverness and wordplay betray its stage origins, it’s bracingly sharp, and explicitly a feminist text. Cassandra’s musings on her and her mother’s lives reach out into the patriarchal forces that confine them, from misogynist humour (the Cassandras scrub a pub toilet of sexist graffiti in a cathartic frenzy) to body-consciousness. Mother and daughter have varying but equally unhealthy reasons not to eat French fries; a lingerie saleswoman sings the praises of control-top tights.

Rozema’s achievement is to keep the two Cassandras, and a few dramatic revelations, constantly in flux. The result is a film that brandishes the messiness of self-doubt and self-contradiction, but uses that morass of emotions to unearth something very pertinent about the lives women live, and the lives they leave behind. Everything here, as loose as it appears, is meticulously controlled, down to the splash that notebook makes as it disappears into a tureen of soup.

Related to Mouthpiece first look: puzzling the pieces of a mother’s legacy