A new cut-up of pioneering movie naturalist F. Percy Smith’s Secrets of Nature series, directed by the Tindersticks’ Stuart Staples and scored by the band, is a richly steamy experience. 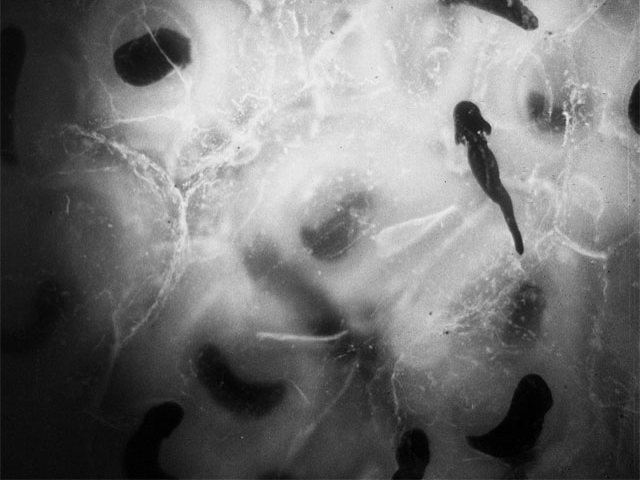 Tadpoles burst forth in F. Percy Smith’s He Would a Wooing Go (1936)

“Life is a tragedy when seen in close-up,” said Charlie Chaplin, “but a comedy in long-shot.” Under the extreme scrutiny of the microscope, in the archival concoction Minute Bodies: the Intimate World of F. Percy Smith, the functions of life are rendered with almost obscene frankness.

Tindersticks presents Minute Bodies: The Intimate World of F. Percy Smith with a live score on 17 June 2017 at the Barbican, London.

Minute Bodies, directed by Stuart Staples of the Tindersticks, is a tribute to the pioneering science films of F Percy Smith, setting images from Smith’s work to a sympathetic musical score to create a new and hypnotical silent movie. Smith’s movies, all shot at his home in north London (the opening card calls him a “dabbler”), captured plants and animals, but used magnification, timelapse photography and a little inventive showmanship to reveal their essential processes: photosynthesis, pollination, reproduction, growth, decay. Their mission to illuminate the unseen is summarised in the title of his long-running series for British Instructional Films, Secrets of Nature. Smith’s aim, he said, was to offer the audience education in disguise: “the powder of instruction in the jam of entertainment”. The footage in Minute Bodies, some of which has not been previously identified, comes from both his silent and sound work, but it is all presented without captions or narrative. Barring a few model shots, animated diagrams and tweezer dissections, then, there is scant powder in this jam.

Minute Bodies is all the more delicious for that, being a sticky montage of monochrome imagery: the buds and stems and cells and eggs of the natural world, suspended in silence against the blackness of the film frame. Sprouting seeds bud delicately furred roots in the darkness of the soil; a flower with quivering petals opens to reveal its veined heart; the globular tips of slime fungus glisten in the gloom, with pin-point reflections on their sleek surfaces creating alien eyes. Elsewhere vines wind around nearby branches, a tadpole bursts from its jelly shell and cells divide and multiply, pulsing in unison like an infinite chorus line. 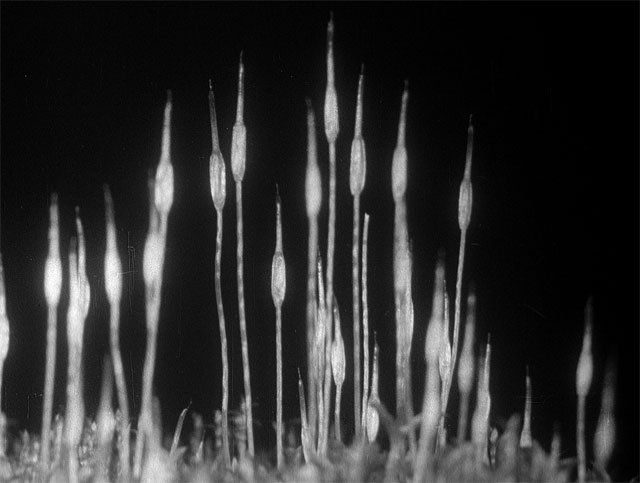 The score, by the Tindersticks with guest composer Christine Ott, emphasises the musicality of these movements, filtering in forceful percussion before a microscopic ballet, and insinuating a sultry brass line as a creeper slinks around an upright stem: an erotic dance of survival. The thickly textured music is a mixture of the celestial and the carnal – following the twin paths of a plant’s growth – up towards the sun, and down into the earth. The score can be unsettlingly animalistic at times, replete with whinnies and growls, but capable of whimsy too, as when a frog skids across the surface of a pond and the music echoes the rumble of a motorboat.

As, in ethereal black-and white, translucent microbes reveal their secrets, catkins explode in a cascade of spores, pods are engorged with beans, yeast balloons and flowers stretch towards the moving sun, hidden life continues with unexpected vigour and passion. It is impossible to fight the feeling that all the undulations, insertions and eruptions are decidedly sexual. That’s appropriate enough, even if many of the specimens in this film are self-seeding vegetable matter, as these complex images are all cuttings from the epic story of the propagation of species.

Rather than cleaving to Smith’s pedagogical intentions, this film reinvents its source material, emphasising the beauty of his work and its experimental allure. Minute Bodies, with its insistent sexual rhythm, is about the urgency of life on a cellular scale. While it may not help anyone pass their science exams, it is ideally scaled to seep under the audience’s skins and into their veins.

Correction (18 October 2016): an earlier draft of this text credited the score solely to the Tindersticks.