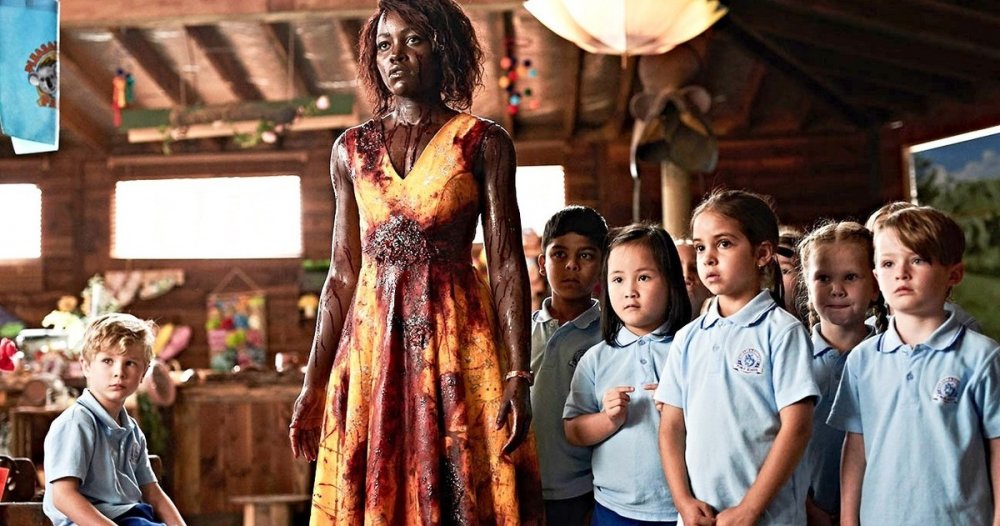 The opening credits and long first act of Australian writer-director Abe Forsythe’s Little Monsters seem to promise something along the lines of a Judd Apatow or Paul Feig gross-out romcom. A montage of unending arguments in public places reveals the sorry state of protagonist Dave’s aimless man-child life, with Alexander England playing this scruffy loser as if he were the title character of something called Bad Uncle. Dave encourages his five-year-old nephew Felix to play violent first-person shooter games, doesn’t believe the boy’s food allergies are real and masturbates over a picture of his primary school teacher (a squirm-inducing longer-shot punchline reveals this to be a class portrait that includes all her smiling charges).

The music choices and discussions of same – Dave tries to pretend that his broken-up death-metal group God’s Sledgehammer is a Christian band, and the leads later reveal shameful enthusiasms for Neil Diamond and Hanson – and colour palette suggest that this is an Australian take on the all-too-familiar tale of an irresponsible bloke who reforms for the sake of an impossibly understanding, idealised woman and has to live up to the expectations (and demands) of innocent children.

Which it is… even after the initial plot is engulfed by another familiar contemporary film form. When a sinister US military experimental base located next to a petting zoo/mini-golf course spawns a zombie virus outbreak, the comedy turns splattery (the fence between cannibal ghouls and happy tourists being hilariously minimal), channelling early, funny Peter Jackson (Braindead) and Edgar Wright (Shaun of the Dead). As winning teacher Miss Caroline, Lupita Nyong’o wears a vivid yellow dress to match her character’s bright personality – in later stages, it’s splattered with equally vivid red bloodstains and she shows a human side that only makes her more appealing.

At this stage in her career, Nyong’o probably doesn’t need to go to Australia to make a zombie comedy – but Little Monsters may be the first film in which she’s visibly having a good time throughout, whether strumming Taylor Swift covers on a ukulele or working hard to persuade her wide-eyed but credibly wayward class that the zombie siege is part of a harmless game.

Forsythe finds room for gory gags (a zombie in a koala costume, an attack by a frog hand-puppet) and set-piece speeches (Josh Gad’s ghastly Nickelodeon presenter whining about his days studying acting under Pacino and his sexual misbehaviour with hordes of mums) but keeps the whole thing under control with tight plotting. All the scattershot set-up stuff pays off. Felix’s wholly believable childish craze for tractors turns out to be a huge help when the class have to escape plodding zombies on a slow-moving tractor train that only he knows how to operate.

Many characters die in the margins, and there’s inevitable George Romero-style cynicism about US military involvement in zombie incidents. “Is this the good news room?” a general asks before telling worried parents their children are saved, implying that there’s a much larger ‘bad news room’ nearby. As the children tug the grown-ups this way and that all through the crisis (a running joke has one kid demanding to play “putt-putt golf”), the tone is so genial that we’re never in doubt that the people we care about will be in the good news room.

The trick of a zombie gross-out comedy – and there are enough of them now to constitute a lively subphylum – is to balance extreme splatter, suspense and broad-strokes satire with a sweet nature and whimsy to take the edge off potential misanthropy. It’s not an easy mix, but Little Monsters joins such recent offbeat entries as Anna and the Apocalypse and One Cut of the Dead in working like a charm.