Film of the week: Lean on Pete, an intimate teenage oater

In the hands of 45 Years director Andrew Haigh, Willy Vlautin’s story of a boy and a horse reversing the Oregon trail on a self-rescue mission has big vistas and better interior drama. 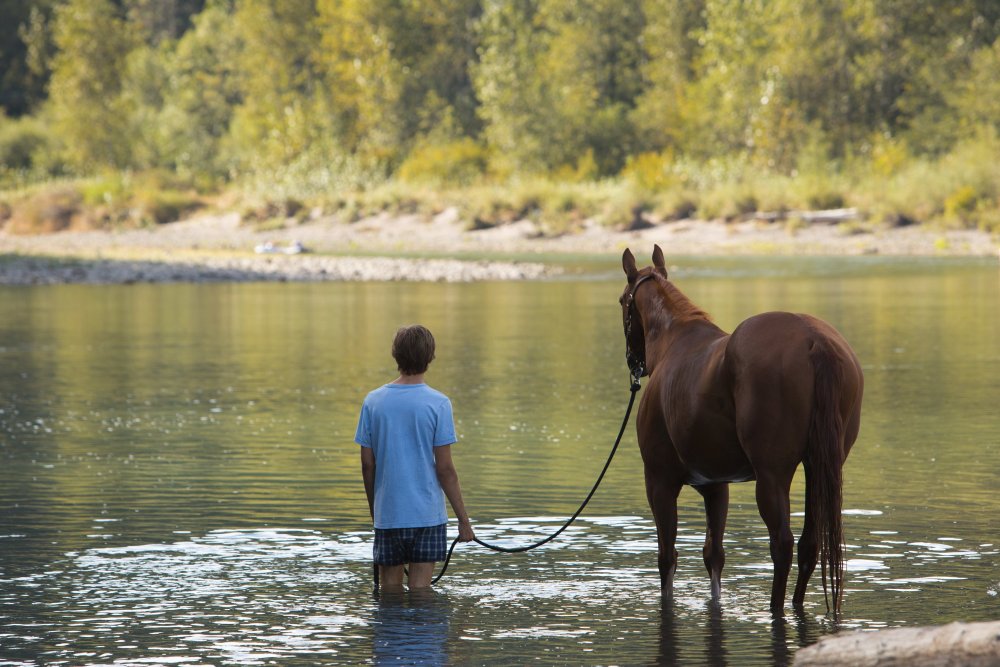 Charlie Plummer as Charley Thompson in Lean on Pete

With Lean on Pete, his fourth feature, British director Andrew Haigh makes his transatlantic big-screen debut – though he has already established his credentials Stateside as exec producer, co-director and co-writer of the HBO series Looking (2014-15), centring around three gay guys living in San Francisco (in some quarters pigeonholed as the gay cousin of Lena Dunham’s Girls). In this, as in his three UK features to date, Haigh showed a knack for low-key observational studies of relationships where glances count for as much as words, and where what’s not said often conveys as much as what is. In 45 Years (2015), a long-married couple (Charlotte Rampling and Tom Courtenay) discover cracks in their marriage dating back decades and throwing its future into doubt; but nobody shouts or turns histrionic. And the two gay guys in Weekend (2011) who hook up for what they expect to be a transient one- or two-night stand, only to find it developing despite themselves into something deeper, explore their emotional complexities in scenes all the more effective for being understated.

Both these – and Haigh’s feature debut, the semi-documentary Greek Pete (2009), about a London rent boy – are essentially circumscribed domestic dramas. Lean on Pete allows him to widen his horizons – literally so, as we get no lack of long-shot vistas of the American Far West, perhaps a few too many. (Like a lot of expats, Haigh seems entranced by the sheer vastness of the US.) But here again the central relationship remains quiet and intimate, though it’s not between two guys or a hetero couple, but between a teenage boy and a horse.

Both, when they set out on their cross-country trek, are damaged. The racehorse, the titular Lean on Pete, has developed a weakness in his back legs that makes him worthless to his owner Del (Steve Buscemi at his most cantankerous). “Del runs his horses into the ground,” jockey Bonnie (Chloë Sevigny) tells Charley, and he knows that the animal will be sent to Mexico as horsemeat. For his part, Charley has seen his dad Ray (Travis Fimmel), his relationship with his son affectionate if cheerfully casual, savagely attacked in their home by a jealous husband. Ray dies in hospital – and it’s soon after this that Charley and Pete take off on their odyssey with Del’s purloined truck. 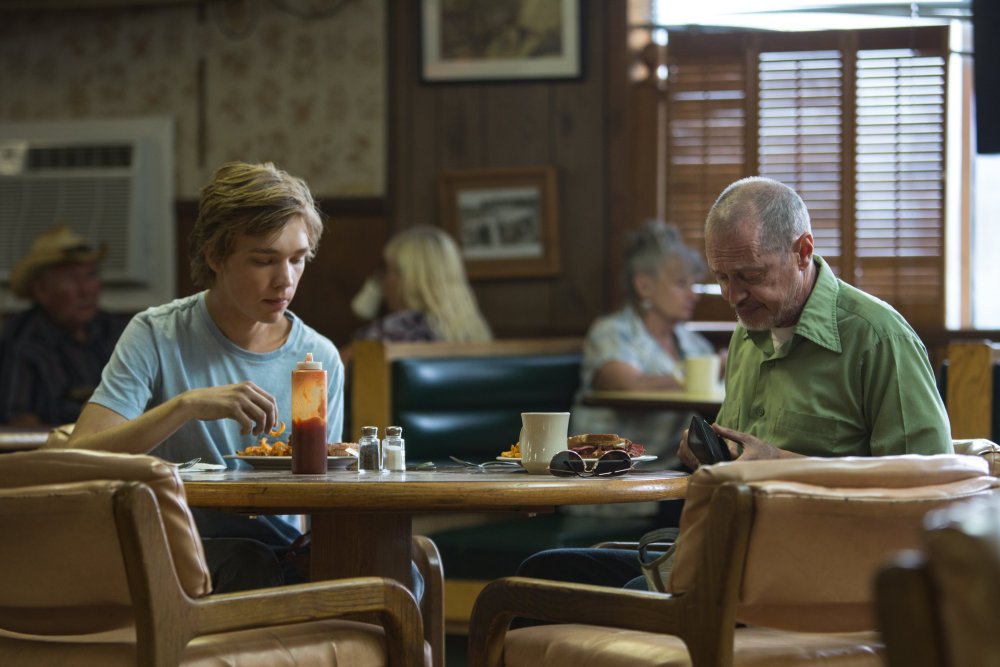 When the truck breaks down, the pair continue on foot, their journey taking them eastward across Oregon and Idaho into Wyoming, where Charley hopes to find his aunt Margy. Their scenes together as they walk are the film’s most gently intimate, Charley telling Pete about his childhood friends and memories, while at night they’re serenaded by distant cows and coyotes as they settle down under the stars; the sense of loss when Pete is hit by a car on the highway and dies, with Charley standing horror-struck over him, is intense. As Charley, the gangling Charlie Plummer (on screen virtually throughout) gives an appealingly vulnerable performance, his open gaze gradually darkening as he encounters cruelty and violence – and finally pushed into furious retaliation by Steve Zahn’s down-and-out Silver, who turns vicious when drunk.

The plotting (Haigh’s script is adapted from Willy Vlautin’s 2010 novel) occasionally feels lazy: on several occasions when Charley hits trouble, a cop or doctor will tell him “Just wait right there,” then obligingly turn his back while the lad hightails it into the night. But elsewhere the predictable narrative clichés are avoided. 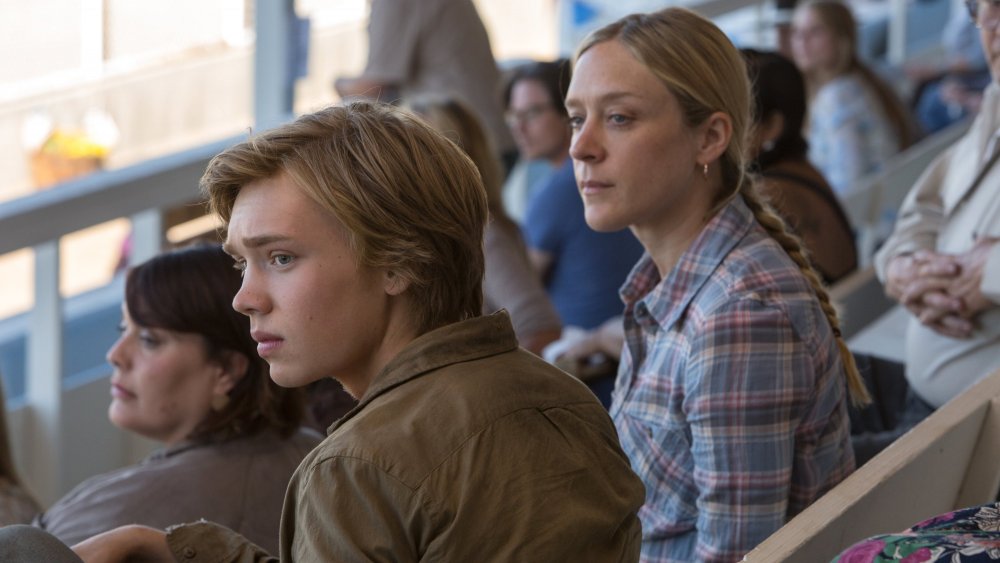 Plummer with Chloë Sevigny as Bonnie

It looks at first as if Lynn, the friendly young woman Ray brings home for the night and who happily cooks breakfast for both father and son, will become the mother-figure that Charley is evidently lacking, or failing her, Bonnie; but it doesn’t happen in either case. It’s not until he finally tracks down Ray’s sister in Laramie that the youngster can collapse into a motherly embrace and open up emotionally, succumbing to grief – for Pete, it seems, as much as for his dad.

The film ends as it began, with Charley out for an early-morning run, though in a different town. The sense of closure is satisfyingly earned. For all its sometimes over-episodic structure – a sequence where Charley encounters two disaffected Iraq vets could have been omitted without much loss – Haigh has crafted a quietly affecting coming-of-age journey tale sustained by a central performance that never feels forced or contrived. And as a bittersweet, felt study in human-animal relations, comparison with Kelly Reichardt’s Wendy and Lucy (2008) doesn’t seem out of place. 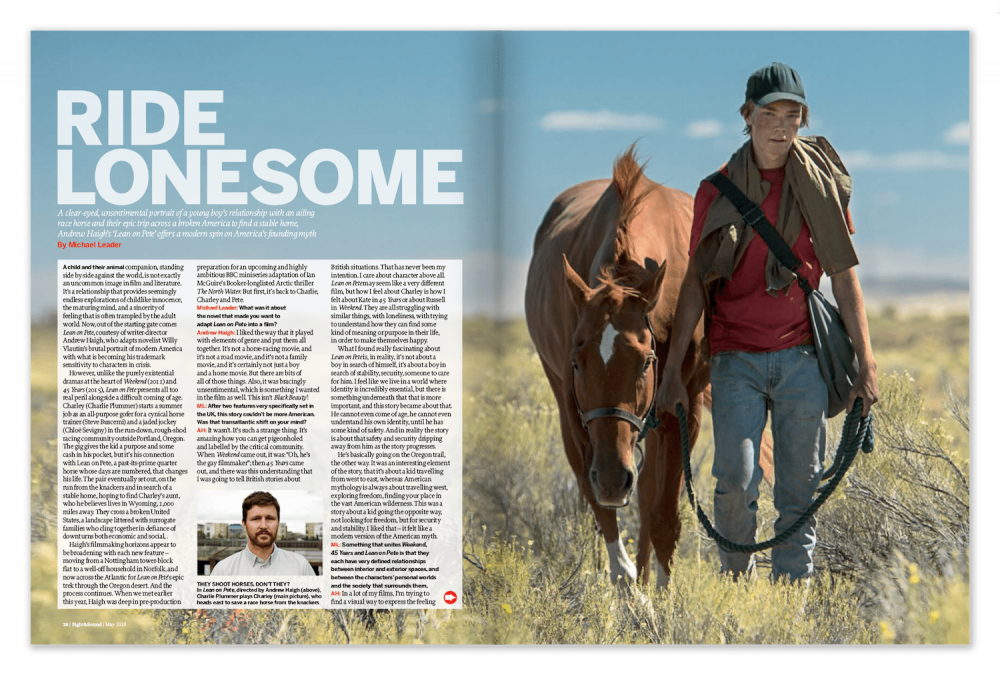 A clear-eyed, unsentimental portrait of a young boy’s relationship with an ailing race horse and their epic trip across a broken America to find a stable home, Andrew Haigh’s Lean on Pete offers a modern spin on America’s founding myth. By Michael Leader.

Related to Film of the week: Lean on Pete, an intimate teenage oater