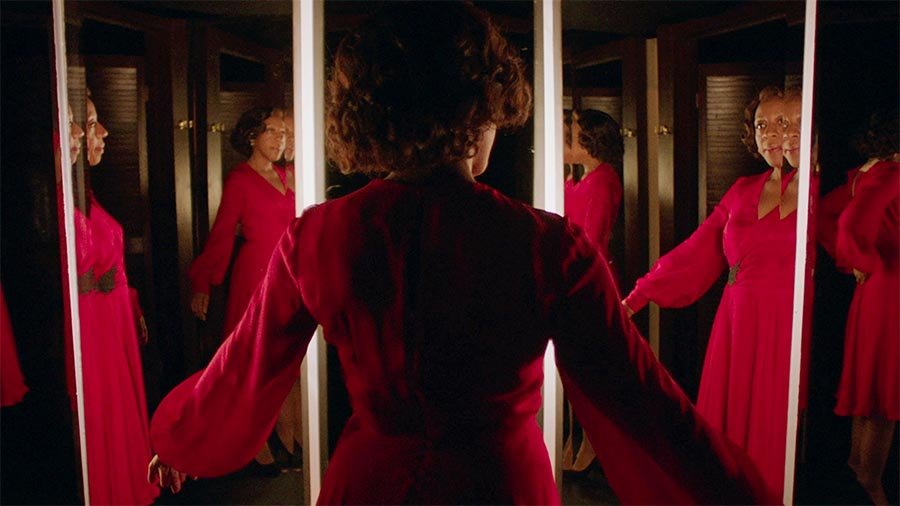 Marianne Jean-Baptiste as Sheila in In Fabric

Every single image on screen in In Fabric, the latest offering from genre director Peter Strickland, is stylised within an inch of its life. Such stylisation may test some viewers’ patience, but there’s a level of brazen confidence here that’s to be applauded. The plot concerns a haunted dress and its disturbing effects as it passes among wearers. The idea is delightful in its simple potency, and the garment itself is gorgeous to behold – its deep red colour and draped silhouette are undeniably sensual.

Like Strickland’s last film, The Duke of Burgundy, In Fabric exists in a universe that recalls the 1970s but ultimately feels out of time. Both films are simultaneously lush and arid. Strickland’s mise en scène is one of fetishistic detail, and some of the most striking passages of In Fabric involve mannequins and vaginal imagery. The department store from which the ghostly dress originates becomes comical in its commitment to aesthetic weirdness. The devious saleswomen dress like Victorian mourners and speak in a lugubrious style pitched somewhere between a philosophical textbook and an early 90s Calvin Klein perfume ad. A critique of consumerism is right under the surface of the department store. Wanting to buy our way into a better-looking life is an urge so powerful it can kill.

The power of the red dress is primal and In Fabric’s biggest flaw is the way in which it wields this power. The film has an undeniable streak of cruelty. We see Sheila (Marianne Jean-Baptiste), the first onscreen victim of the dress, go through hell. She’s a perfectly nice single mother of a grown, ungrateful son. She works a boring job at a bank, and buys the dress to wear on a date (arranged via a totally analogue service, natch). She is, in other words, a woman just trying to do her best, yet the camera seems to revel in her misfortune, and the blood she sheds. Sheila’s existence is ultimately made less important than the sinister power of the dress. Anyone who wears it is made into a pawn in Strickland’s stylised game. 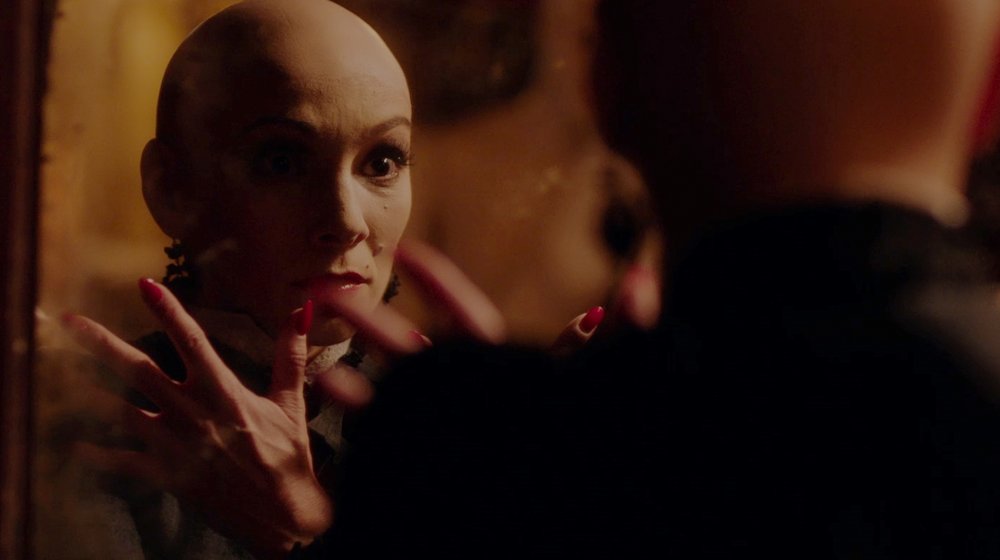 Fatma Mohamed in In Fabric

In Fabric’s approach to its victims, combined with its aesthetic, renders everything a bit frigid. Strickland owes an obvious debt to the Italian giallo films of the 70s and the chamber dramas of Rainer Werner Fassbinder, and his single-minded commitment to this style may well make you wish you were watching the genuine article. At the same time, the fact that Strickland takes so much care in the image sets him apart from many directors working today. Occasional interstitial sequences of collage-like still photographs are artful enough to stand on their own, and every element of the department store – its commercial, its catalogue, the font of its logo – makes us feel we’ve gone back in time. It’s a wonder we don’t immediately see a shopper ask what the hell is going on. The world of In Fabric demands a suspension of disbelief, and while the aesthetic rewards are plentiful, the emotional ones are less so.