A bold evocation of the eras of both analogue sound and the Italian giallo, Peter Strickland’s Katalin Varga follow-up is smart, stylish, witty – and just a mite bloodless. 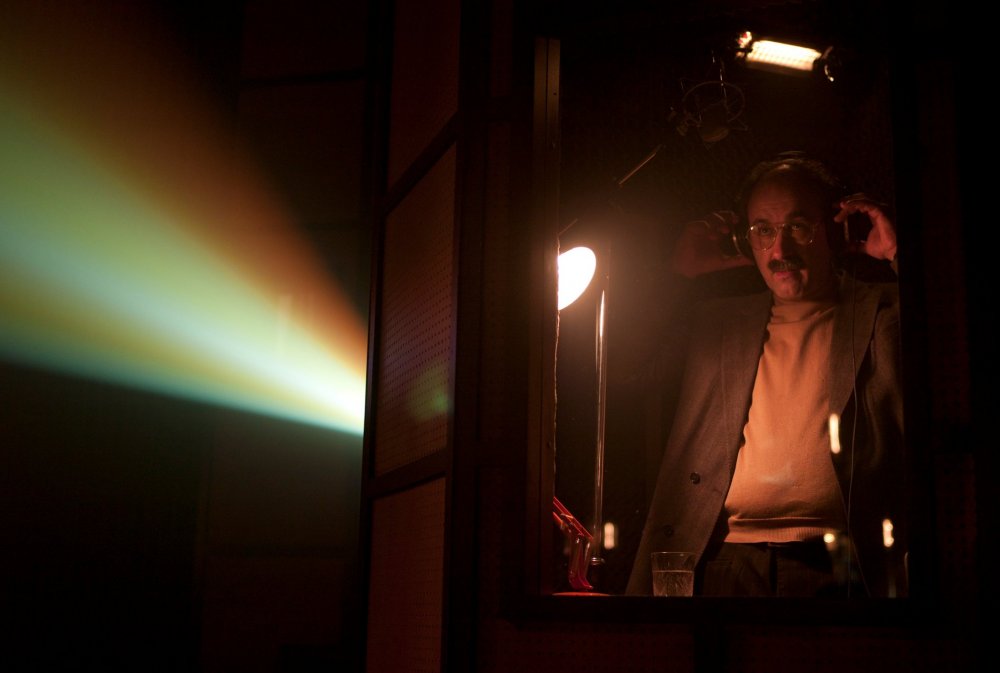 A cabbage, a kitchen knife and a microphone: what untold depths of horror can be delved into using just these items? In a parallel dimension it could be a task from Blue Peter.

This second feature by Katalin Varga director Peter Strickland is a love letter to the weird territories of foley and film sound and also to giallo, the Grand Guignol horror genre carved into the flesh of Italian cinema by Argento, Fulci, Crispino, Avati et al in the 1970s. It follows Gilderoy (Toby Jones), a tweedy, buttoned-down sound engineer, as he leaves the cosy quiet of his home in 1970s Surrey for Italy, to work with Santini, fictionalised giallo producer and impresario. Like Dracula’s Harker, Gilderoy is an innocent abroad, a Home Counties product bewildered by Continental sophistication, an employee increasingly aware that there is something not very… nice about his new employers.

The film opens with Gilderoy arriving at the reception of the Berberian Sound Studio to work on the post-production of Santini’s latest picture, and once there it never leaves. It’s an intensely inward-looking piece: in contrast to Katalin Varga (2009), a revenge narrative shot on location with natural lighting, Berberian Sound Studio is entirely enclosed, taking place within a claustrophobic handful of rooms and corridors under electric light. As a film about a film genre it hits all the notes of classic giallo: Santini’s project, The Equestrian Vortex, is an outrageously sexploitational potboiler, overflowing with blood, nubile young women, undead witches, horrific torture and an ‘aroused goblin’.

Berberian Sound Studio is also fascinated by the mechanics of its own form. The camera roves over Gilderoy’s charts, his maps of how sounds and effects will overlay the visuals. It zooms in lovingly on the moment of projection itself: the glare of white light, the dust dancing, the click and whir of wheels, reels and spindles.

But above all, of course, this is a film that revels in sound, its production, its recording and mixing. It fetishises unashamedly the look, feel and sound of vintage analogue recording gear: valves hum, metal reels revolve, spiderwebs of tea-brown tape loop round the room, recalling those lingering shots of what was then cutting-edge tape technology in other films of the 1970s: Coppola’s The Conversation or Alan J. Pakula’s Klute. At one point Gilderoy demonstrates a device called the Watkins Copicat for lead actor Silvia, dazzling her with the uncanny way in which its simple tape-looping mechanism doubles, triples and quadruples her voice, its echo and its echo’s echo to create a sonic hall of mirrors. 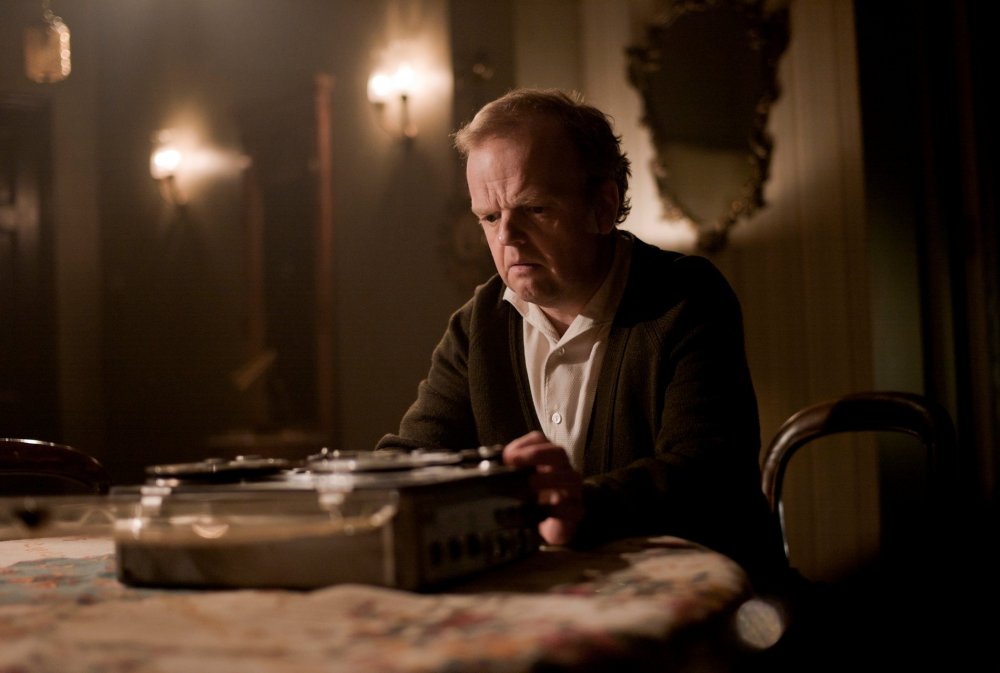 Numerous scene shifts pivot on a shared sound: a shriek that spooks Gilderoy in his apartment might gutter out to become the beginning of a scene with him behind the mixing desk once more, about to press rewind on the same shriek. As the film progresses and Gilderoy unravels, the weight of these sonic illusions and tweaks begins to play on the viewer’s mind. The dialogue is increasingly in Italian rather than English. Is Jones overdubbed, you wonder, trying to track the movement of his lips to his lines? Is it a meta-comment on how ‘embedded’ and native Gilderoy has gone, how thoroughly absorbed into giallo he has become?

The music matches, or rather bleeds seamlessly into and through, the playful use of sound and sound effects. There are pitch-perfect pastiches of the soundtracks created for giallo by Italian prog groups such as Goblin (Argento’s Suspiria and Deep Red most famously) – ambitious collages of synth, exotic percussion, musique concrète, electronics and rock that scaled the full heights of hysterical bombast. In fact the soundtrack is largely British, with original music composed by James Cargill of Broadcast, and Nurse With Wound and Roj used elsewhere. In this sense it taps into an aesthetic current in British music known as hauntology: the artists involved (centred on the Ghost Box label) use loving pastiche to recreate a milieu that, since Thatcher, has seemed improbably antique in its commitment to egalitarian modernism and public service fostered in such institutions as the pre-marketised BBC.

Gilderoy is a quite brilliant portrait of a particular type of near-extinct British boffinry beloved of hauntologists. “Oh, I’d rather not get technical,” he murmurs at one point, desperate to avoid another intense, Latin conversation. The joke is that getting technical is precisely his strength – at one point he holds a room spellbound with his impression of a hovering UFO, conjured using a light bulb and a radiator. References to his past work in children’s TV and documentaries set him up as a kind of amalgam of the garden-shed inventiveness of Oliver Postgate and the Radiophonic Workshop with the public-service ethos of the Open University. Jones plays him with admirable restraint: while Cosimo Fusco as director Coraggio fills the cramped studio, ruthlessly annexing personal space, Jones’s performance is so understated that Gilderoy’s deterioration can be tracked through his slow decline from perfectly turned out to tie-less, unbuttoned slob.

The viewer never sees a frame of The Equestrian Vortex, apart from the title sequence (brilliantly realised by designer Julian House from Ghost Box). Instead you watch others – Gilderoy, Coraggio, Silvia, Santini – watching it, their faces pallid or blood red in its reflected light. It comes to exist for the viewer as if in negative: things normally hidden or disguised in its production are unveiled and foregrounded. Instead of human viscera, we see the watermelons laid out on tables as studio assistants belabour them with machetes, creating a sound-only orgy of violence. Enacting this violence takes a particular toll on Gilderoy: having to perform endless takes in which, through the proxy of that cabbage and kitchen knife, he eviscerates an undead witch or penetrates her with a red-hot poker becomes a form of psychological torture for him.

Santini’s reaction to Gilderoy’s qualms over the material is intense. “It’s not a horror film,” he insists, “it’s a Santini film.” If it is violent, he explains, it is only because reality is violent and he must convey the truth of reality: he has a moral duty to do so. It’s a revealing moment, when suddenly we could be listening not to Argento or Fulci confronted by Mary Whitehouse but rather to Eli Roth, and Strickland taps into a long discourse about violence that extends far beyond giallo, both further back in time and right up to the torture porn of the present day.

Such serious debates don’t dominate Berberian Sound Studio though; more often it’s quietly very funny, especially in its use of Gilderoy for bathetic payoffs – the spell of a blood-curdling take or sequence will be broken by a mild request for some fresher marrow. It’s a joke Strickland uses brilliantly and returns to often – and perhaps found too hard to resist.

My criticism of Berberian Sound Studio is that in the end – or at the end to be more precise – it isn’t scary enough. Does it need to be? Strickland is on record as saying, just as Santini says of The Equestrian Vortex, that it’s not a horror film, “not in a million years”. It is then more accurately a film about horror; and yet this creates an awkward collision. Gleefully invoking a bucket-load of genre markers, Strickland also throws in numerous signifiers of dread: an implacably blinking blood-red ‘silenzio’ light; slow zooms on a barrel of discarded vegetables, rotten and pulsing like decomposing viscera. There’s an implied arc familiar from any horror film, towards a final welter of blood and gore, or a monstrous reveal.

Berberian Sound Studio refuses such a climax: it at once celebrates giallo and takes it apart, disassembling it like Derren Brown explaining an illusion. The more naturalistic, bloodless narrative, in which Gilderoy breaks up as a person, isn’t carried through to the extreme a giallo-inspired film would seem to demand. Strickland’s film is perhaps more Gilderoy-like than he realises: approaching this genre in polite tribute but too reserved to follow it behind the bloody curtain into the desecrated crypt.

Further reading in the September 2012 issue of Sight & Sound

The art of noise