Ghost of the Golden Groves first look: a haunting trip into the backwoods of Bengal

From this year’s London Indian Film Festival comes a surreal and unnerving debut for Aniket Dutta and Roshni Sen, who evoke the spirits of the Japanese New Wave masters in this diptych of elegant yet absurd ghost stories.

“Seijun Suzuki, Kaneto Shindo, Teshigahara”, declares an otherwise mute stranger encountered in the Sonajhuri (literally ‘golden grove’) forest by official land surveyor Promotho (Joyrak Bhattacharjee). The stranger’s words sound like incongruous gobbledygook in the setting of backwoods rural Bengal, but in fact they are names of directors from the Japanese New Wave of the 1960s – also the decade in which Ghost of the Golden Groves is set – and their influence can be keenly felt here. Like Masaki Kobayashi’s Kaidan (1964), this is an irrational series of disconnected ghost stories with an ethnographic flavour; like Hiroshi Teshigahara’s Woman in the Dunes (1964), it follows the entrapment of a city expert in the boonies; and like Kaneto Shindo’s Onibaba (1964), it features a demonic mask.

Written and directed by Dutta and Sen (known collectively as ‘Harun-Al-Rashid’, named for the caliph from the Arabian Nights who is always in disguise), Ghost of the Golden Groves opens with a monochrome wide shot of Promotho, who has just arrived by train from Calcutta. If the black-and-white photography matches the post-war period setting, the strange electronic waves of Dutta’s score seems to have been beamed in from a later era. Indeed, at various points the film will strain to transgress its own formatting and to break its own fourth wall.

In the first of the film’s two stories, entitled ‘The Polymorph’, Promotho is transported from the train station to his new digs at the Circuit House by night. He asks the carriage driver what the green light is that he can see in the forest. “What?”, the driver will respond, “Where do you see a green light? Everyone sees in black and white, sir!”

In a way, everyone inevitably does, given that the film is shot in monochrome, but Promotho’s ability to see beyond this is the first suggestion of an uncanny apparition breaking through the natural order. This numinous spirit of the forest will also be represented visually through occasional cutaways to abstract patterns and geometric shapes, realised digitally and therefore conspicuously alien to the surrounding woodland terrains. Drawn from the relative safety of Circuit House by the masked ‘polymorph’ Komol Mete (Bidyut Das) on the promise of a theatrical performance, Promotho will eventually, like his predecessor, become lost in the wild, primitive lands that he has come to mark out for new roads. Promotho’s own modernist rationalism will prove no defence against primordial shape-shifting demons who refuse to observe redrawn boundaries or ordinary rules. 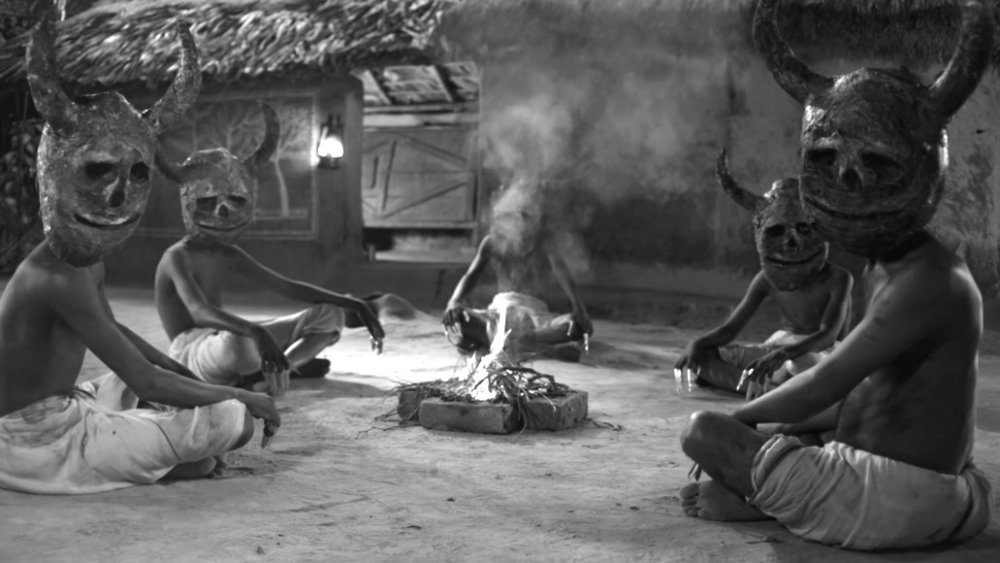 In the second of the film’s sections, ‘Maya’ (based loosely on a short story by Bibhutibhushan Bandyopadhyay, best known for his 1929 debut novel Pather Panchali), unemployed cook Bibhuti (Soumyajit Majumdar) agrees to become caretaker of the large isolated house and garden owned by old Nibaran Chakraborty (Jayanta Banerjee) – despite warnings from locals about the fates of previous caretakers. If Promotho was able to see green in a black-and-white world earlier, here we too can see beyond the veil, with monochrome shifting to full colour every time the jovial cook is visited by a mysterious woman (Debleena Sen) or a company of gas-masked figures from the future.

Unlike Promotho, who is terrified of his Satanic persecutors, Bibhuti is barely perturbed by his uninvited guests, and stays on despite their regular incursions. Two years later, on stage with a microphone and unsure how he even got there, he tells his strange story to a barely engaged audience, in an act that would be no less transcendental if he were addressing us directly.

Beautifully framed and shot (by DP Basab Mullick), Ghost of the Golden Groves is an elegant yet absurd diptych of supernatural tales whose odd parallels and asymptotic connections only add to their unsettling sense of illogic. Here place is fixed but time is fluid, here paintings on the wall chime with figures in the narrative, here ordinary doorways, once opened, are also portals to other dimensions, and here real locations are haunted by madness, the surreal and the hallucinatory.

Most of all, though, here everything is an ongoing performative masque, where art and expression are themselves the forces that transform everyday experience into something eternal, and where ghosts, even if they make little sense, must be storied.