From Maharashtra to Kerala to West Bengal, filmmakers in the world’s biggest movie industry are turning to the Bard’s tragedies against a backdrop of rising state repression. 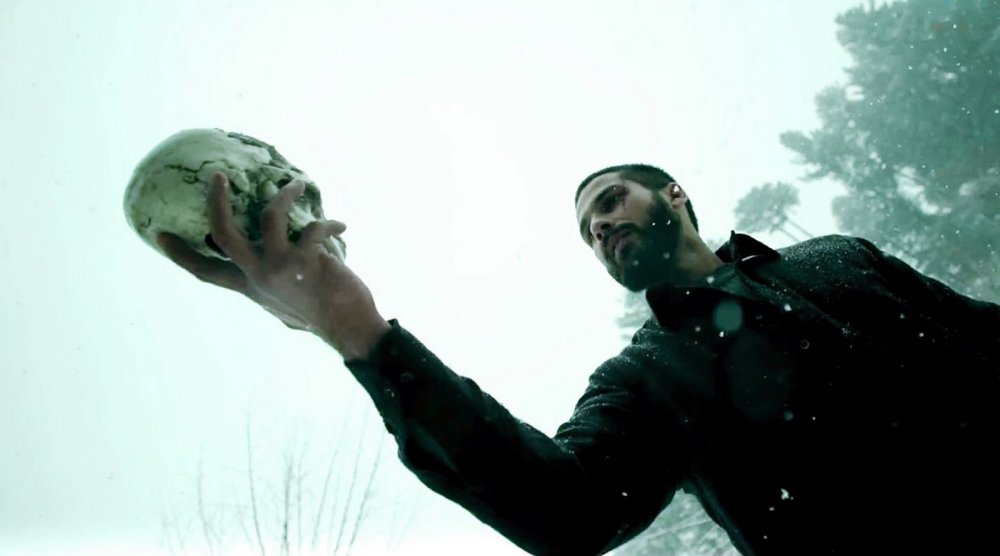 From 27-30 April, Indian Shakespeares on Screen at Asia House and the BFI in London will host some of India’s most exciting filmmakers, working across the subcontinent in multiple languages, celebrated by low and highbrow audiences and attracting major critical acclaim from Mumbai to Cannes. Their lure is the use of a unique cinematic language, both passionately interior and intensely political, to explore the social and linguistic complexities of India and its place in the world today. They do it via Shakespeare.

Indian Shakespeares on Screen, a festival of screenings, talks and an exhibition of film artefacts, takes place 27–30 April 2016 at at Asia House and the BFI.

In a country with an overzealous censor and a militant Hindu nationalist Prime Minister, this is no easy task. Recently the Indian government invoked sedition laws formulated during British colonial rule, ordering the police to enter the campus of Jawaharlal Nehru University (JNU), one of the most prestigious in India. There they unlawfully arrested the Students’ Union president Kanhaiya Kumar for allegedly criticising the government and expressing ‘anti-India’ and pro-Kashmiri-secession sentiments at a student gathering held on the anniversary of the death of Kashmiri activist Mohammed Afzal Guru.

Seen against this backdrop, Aparna Sen’s Arshinagar (Mirror-ville, 2015), a Bengali retelling of Romeo and Juliet, makes a statement. It’s a musical with a socio-political drive, examining how Indian politicians fan the flames of communal tensions for political gain. The Montagues are Hindu and Capulets Muslim; Baul and Sufi musical traditions associated with Hinduism and Islam are juxtaposed, and the different theatrical traditions such as direct address and painted backdrops underline Sen’s message that, “Someone should tell the fundamentalists that… Hinduism talks of oneness in all existence.” 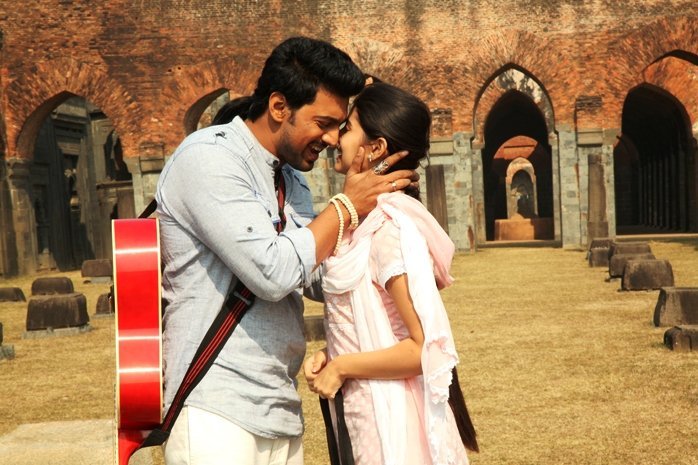 Arshinagar (Mirror-ville, 2015), a Bengali version of Romeo and Juliet in which politicians exploit religious divisions

Though it references Baz Luhrmann’s Romeo + Juliet (1996), West Side Story (1961) and Chicago (2002), Sen’s adaptation is groundbreaking in its use of dramatic verse in a mainstream commercial Indian film. Her characters speak a contemporary and colloquial poetry, generously mixing English, Urdu and Hindi with urbane Bengali, undermining via language the communal divisions Shakespeare’s play also critiques.

South Indian director Jayaraj Rajasekharan Nair, better known as Jayaraj, is the maker of the Malayalam Shakespearean trilogy: Kaliyattam (1997), based on Othello, Kannaki (2002), based on Antony and Cleopatra, and Veeram, his forthcoming adaptation of Macbeth. 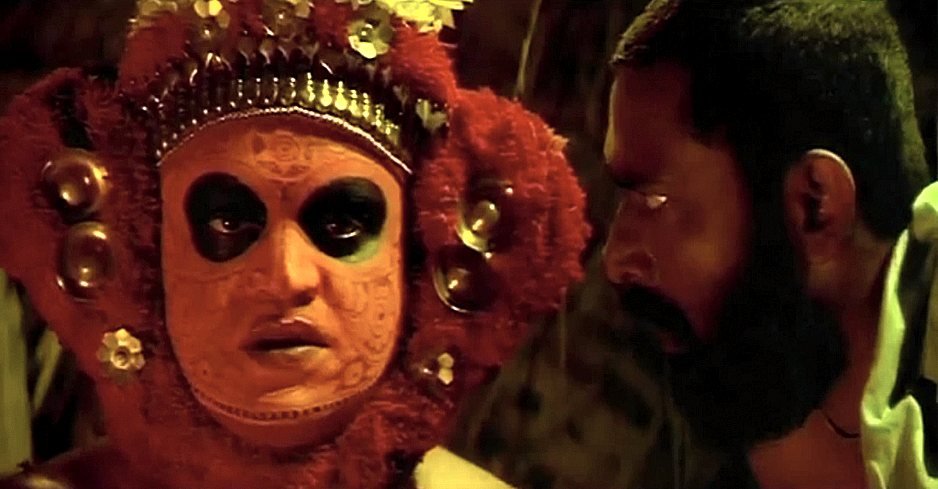 In Kaliyattam, one of the most compelling screen commentaries on the caste system in India (yet hard to see outside India), the male protagonists are cast as traditional Keralan Theyyam dancers. The low-caste Othello (Suresh Gopi) takes the lead, personifying the deity being worshipped in the dance. As he performs he is inhabited by the divine spirit and becomes a manifestation of divinity, worshipped by the upper-caste people who would normally not even allow his shadow to cross their paths. The arrangement captures Othello’s double status as outsider and insider, and comments on the contradictions of caste politics, art and religion in Kerala.

If Jayaraj’s focus is local, Vishal Bhardwaj, whose work sits at the centre of the Indian Shakespeare canon, takes a more global approach, and his films are made with a vast, diverse audience in mind. Maqbool (2003), Omkara (2006) and Haider (2014), based respectively on Macbeth, Othello and Hamlet, each achieved critical and commercial success in India and beyond. 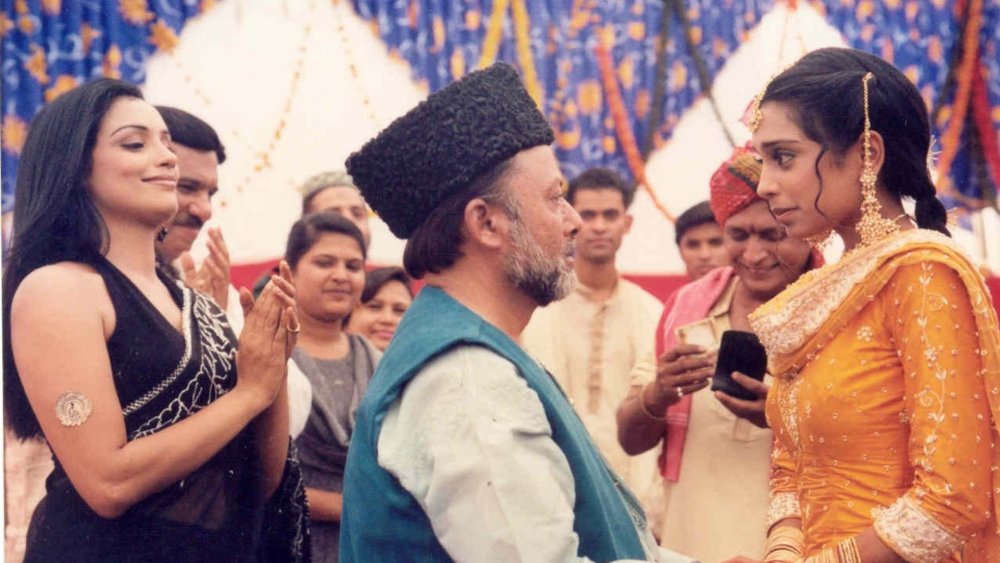 Maqbool (2003), a version of Macbeth set in the Mumbai underworld

Deeply influenced by Japanese director Akira Kurosawa’s Throne of Blood (1957), Bhardwaj decided to relocate his Macbeth to the Mumbai underworld. As he explained in an interview with Rediff: “For a long time, I wanted to make a violent film so that I could deal with themes of great conflict. But I did not find interesting material. It did not compel me. I wanted a story that focused on the human condition. A few years ago, I saw Akira Kurosawa’s 1957 classic Throne of Blood, inspired by Shakespeare’s Macbeth. That film was my immediate inspiration. I read Macbeth many times and then started working with Abbas Tyrewala to adapt the play.”

But that equally led to a film that is subversively critical of communal tensions in India. As Blair Orffal notes, Bhardwaj “channels Macbeth via Throne of Blood to stage a specific historic negotiation and representation of minority Islamic culture within India as Hindu fundamentalism threatens to overrun the once diverse city of Mumbai.” Drawing on Kurosawa’s mixed genres of tragedy and ethnography, Bhardwaj “creates a tragic ethnography to memorialize Mumbai as a city with threatened shores.”

In Maqbool, Abbaji/Duncan is a patriotic Muslim Indian, despite being the patriarch of the Mumbai underworld; Bhardwaj’s attention to the costume, accent, food, architecture and tehzeeb (culture and etiquette) typical of this culture is pointed and nostalgic. The film suggests, in its rich colouring and lilting music, a waning Muslim milieu in the wider context of India comparable to Kurosawa’s post-war chronicling of Noh theatre traditions specifically, and a period of Japanese samurai history generally. 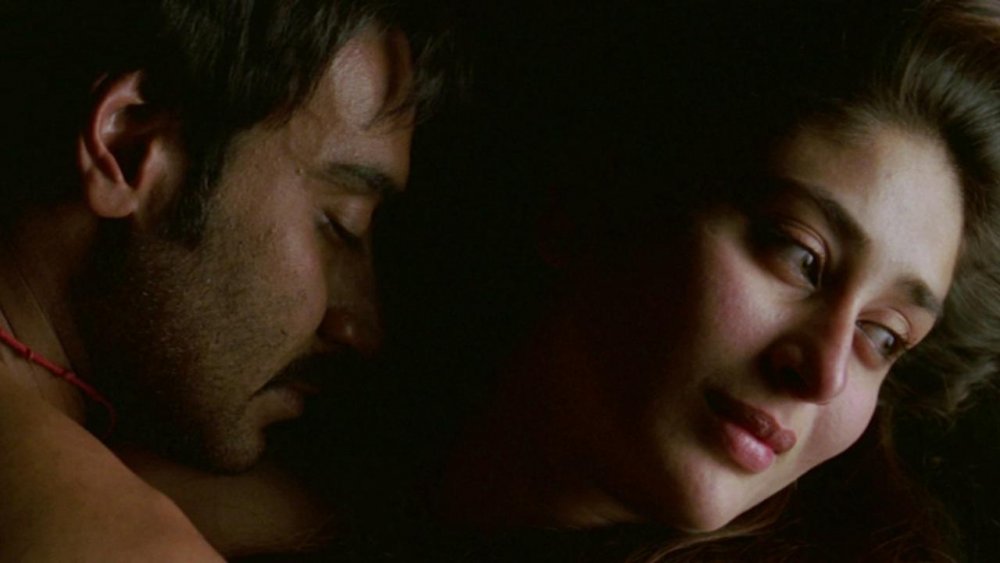 Bhardwaj’s second Shakespeare film, Omkara, premiered at Cannes and positions itself within the annals of global adaptations of Othello such those by Orson Welles in 1952, Lawrence Olivier in 1965 and Oliver Parker in 1995. By doing this, the film sidesteps the long and complicated history that Othello has in India, beginning with the infamous San Souci Production of 1848, when the lead was played, as the fly bill announced, by a ‘Native Gentleman’, the Bengali actor Baishnab Charan Adhya. He took the lead in a time when white actors blacking up was the norm for the civilised audience attending the colonial theatre.

Working within mainstream commercial film industries, Sen, Jayaraj and Bhardwaj not only approach Shakespeare as original material through which they can hold a mirror up to the world, they also open up new ways of interpreting the original texts within more modern contexts. They break with the tradition of Indian Shakespeares on screen by adapting full texts rather than merely referencing the plays, and by delving into the tragic genre, a category that is rare in Indian literature and art. They do this perhaps because times have changed – perhaps this is a post-postcolonial world and the genre of the Shakespearean tragedy, unlike others including realist film, provides the structure and distance to mourn the loss of the recent past – lost due to the homogenising effects of globalisation.

That doesn’t mean they don’t recognise their antecedents. There were three main routes through which Shakespeare permeated the Indian film industries: the literary absorption of Shakespeare after the English Education Act of 1835, Hollywood and the Parsi theatre. The latter form flourished between the 1850s and 1930s and was a forerunner to Bollywood, with its entertainment-driven format combining folk and musical theatre traditions with Gujrati, Hindi and Urdu influences. 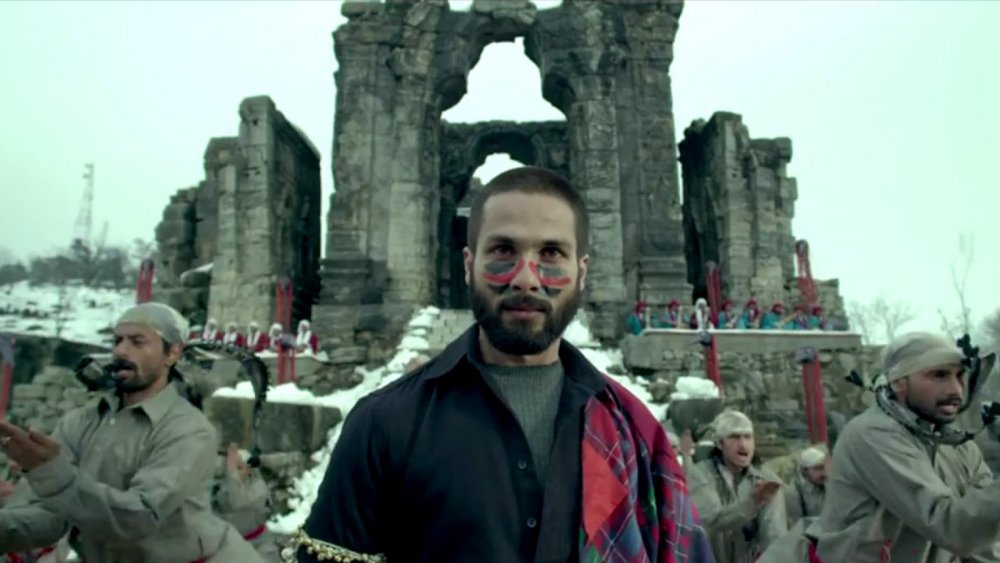 All these are critiqued in Bhardwaj’s most recent film Haider (2014), a Hindi/English-language version of Hamlet set in Kashmir. Its Rosencrantz and Guildenstern are Salman and Salman, two corrupt stooges in the pay of the occupying force of the Indian Army, who own a video shop and are obsessed with the real-life actor Salman Khan. They mimic his Bollywood dances, then have to persuade well-meaning Western tourists to rent one of his films by telling them how famous the multi-box office busting megastar actually is. As it happens, Salman Khan’s own breakthrough film Maine Pyar Kiya (1989), which Salman and Salman love, is a thinly veiled Romeo and Juliet (though of course with a happy ending).

Haider also pillories the legacies of colonialism, rhyming ‘chutzpah’ with AFSPA in reference to a colonial-era law (the Armed Forces (Special Powers) Act) that continues to allow the Indian Army to act with impunity against the Muslim citizens of Kashmir. As in Omkara, Bhardwaj sneaks this critique in; it doesn’t have to be explicit given that earlier makers such as Ajoy Kar, in Saptapadi (The Seven Steps of Marriage, 1961), have already used Othello as metaphor for the struggle to establish an Indian national identity against the British.

Shakespeare has been appropriated not only for postcolonial critique but also to examine the relationship between different Indian identities since Independence. T. Prakash Rao’s 1968 Izzat focuses on the marginalisation and exploitation of the adivasis (tribal people) by the rich zamindars (landlords) and again uses Othello to comment on the colour, caste and class prejudices that still exist in India today. And one of the first appropriations of Romeo and Juliet to be set in contemporary times, Ek Duuje Ke Liye (1977), locates the star-crossed lovers within an issue of contention that is rarely addressed on film: the differences between North Indian and South Indian language and culture. 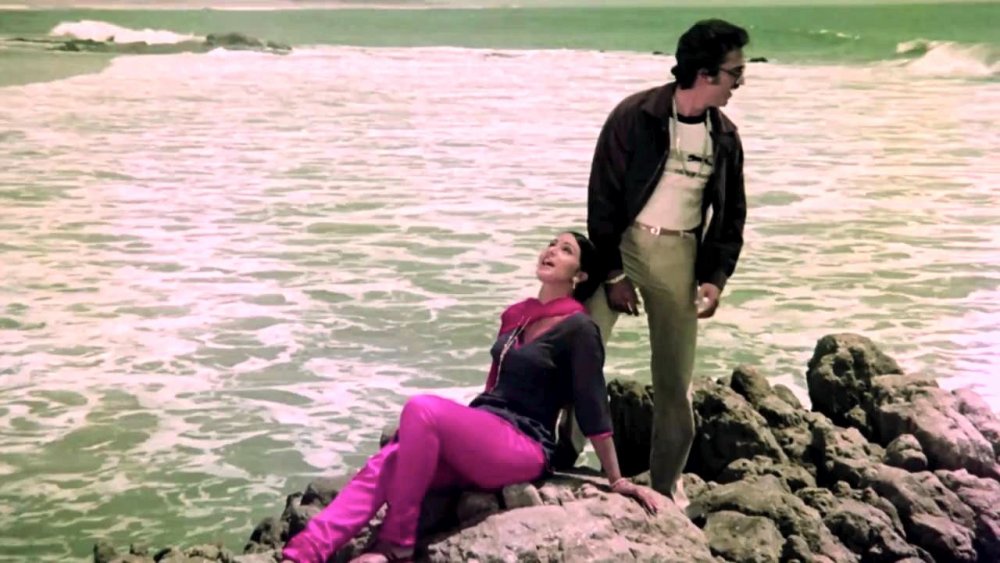 K. Balachander’s Ek Duuje Ke Liye (1977), a spin on Romeo and Juliet in which the love story bridges North and South India

Most of these films use Shakespeare with an easy familiarity and do not adhere too closely to the play texts. Meanwhile Shakespearean offshoots such as Merchant-Ivory’s Shakespeare Wallah (1965), Sen’s own 36 Chowringhee Lane (1981) and Rituparno Ghosh’s The Last Lear (2007) critique Raj-era nostalgia and its hangovers and use Shakespeare to comment on the demise of Empire and commercial film taking over from theatre as India’s most popular art form.

Like Bhardwaj’s Maqbool, many of these films are also set in Mumbai, heart of the Bollywood film industry. The city will also form the backdrop to The Hungry, a new version of Shakespeare’s most bloody tragedy, Titus Andronicus. Directed by Bornila Chatterjee and scheduled to shoot later this year, the film is the winner of Film London’s 2015 Microwave India scheme, for which Bhardwaj is the patron. What will a female director from the Indian diaspora make of this tale of brutal rape, silencing, murder, racism and cannabalism in Mumbai’s vast metropolis? If this film takes Bhardwaj’s cue, expect linguistic hybridity, gritty violence, corruption, family intrigue and lots and lots of blood, shot lyrically, with a poetic sense of landscape devoid of the exoticisation with which India is usually viewed through Western eyes. And what will the Indian censor make of that?