Film of the week: Star Trek Into Darkness

The second instalment of JJ Abrams’ franchise ‘refresh’ brassily goes where the series has gone before. 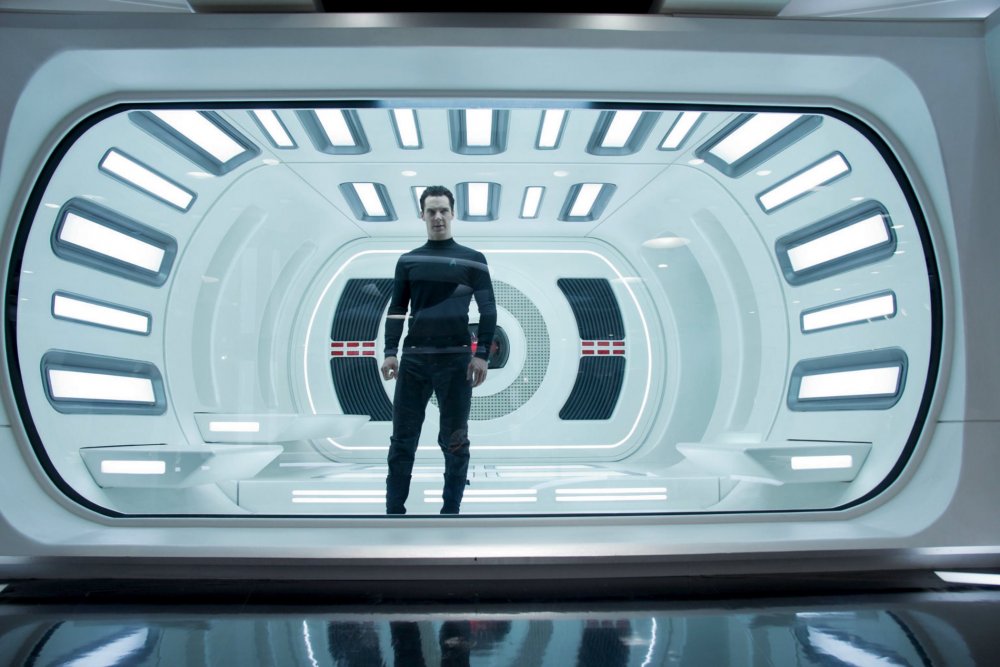 An advantage that science-fiction/fantasy sagas such as Star Trek, Doctor Who and the DC or Marvel superhero continuities have over more grounded franchises like the James Bond series is that weird science can be used to reboot lead characters (or the entire universe) to keep up with audiences.

J.J. Abrams’s Star Trek (2009) had a time-travelling villain shift all of Gene Roddenberry’s franchise into an alternate timeline whose sole survivor was Spock Prime (Leonard Nimoy), while establishing a fresh cast as new, rethought-for-the-21st-century versions of the characters from the 1960s TV show. Abrams signalled a willingness to wreak large-scale change on a well-established fictional universe by blowing up the planet Vulcan, though the point of the exercise was more likely to update the old show’s less forward-thinking attitudes by making Zoe Saldana’s Uhura a more proactive character (here, she’s the only crew member who can speak Klingon).

At the end of Star Trek, Spock Prime rather prissily decided not to give his young alternate (Zachary Quinto) spoilers about what was coming – though, with the whole universe already altered, it seems unfair not to mention, say, that when McCoy runs into his ex-girlfriend she’ll be an alien salt vampire (as seen in the 1966 TV episode ‘The Man Trap’). Here, the venerable survivor is consulted briefly and confirms that, in his universe, Khan was one of the worst threats the Enterprise ever faced – though someone who has experienced alternate timelines (as Spock did in the 1967 episode ‘Mirror, Mirror’) should perhaps give the rebooted Khan the benefit of the doubt.

The tendency of inward-looking franchises to disappear up their own black holes is not entirely avoided by Abrams’s fanboyish decision to present the whole of Star Trek Into Darkness as a revision of Nicholas Meyer’s Star Trek II: The Wrath of Khan (1982), generally regarded as the best of the original ten-film Star Trek movie series. His climax is a mirror-image of Star Trek II – with Kirk sacrificing his life (temporarily) by exposing himself to radiation to fix a malfunctioning part of the Enterprise’s engine (in a manner that also evokes the knowing spoof Galaxy Quest) as Spock did in the earlier movie, while Spock gets to bellow William Shatner’s once-upon-a-time signature line (“Khaaaaaaan!”) as he vows to avenge his fallen friend. 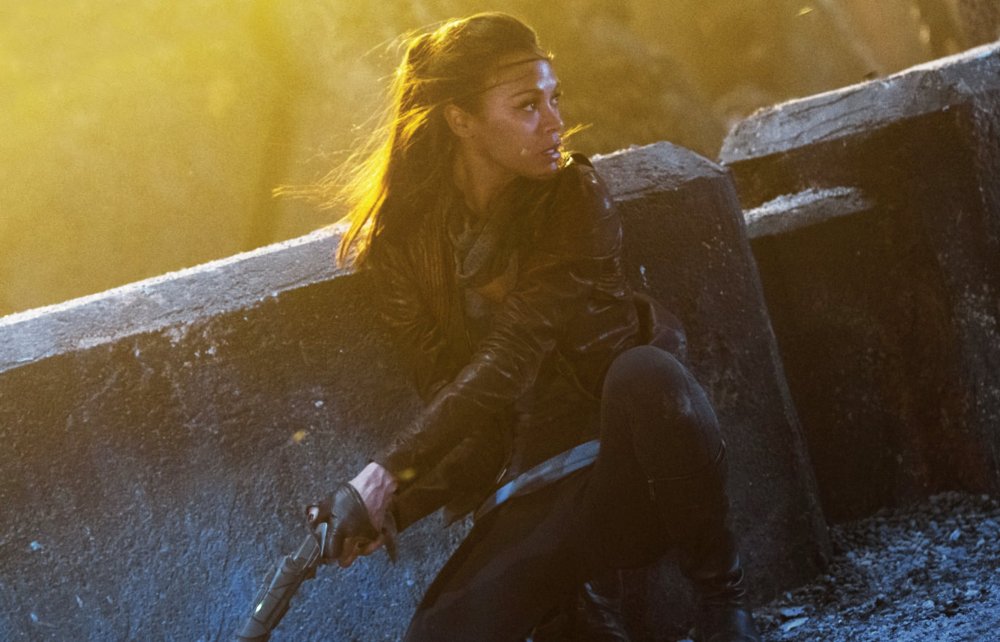 Even Alice Eve’s Dr Carol Marcus is a reboot of an often-forgotten Wrath of Khan character (played by Bibi Besch) briefly established as the love of Kirk’s busy life (and mother of his quickly-killed-off son) at a point when fan speculation that the married-to-his-ship Lothario’s real romantic relationship was with Spock had become a mainstream studio concern. Benedict Cumberbatch’s baddie is denuded of the complex ethnicity of Ricardo Montalban’s Khan Noonien Singh – a Hispanic with an Asian name, introduced in the original series in the episode ‘Space Seed’ – and relies on fiendish, bug-eyed Alan Rickman-for-the-new-millennium gurning to make an impact.

There’s no denying that Star Trek Into Darkness is fun in the way too many of the ponderous original-cast movies were not. It delivers a succession of high-speed action scenes, from space battles to fistfights, with interspersed character bits for each of the returning cast members, ranging from comic (Kirk in bed with tail-twitching alien twin babes) to emotional (Kirk’s mentor dying in his arms).

It blithely goes against Scotty’s old catchphrase “Ye cannae change the laws of physics” whenever it needs to. Indeed, Simon Pegg’s Scotty whips up interstellar teleportation technology and benefits from instantaneous hyperspace telephony just to keep the story going, though such innovations would radically alter the fundamental assumptions of the Star Trek universe.

More subtly, Abrams addresses criticism of the franchise’s militarism by stressing that the heroes’ mission is exploration not warfare, bringing on a mad admiral and pitting the Enterprise against an armoured, bullying starship designed only for combat. Chris Pine and Zachary Quinto continue to channel Shatner and Nimoy while presenting different versions of the well-known characters, and the rest of the regular cast all have moments in which they shine. 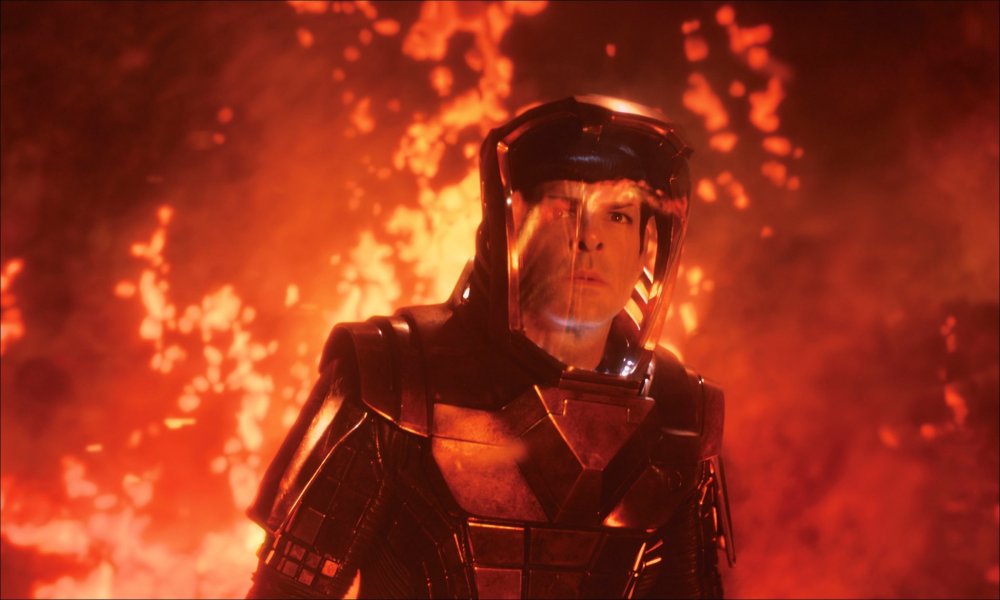 However, by stepping into another universe, there is an inevitable distancing effect. ‘Space Seed’ was a science-fiction story about the intrusion of a warlike past into a utopian future, with a complex attitude to its anachronistic warrior – Kirk even admires and envies the genetically enhanced Khan.

Star Trek II The Wrath of Khan was already more concerned with the fan-pleasing minutiae of Star Trek than the real-world issues addressed by the original series. Star Trek Into Darkness only touches on terrorism (Khan persuades a Starfleet minion to become a suicide bomber) and warmongering as they relate to its spin on Roddenberry’s vision.

Too much Star Trek has become – like too much contemporary Doctor Who – about itself to the exclusion of anything else. Into Darkness sets off on a mission to revisit places we have gone before in a manner that needs to be broken with if the franchise is to live long and prosper under Abrams’s captaincy.

Related to Film of the week: Star Trek Into Darkness