Film of the week: A Pigeon Sat on a Branch Reflecting on Existence 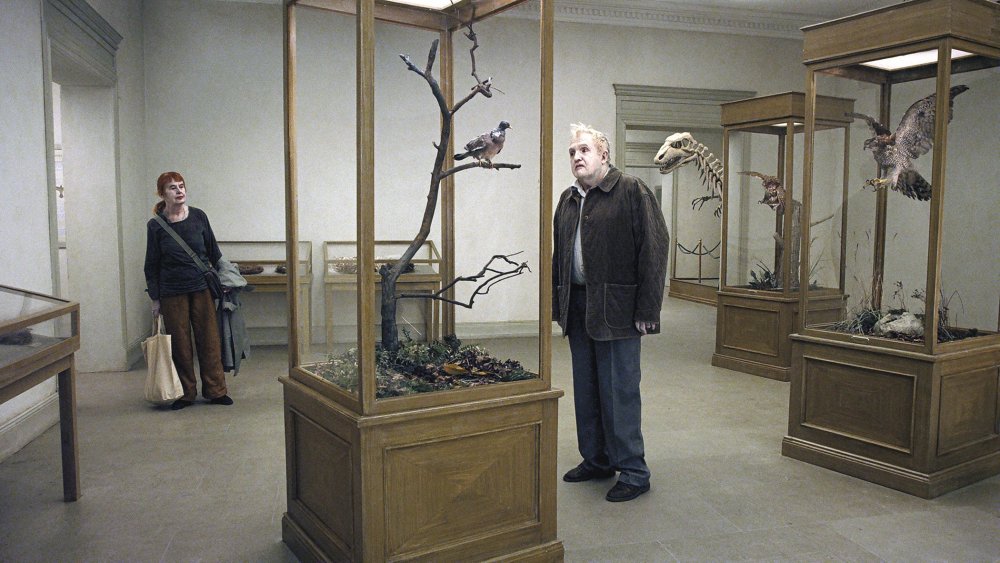 Roy Andersson is a single-panel absurdist who subverts the traditional set-up and knockdown gag structure, landing his punchlines like rimshots played on a busted cymbal. He has been compared to Tati and Fellini, though it seems to me that he has as much in common with Gary Larson or Charles Addams.

Billed by an opening title card as the “final part of a trilogy about being a human being”, Andersson’s A Pigeon Sat on a Branch Reflecting on Existence joins Songs from the Second Floor (2000) and You, the Living (2007) to complete the writer-director’s magnum opus. Given the time that Andersson takes between projects, and the fact that he is now over 70, it may also represent his last testament, and suffice it to say he hasn’t broken character.

The title’s ‘pigeon’ is an actual or implied presence at the opening and closing of the film. In the first shot, it’s seen as a taxidermied specimen in a museum display case; in the closing, it is represented by an offscreen coo that captures the attention of some taxidermied-looking Swedes waiting at a bus stop on a Wednesday morning. Andersson prefers to shoot from a perspective as fixed as that of the bird in the ornithology display – I counted one camera move in Pigeon, this a very slight pan to the right – while the way he stages scenes gives them the aspect of a vitrine or diorama, as opposed to the surveillance camera-perspective developed by Ruben Östlund, another native of Gothenburg. Andersson’s subjects don’t move much more than his frame does; they often stand almost stock-still, alienated from their environments and interfacing with them almost not at all, as though they’ve been green-screened into place. 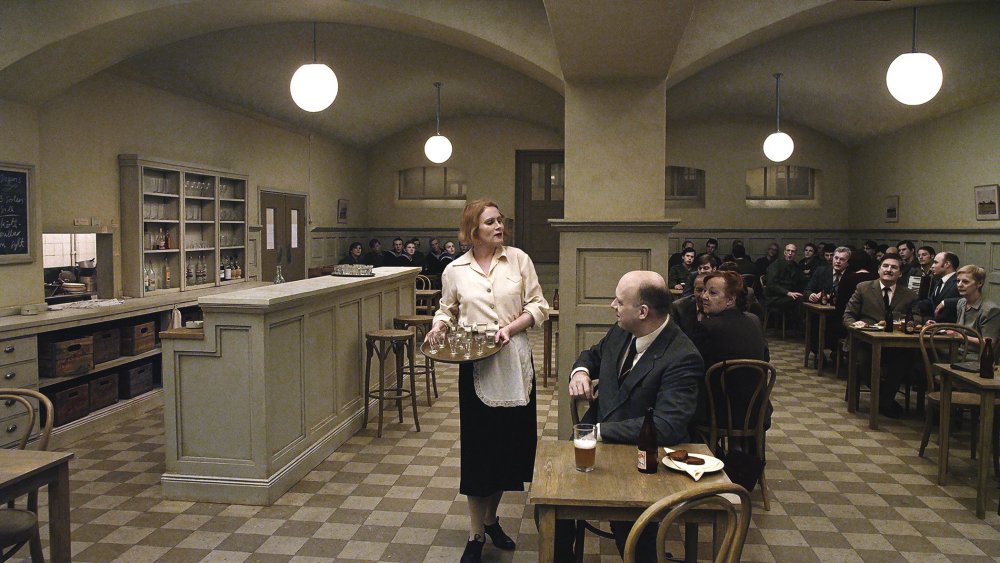 A Pigeon Sat on a Branch Reflecting on Existence takes place in Gothenburg in what appears, for the most part, to be a contemporary setting, though the presence of cell phones is one of the few elements that anchor the movie in the now. Everyone seen with a phone seems to be having the same conversation – “I’m happy to hear you’re doing fine” – and the populace is for the most part ethnically uniform, the whitest white people in cinema, wearing the corpse-paint pallor familiar from Andersson’s work.

Without fanfare, the film periodically leaps from the present to distant points on the timeline. The clientele at a bar discuss an ancient regular who’s been visiting for more than 60 years, and then a title card and a change of paint job announce the shift of the scene to 1943 – the year of Andersson’s birth – where we encounter someone who may or may not be that regular in younger days, silent witness to a boisterous singalong staged as a musical number.

The same melody is heard later in the film: in another bar, this one in the suburbs, business as usual is interrupted by a visit from Charles XII (1682-1718), and through the picture window his seemingly endless divisions can be seen marching past to the front. Later, the bedraggled remains of the force are seen heading in the other direction, retreating from the decisive and crushing defeat of the Battle of Poltava in 1709, accompanied by the wailing of widows. 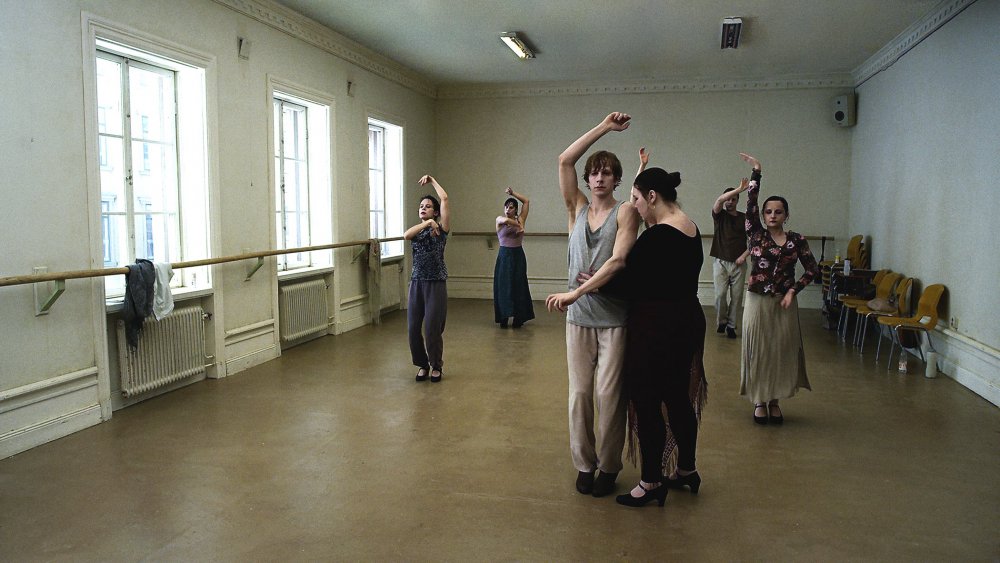 Such tenuous connections – a phrase or a tune that recurs in wildly different situations, like a fugue – are the threads that knit together Andersson’s quiltwork of blackout scenes, along with a loose community of recurring characters: a military man who keeps missing dates and a lecture on orderly withdrawal; a zaftig flamenco instructor and a male pupil for whom she burns with unrequited lust; and – the nearest thing the film has to protagonists – a duo of middle-aged novelty salesmen who schlep their wares around town. Their goods include plastic vampire fangs and a rubber mask more given to eliciting screams than laughter. Continually stiffed on payments by shop owners, the salesmen sleep in a drab men’s shelter where they themselves are hounded for outstanding debts. In one scene they pay a visit to a debtor who shoos them away, begging poverty. This is followed by a scene at a children’s recital, where a sullen, husky girl stumbles through a poem in which a pigeon reflects on “the fact that it had no money”.

Andersson’s version of “being a human being”, then, has a great deal to do with empty pockets, unpayable debts, with retreats and defeats – and this is in the best of cases. A section introduced with the title ‘homo sapiens’ begins in a test laboratory, where a woman in a lab coat prattles on her phone – “I’m happy to hear you’re doing fine” – while, in the foreground a chimp writhes under the administration of electric shocks.

Following on from this is a scene in which pith-helmeted colonials drive chained Africans into a monumental torture device; it turns their agonised cries into a haunted music, to be enjoyed by an elderly crowd dressed as though for the opera. Here we may understand the novelty salesmen to be Andersson’s alter egos, peddling a comedy that is very close to horror. 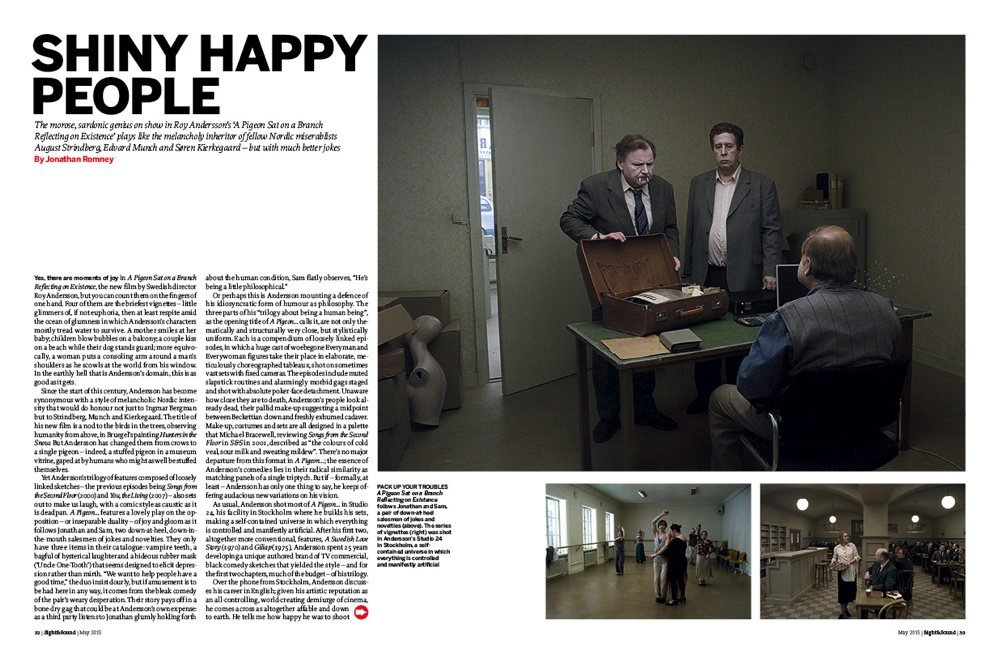 The morose, sardonic genius on show in Roy Andersson’s A Pigeon Sat on a Branch Reflecting on Existence plays like the melancholy inheritor of fellow Nordic miserablists August Strindberg, Edvard Munch and Søren Kierkegaard – but with much better jokes. By Jonathan Romney.

Related to Film of the week: A Pigeon Sat on a Branch Reflecting on Existence