Film of the week: Killing Them Softly

2008 comes over all 70s twilight in Andrew Dominik’s adaptation of a novel by Boston crime chronicler George V. Higgins. But why the directorial steroids, wonders Trevor Johnston? 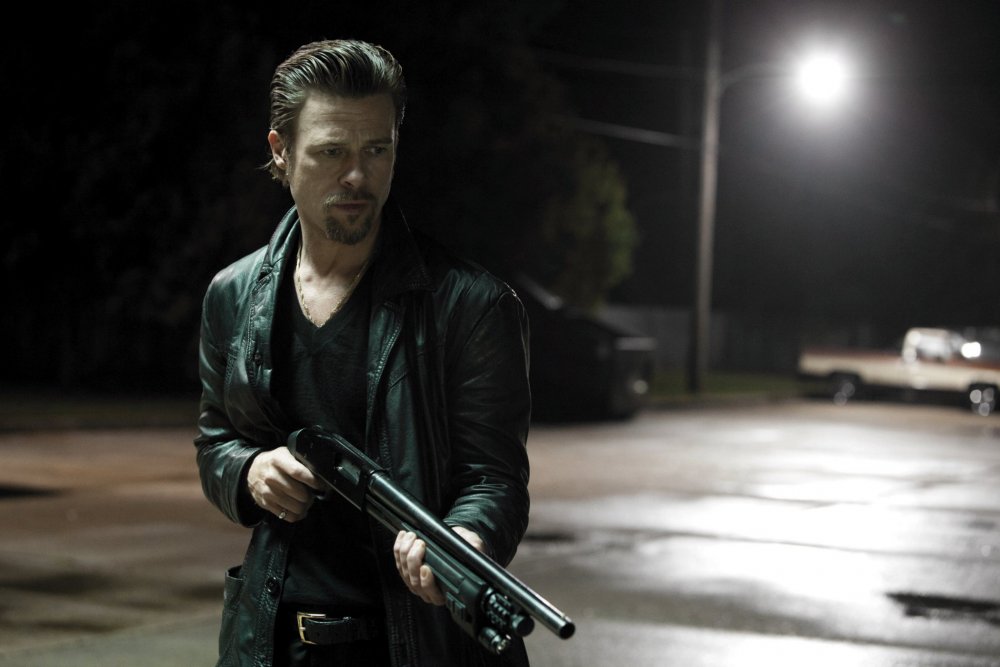 Two eras of modern Americana come together in Aussie writer-director Andrew Dominik’s adaptation of Cogan’s Trade, a 1974 novel by George V. Higgins, admired chronicler of the Boston underworld’s flexible morality and colourful lingua franca. Dominik sets its drama of small-time robbery and ruthless vengeance against the backdrop of the collapse of Lehman Brothers, Dubya’s twilight months and the coming of “Yes we can”. The constant voices of George W. Bush and Barack Obama on television and radio tell us it’s election year 2008, yet the big old gas-guzzling automobiles suggest the mid-1970s – as indeed does the camerawork’s tenebrous melancholy, very much in the school of Francis Coppola’s famed lensman Gordon ‘The Prince of Darkness’ Willis. The joins can’t help but be rather obvious, so we can only assume we’re being asked to make connections, and during a key heist sequence Dominik’s helpful sound mix purposely foregrounds a media commentator insisting “the key issue here is the distribution of wealth”. Not just a crime flick then, but a crime flick with ideological intent.

Drawing caustic comparisons between gangsterism and what one might term ‘The American Way’ isn’t exactly a fresh move, since those thoughts are certainly upfront in the likes of Coppola’s The Godfather trilogy (1972, 1974, 1990) and Scorsese’s Casino (1995). But while those films had more generalised things to say about the land of the free, Dominik’s conceit is much more specific, suggesting that the financial travails of 2008 and afterwards have opened up a fissure in the idea of community, revealing it to be a facade that masks a system run on pitiless self-interest and greed. The bullet-riddled world of organised crime is no mere discrete enclave within the wider body politic, but a disturbing microcosm of the whole.

It’s healthy to encounter such provocations in mainstream narrative American cinema, no doubt, but the question of whether it’s possible to use an otherwise fairly straightforward genre piece as a delivery method refuses to go away. How effective can the political message be, conveyed as it is through an ever-present media barrage as the action unfolds, rather than blended within it?

Filter out the background noise of electioneering and you have a rather choice crime pic which capitalises well on Higgins’s particular dialogue-led sensibility. Higgins’s method is to let the denizens of his criminal demi-monde meet and greet while the reader tries to figure out the plot like some pattern in the verbal carpet. Action tends to be implied through talk rather than chronicled in detail, which might explain why this is only the second of his books to be filmed. It’s almost four decades since Peter Yates’s spot-on 1973 adaptation of The Friends of Eddie Coyle (a tale of a veteran offender who tries to evade jail by making a clandestine deal with the cops) brought us one of Robert Mitchum’s great late performances. 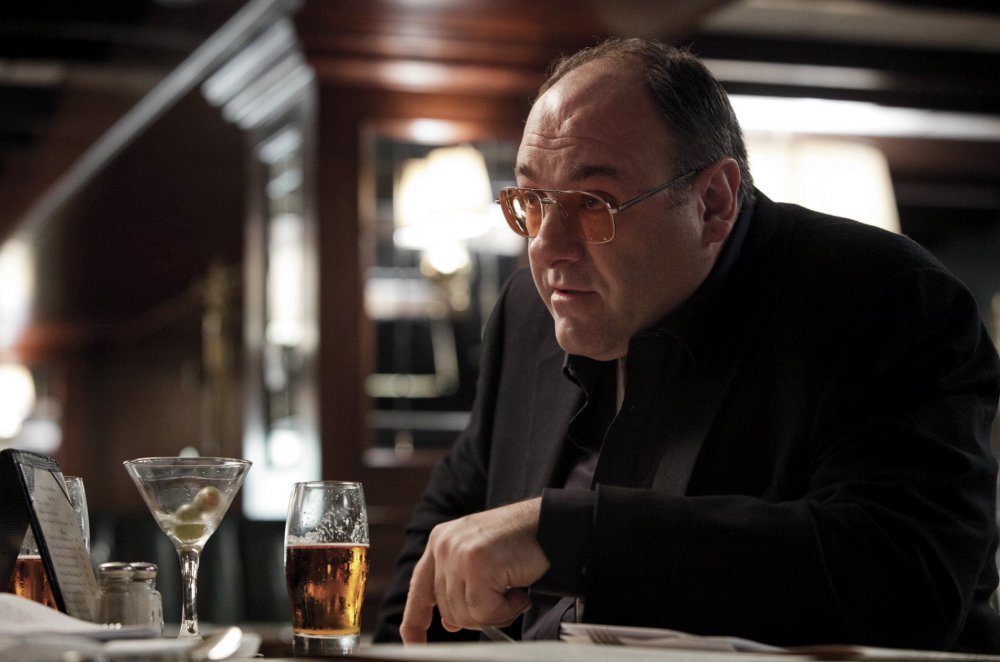 In both films, the characters’ pointed exchanges are central: everyone’s trying to play it cool while sharing a common understanding that wrong moves can and will be fatal. Yes, Killing Them Softly has sawn-off shotguns, a heist, illicit gambling and summary executions, but Dominik has grasped that the real issue in this world is that whatever anyone says, they all know there are no second chances.

One look at Scoot McNairy’s Frankie, a weaselly ex-con keen to get in on whatever job a crooked dry cleaner has in the offing, and we pretty much know he’s doomed. With regard to “the distribution of wealth”, he’s tried to play it straight but struggled to find work in a depressed economy. After he knocks over a poker game with addled cohort Russell (a deliciously greasy Ben Mendelsohn), tension mounts as Brad Pitt’s Jackie Cogan is hired by unseen criminals higher up to tie up any loose ends.

Frankie is the audience’s point of entry: a guy who just wants a shortcut to a better car, a better hairdo and more sex. But it’s Pitt’s amiable assassin Cogan who’s most memorable – he kills to order but prefers not to eliminate people he knows. It gets “touchy-feely” he says; the emotions prove too bothersome. Rather than get up close and personal, he prefers to pick his targets off long range: “killing them softly”, as he puts it.

Pitt’s limitations as an actor are only too evident when he steps outside his comfort zone, as in Babel (2006) or The Curious Case of Benjamin Button (2008). But he was notably effective as Jesse James, whose fearsome legend precedes him in Dominik’s 2007 western The Assassination of Jesse James by the Coward Robert Ford. As Cogan, the film’s producer-star flits from superficially personable bonhomie to dead-eyed murderous efficiency with silken facility. 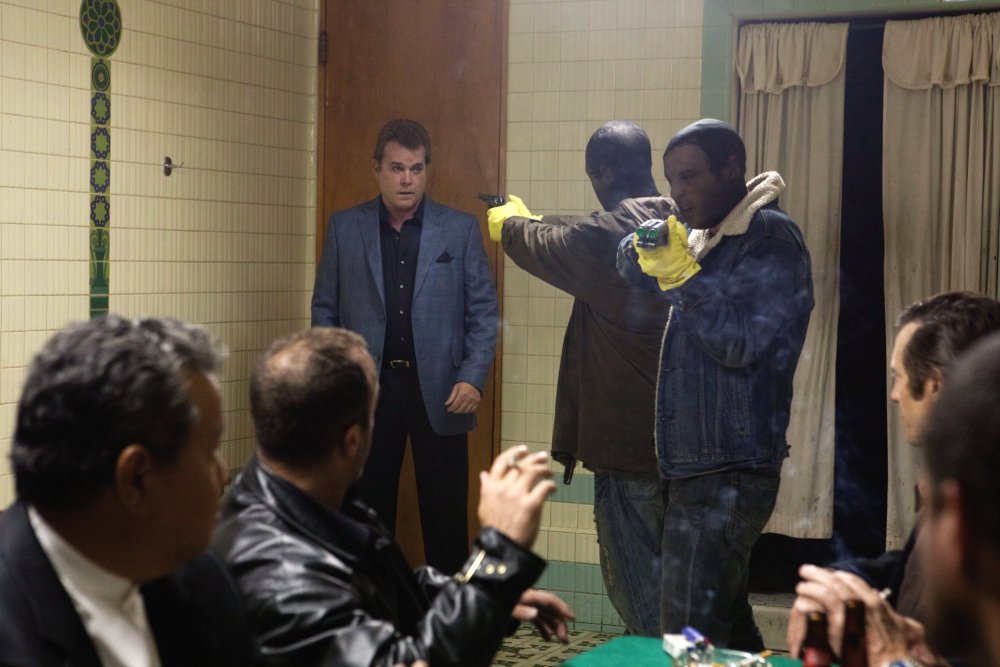 His performance alone is enough to make Dominik’s thematic point about the disconnect between the political class’s smiling affirmations of community and the cold self-interest of the economic combine it represents. But still the film persists with Democrat and Republican claim and counter-claim about the financial-market carnage of autumn 2008, spilling out from car radios and bar-room TVs. Dominik deployed such contrapunctal narration to useful effect in Jesse James, where snippets of an after-the-fact biography are inserted alongside the way-it-really-was story unfolding before our eyes, and clearly thought he’d give it another go here. It’s certainly justified thematically, but the injections of Obama-speak do sit awkwardly with cinematographer Greig Fraser’s distinctly 1970s visuals – vintage autos prowling through the night, headlights flaring in motel forecourts.

Dominik’s film is certainly no pristine retro artefact. For that he’d have had to follow Peter Yates’s example and kept the direction studiously reserved. Instead he contrasts the beautifully weighted dialogue scenes with more flamboyant action set-pieces, notably a slow-mo symphony of breaking glass and spurting blood as one driver meets his end at a traffic crossing, accompanied by Ketty Lester’s strings-drenched 1962 ballad ‘Love Letters’.

This is just one of a series of purposefully ironic song choices, including 1930s ditties ‘Life Is Just a Bowl of Cherries’ and ‘It’s Only a Paper Moon’ – the latter perhaps a nod to Peter Bogdanovich’s Great Depression movie Paper Moon (1973), itself perhaps an oblique comment on the Richard Nixon administration. While these unexpected musical moments cause a frisson, they seem overeager and overemphatic given that Dominik’s material is strong enough to speak for itself. So much here is note-perfect that it becomes intrusive when Dominik does push too hard.

Why over-gild the lily? An encounter between Pitt’s hitman and his seemingly respectable employer, a besuited mob functionary (expertly played by Richard Jenkins), is illuminating. At first the money man doesn’t grasp why they have to kill someone who is not responsible for the poker heist, even though the local community believes the person did the job. Then he gets it – it’s all about restoring trust in the lucrative gambling den: “Ah, I see: the public.” Innocence and guilt are secondary considerations to public perception and consumer confidence. In the same spirit, perhaps it’s important for a director to be seen to be directing?

Dominik certainly leaves his mark. Killing Them Softly is a striking film of starkly delineated personality, yet it falls just shy of greatness by seemingly never quite knowing when to ease up.