Don’t Worry About Me review

Liverpool’s seedy cityscape takes center stage in David Morrissey’s debut feature about a budding bittersweet romance unfolding over the course of one night in the way of Before Sunrise, yet struggles to live up to its classic predecessor. 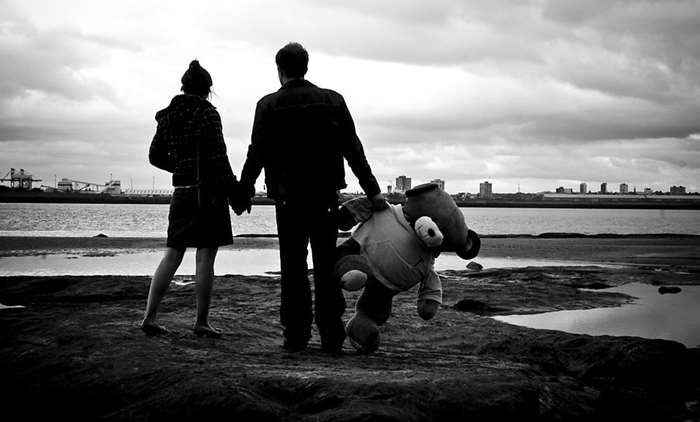 To David Morrissey’s credit, it’s nigh-on impossible to imagine how his feature debut could have started life on stage. The lead actors from (and writers of) the original play The Pool may reprise their roles in this cinematic adaptation, but it’s Morrissey’s home town of Liverpool that’s the film’s real star.

“Show me the sights”, cajoles James Brough’s Essex wideboy David of reluctant local lass Tina (Helen Elizabeth) at their initial meet-cute; and that’s precisely what Morrissey does, skipping clichéd images of Liver birds and the Walker Art Gallery in favour of the city’s more contemporary landmarks: the chrome and glass structures of the recently revived centre, dirty white turrets of the Catholic Cathedral and haunting, desolate vision of Antony Gormley’s Another Place project, its 100 life-size iron figures spread along three kilometres of the Sefton foreshore providing the film’s most indelible imagery, as well as an analogy for the characters’ overwhelming isolation.

With cheeky wag David having convinced the wary Tina to bunk off her betting-shop job for a tour of the, the two strangers stroll its streets and shores while swapping stories. Essentially Before Sunrise set in Scouseland, the film builds a bittersweet romance, the relationship reaching a dramatic climax of sorts in a confessional booth in the Cathedral.

But despite some beautifully shimmering, shadowy imagery elicited from the dividing mesh, it’s here that the story’s stage roots sadly break through its surface: without the city’s sleek but seedy settings to support them, the exposed actors start to struggle, and while Elizabeth just manages to pull off a moving performance as a girl-woman brought to her knees by life’s injustices, Brough’s glib, theatrical posturing throws the film off-kilter. As Don’t Worry About Me reaches its melancholy conclusion, one can’t help but feel Tina’s had less of a brief encounter, and more of a lucky escape.

Related to Don’t Worry About Me review