Building a small cinema in Liverpool

London isn’t the only city seeing new cinema construction in 2015; nor are market principles the only means of public film provision. Anthony Killick embeds himself with a crack troupe of volunteer cinema refitters remaking a former Liverpool magistrates court as a cooperative picturehouse.

In February/March 2015 a group of volunteers undertook the construction of a cinema space on the ground floor of a former magistrates court in Liverpool’s city centre. Inspired by the independent kinos of Berlin, the Small Cinema project had already converted a number of disused spaces around the country, including a former working men’s club in the Moston area of Manchester.

For a full list of the Small Cinema’s affiliates and programme, and to get involved, see liverpoolsmallcinema.org.uk.

Although the Liverpool project received some BFI funding, this was allocated to the programming and functioning of the cinema as opposed to the building of it. The construction process therefore necessitated the use of voluntary labour, as well as recycled and/or donated materials from a variety of arts organisations around the city.

In its stated aim of “creating cinemas not supermarkets” the project understands its position between two forms of modernity. On the one hand it operates within the political and economic restrictions imposed by a capitalist modernity that thrives on uneven geographical development and the “creative destruction” of urban environments. On the other hand the project aims to transgress those restrictions, creating spaces that are built and managed in ways that more accurately fit within the paradigm of a collaborative commons than a capitalist marketplace. In this context we witness the importance of alternative modes of cinema management and film exhibition, fostering a nascent filmic commons in an increasingly privatised urban environment where the corporate multiplex reigns.

The idea of a collaborative commons, a place where people can share goods and information for free, as well as take part in the development of their lived environment, is vital for any city that cares about culture and the well-being of its citizens. This includes physical spaces within the city that are shared and collectively managed, two principles that are fundamental to the Small Cinema project. Run on a voluntary, nonprofit basis, the cinema is premised on the idea that members of the public can get involved at various levels, including organising their own events, joining the programming team and helping with the general running of the cinema on any given night. “We want to understand”, as a flyer for the project states, “the relationship of cinema to community, to test models of film exhibition and question what a future cinema ecology might be.”

What the Small Cinema project, and many others like it, continue to show is that mutual cooperation and solidarity are just as capable as the market in the creation and development of space. The Cube Microplex in Bristol, for example, has been running on a similar ethos for almost 20 years, and recently managed to raise £185,000 required to stay open in large part through donations. Meanwhile the idea of collectively organised, nonprofit film screenings is increasingly popularised by film festivals, mobile cinemas, and cineastes of various guises looking for creative ways around austerity and its stifling effects on culture and cultural space.

For example, the volunteers you will see in this short are all part of various different film organisations in and around Liverpool. Having helped build the cinema, they now bring a diversity of interest to its programming. In this sense the Small Cinema becomes a hub of cross-organisation projects and partnerships, while also attracting the active participation of audiences whose previous relation with cinema may have been solely that of a static spectator. This level of interaction renews cinemas capacity to foster education, understanding and action, forging the basis for a way of thinking about the city and our lived environment, in which, as Marshal Berman says, “man will not exist for the sake of development, but development for the sake of man.” 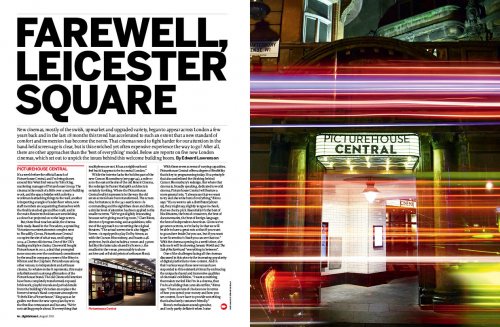 Farewell, Leicester Square: a special report in the August 2015 issue of Sight & Sound

New cinemas, mostly of the swish, upmarket and upgraded variety, began to appear across London a few years back and in the last 18 months this trend has accelerated to such an extent that a new standard of comfort and immersion has become the norm. Is this enriched yet often expensive experience the only way to go? Edward Lawrenson reports on five new London cinemas, which set out to unpick the issues behind this welcome building boom.

+ A place to call Home 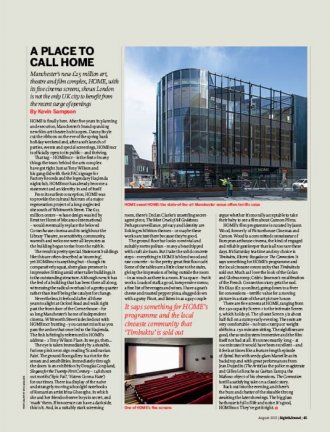 Manchester’s new £25 million art, theatre and film complex, HOME, with its five cinema screens, shows London is not the only UK city to benefit from the recent surge of openings. By Kevin Sampson.