What makes the ex-Supreme such an icon of the love song? 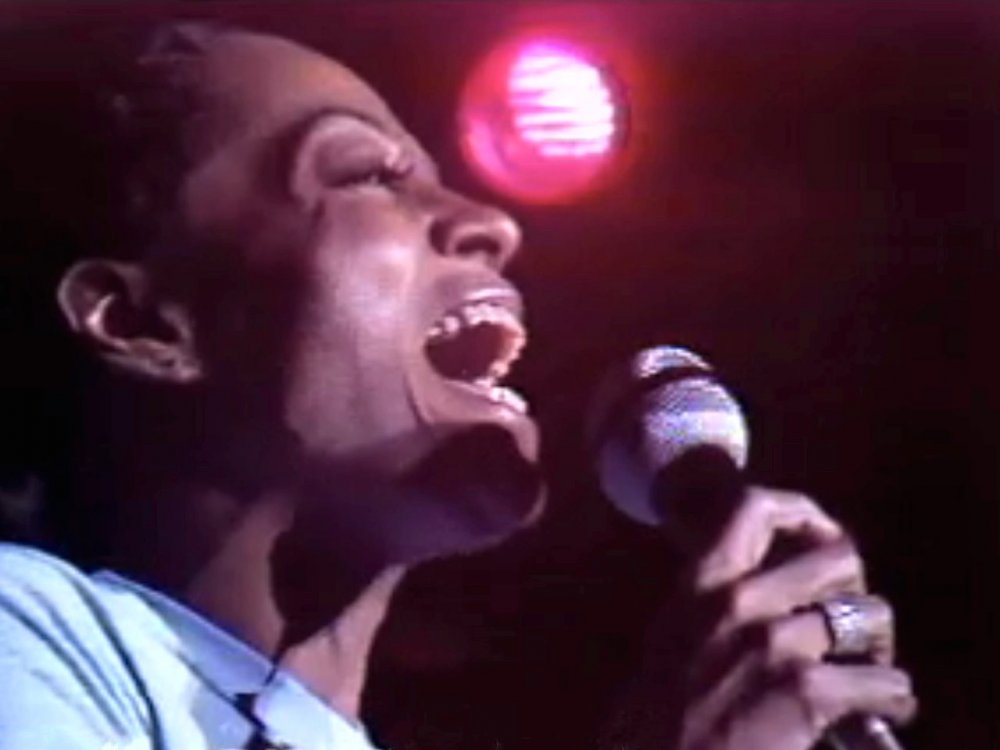 By 1977, when this month’s archive byte was filmed, Diana Ross had seven years’ experience as a one-woman act. Her first solo album, released in 1970, sold over 500,000 copies. Her first love song as a solo vocalist – a cover of Ain’t No Mountain High Enough – sold over 1.2 million copies in America alone, and was Ross’s first number one since ceasing to be frontwoman of The Supremes. By the time she embarked on her first US tour since she and The Supremes split ways, the tour that saw her play Boston, she had starred in two movies – in the Billie Holiday biopic Lady Sings the Blues (1972), and Chicago-to-Rome romance Mahogany (1975) – and was shortly to begin filming The Wiz (1978) with fellow Motown-signed artist Michael Jackson. By then, she had three children: three girls under the age of seven.

‘Boston loves Diana Ross’ reads the light-blue T-shirt she wears – with grey slacks and little greasepaint – to warm up for the evening’s show, a run-through at the Boston concert venue, followed by an interview with press. But the blazon could go unnoticed, given the coup de foudre with which this footage begins. A raw piece of reportage, shot by WGBH for Boston’s Ten O’Clock News and housed by the Boston TV News Digital Library, it cants the viewer offhandedly into a transcendental bridge and chorus of Ain’t No Mountain High Enough – one of the most recognisable love songs ever recorded.

Ross may be rehearsing, but it doesn’t watch like a dry run. The singer lets fly with a performance so proud one could believe she caused the clip’s picture to warp within 15 seconds of its starting; as if she bleared the viewer’s vision by the sound of her voice; blew a fuse. The picture restored, we may see as well as hear the keen that, let out, sets her dancing; watch as she flings her arms above her head, making a fist of her free hand, and spins.

The athletic love of which she sings, a triumphal love that was her marque, lent itself, as soundtrack, to the close of Bridget Jones’s Diary; sent the bachelorette, in tiger-print knickers and a cardi, racing after Mark Darcy – snow or no snow.

Differently to the love stories of cinema (a selection of which, including Bridget Jones, will screen as part of the BFI’s LOVE season throughout November and December), the ‘I’ and the ‘you’ of the love song are nonspecific. The love song is a broad church: its first-person pronoun isn’t vested with face or race, nor, concretely, sex and sexuality, and so isn’t delimited – especially not in this era that predates the music video. As such, that ‘I’ permits the listener a purer, flusher identification with infatuated characters than does the romance film. Like Dorothy of The Wiz – who, as Ross reminds the media-men and -women gathered about her feet, is “never described” in the book by L. Frank Baum from which the film was adapted (“You know she’s a girl, that’s all”) – the ‘I’ of the love song is “everybody”. The selves of Ross’s The Boss, Endless Love and Upside Down are ours for the taking, vacant lots.

What is it, then, about live performance that we find it so compelling? Why – if the love song, listened to, is an immanent thing, and so anyone’s?

Now and then, there comes along an artist who so entirely incarnates the love they give expression that they and the themes of their art seem one and the same. Diana Ross is one such artist. Billie Holiday, whom she played on-screen, is another. These entertainers – Holiday synonymous with jazz and blues; Ross synonymous with Motown and disco – became emblems, each of a different kind of love: the agony and the ecstasy. The sentiments of their music are fused with the temperaments of their voices: Ross’s high-climbing, jubilant, clear; Holiday’s deep and fibrous, her tender end-notes downward-sloping as if weighted, or she were beat. Each of their performance-styles exteriorises the feeling in their refrains: Lady Day, singing of sadness, stationed herself – separate and alone – behind her trademark microphone (a Shure 730B), while Ross, as captured here, rollicked euphoric on the stage, kept company by a band, backing singers and, on this night, her daughters, discernible in the background.

It goes for both these female performers: not only does their physical exertion exert itself in their music – leaves its somatic mark, as the effort of breath and lungs is as fingerprint on any vocal – but their identity, too; Billie’s Holiday’s Body and Soul. Some presences are bigger than others, impossible to put out of mind.

It’s this amalgam of personality and the agile ‘I’ of song lyric that makes a great musician great, an icon, as Ross is – and one person present at the Boston rehearsal comments to that effect. Around 4m 40s, sunk into the footage’s ambient sound of background conversation, this unseen onlooker is heard to remark: “She’s not just an artist; she’s a helluva star.”

Some would say it hardly needs saying. But perhaps this man was responding to the strange tension – peculiar to this clip – of Ross’s embodying, in that moment, both her on- and off-stage persona. Sitting on the stairs at the front of the stage (having politely refused a chair), she is a star in civvies: barefoot, knees apart, casual as the next person, and yet possessed of something otherworldly, more than woman, more, for all her insistence, than “a mommy”. In spite of her efforts to descend to the level of the newspersons present, leaning in to better hear their questions, she is aloft, empyreal, an object of idolatry. A mic is thrust out of the darkness, stretched in her direction, the reporter who holds it masked in the shadow cast by her limelight. In the auroral glow of the lights, a spotlight with pink filter, she looks burnished, like a bronze: the face that launched a thousand love songs. A cutaway to coloured lights, pulsing to no music, reminds of the glistering sequins in which we are used to seeing her dressed, but that she does not wear on this occasion.

Over the course of the clip, the camera operator shoots from different angles as if to see Ross from every side; to be sure she’s of three dimensions. But he or she favours the close-up: first in front, later behind so that we see her face in profile, silhouetted blue against black, graphic as album artwork.

That the press’s questions are inaudible has it seem that Ross is delivering a monologue. A quirk it may be, but illustrative, also, of her cosmic, all-consuming stardom, a celebrity that obliterates everything in its orbit. And all the while, Ross talks of ordinary things as raising a family and lessons lately administered to her children like “not [to] use our outside voice inside the airplane”. But love is her theme: familial love; the “pleasure… of performing” (“I love to do what I do”); and the secret to a successful live show that is “that little bit of magic… a lot to do with loving, a lot to do.”

Find out more about the BFI’s LOVE season