Ciro Guerra and Cristina Gallego’s drug-trafficking drama is a fascinating hybrid of genre, anthropology and magical realism, as well as one of the best crime movies of recent years. 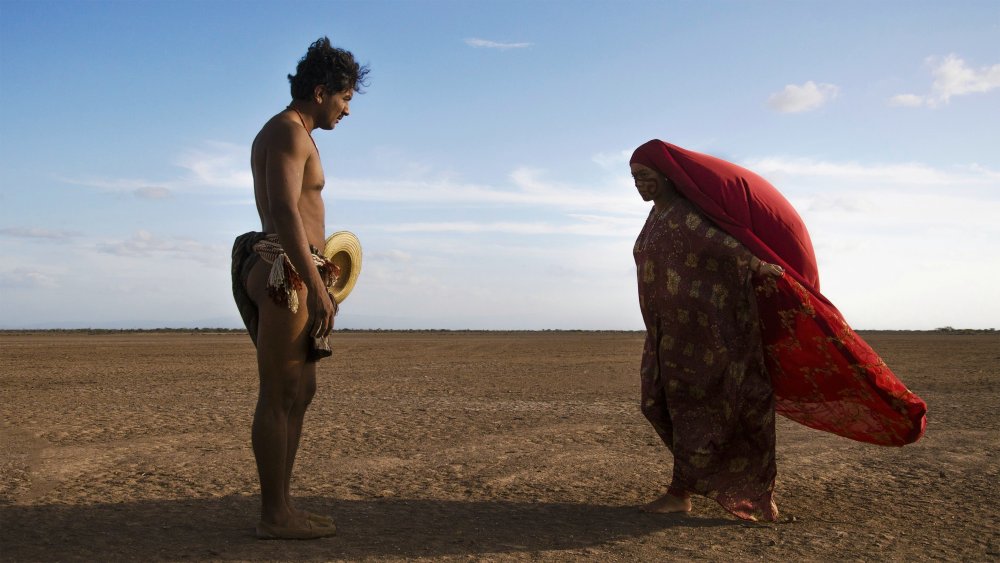 Tales of Colombian narco-trafficking on film or television tend to focus on either the bloody rivalry between the cartels or the so-called war on drugs by the US against the cartels. It’s characteristic of the work of the Colombian director Ciro Guerra and his producer and now co-director Cristina Gallego that they’re concerned with an entirely different dynamic: the impact of the drug trade on their country’s indigenous culture.

Guerra and Gallego are up there with Chilean Pablo Larraín at the forefront of current Latin American trailblazers. Embrace of the Serpent (2015) was the first Colombian film to be nominated for an Oscar. The new film offers one of the most original and intelligent crime movies of recent years; the very idea that Birds of Passage, with its particular sensibility and thematic concerns, can be regarded as a crime movie at all feels radical.

This foray into genre is one of two firsts that the film represents for Guerra, alongside the move of his long-time collaborator behind the camera, beside him, which coincidentally or not corresponds with a stronger female presence at the heart of the film. The result is a fascinating, beautifully detailed if dramatically slightly flawed hybrid of genre, anthropology and magical realism, offering an untold history that predates the West’s self-interested perspective on Colombia’s painful association with drugs.

Rather than cocaine, it’s marijuana; rather than Medellín (heart of Pablo Escobar’s cocaine empire), it’s the Guajira region of northern Colombia, between 1968 and the early 1980s; and rather than rival gangs, it’s warring tribal families. And as with Embrace of the Serpent, it deals with the damaging effect of foreigners on the local people – but with an important, surprising difference. While in the previous film the colonial rubber barons were brutally hands-on, here all the Americans have to do is show up and smilingly express a demand; sadly, the rest is left to the native Colombians themselves. 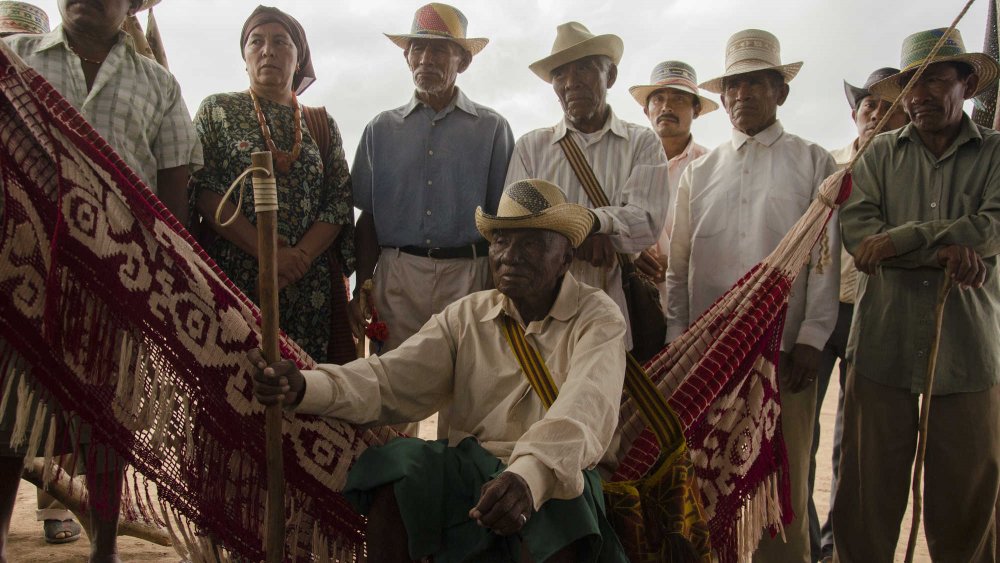 The directors and their scriptwriters pay homage to oral tradition to structure the film, topping and tailing it with a shepherd whose five ‘songs’ (in reality, merely chapter headings) signpost “a story about a wild grass that came as a saviour but destroyed like locusts”. Those feeling the pain are two clans within the Wayuu tribe, one residing in the jungle, the other in the desert.

The film opens in the Pushaina’s desert village, with an ancestral custom that takes the breath away. This is the ritualised courtship of a young woman, Zaida, in a dance that has the competitive edge of rodeo. She is in resplendent red – face paint, dress and a flaming head-dress that catches the wind and seems to allow her to take flight as she leads her suitors full pelt around a circle in the sand. Cameraman David Gallego has to be as agile as the dancers, following Zaida as she drives towards the backtracking youth, then suddenly changing direction. Accompanied by an urgent drumbeat, it’s highly reminiscent of the stirring musical set pieces of Guerra’s 2009 festival hit The Wind Journeys (a fable about a legendary accordion player on the road), and it’s this film’s most enjoyable sequence.

The first wooing boy may fall in a heap, but the older Rapayet, of the Uliana clan, is a different proposition. He keeps his feet, both he and Zaida lose their breath, and love is assured – though her formidable mother Ursula is going to strike a hard bargain. Rapayet’s uncle Peregrino, the tragicomic figure of the piece, can’t stop reminding his nephew: “You should have brought a goat.” In fact, the dowry will be 30 goats, 20 cows, five necklaces and two decorative mules; it’s a pity we never get to see what a decorative mule looks like.

This skilful, extended opening contains primers for what is to come. Zaida’s dream of an old woman walking out to sea will be the first of many that her mother will interpret, usually boding ill. The Wayuu believe that dreams prove the existence of the soul; in Embrace of the Serpent this comfort with the spirit world connects them to the shaman Karamakate, another character whose life is thrown out of kilter by outsiders. It’s here, too, that Ursula declares: “If there’s family, there’s respect. If there’s respect, there’s honour. If there’s the word, there’s peace.” It’s a statement that will prove to be tragically incorrect.

There’s an impressive density and ambition to the film. Guerra and Gallego offer not just one genre but two – as well as crime, there’s an unavoidable dash of western, from the title credit (large red lettering against the pale yellow desert) to the Stetson-and-sunglasses look of the modern-day cowboy and a soundtrack with the twangy strangeness of Morricone. And alongside the clear shards of magical realism reminiscent of Gabriel García Márquez (including portentous appearances by birds and locusts), there is the fatalistic mythmaking of Federico García Lorca.

It could have been a crazy exercise in mix ’n’ match; instead, one is struck by the fertile correspondences between gang war and blood feud. As the bad apple, Ursula’s wayward son Leonidas is a stock figure in both traditions. As a ‘word messenger’, Peregrino is one of the most respected elders of the tribe, an all-round adviser and go-between; in Mafia circles he would be the consigliere. In an echo of Ursula’s earlier pronouncement, he will try to remind Aníbal, the rival clan member whose daughter Leonidas has raped, that “You can’t kill the word messenger.” When Aníbal shoots him anyway, he breaks an ancient tradition – and so opens the doors to the real gangsters, from Medellín.

For his part, Rapayet’s friend and partner Moisés could be just another hot-headed, loudmouthed gangster sidekick. Yet with his Caribbean descent, his status as an alijuna, or outsider (something he shares with the American gringos), he illustrates the tension between the Wayuu and anyone not of their tribe, and so informs the third, more profound war at the heart of the movie.

It’s highly satisfying that the drug trade doesn’t quash quaint old tradition (the Wayuu tribe is still alive and well in Colombia) so much as undermine and divert it. “Weed is the world’s happiness,” declares the happy-golucky Moisés early in the film, to which his friend astutely replies, “Their happiness.”

Having shot the jungle of Embrace of the Serpent in stunning black and white, Gallego now seems to pour colour into the screen. The desert is so vivid that you can almost smell the aridity. At the same time, the nocturnal killing of Moisés has a classic, monochromatic simplicity: white shirt, shadow, a splatter of blood. Other than the courtship dance, Gallego and the directors have most fun – you might call it their ‘Scarface’ moment – with the attack on Rapayet’s isolated mansion, an open invitation that gives new meaning to ‘exposed concrete’.

For all its visual and thematic pleasures, the film does suffer a little from the overfamiliarity of its genre leanings. The tit for tat becomes tiresome. And not many actors have been able to make drug lords interesting or sympathetic enough to justify our concern; Rapayet is too passive a presence and, given his incompetence in keeping his reprobates in check, it’s hard for us to care about his fate.

Then again, the directors don’t seem to either; after all, the Wayuu are a matriarchal society. While Natalia Reyes’s spirited Zaida unfortunately recedes from the fore, Carmiña Martínez’s Ursula is a brilliant creation – proud, authoritative, single-minded, her voice childlike when with her girls, cold as ice with men she can barely tolerate. “I’m capable of anything for my family and my clan,” she warns Rapayet, before she goes too far. He really should have brought her a goat.