Embrace of the Serpent review: a true Amazonian treasure 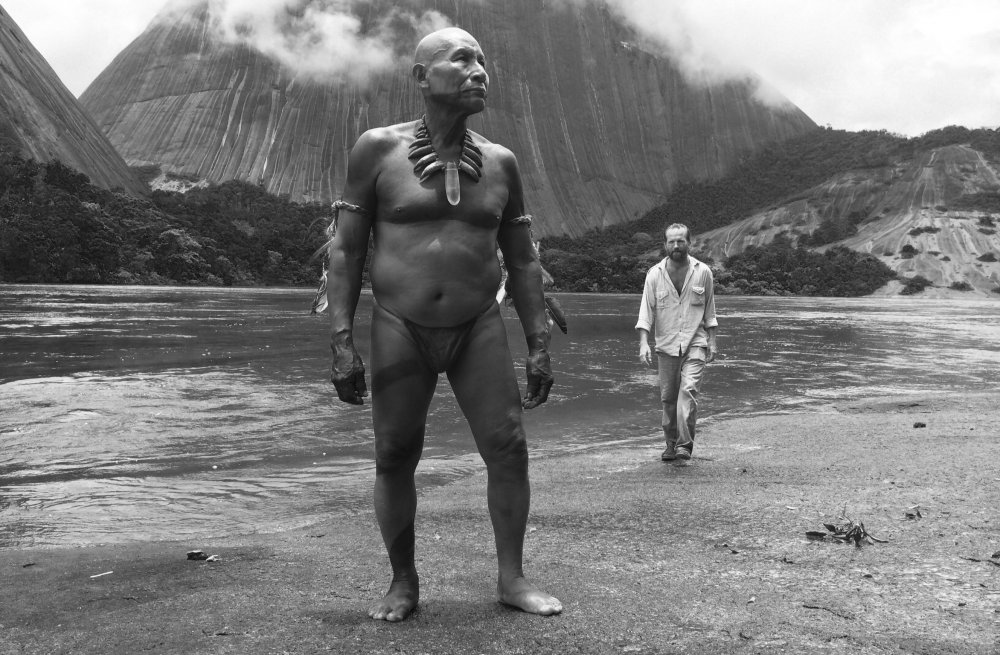 It’s not surprising that Embrace of the Serpent is the first Colombian feature to be nominated for an Oscar. Its director, Ciro Guerra, is a precocious filmmaker who shares the great Latin knack for telling stories that are politically and culturally specific, yet with such flair that they will resonate anywhere. And he’s been steadily building towards this kind of impact.

His first film, The Wandering Shadows (2004), was an unusual, darkly comic and poignant drama about a misfit underclass in modern-day Bogotá; his second, The Wind Journeys (2009), a colourful fable about a legendary accordion player on the road with a boy desperate to imbibe his magic, had sequences that were both cinematic and musical tours de force. And now his third, a near-faultless amalgam of anthropology, character-driven drama and adventure that is visually resplendent, emotive, at times surprisingly witty and deeply mysterious. It’s also a roar of protest against colonialism, told from the perspective of an indigenous protagonist – not cinema’s first such character but one of its most memorable.

The film is inspired by the journals of two real-life explorers, the German ethnologist Theodor Koch-Grünberg and the American botanist Richard Evans Schultes, who explored the north-west Amazon in the first half of the 20th century. Guerra and co-writer Jacques Toulemonde have conjured a fictional knit of their experiences, running two parallel stories 40 years apart, involving two explorers and the shaman, Karamakate, who guides them through an Amazonian heart of darkness.

The themes and tone of Conrad’s novel loom large here, albeit transposed from another continent, as the travellers experience the horrific aftermath of the rubber boom in the jungle. In the first journey, Karamakate, explorer Théo and his local companion Manduca encounter a mutilated man who is clumsily bleeding rubber sap from the trees and begs them to kill him. At a Catholic mission, a priest ministers to “orphans of the rubber war” by denying them their own language and flogging them. And what was once Karamakate’s village now seems caught up in a border war with Peru, its only occupants white men high on the psychedelic yakruna plant.

Forty years later, when Karamakate returns with American botanist Evan, the mission has become the playground of a barking mad self-styled ‘messiah’, who encourages anyone who displeases him to commit suicide. The scene inevitably brings to mind another riverside hell and another madman, Kurtz. But what distinguishes Embrace of the Serpent from both Conrad and Coppola’s Apocalypse Now is its choice of protagonist. The Westerners here merely provide the set-up for film’s actual, refreshing subject: the shaman.

As a young man, Karamakate instructs the boys in the mission, “Don’t let our song fade away”; years later, he believes he’s become a chullachaqui, an empty copy of himself, the last of his tribe, his failing memory removing his sense of tribal identity. So much South American cinema is about identity – not surprisingly, given that the continent’s history is scarred by genocide and the ‘disappeared’ victims of dictatorship. Karamakate’s final attempt to rediscover his own identity feels like a homage to thousands of others before him. 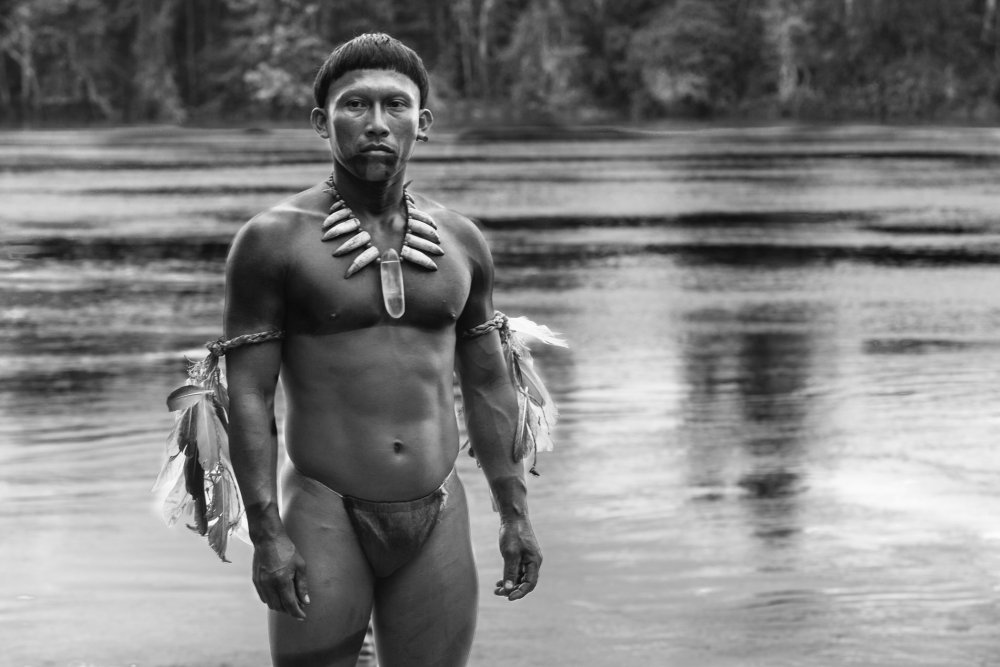 He’s a compelling figure, beautifully acted by the two Amazonian performers. As the younger shaman, Nilbio Torres is a boisterously athletic figure, near-naked frame dominated by striking tribal necklace. He’s proud, angry and belligerent, but with a goofy humour that surfaces as he warms to his travelling companions. In contrast, Antonio Bolívar lends the older Karamakate wisdom and calm, and the humour has become droll. When Evan claims, “I devote my life to plants,” the old man replies, “That’s the most reasonable thing I’ve ever heard a white man say.”

Karamakate’s insistence that Théo and Evan are in effect the same man, a result of the jungle’s temporal magic, is given substance by the editing, which has some masterful transitions between the timelines: Théo’s boat is moving upstream in the darkness when the camera stops following, pauses, then turns as another boat containing Evan and the older shaman moves towards it. It’s a sublime moment, one of many captured by David Gallego’s crisp and sumptuous black-and-white photography, which gives the jungle a sculpted magnificence and makes the river seem a sinuously muscular, living thing.

The film switches to colour for the drug trip that has been beckoning one of these two explorers from the beginning. Its modest depiction is a far cry from the flamboyant Mexican high of Ken Russell’s Altered States (1980) and in keeping with a film that honours the mysteries and majesty of a lost world. 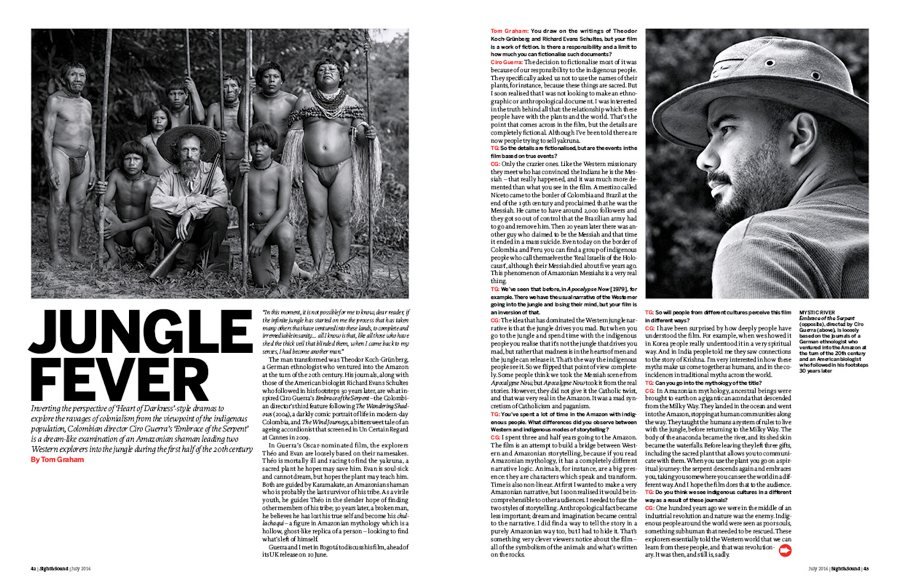 Inverting the perspective of Heart of Darkness-style dramas to explore the ravages of colonialism from the viewpoint of the indigenous population, Colombian director Ciro Guerra’s Embrace of the Serpent is a dream-like examination of an Amazonian shaman leading two Western explorers into the jungle during the first half of the 20th century. By Tom Graham.

Related to Embrace of the Serpent review: a true Amazonian treasure