Stephen King’s dark mirrors: we explore the cinematic mythos of one of cinema’s most prolific and influential horror auteurs. Plus female desire at the movies – a critical rallying cry; Darren Aranofsky discusses his confounding Mother; Yance Ford dissects his wrenching and radical Strong Island; and Hanif Kureishi shines a positive light on Peter Sellers’ Indian characters. 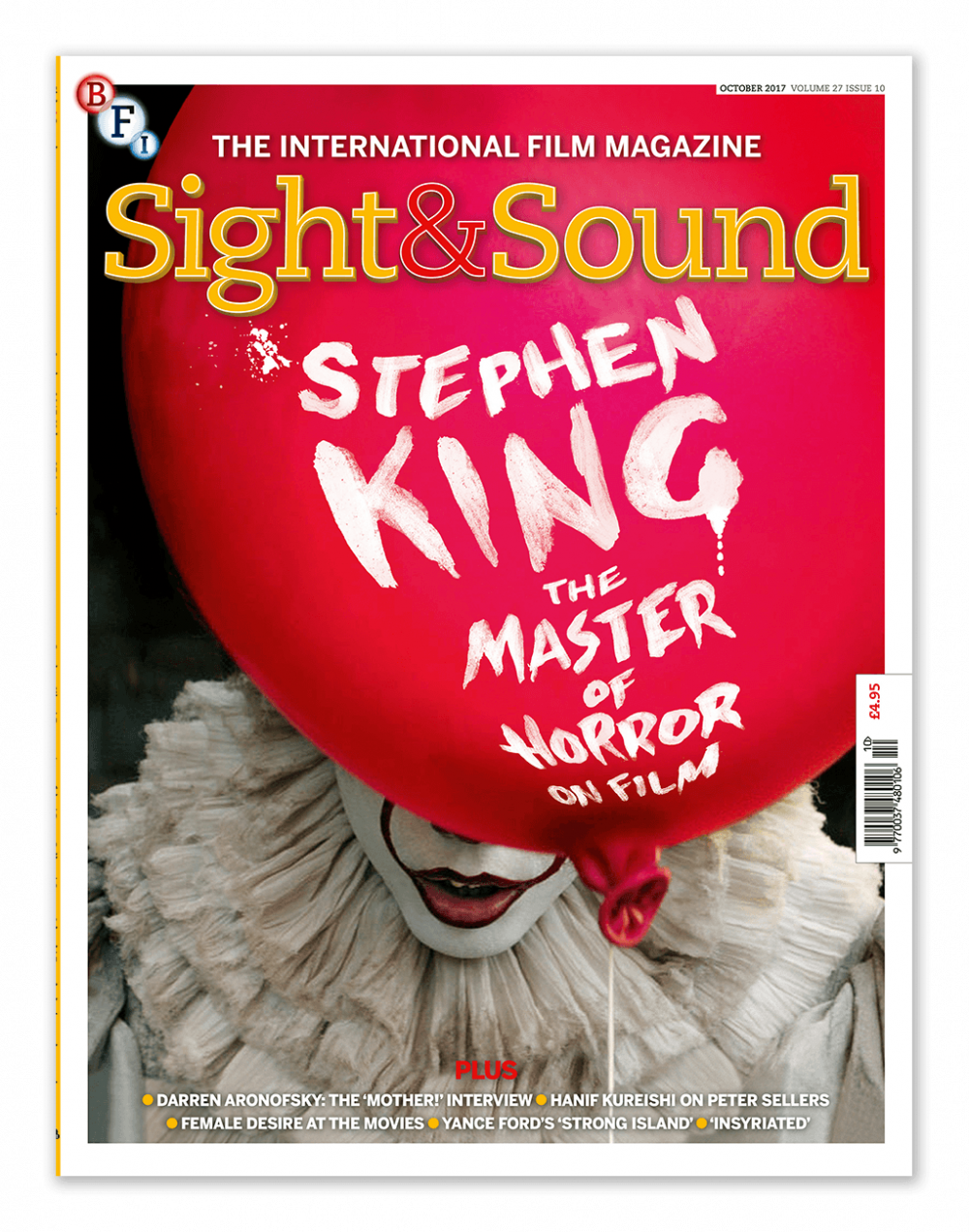 With the passing barely a month apart of George Romero and Tobe Hooper, Stephen King towers larger than ever over the terrain of horror cinema. As the BFI Southbank marks the writer’s 70th birthday with a season of his films, we comb the dizzying array of King’s screenplays and adaptations – from Carrie and The Shining to Children of the Corn, The Dead Zone, Stand By Me, The Shawshank Redemption, The Mist and this year’s Gerald’s Game – for the key to his influence on popular American culture. Roger Luckhurst considers the ways in which King’s art resonates with modern notions of trauma and resilience, while Kelli Weston overlays King’s stories on the classical archetypes of fairytale.

From horror to desire: can female writers learn to loosen their critical corsets and express their own sexual attraction – perhaps taking a lead from new currents in nonfiction literature? “While men and women both get pleasure from looking at beautiful film stars, women really have something to gain by fully expressing that pleasure,” argues Christina Newland. “Real life has enough of those limitations. Women should be given the room to be both analytical and effusive, to hungrily gaze and to contemplate what that hunger means.”

One of this year’s standout documentaries, winner of a Storytelling Grand Jury award at the Sundance Film Festival, Yance Ford’s Strong Island rakes over the traumas and clichés behind family-wrenching murder of the filmmaker’s brother 20 years ago, and the impunity for his killer. As Robert Greene explores how Ford’s “self-aware, penetrating and uniquely crafted documentary performance creates rare pathways for understanding,” Ford details how he designed the film to appeal on two frequencies, both as an affirmation to minority audiences familiar with the experience it articulates and as a provocation to complacent white liberals. 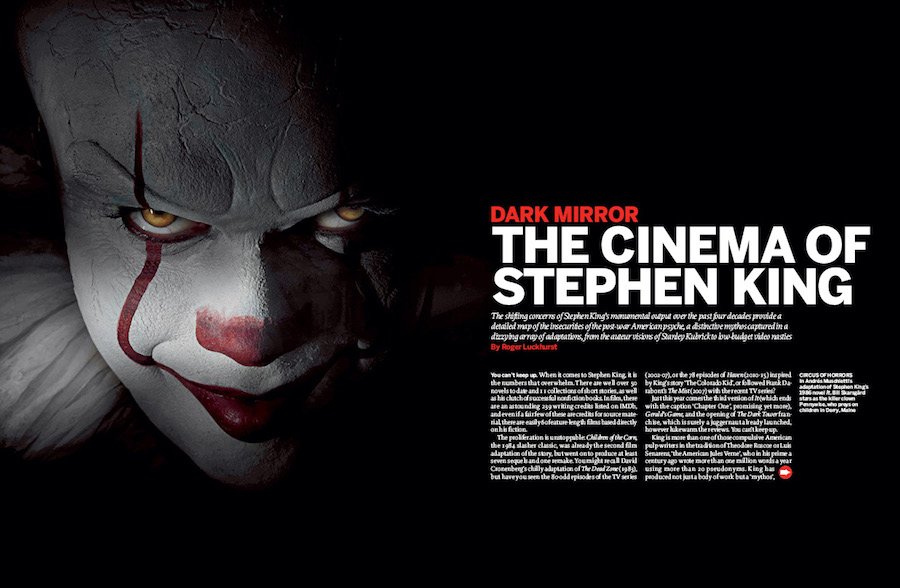 The shifting concerns of Stephen King’s monumental output over the past four decades provide a detailed map of the insecurities of the post-war American psyche, a distinctive mythos captured in a dizzying array of adaptations, from the auteur visions of Stanley Kubrick to low-budget video nasties. By Roger Luckhurst.

+ Tales from the dark side

In his reliance on archetypal characters caught in epic battles between good and evil, Stephen King has made a career of reworking story structures taken directly from the world of fairytales. By Kelli Weston. 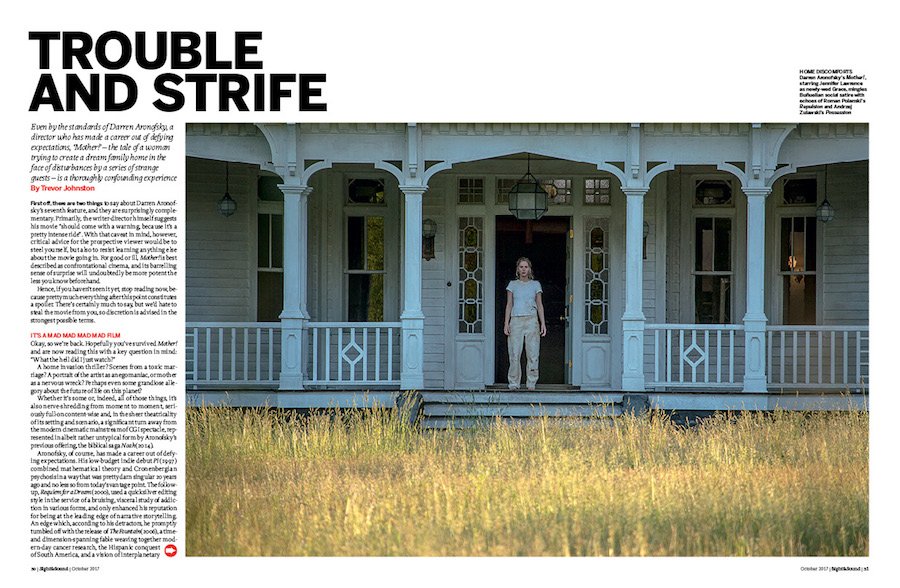 Even by the standards of Darren Aronofsky, a director who has made a career out of defying expectations, Mother! – the tale of a woman trying to create a dream family home in the face of disturbances by a series of strange guests – is a thoroughly confounding experience. By Trevor Johnston. 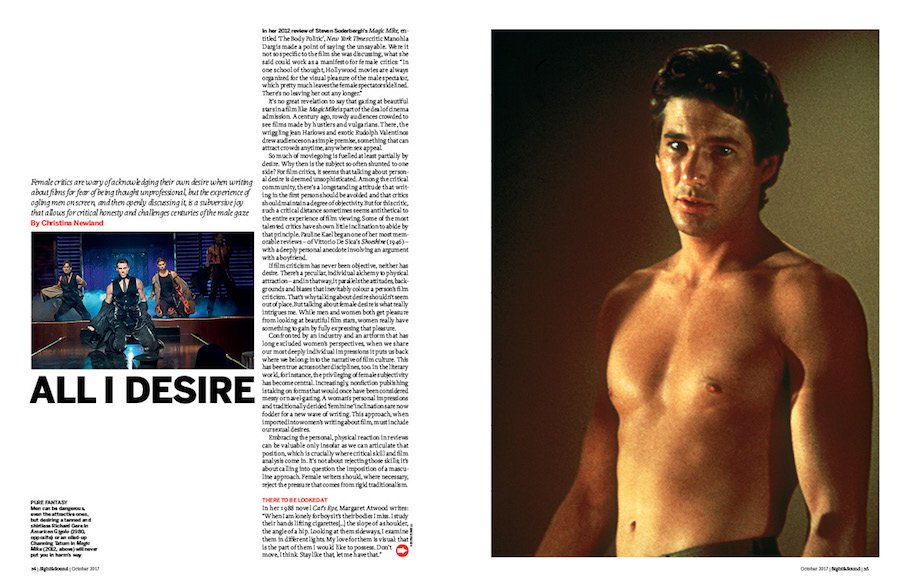 Female critics are wary of acknowledging their own desire when writing about films for fear of being thought unprofessional, but the experience of ogling men on screen, and then openly discussing it, is a subversive joy that allows for critical honesty and challenges centuries of the male gaze. By Christina Newland. 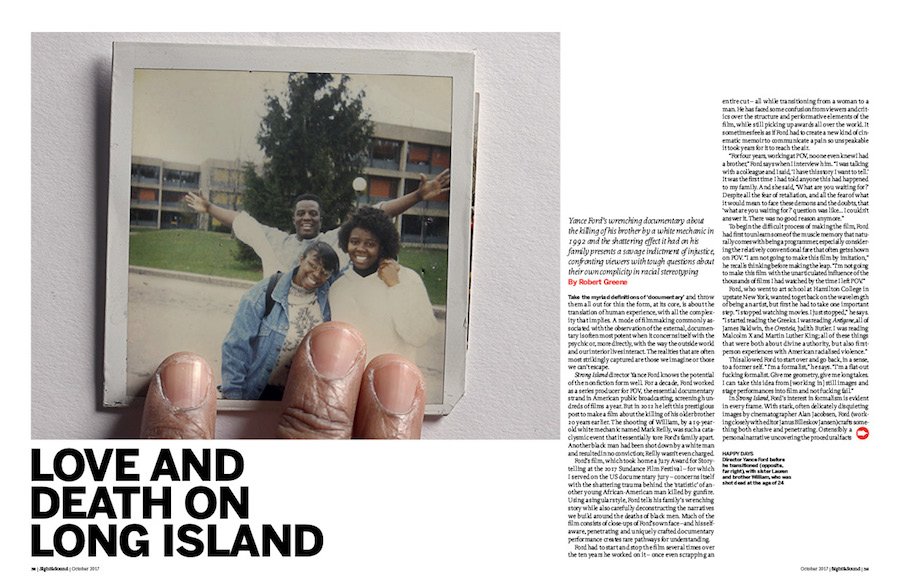 Love and Death on Long Island

Strong Island, Yance Ford’s wrenching documentary about the killing of his brother by a white mechanic in 1992 and the shattering effect it had on his family, presents a savage indictment of injustice, confronting viewers with tough questions about their own complicity in racial stereotyping. By Robert Greene. 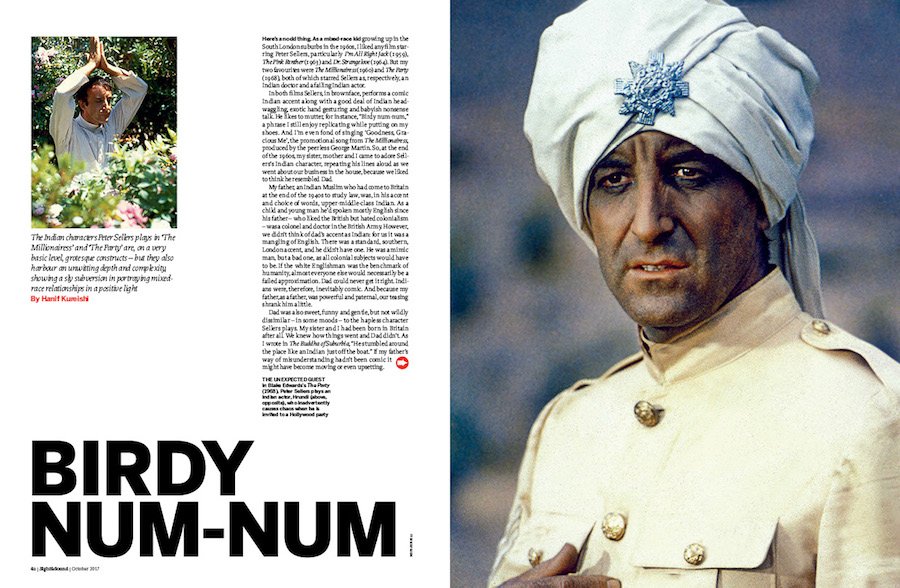 The Indian characters Peter Sellers plays in The Millionairess and The Party are, on a very basic level, grotesque constructs – but they also harbour an unwitting depth and complexity, showing a sly subversion in portraying mixed-race relationships in a positive light. By Hanif Kureishi.

Teens, tech and the future of the moving image/movies 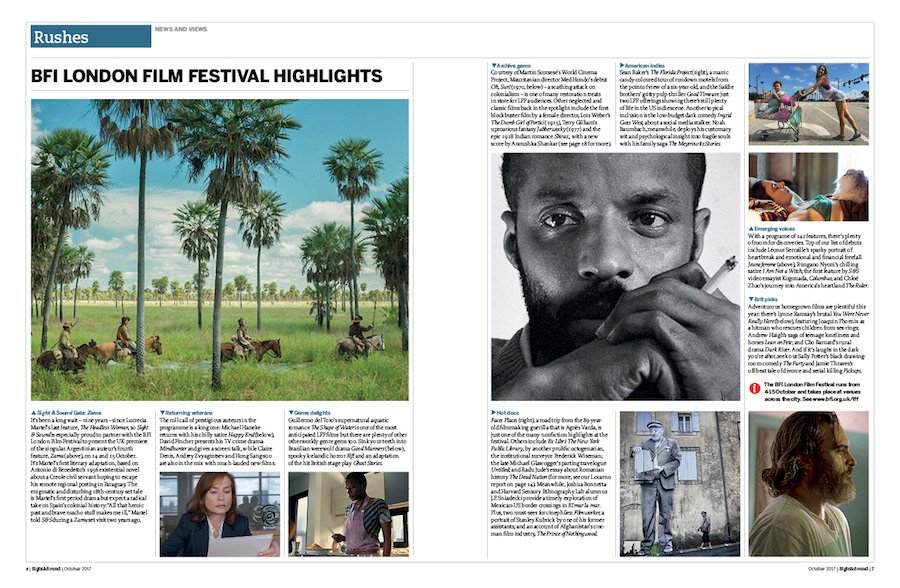 Maysaloun Hamoud’s feature debut In Between shows aspects of Palestinian life within Israel that are both rarely seen and very familiar. By Abbey Bender.

The Big Sick and Girls Trip and US comedies with majority non-white lead roles at the UK box office. By Charles Gant.

Talking Pictures TV offers UK viewers a treasure trove of the kind of classic cinema that was once a staple of the terrestrial schedules. By Andrew Male. 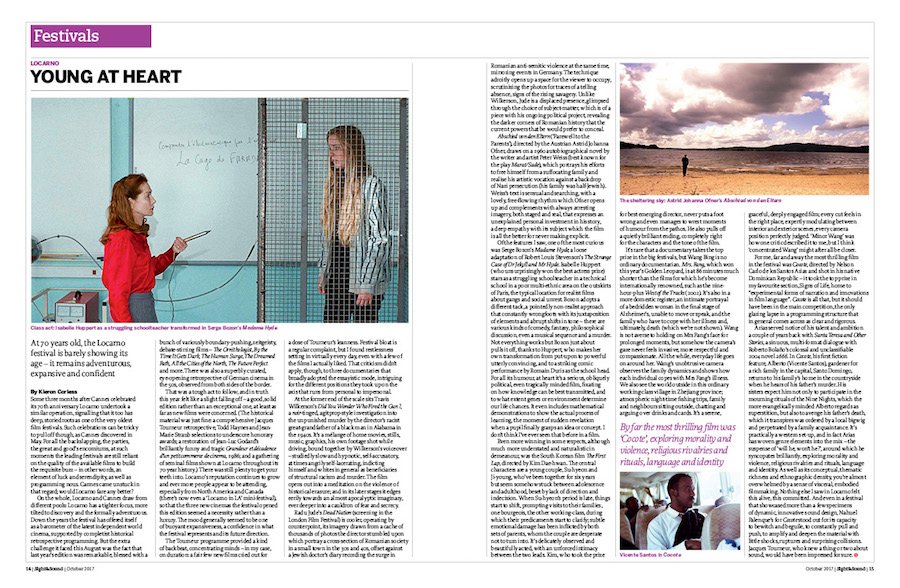 At 70 years old, the Locarno festival is barely showing its age – it remains adventurous, expansive and confident. By Kieron Corless. 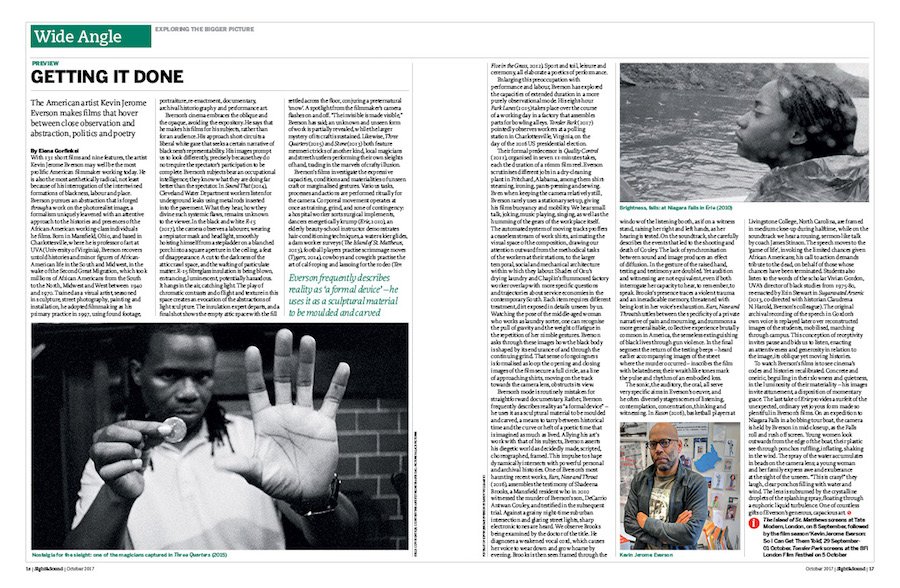 Preview: Getting it done

A new restoration of a silent epic opens a window on Indian filmmaking – and shows that 1928 was a good year for a Shiraz. By Bryony Dixon.

In an age of exploitation, perhaps only exploitation movies can show us what’s happening – only horror movies will reveal the true horror. By Mark Steven.

Insyriated
The Road to Mandalay
The Work 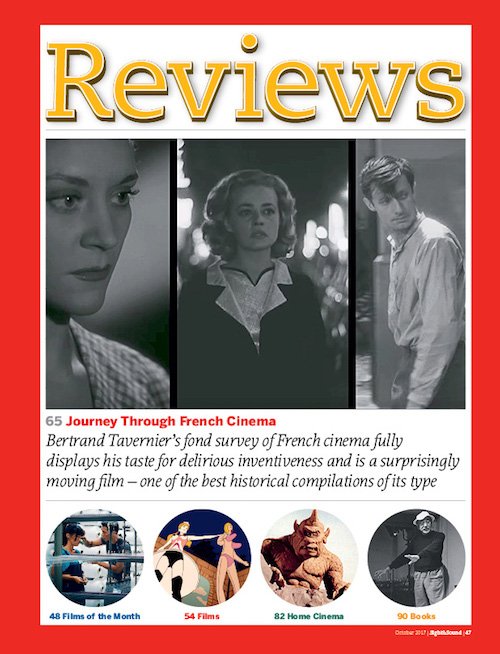 Almost Heaven
Atomic Blonde
Back to Burgundy
Bending the Arc
Brimstone
Bushwick
Daphne
The Dark Tower
The Emoji Movie
The Glass Castle
Home Again
In Between
An Inconvenient Sequel: Truth to Power
In the Last Days of the City
Journey Through French Cinema
Kills on Wheels
The Limehouse Golem
Metamorphoses
The Night Is Short, Walk On Girl
On Body and Soul
On the Road
Primaire
The Reagan Show
Shin Godzilla
Step
Tramontane
The Vault
The Villainess
Wind River
Wolf Warrior II
Zoology 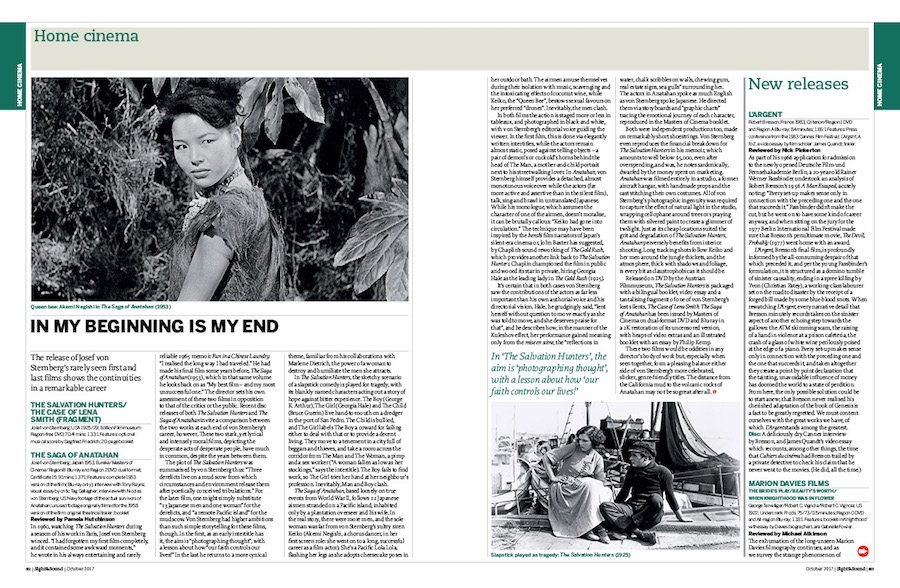 In my beginning is my end: The Salvation Hunters / The Case of Lena Smith (fragment)

+ The Saga of Anatahan

The release of Josef von Sternberg’s rarely seen first and last films shows the continuities in a remarkable career. By Pamela Hutchinson.

Rediscovery: Every Picture Tells a Story: the Art Films of James Scott

In a body of work made about and in collaboration with artists, James Scott hinted at the British New Wave that never was. By Henry K. Miller.

Joel DeMott’s account of the making of a no-budget horror flick is a bitingly funny lost classic of documentary history. By Isabel Stevens.

L’Argent
Marion Davies films: The Bride’s Play / Beauty’s Worth / When Knighthood Was in Flower
The Love of a Woman
The Mourning Forest
Peppermint Soda
Ronin
The Sinbad Trilogy: The 7th Voyage of Sinbad / The Golden Voyage of Sinbad / Sinbad and the Eye of the Tiger
The Tree of Wooden Clogs

Charles Dickens at the BBC 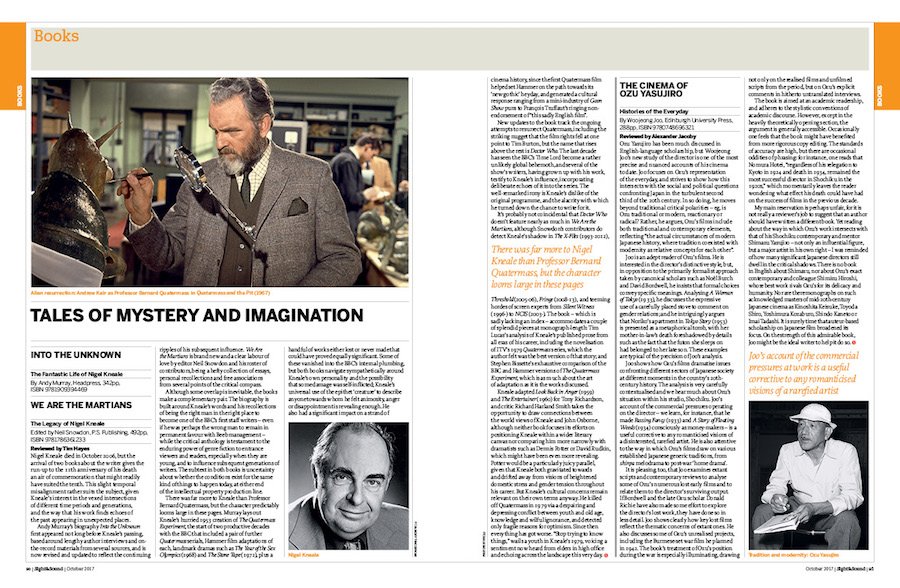 Into the Unknown: The Fantastic Life of Nigel Kneale by Andy Murray (Headpress)

+ We Are the Martians: The Legacy of Nigel Kneale edited by Neil Snowdon (P.S. Publishing) reviewed by Tim Hayes

The Cinema of Ozu Yasujiro: Histories of the Everyday by Woojeong Joo (Edinburgh University Press) reviewed by Alexander Jacoby Cool bande Luc: the comic with-it-ness of Besson’s Valerian and the City of a Thousand Planets