With the ferociously brilliant Texas Chain Saw Massacre, the director created new vistas for horror cinema, and became a catalyst for independent filmmaking in his home state. 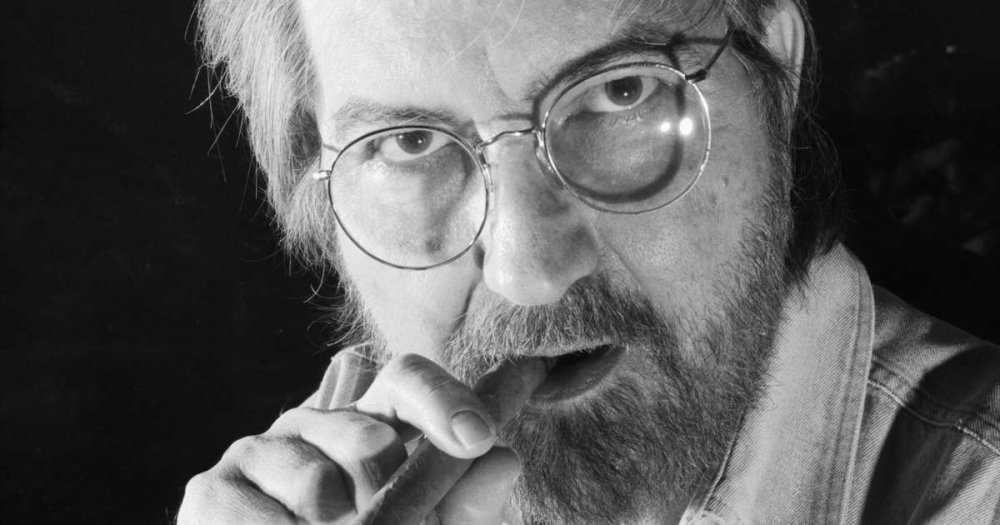 Tobe Hooper, who has died aged 74

If you want to understand Tobe Hooper’s relationship to and impact on the horror genre, you could do worse than watching one of his very finest films, 1981’s The Funhouse. After an opening credits overture of creepy, chattering midway animatronics, we move into a young horror buff’s suburban bedroom, decorated with Halloween masks, posters celebrating the Universal Studios monsters, and rubber spiders. This is just the beginning of Hooper’s piling on of horror clichés: there’s a stalker POV that leads to a buxom young woman in the shower, à la Psycho, resolved as a harmless prank assassination with a rubber knife, and then a lot of business revolving around a visit to a fun fair and a carnival dark ride – all as if to say “Can you believe anyone used to get spooked at this kids’ stuff?”

But then one of the carnies loses his rubber Frankenstein mask to reveal a cleft-palated homicidal abomination beneath, and suddenly the movie loses the tired trappings of the classic horror and becomes a horror film in the Tobe Hooper mould, which is to say an excruciating ordeal, a predator-versus-prey fight for survival that is totally, terribly absorbed in the adrenaline-fuelled, propulsive panic of the moment.

Hooper, who recently died in Los Angeles at age 74, didn’t change the American horror film singlehanded – he credited an encounter with George A. Romero’s 1968 Night of the Living Dead as opening his eyes to the unexplored potentialities of the genre.

But if the homemade, rough-edged Night signified a definitive break with what had come before, Hooper’s 1974 The Texas Chain Saw Massacre was a scorched-earth, burned-bridges piece of work. I am too young to have known the American cinema as it was before The Texas Chain Saw Massacre, and to surmise as to its cultural impact would be sheer guesswork, but when watching the movie, which follows a group of young people waylaid and butchered by a family of cannibals while on their way through central Texas, it does seem that you can still feel the impact of its shocks on a more than merely ‘gotcha’ level. Hollywood censorship csar Joseph I Breen had been dead for less than a decade, and now a consuming terror whose feral ferocity would have been unimaginable not long ago has been unloosed. There is a violence to the filmmaking that transcends bloodletting, and the movie devolves into a merciless and unceasing assault on the senses, filtered through the terrible experience of Marilyn Burns’s archetypal ‘final girl’. It ends with perhaps the most deliriously lurid sunrises in all of cinema, and the sunrise signifies the dawn of a new era of endless, awful possibilities.

Hooper was born in Austin, Texas in 1943, back when the capital was still a mid-sized cowtown with no film industry to speak of, and when nobody had ever heard the names Lee Harvey Oswald or Charles Whitman, the Marine sharpshooter who opened fire from the Main Building tower at the University of Texas, Hooper’s alma mater. Years later Hooper would tell of seeing a police officer shot dead before his eyes by Whitman, and the ambient menace and senseless violence that many felt had crept into Ameican life through the 1960s would eventually find expression in his films.

Hooper’s parents operated a hotel on Congress Avenue, and Tobe misspent his youthful days watching everything that came through the nearby Paramount and State cinemas. He had an early sense of his vocation, studying film at the University of Texas, though his first efforts were somewhat atypical – a trippy little hippie flick, Eggshells (1969), and a documentary about Peter, Paul and Mary, The Song is Love (1970). He finally had his breakthrough with The Texas Chain Saw Massacre, though not without first passing through a production crucible – the film was shot in Williamson County during a blazing Texas summer on a miniscule $60,000 budget, then distributed by a company with alleged links to the Colombo crime family. 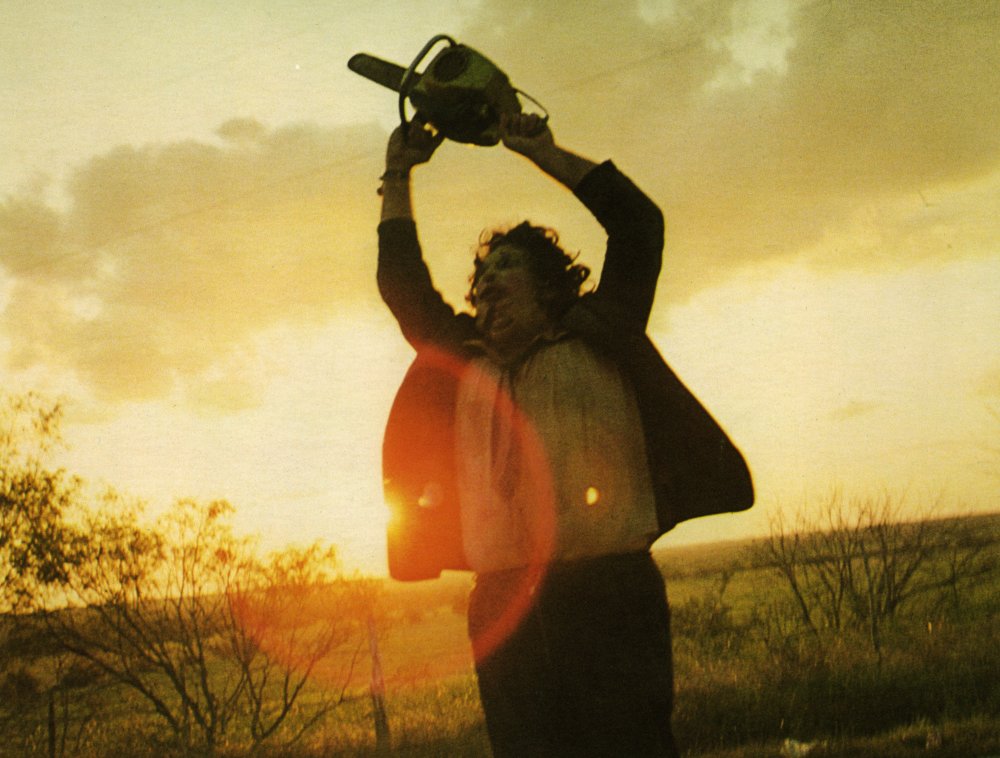 The title The Texas Chain Saw Massacre packs a tabloid punch, but let’s put aside the ‘Chain Saw’ for a moment and focus on the ‘Texas’. While the stated inspiration for Hooper’s sicko classic was the case of Wisconsin body-snatcher Ed Gein and his penchant for ghoulish arts and crafts, there’s nothing Midwestern about the movie that Hooper finally made – it’s as Texas as brisket barbecue. This was truly homegrown stuff, of a sort that was principally being turned out by grindhouse impresarios at the time, and without the examples of Hooper in Texas, or of Romero in Pittsburgh, or of Charles B. Pierce in Arkansas, the story of independent regional filmmaking in America would look very different.

Hooper was hardly the first to shoot a low-budget movie in the Lone Star state – there was self-identified schlockmeister Larry Buchanan, working from his base in Dallas, and Edgar G. Ulmer filmed his ten-day wonder Beyond the Time Barrier (1959) at the Texas Centennial Exhibition Fair Park. Hooper wasn’t the first, but he was the most important. His friend and assistant cameraman, Eagle Pennell, was inspired by what he saw on the set of Texas Chain Saw Massacre to set out to make a movie of his own, the ambling Mutt and Jeff comedy The Whole Shootin’ Match (1978), whose star, Lou Perryman, would go on to have an especially grisly death in Hooper’s The Texas Chainsaw Massacre 2 (1986), before being murdered with an axe in his Austin home in 2009. Texas has never lacked for wild men – but after Hooper showed the way, it became a breeding ground for cineastes, too, and without his example, the Linklaters and the rest are difficult to envisage. As all of Russian literature, to borrow Dostoevsky’s phrase, came from under Gogol’s overcoat, all of Texas cinema was revved up with Hooper’s chain saw.

Hooper’s next film, Eaten Alive (1976), was ripped out of Texas folklore, based loosely on the legend of Elmendorf-based saloonkeeper and serial killer Joe Ball, nicknamed The Alligator Man due to his penchant for feeding victims to the six pet ’gators that he kept on his premises. Neville Brand played Hooper’s Ball surrogate, the actor’s raspy bark one element in the film’s musique concrète concerto of terrified shrieks and clangorous scoring, provided by Hooper and Wayne Bell. It is one of the most grating, oppressive films ever made, a cinematic Metal Machine Music that sets your teeth on edge, and the fullest expression of the assaultive tendency in Hooper’s work. 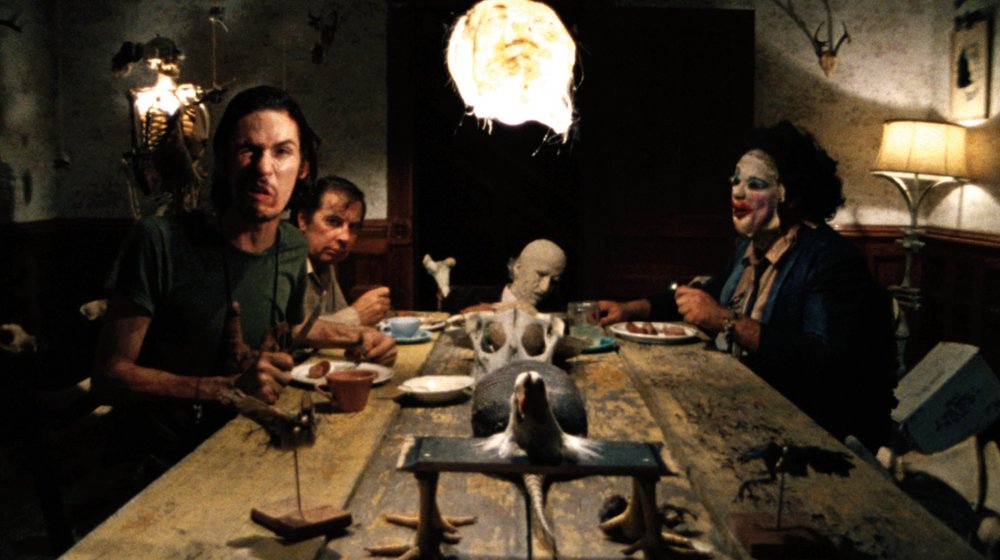 A dysfunctional family in a claustrophobic space: The Texas Chain Saw Massacre (1974)

Between The Texas Chainsaw Massacre, Eaten Alive and The Funhouse, certain Hooper signatures emerge. In each, the rule of the jungle is tantamount: it’s either beat a retreat, or be eaten. His through-the-grinder style lent itself to condensed timelines, and the better part of each of the above films takes place through the course of a single harrowing night. (It should be noted, though, that before the carnage begins, The Funhouse carries itself nicely as a loose, amiable portrait of smalltown teenage time-wasting.)

Beginning with the gristly geegaws filling the Sawyer family home and abattoir in The Texas Chainsaw Massacre, he showed himself a diligent do-it-yourself world-builder, particular interested in the fetid, out-of-the-way spaces created and maintained by dysfunctional individuals or families with lots and lots of time on their hands – the claustrophobic purpose-built Starlight Hotel set in Eaten Alive, or the carnival attraction maintained by the father and son in The Funhouse, whose relationship dynamic is quite close to that between The Texas Chain Saw Massacre’s hulking, tantrum-prone Leatherface and his abusive keepers. Hooper had a knack for envisaging environments as organic outgrowths of diseased minds, and Ridley Scott, less a natural-born filmmaker in every possible regard, credited The Texas Chain Saw Massacre as an inspiration on his own H.R. Giger-designed Alien (1979).

The Funhouse, for Universal, was Hooper’s first studio feature film, made when his stock had been climbing steadily in the years since the immense profitability of The Texas Chain Saw Massacre had put the ol’ Austin shit-kicker on Hollywood’s radar. For Warner Bros Television and ABC he did commendable work on the two-part 1979 miniseries adaptation of Salem’s Lot, based on a novel by Stephen King, then well on his way to household recognition, and followed The Funhouse with Poltergeist (1982), which would be the second legitimate pop cultural phenomenon of his then still-young career. 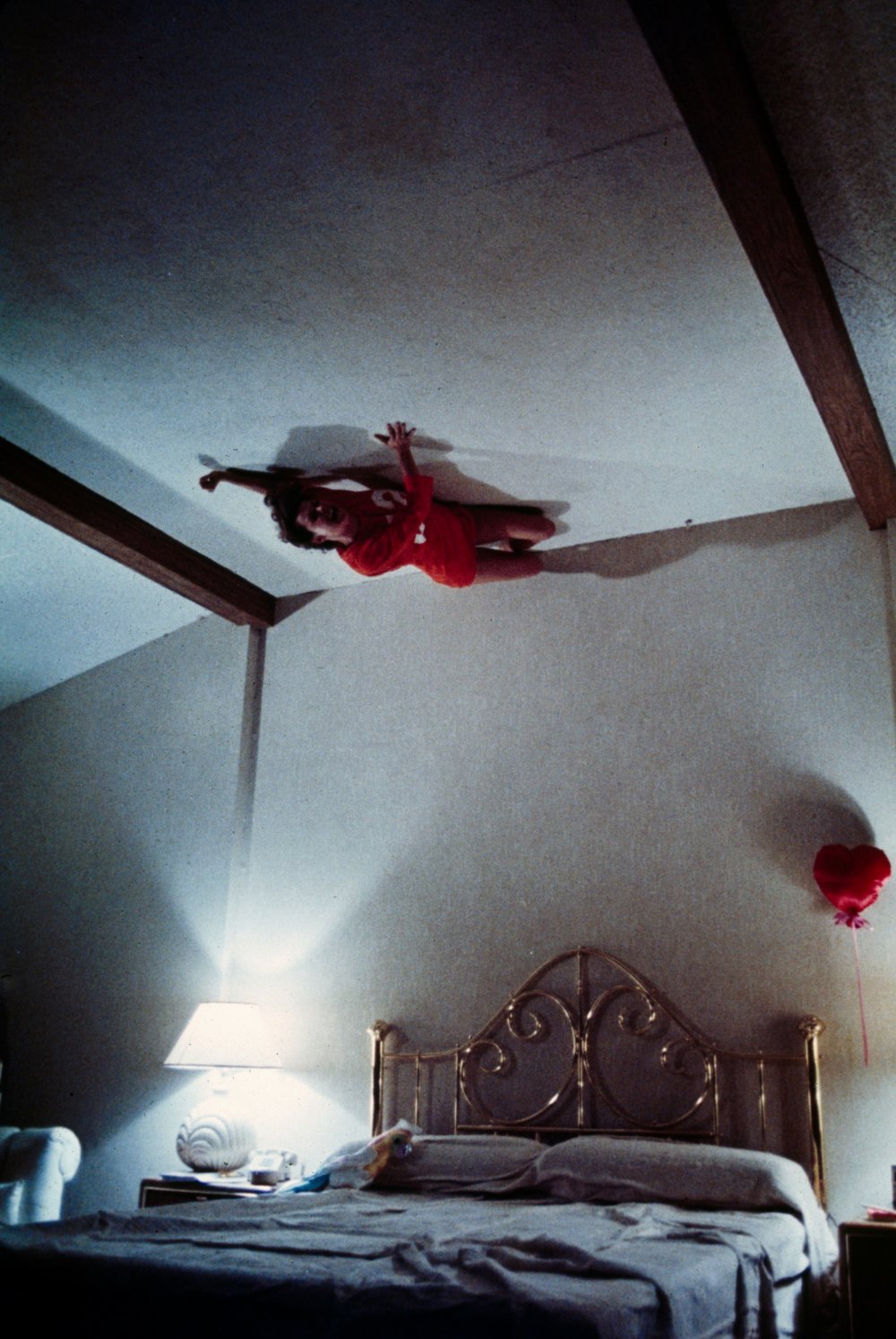 It’s long been something of a nerd parlour game to argue over whether Hooper or his influential producer and co-writer Steven Spielberg was the true author of Poltergeist, but suffice it to say that it’s probably a movie which neither man would have made without the other – the score, suburban setting, and family feeling reads as Spielberg, but the endurance-test pace of the final reel and the prowling, predatory crouch of the camera is pure Hooper.

At any rate, there can be no question of the authorship of the run of eccentic, erratic work that Hooper did immediately afterwards under the auspices of Cannon Films, the production and distribution group run by buccaneer Israeli producers Menahem Golan and Yoram Globus, is in many respects more distinctive. Lifeforce (1985) and Invaders from Mars (1986) were sci-fi efforts undertaken in collaboration with original Alien screenwriter Dan O’Bannon, the former a Colin Wilson adaptation featuring nude space succubus Mathilda May menacing England with, in the memorable phrasing of The Gore Gazette’s Rick Sullivan, “the most mouth-watering breasts this side of Edy Williams,” the latter an alien attack flick after the model(s) of William Cameron Menzies – like Hooper, an art director extraordinaire – distinguished by great Ed ‘Big Daddy’ Roth-inspired creatures courtesy Stan Winston and John Dykstra. 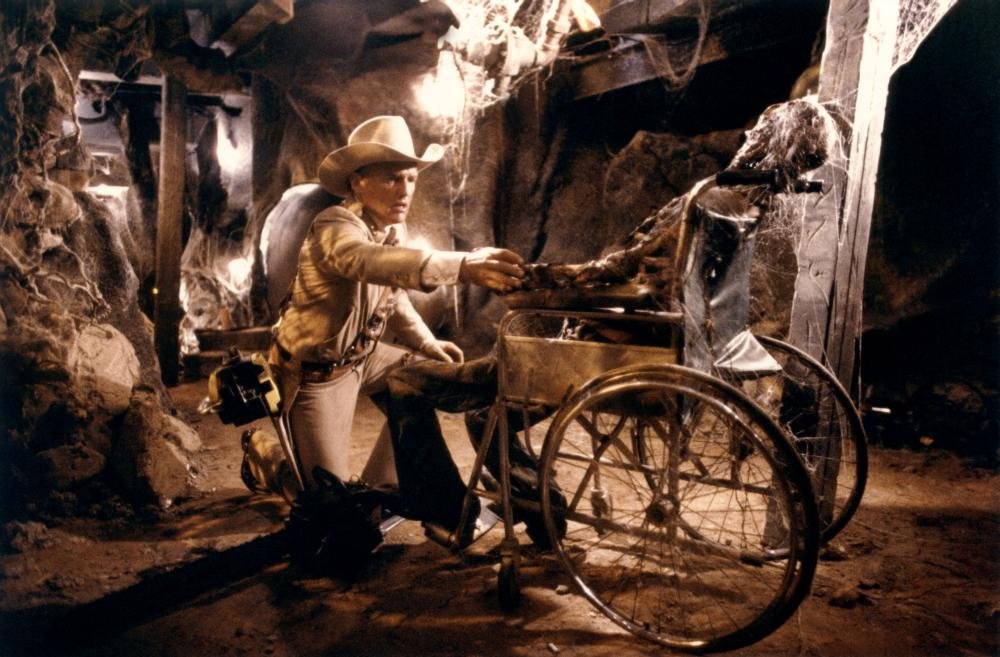 The Cannon-underwritten The Texas Chainsaw Massacre 2 was perhaps Hooper’s last fully realised film – like his old idol Romero, he found the 1990s tough going, often working in less-than-optimal circumstances – but what a film it is, a kind of summing up of the director’s career to date, marrying Leatherface lore to the carnival setting of The Funhouse and the gallows humour and nails-on-a-chalkboard soundscapes of Eaten Alive, the whole affair anchored by an immensely charming central performance from Caroline Williams and supporting turns from Perryman as well as an unhinged Dennis Hopper and Bill Moseley. 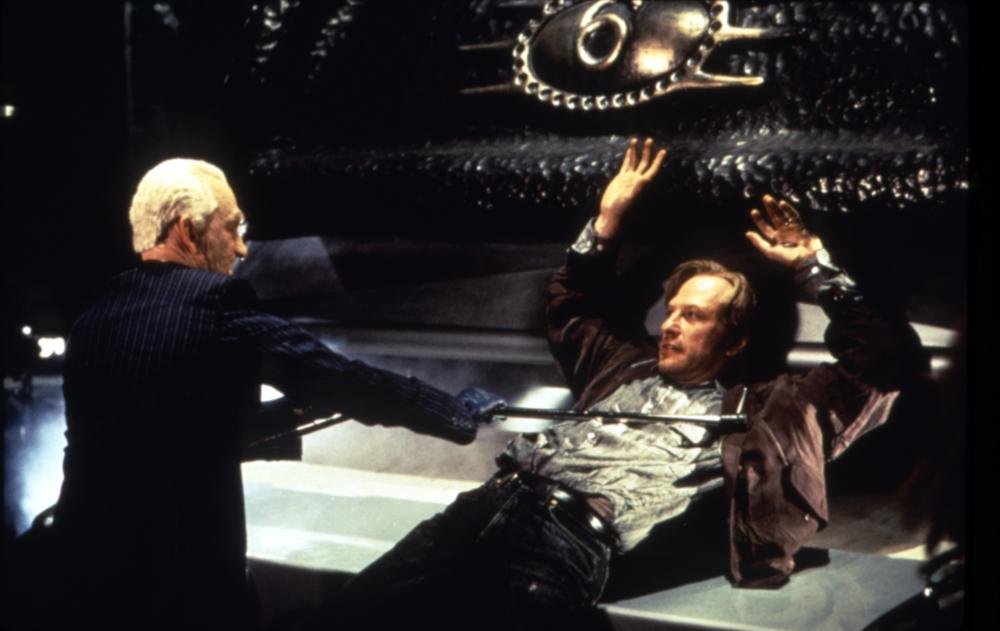 Guignol excess: Robert Englund and Ted Levine in The Mangler (1995)

Even in the long lean years constituting the latter part of his career, through personal and professional vicissitudes not to be dwelt on here, Hooper never wholly lost his pictorial instinct or his relish at guignol excess, and washed down with a couple of beers, a relatively minor effort like 1995’s The Mangler can seem almost profound, a transposition of Dickensian squalor to contemporary Rust Belt Maine that only Hooper could pull off, with Robert Englund as a maimed industrialist, noshing the cluttered scenery. He was gifted with a cartoonist’s punchy graphic sense for the indelible image, and a comic timing that was one part down-home cracker-barrel cornpone cranked up to the level of delirious distortion (“Dog will hunt!”), one part Chuck Jones – think of husky Leatherface’s momentum carrying him skidding past his turn in mid-chase in The Texas Chain Saw Massacre.

The inconsistent quality of even Hooper’s peak output has sometimes confounded his most ardent admirers, but this is concomitant to his volatile tone-mixing method, a dangerous technique which produced films that were awful or great, but rarely indifferent. And when Hooper did reach greatness, which he did more times than all but a few of us can hope for, there were very few better – his was one of the great creative acts of destruction.