A fresh crop of exciting films have arisen at this year’s Cannes, led by Jim Jarmusch’s The Dead Don’t Die. Plus, we bask in the glow of the golden age of Mexican cinema, drop in for Andrew Bujalski’s Support the Girls, and celebrate the legacy of Pauline Kael.

In print and digital from 10 June 2019. Get the digital edition, buy a print edition or . 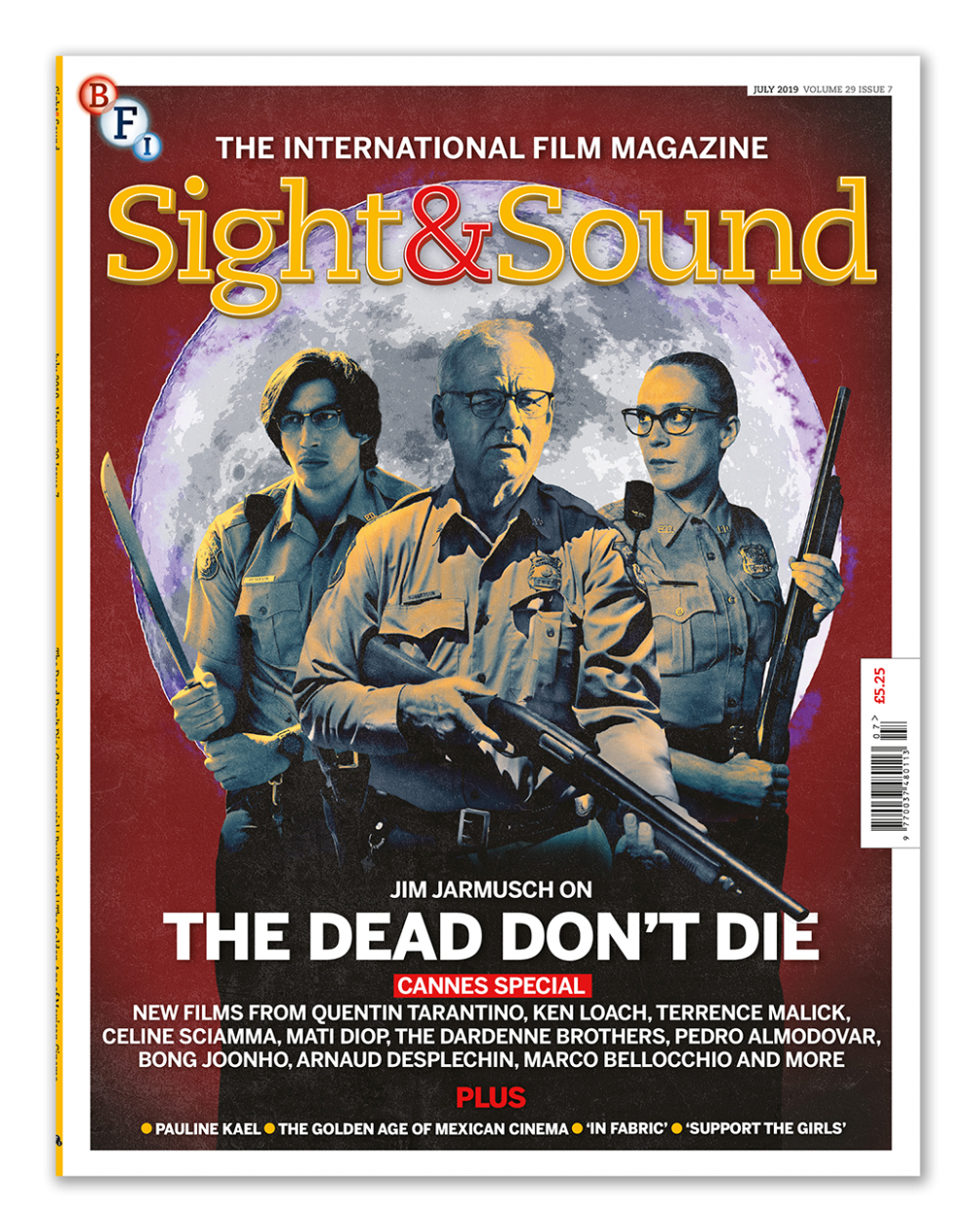 Jim Jarmusch led the genre takeover of this year’s Cannes film festival, which opened with his zom-semble comedy The Dead Don’t Die. While it may seem like a dip into the mainstream for the indie icon, Geoff Andrew maintains that this thoroughly enjoyable film is simply a continuation of Jarmusch’s concern for the walking dead of our society, and talks to him about environmental angst and how to stay hopeful, with the inevitable allusions to life under Trump.

Relentless zombies, neo-cowboys, mind-controlling plants and dour detectives were – surprisingly – a welcome sight at Cannes this year. Nick James found that the shift towards genre cinema on the Croisette coincided with a marked rise in the quality and range of the competing films, and gives an overview of the festival which saw the latest films from Quentin Tarantino, Terrence Malick, Pedro Almodóvar, Céline Sciamma, Ken Loach, Bong Joon-ho, the Dardenne brothers and many more. Meanwhile, Isabel Stevens reports on the exciting films making their mark from the fringes of this year’s festival, which have proved to be just as varied and innovative as the Competition entries – from Robert Eggers’s gothic sea shanty The Lighthouse to the pilgrimage of a plucky severed hand in Critics’ Week Grand Prize-winner I Lost My Body.

This month sees the release of the new film from another mainstay of the American indie scene, Andrew Bujalski. Support the Girls focuses on the friendships and plights of female workers at a Hooters-style restaurant, and may prove to be Bujalski’s long-deserved commercial breakthrough, while staying true to the vulnerability and unconventional dramatic rhythms of his previous works, suggests Jamie Dunn. Here, Bujalski reflects on his oeuvre and his new film’s unexpected relevance, as well as piling praise on his charming leading lady, Regina Hall.

On the centenary on her birth, we take a look back at the career and legacy of the peerless Pauline Kael. Farran Smith Nehme finds inspiration in the enduring insights, controversial witticisms and energetic prose that made Kael one of the most influential critics of the last century. Also featured here are excerpts from a previously unpublished transcript of Kael taking questions from an NFT audience in 1982, in which the same energy felt in her writing shines through. With stark honesty and cool eloquence, Kael recalls what ignited her love of films, challenges the charges of cynicism put against her, and gives her candid opinion on De Palma, Spielberg, Carpenter, Godard and Lynch.

Our latest Deep Focus season dives into the golden age of Mexican cinema, an era in which Mexico became a powerhouse of film production, and where the cinema reflected the fears and aspirations of a country in flux. Chloë Roddick, programmer at the Morelia Film Festival in Mexico, charts the history and films of this fertile period of expression. From the revolutionary spirit in the 1930s, through the influence of noir in the 40s, to the mythic fantasies of the 60s, these films are so vivid and affecting that they helped define the very concept of Mexican identity. Experience them for yourself at the BFI Southbank throughout July.

In our Rushes section, the familiar unease of David Lynch’s surreal moving images spills onto his canvases, with a selection of his artworks on exhibition at HOME Manchester this summer; Charles Gant weighs in on the clash between those titans of arthouse cinema, Picturehouse and Curzon; and to coincide with the rerelease of Don’t Look Now, we talk to its DP Anthony Richmond about his work and his experience working with the likes of Roeg and Godard.

In the Wide Angle section, MoMA film curator Anne Morra wonders why on earth most people have never heard of Stephanie Rothman. A contemporary of Coppola and Scorsese, and trained by Roger Corman, Rothman made exploitation cinema that engaged honestly and empathetically with the struggles of independent women. Though popular with audiences, she was held back by the industry and subsequently ignored by canonising critics, an injustice that is finally being rectified.

Also in Wide Angle this month, Pamela Hutchinson offers on appreciation of Clarence Brown’s The Signal Tower – a silent railroad picture that has been restored and screened at San Francisco Silent Film Festival to much jubilation – and Henry K. Miller looks back at a monumental moviegoing evening in 1934, when London’s Film Society put on a showcase of radical, experimental cinema so significant that it is being recreated this month at the Birkbeck Institute for the Moving Image. 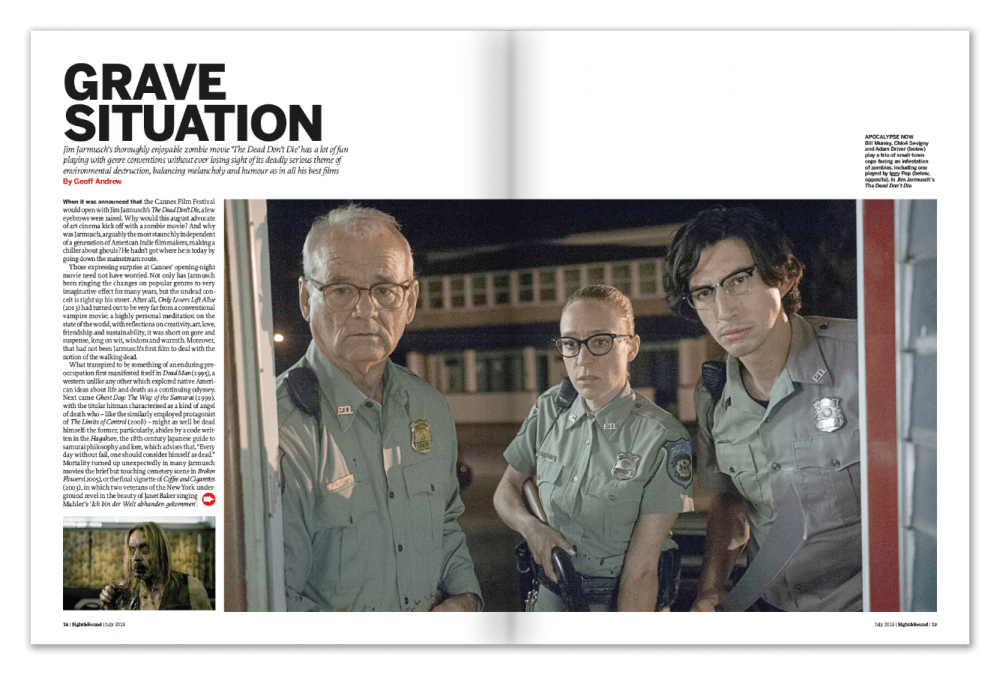 Jim Jarmusch’s thoroughly enjoyable zombie movie The Dead Don’t Die has a lot of fun playing with genre conventions without ever losing sight of its deadly serious theme of environmental destruction, balancing melancholy and humour as in all his best films. By Geoff Andrew. 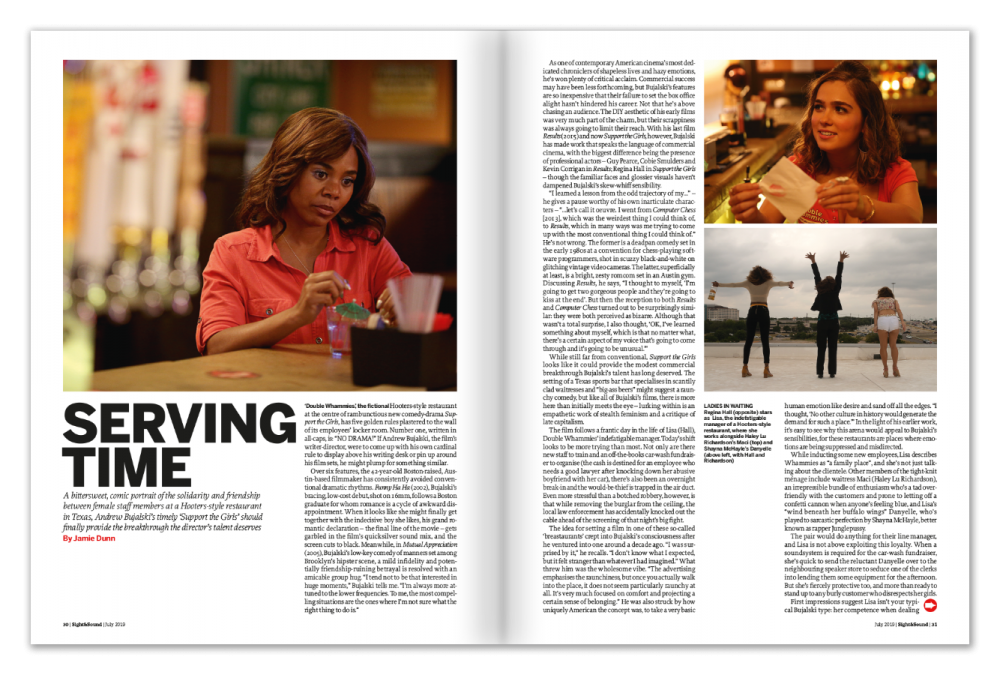 A bittersweet, comic portrait of the solidarity and friendship between female staff members at a Hooters-style restaurant in Texas, Andrew Bujalski’s timely Support the Girls should finally provide the breakthrough the director’s talent deserves By Jamie Dunn. 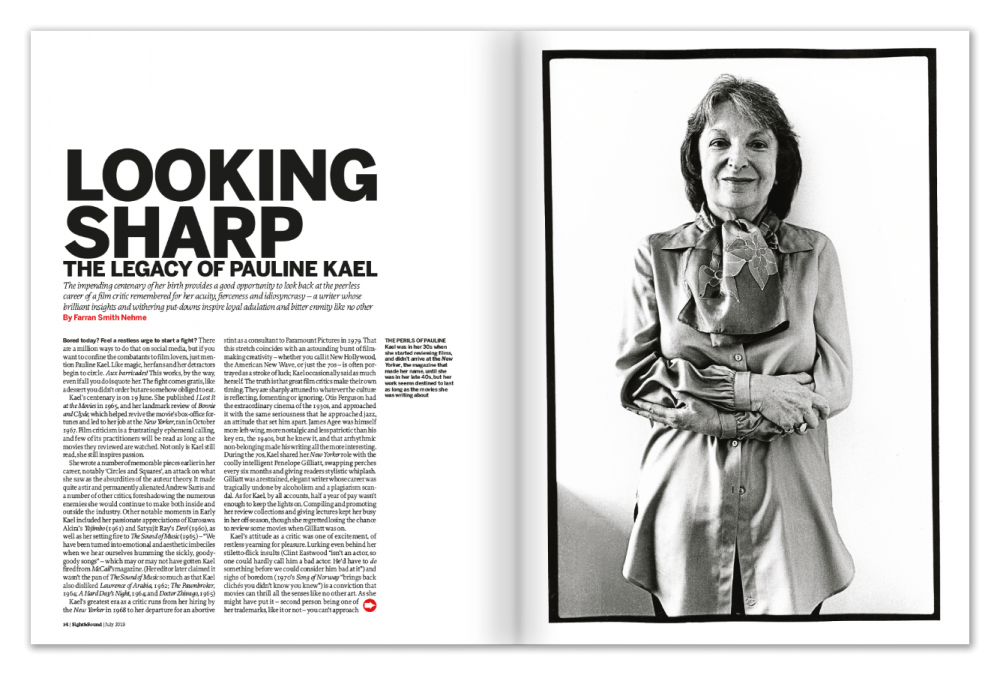 The impending centenary of her birth provides a good opportunity to look back at the peerless career of a film critic remembered for her acuity, fierceness and idiosyncrasy – a writer whose brilliant insights and withering put-downs inspire loyal adulation and bitter enmity like no other By Farran Smith Nehme.

On 25 July 1982, at London’s National Film Theatre, Pauline Kael invited questions from the audience. Here, in an edited selection from a previously unpublished transcript of the event, she explains why good films make her a better writer. 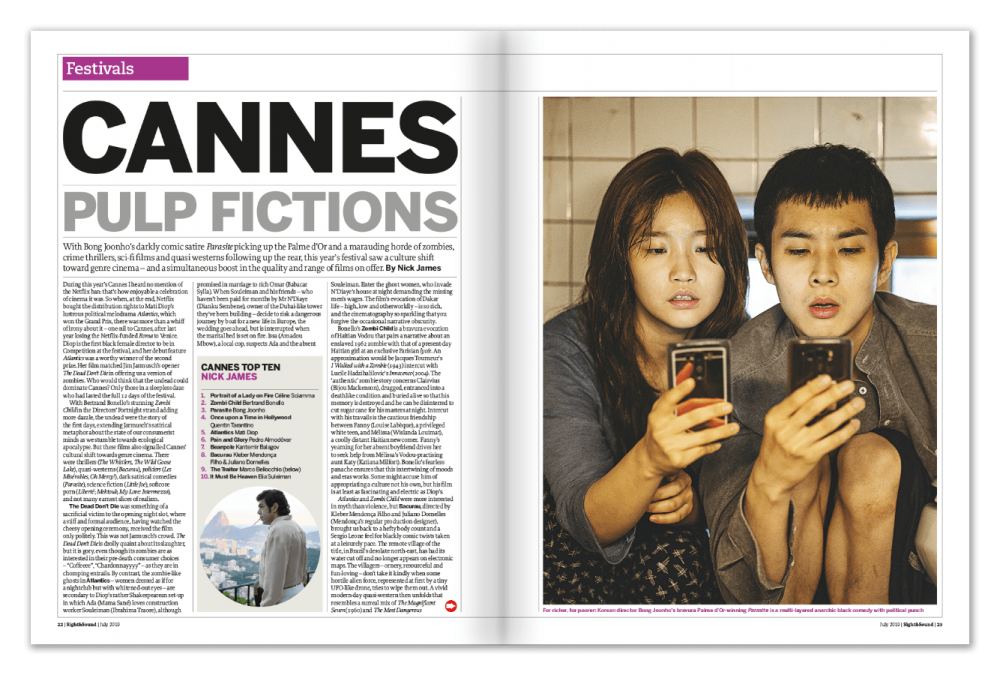 With Bong Joon-ho’s darkly comic satire Parasite picking up the Palme d’Or and a marauding horde of zombies, crime thrillers, sci-fi films and quasi westerns following up the rear, this year’s festival saw a culture shift toward genre cinema – and a simultaneous boost in the quality and range of films on offer. By Nick James.

+ Daring buds of May

Alongside the Competition entries, this year’s Cannes had plenty of exciting, innovative filmmaking on offer from newer, less starry names. By Isabel Stevens. 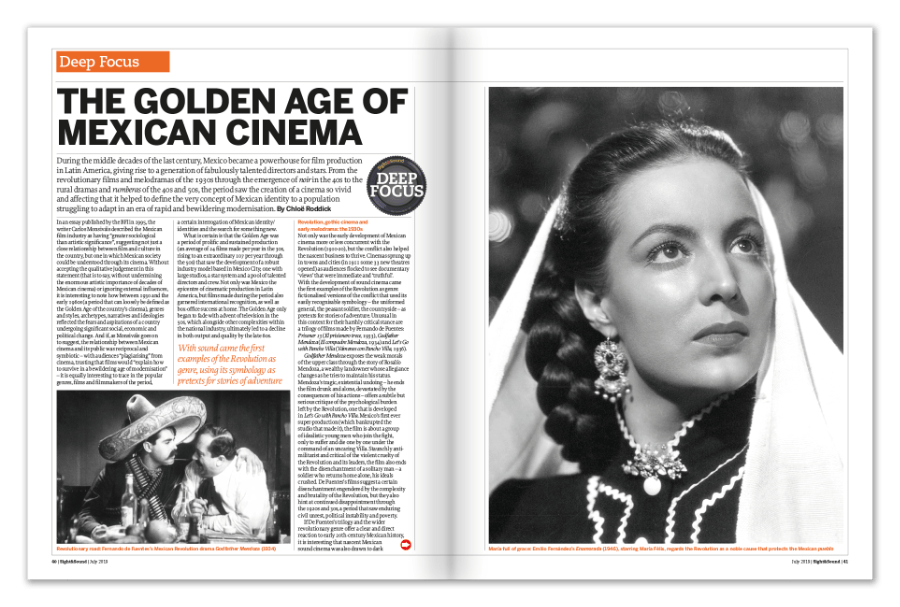 The Golden Age of Mexican Cinema

During the middle decades of the last century, Mexico became a powerhouse for film production in Latin America, giving rise to a generation of fabulously talented directors and stars. From the revolutionary films and melodramas of the 1930s through the emergence of noir in the 40s to the rural dramas and rumberas of the 40s and 50s, the period saw the creation of a cinema so vivid and affecting that it helped to define the very concept of Mexican identity to a population struggling to adapt in an era of rapid and bewildering modernisation. By Chloë Roddick. 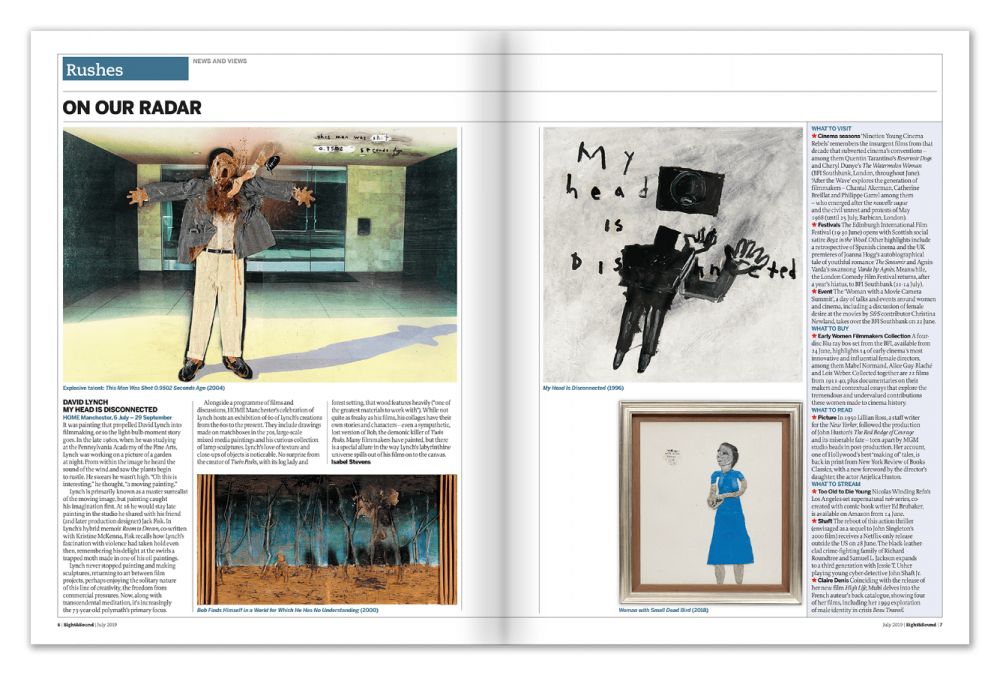 A haunting exhibtion of David Lynch’s artwork at HOME Manchester, plus what to visit, buy, read and stream.

On the eve of a new 4K release of Don’t Look Now, DP Anthony Richmond remembers working alongside Roeg and Godard. By Trevor Johnston.

Rafiki director Wanuri Kahiu recalls the magical thrill of a family visit to the drive-in as a young girl in Kenya in the early 1990s.

The numbers: Woman at War, activist dramas and Picturehouse vs Curzon

A quirky tale about an unlikely environmental activist has proved a small-scale hit for Picturehouse as it looks to boost its acquisition of titles. By Charles Gant. 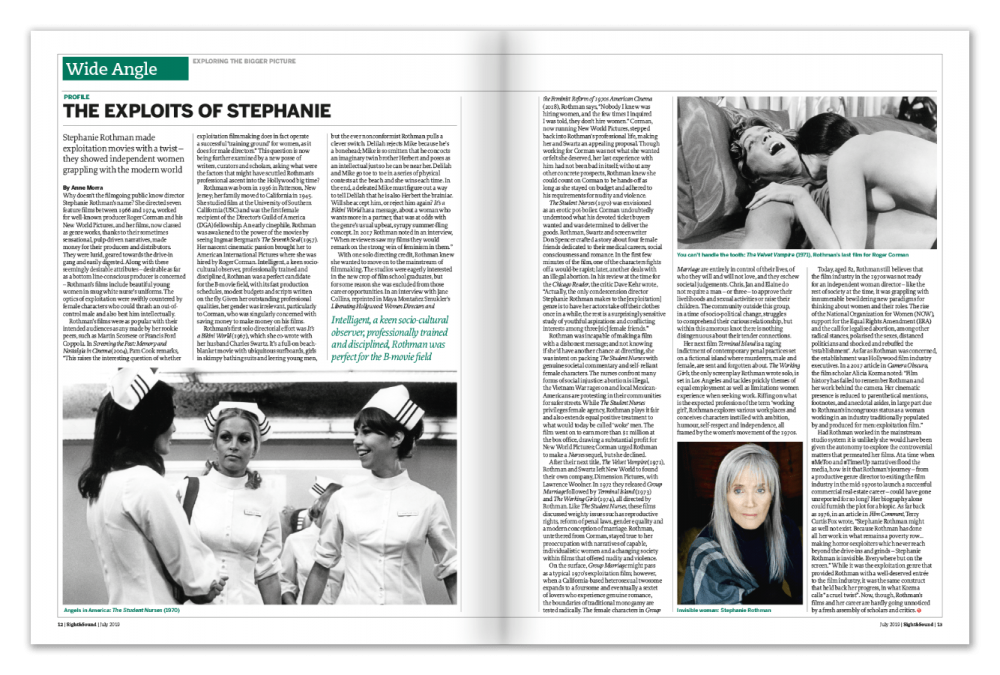 The exploits of Stephanie

Stephanie Rothman made exploitation movies with a twist – they showed independent women grappling with the modern world. By Anne Morra.

Blood on the tracks

Before he directed Garbo in her great roles, Clarence Brown was making tender, thrilling dramas, as a new restoration demonstrates. By Pamela Hutchinson.

A night to remember

An evening at London’s Film Society in 1934 was a showcase for radical experiments, and for a film culture that valued radicalism. By Henry K. Miller. 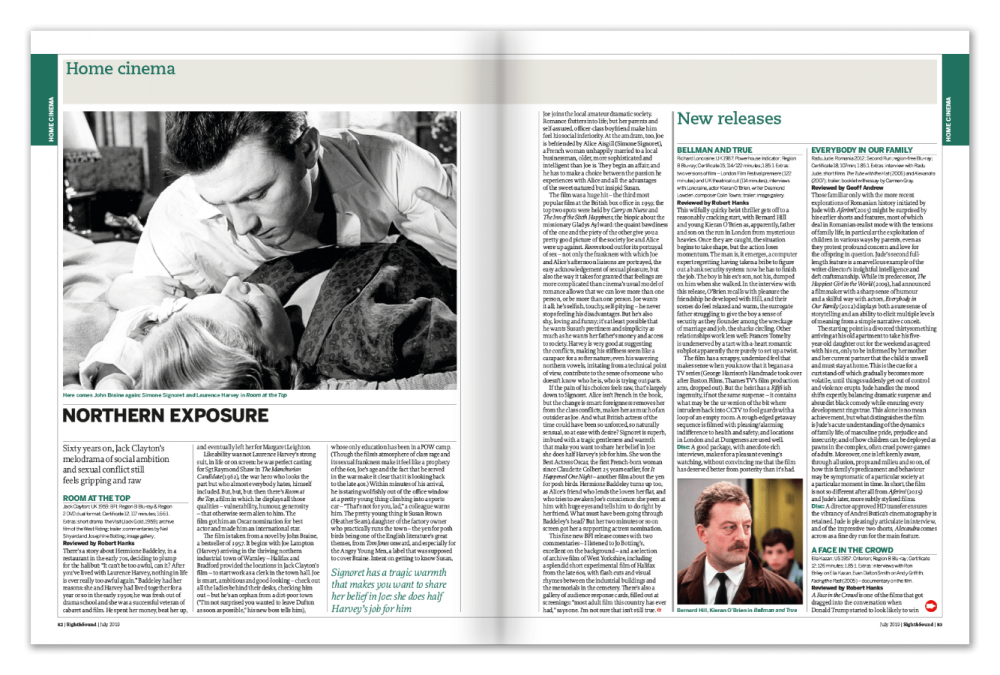 Northern exposure: Room at the Top

A spiffy new edition of a classic noir thriller offers a reminder of a director whose career deserves a lot more attention than it’s had so far. Reviewed by Tony Rayns.

13 episodes from a talented set of directors, including The Leather Funnel, which is jazzed up into a messy witch story, but a mess that gives you Christopher Lee, Simon Ward, Jane Seymour, and fabulous satanic library music. By Robert Hanks.

Giorgi Shengelaia’s biopic is a stunning portrait of an isolated, unhappy man who is yet attuned to the world’s beauty. By Erica Eisen.

Bellman and True
Everybody in Our Family
A Face in the Crowd
The Heiress
The Holy Mountain
How I Won the War
The Landlord
The Last Warning
Nightfall
No Orchids for Miss Blandish
One, Two, Three
Track 29
Under Fire 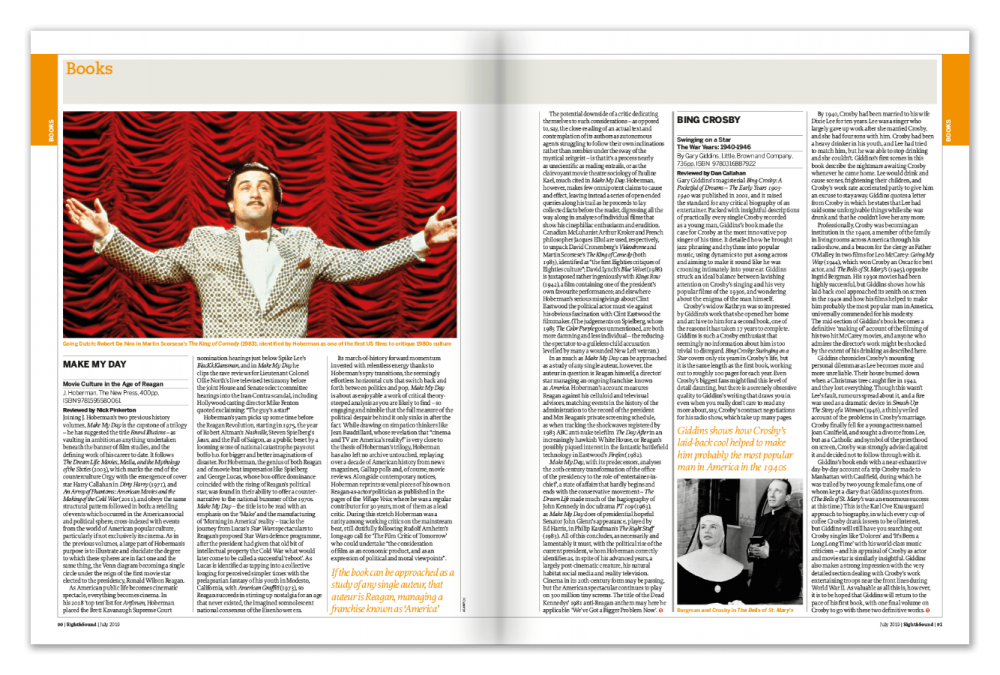 Movie Culture in the Age of Reagan by J. Hoberman (The New Press) reviewed by Nick Pinkerton

Swinging on a Star – The War Years 1940-1946 by Gary Giddins (Little, Brown and Company) reviewed by Dan Callahan

What Happened to Women in the Silent Film Industries? by Jane M. Gaines (University of Illinois Press) reviewed by Pamela Hutchinson

Liberating the boundaries of what we call ‘film’

Bravo for Border, but the original short story deserves consideration The final moments of Robert Hamer’s jet-black comedy bring its antihero down to earth – and place Dennis Price among the stars. By Andrew Roberts.