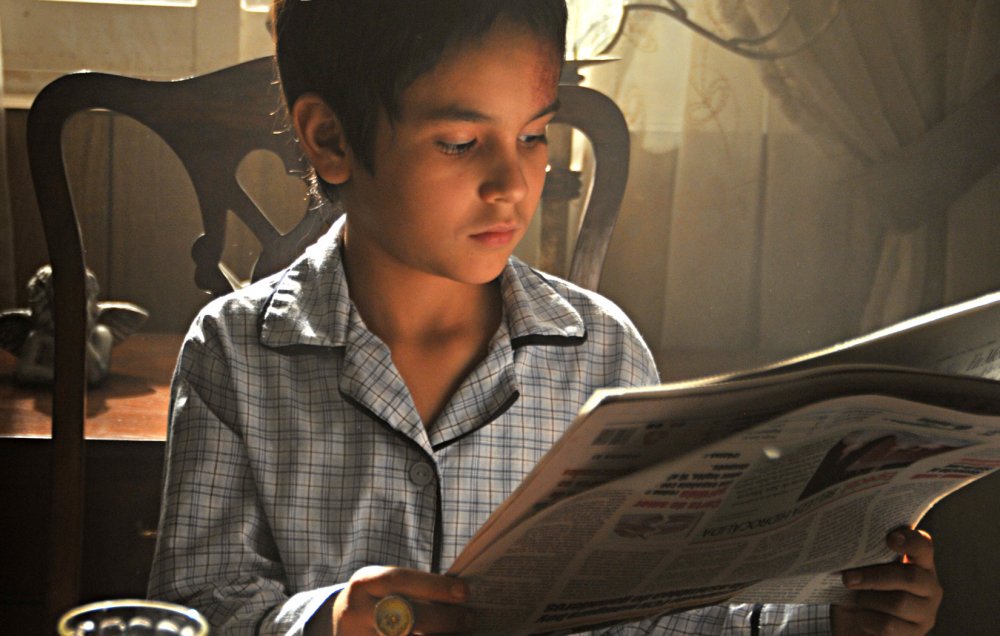 Diego Luna rose to fame on the back of his performance as an excitable teen in Alfonso Cuarón’s Y Tu Mamá También. I’m reminded of this as I meet Luna, whose boyish charm belies his reputation as a veteran actor of the Mexican New Wave. He has just presented Abel (his second directorial feature) at the London Film Festival, and is visibly buoyed by the warm reception that it received. When I explain that I’ll be interviewing him as the winner of the BFI’s Young Journalism Competition, he reacts with more enthusiasm than I deserve: “Cool! That’s cool!” But once we’ve left the press buzz behind and retired to a private lounge, he tones down the gaiety and answers my questions in earnest.

Luna’s latest film tells the story of nine-year-old Abel (Christopher Ruíz-Esparza), who returns home after a two-year stay in a psychiatric hospital. At first he refuses to talk, instead remaining as introverted as he was in hospital. Yet his presence upsets the family dynamic, which is already unbalanced by the conspicuous absence of a father: Abel’s elder sister (Geraldine Alejandra) has little patience for his eccentricities, and his mother (Karina Gidi) is hurt by his aloofness.

Then Abel suddenly begins to speak again, and simultaneously adopts an authoritative adult persona in an apparent attempt to replace his father. He orders his siblings around and pretends to smoke, and the family tolerate his behaviour until the real father (José María Yazpik) returns without warning. Tensions arise as the boy’s patriarchal persona is repeatedly tested against reality. Abel argues with his father, refusing to accept him for who he is; he visits the industrial depot – the realm of the adult male labourer – but flees in terror at the sight of heavy machinery; and finally, he tries to swim across a pool and almost drowns. In the closing shot, we see him back in hospital, sucking obediently on a lollipop: a child again.

If the initial stages of Abel’s adult posturing give the film its funniest moments, then the disintegration of his persona provides the tragedy. Luna handles the change in tone deftly.

Alex Dudok de Wit: The film alternates between drama and comedy. How did you ensure that you would strike the right balance between the two?

Diego Luna: That happened during editing. The original cut had far more comedy, especially in the final act. The very idea of a kid pretending to be an adult is funny, so it was important not to forget that the film is also about the mother, who’s enduring a very painful experience. Whenever Abel does something funny, I made sure to cut to the mother afterwards.

Christopher has rightly been praised for his performance as Abel, but the whole cast was superb. Are they all established actors in Mexico?

I chose non-actors for the children; but for the adults, I needed not only the best actors, but also those with whom I shared a perspective on what acting is. I connect much more with theatre actors than with cinema actors – insofar as you can speak of “cinema actors” in Mexico, because there isn’t a big film industry.

Karina Gidi had only been in one film before, and it had bombed… but I saw her and José María perform together in a stage adaptation of Festen, and it was as I watched them rehearse for that play that I realised what a great couple they made. I knew they had to play the parents in Abel.

Whereas you decided to cast the two child parts by running a workshop that taught acting to local children. What qualities were you looking for in the actor that would play Abel?

I needed someone that enjoyed performing, pretending. The character of Abel changes so much throughout the film – he goes from being completely introverted, to becoming this commanding father figure, then back to his insecurities. There was no way that I could logically explain [this narrative arc] to a kid, so each stage of Abel’s character development I described to Christopher in terms of a different kind of person. I’d say, “act like that really strict teacher you hate”, and we’d develop that character. The next day, we’d introduce someone else. And so we built all these disparate personas, and it was my job to connect them together.

The situation in Abel’s household is almost surreal. Did you ever worry that the audience wouldn’t find it credible?

I did, until the first screening. We’re stretching reality… but I think the fact that it’s a kid living in a kid’s world makes it easier to accept. Is he mentally unsound, or does he just have a very vivid imagination?

The film is theatrical – from one moment to the next, Abel is transformed from mute kid into the father of the family, and the audience has to buy that. Yet it’s that moment in the story that drew me to the script in the first place, and so [whenever I was in doubt] I’d just remember that if it had made sense to me, it would make sense to others. 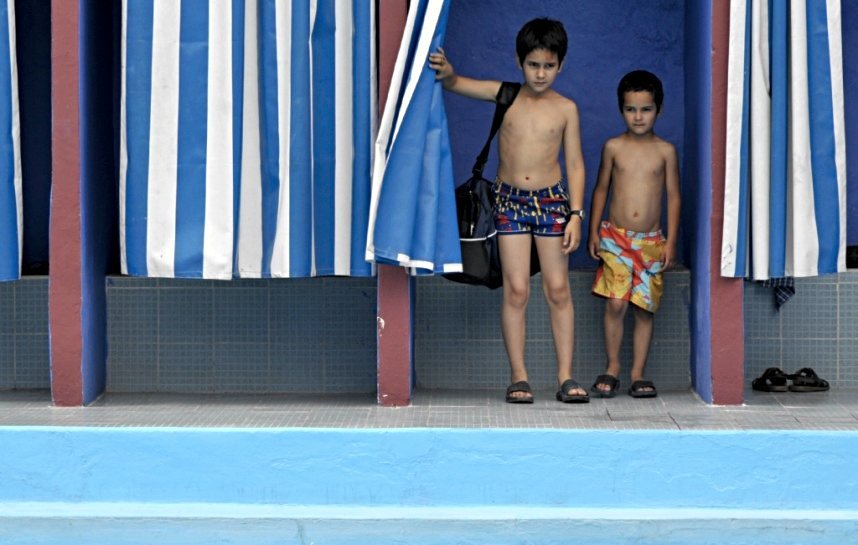 You recently said that Abel’s story is universal. Why did you decide to make the film in Mexico?

A director’s first [fiction] film is often about growing up and finding oneself. No matter how far removed the film’s story is from your own life, you always end up looking back to your childhood, going back to who you are.

So directorial debuts are always autobiographical?

Not literally. You could make a film about pigs talking to each other, but ultimately it will be your voice that comes through regardless. Later in your career, perhaps you become more cynical, and you can keep yourself at a distance from the characters you’re creating. But at the beginning, it’s tough to have the confidence to describe things other than those you’ve been dealing with all your life.

You might have had a wider international audience if you’d made this film in Hollywood.

I thought about that many times. I own a film distribution company [Canana Films, together with Gael García Bernal], so I know what happens once shooting’s finished. In the editing room I became preoccupied with the public reaction. I don’t make films for myself; I make them in order to communicate with an audience.

Where on the international festival circuit has Abel been most positively received?

It’s been different everywhere I go. Last night, I thought I felt a coldness in the audience.

Yeah, my aunt – who’s English – said, “Remember, you grew up in Mexico, and people are different here.” But I’d say there were three screenings that were particularly important. The first was Sundance, which was the first time I saw the film working with an audience. People applauded when Abel puts the chocolate cigarette in his mouth, as if they were trying to interact with the film. Second was Cannes, where the silence in the audience was so intense you could cut it with a knife. They didn’t laugh at all for the first 40 minutes of the film… yet they gave me a standing ovation! Then last night, because my mother was English, and so half of my family was there to see it.

You mentioned your company Canana Films. Its production output consists mainly of documentaries about Mexico, including your debut documentary film J.C. Chavez – The Ultimate Mexican Hero. Are you keen to be seen as a Mexican filmmaker?

It’s not a patriotic thing. Mexico is where I fell in love for the first time, it’s where my family lives… so however much I travel, I inevitably return there. And in fact, today the country is in a terrible condition.

Hence all the documentaries, many of which have a socio-political flavour.

[Bernal and I] run a documentary film festival called Ambulante, which moves from town to town in Mexico. Its purpose is to show people films that may not have any obvious connection to them, yet somehow reflects them and their lives. Cinema is a mirror that can change the world.

So your fiction films also function as mirrors?

Yes. Films that I enjoy watching are those that make an argument, take a specific point of view [on an issue]. And that kind of film always ends up functioning like this metaphorical mirror, telling the audience members something about their world.

You yourself have said how little funding there is in the Mexican film industry. How do you explain the proliferation of cinematic talent coming out of the country?

When faced with problems such as poverty and violence, artists get the urge to say, to shout, to vomit stuff.

I can think of countries that have these problems, but no cinema to speak of.

I guess so. But the same party ruled Mexico for 70 years, and only fell from power eleven years ago. In this sense, Mexico is a teenager: it’s finding its voice, and I think that a lot of filmmakers are celebrating this. But we’ve got to make a distinction between the Mexican film industry and a small collection of individual voices. There’s definitely a sense of community among those individuals: it’s about celebrating the success of the others.

You and Gael García Bernal are seen as something of a duo. How have your careers been affected by that association?

Positively, because it’s not an association that grew out of professional necessity; we were childhood friends who ended up working together. And when we’re together, there’s a strength that’s otherwise lacking. Take the Ambulante festival: the two of us together managed to create and organise it in five months. Same thing with Canana Films. We also have our own individual lives… but it’s nice to be able to call each other up whenever. It makes you feel like you’re a part of something bigger.