The ties that bind: Scott Graham on Shell

Our 2012 Young Journalist Competition winner Dasha Lisitsina, 21, talks Highland stillness and riches with the writer-director of a stark debut feature. 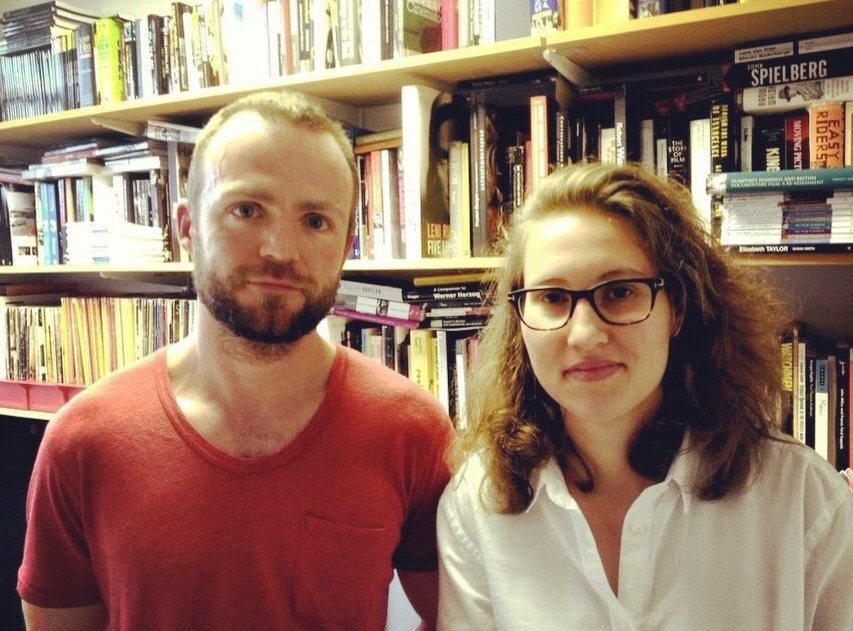 Scott Graham, director of Shell, with Dasha Lisitsina, the winner of our Young Journalist Competition in the 19-22 category.

Scott Graham’s first feature film Shell explores the fraught relationship between a father and a daughter – Shell and Pete – living in a petrol station in the remote Scottish Highlands in the absence of Shell’s mother. Shell’s love for her father, for whom she tries to replace a wife, makes it difficult for her to leave her lonely life there, although the possibility of escape is a threatening but hopeful undercurrent throughout. Pete is painfully aware of Shell’s need for affection, but emotionally distances himself from her to deal with the daily reminder of her mother’s absence as Shell becomes a woman.

The film’s long, economically composed scenes draw the viewer into Pete and Shell’s intimate relationship, conducted through subtle glances and gestures and defined by isolation and longing. The characters are inextricably linked to the landscape of the film – harsh and magnanimous – as well as to each other. Much of the film is dedicated to creating a strong sense of place: the Highlands are not just a setting but a main character. Shell’s meditative, haunting images stay with you long after the film ends.

Graham talked with me about the creation of Shell, his influences and why he makes films.

Dasha Lisitsina: How did you come up with the idea for the film?

Scott Graham: The original idea for the story came from driving from northern Scotland to Glasgow, where I was passing locations like the one in the film. I thought about a character tied to a location like that and made Shell as a short film in 2006, but it’s almost completely different to the feature. What carries from the short to the feature is a sense of isolation. But the central relationship between Shell and her dad is entirely different in the short: he’s bed-ridden and dying and it’s more out of loyalty that she’s staying rather than love, so the heart of the feature film wasn’t there in the short.

It’s interesting that the first thing you mentioned was landscape. For me the landscape in the film was hugely important – not just a setting, but a main character. Did you have that particular location in the film in mind when writing the script, or did you find it after the script was finished?

I knew the Highlands fairly well, so I had a sense of the atmosphere of the place and even certain images while I was writing. But I didn’t know about that particular place until after I wrote the script.

What kind of images did you have in mind while you were writing?

I had a couple of images in my head: the shot of Shell walking on the road after she chases after the young mum, the texture of Shell’s clothes, her boots on the tarmac, the colours of the Highlands – things like that.

A lot of the shots are long and still, almost like pictures. What’s more important for you: the aesthetic composition of a shot or its role in the narrative? Or do you think those two things are intertwined?

They should be intertwined. My intention is to use those images or pictures to tell the narrative. Shell and Pete aren’t articulate characters in the way that they communicate, so I knew this was not going to be a film about words. But I still felt there was a story to tell: I wanted to take the audience on a journey. Even though we never leave the garage, I still wanted a sense of forward momentum. We needed those images to do that, particularly the long landscape shots that we linger on to create a passage of time and get a real sense of the place. 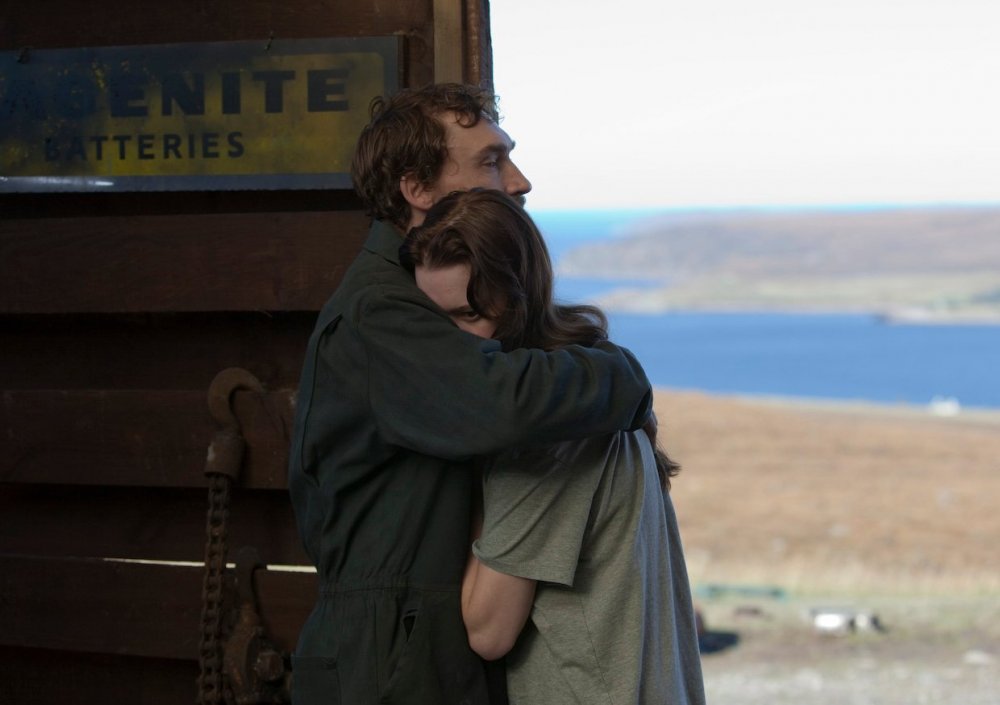 There isn’t very much dialogue and the film relies heavily on physical acting: subtle body language and facial expressions. Did that make it difficult to write the script? And how did you convey what you wanted to your actors?

I’d been working on the script for quite a long time. I went to a lab in Amsterdam for six months to write it. Writing is incredibly lonely anyway and leaving home intensified the loneliness, but it helped me focus. I was definitely experiencing some of the same feelings as the characters while I was writing.

I knew them really well on paper and was looking for people who could carry the sort of emotions and communicate things without dialogue, so casting was very important. Before we started shooting the actors playing Shell and Pete lived in a cottage in the Highlands together for two weeks in order to get to know each other’s mannerisms and to get to the point where they could have an argument.

What’s your favourite scene in the film?

I particularly like both the scenes with Shell and Hugh at the garage, especially the second one where Hugh is on his way back from a failed trip to see his sons. It’s a very uncomfortable scene, but my heart really goes out to both of them. I think it encapsulates that all of the surrounding characters, people like Hugh and Adam, take from Shell. She’s meeting their loneliness and their needs without really meeting her own.

My favourite scene in the film however is the last, in the truck where Shell leaves the garage. I think it’s because someone asks her if she minds the radio and it’s such a small thing but it’s one of the few times anyone asks her what she wants. I think it gives the end of the film a sense of hope, even though her future is uncertain.

That’s also the only scene in the film where the music becomes extra-diegetic and features one of the very few songs in the film. Why did you choose a quite naturalistic soundtrack?

The thing about a character in that place is that it would be extremely limiting to be Shell or Pete, but for me it was so rich as a writer. I just wanted to capture all the things that would be there if you lived there: the varying sounds of nature and of the wind.

The sound designer and I spoke about creating a soundscape rather than a soundtrack with music. We talked about the different surfaces of the garage and how the rain would sound differently on the house than it would on the shop and on the scrapyard. I think that Shell’s world is rich in in terms of all these different sounds and sights, but it’s also incredibly sparse and bare, so unless she’s listening to the radio or singing, there’s no music in her life.

To me the film seemed both ‘realistic’ and poetic. Did you intend to make a film that belonged to one mode more than another? Is genre important to you?

My producer called the film ‘poetic realism’, but I think life is poetic. Something can be realistic and poetic at the same time.

There was a definite intention to create something timeless in the sense that you couldn’t tell when it was set, but genre is not something I really think about. I think it would distract me from what’s really important. All I did was look at what was truthful to me and hoped that it would be truthful to others when they watched it. I want to find common ground with audience members – that’s why I make films.

Which directors or films have influenced you?

I grew up watching a lot of 70s American cinema, because those were the films that were on television in Scotland in the 80s. They were an introduction to cinema for me.

Much later, Scandinavian cinema – filmmakers like Lasse Hallström and Lukas Moodysson – moved me a lot. I found emotions there that were more truthful to me or connected more to me than perhaps those in the old American films.

Then, Tarkovsky – Andrei Rublev in particular – was a huge influence on me. I watched Andrei Rublev many times in the six months before I made Shell. I think it gave me a sense of courage.

What exactly is it about Tarkovsy’s films that you like?

I find it very difficult to answer that, which must be why he probably is my favourite filmmaker. His films are incredibly rich, yet so sparse. Images just stayed with me for weeks and months after seeing them and they feel like part of my life now. That’s what films do though: they sort of live within people.

Related to The ties that bind: Scott Graham on Shell