Filming life in a Lebanese refugee camp for displaced Syrian families, single-shot cinema master Leonard Retel Helmrich needed a like-skilled female collaborator to shoot where he couldn’t. Come the edit, he suffered a heart attack. Ramia Suleiman explains how she filled the breach.

A shot of refugee camp Majdal Anjar in Lebanon’s Beqaa Valley, from The Long Season

Dutch filmmaker Leonard Retel Helmrich is best known for his trilogy of films The Eye of the Day (2001), Shape of the Moon (2004) and Position Among the Stars (2010), which follow the lives of three generations of one family based in Indonesia. Intimate, intuitive and visceral, they unfold with a sensory logic that captures the intensity of the environments and the feelings of his subjects. The camera floats along with the protagonists, following their movements and capturing personal dramas.

Helmrich’s inventiveness with this single-shot technique has led to him delivering workshops worldwide about his Steady Wing technology. It was at one held in Lebanon that Syrian artist Ramia Suleiman attended. Helmrich needed a cameraperson and invited her to join his new project The Long Season, a documentary following the lives of a group of Syrian seasonal workers living in limbo in a Lebanese refugee camp while they are unable to return to their home country due to the war. 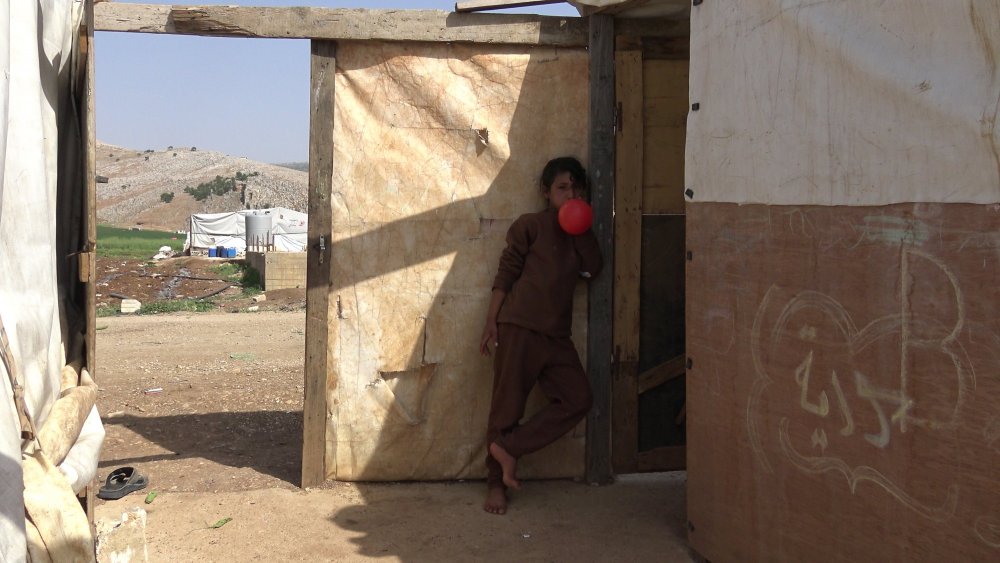 The Long Season is Suleiman’s first venture into filmmaking: “After what happened in Syria, I just left Damascus to Lebanon,” explains Suleiman. “So I did the workshop with [Helmrich], and then later he asked me if I would be interested to work with him, because he needed somebody, especially a woman, to work in the camp with him.”

At the time Suleiman was working on product design with her friends, creating lighting elements with cheap or wasted material. She found a kindred spirit in Helmrich’s technological inventiveness. “This is what I like about him,” she emphasises, “and this is how we met, because we were also thinking in the same way. Working with our hands – he likes to work with his hands, to always try and discover things, material. And his way of thinking about the tools: he always thinks about how he can make the shot, and tries to create tools accordingly.” 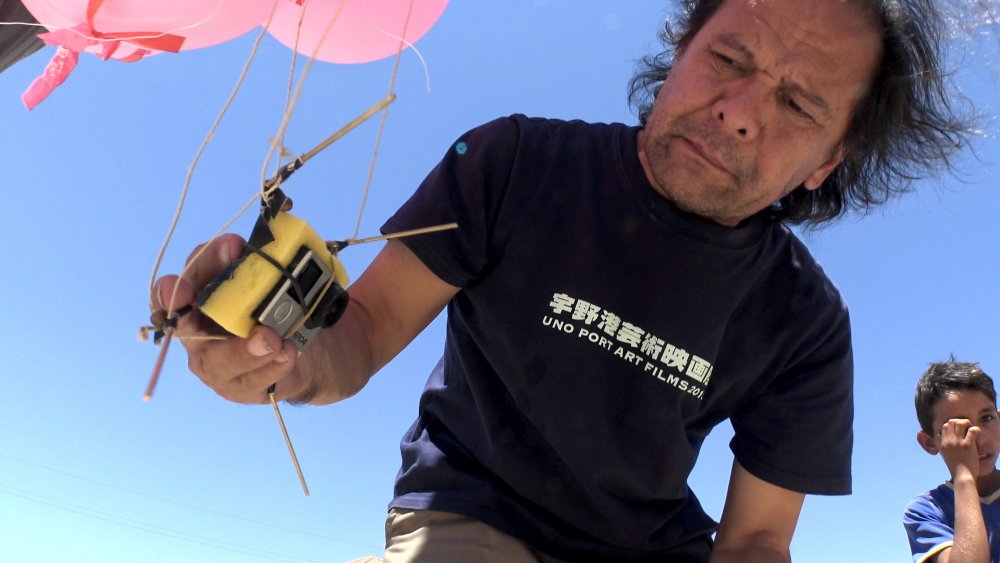 One of Helmrich’s famous devices is the Steady Wing. “It’s a kind of machine that you fix the camera on, so you can move and keep the shot steady, stabilised. It’s like a machine that has wings, so you can extend it and fold it,” Suleiman elaborates. “So when you are shooting and walking with this device, however you move, the camera is kind of flying with your movement. You hold it with your hand. It’s connected to your body – it’s a bit far from your body, but it becomes a piece of your body.”

Helmrich’s approach uses movement to do the work that many filmmakers would complete in the editing of the film. Instead of cutting between subjects, he moves around them. “For example,” Suleiman explains, “if you are shooting two people talking to each other, you see me from this side and then you orbit around me until you see the other person, and then you go to him. So you capture the two persons in the same shot.” Rather than cutting in post-production, Helmrich follows his subject of choice and his intuition in the moment, and rolls straight into the next development of the narrative in real time.

Suleiman’s camerawork in The Long Season is equally intuitive, showing extraordinary intimacy and a poetic eye. Helmrich’s technique is an expansion of the cinéma vérité form, and he considers motion to be a fundamental aspect of the Single Shot Cinema method. “The philosophy he developed is that when you are shooting an event you have to be part of it, by going inside the event and moving, reacting inside it. Instead of questioning people, you move. You move around them. So you become part of the event.”

The Long Season focuses on an area in Lebanon where Syrian agricultural labourers would visit annually to work. With the outbreak of war, the labourers were unable to return home, so pay rent to the landowners to live in tents while they wait for Syria to stabilise. Helmrich had already been researching the project for months, and had begun shooting before Suleiman joined him. Once there she developed a rapport with the women at the camp until they felt comfortable with her and her camera. “When I started, most of the time we were just spending time with the people; sitting with them, chatting, having tea”, she shares. “We built a relationship with them.” 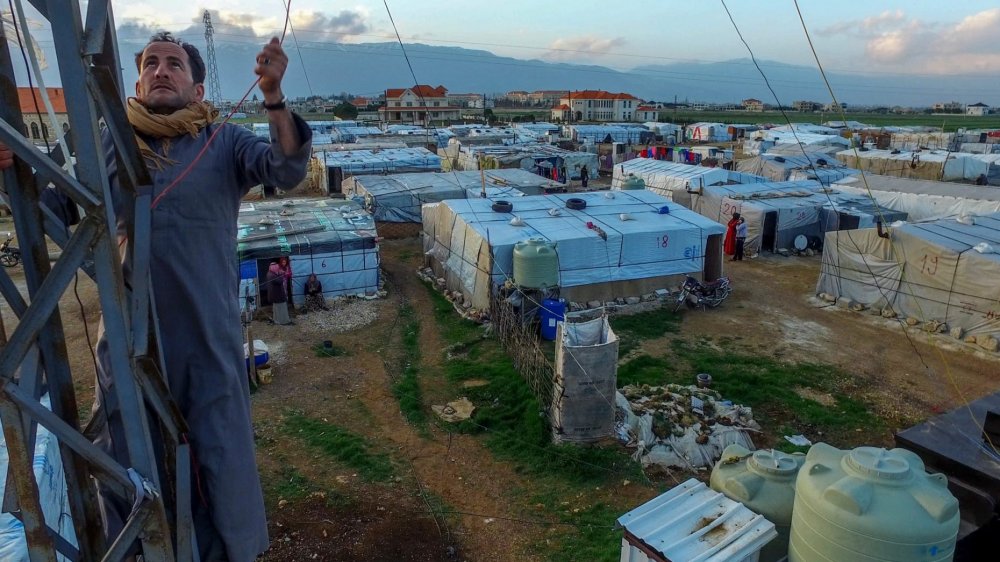 The film explores stories that interweave through the lives of the camp’s inhabitants, within which traditional values and beliefs intensify the pressures they face. There’s the family of a man with two wives both unhappy about the situation; a frustrated young man with unrequited romantic feelings; a school teacher whose father wants her to return to Raqqa to be married, and a potential suitor for her who has other options on the horizon. The film reveals a community working together to provide support and guidance to one another, and showing deep compassion. “They were already open to the shooting, and so we could build a good relationship with them. That allowed us into these intimate moments, and to make these close shots,” says Suleiman. “The shooting lasted a year and a half. Going there regularly and having this relationship with them I think sometimes allowed us to catch the kind of moment normally you can’t have.”

Feelings of claustrophobia are magnified in this small community of displaced people, as are the resonances of trauma. Children illustrate their experiences of the war at the camp’s school. A little boy repeatedly tries to attack his slightly older sister with dangerous tools. A young man self-harms. The Long Season captures remarkably private moments and personal exchanges, such as the heated arguments between the two women married to the same man. “When I was shooting the women fighting, they were sitting in a room on the floor, a very small place. I was sitting between them, moving between them, so in the moment you became part of the event. People forget about you, or they don’t notice you anymore,” Suleiman elucidates. “But when you spend five, six hours there, of course you will catch such things. You become like a part of their lives at that moment.”

Suleiman joined the post-production team in Amsterdam after filming, but two months into the edit Helmrich suffered a severe heart attack that left him in a coma. After much discussion, the production company decided to finish the film with her: “I was the only person who could be part of this. Because I was there from the beginning, in the shooting, and know the people and the language. We were more or less in the middle of editing. So, based on the conversations we had before we continued with the editing. It was a huge amount of work, and a big responsibility on me, because at some points you have to decide things, and you always ask ‘Did he want this or that?’ But I really tried my best.”

Upon finishing the film, Suleiman and the producer, Pieter van Huystee, put on a special screening for Helmrich at the hospital. Suleiman recalls how, though he was still struggling to focus at the time, Helmrich watched the film through to the end, then gave a thumbs-up signal. “And he asked to bring the letter-board so he can choose a sentence, because he’s not talking yet – and on it he wrote: “This is very good expression of single-shot cinema.” So we were amazed. He liked it. This made me feel, ‘Okay, we did our job.’”

Related to Steady on the wing: how Ramia Suleiman completed Leonard Retel Helmrich’s The Long Season