By preserving images of black and gay life in and around Liverpool, Hughes has created a powerful archive of her own, and raw material for other filmmakers to refashion into revelatory new works. 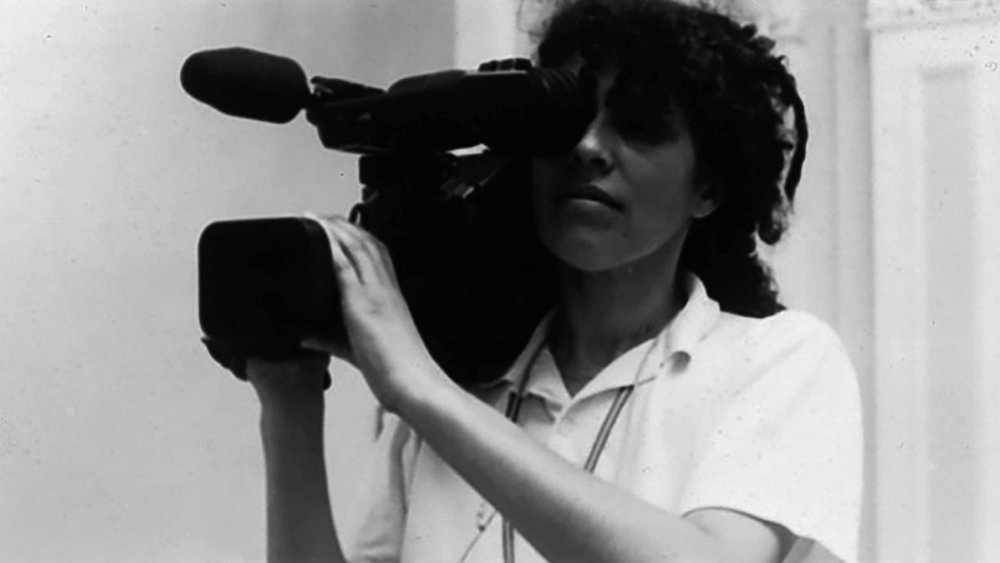 What is it that we want when we go to the cinema, turn on the television, or go to YouTube to entertain ourselves? For some, it’s escapism. For others it’s all about the visual – seeing breathtaking images that we could only dream of making.

Sandi Hughes’s Rewind Fast Forward archive screened in special Reel Good Film Club events in Nottingham, Manchester and at BFI Flare in London in March 2017, and keeps a web presence at rewindfastforward.net and on YouTube.

There are many answers to this question, and if you assembled a group of ten people in a room, I’m sure they’d all give you vastly different responses. Yet for Sandi Hughes there has always been one: she wanted to see her mates onscreen. While we’ve all wanted to see people that look like ourselves – particularly if, like Hughes, you’re part of a minority group in the UK – she meant this literally. She wanted the real people she knew and loved projected on to the big screen, because she considered them every bit as fascinating as any movie or TV star.

Hughes’s solution was to put her friends and family on the screen herself. And so, in the 1970s, she began to capture her friends and family on a variety of media – initially in still photographs, then on film and later digital moving image. And while Hughes’s project may not initially have started in a radical form, the project that developed from it certainly is. She has now taken three decades’ worth of material and turned them into the Rewind Fast Forward archive. 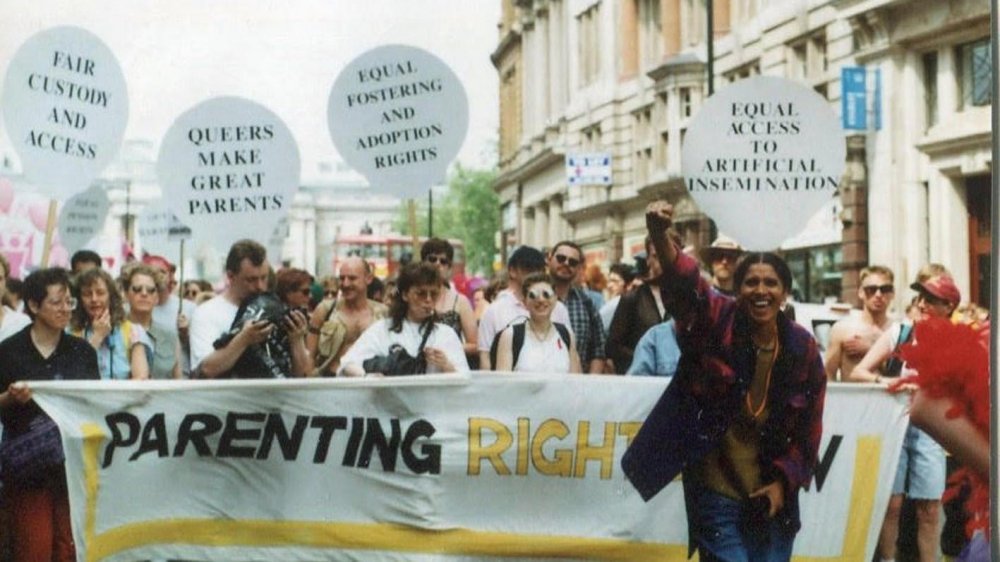 From the Rewind Fast Forward archive

At a recent panel session I led, Hughes said: “I have had such an unusual life.” Hearing her talk about her experiences, it is apparent just why she has amassed so many interesting people and so much material for the archive. She is charismatic and fascinating, just as compelling in person as she is behind a camera.

Born to a black GI father and a white mother in Bristol in 1943, Hughes was put in a children’s home at birth, which may be one reason why she has sought out her own makeshift family. After working in the women’s navy for years and settling down into what would turn out to be an abusive marriage, Hughes began working in a gay pub in Liverpool called the Lisbon, one of the places that helped her see that she was “not normal”.

Twenty-seven, Hughes claims, was her age of “reinvention”, and also the year in which she lost permanent custody of her children because of her sexuality. This change in Hughes’s life led to a change in how she viewed the media, and she claims she was dismayed by the way that people who looked or acted like her – people who were black or gay – were portrayed. And thus the project was born.

What makes Rewind Fast Forward so special is that, as with many recent projects by black artists and filmmakers – the innovative retrospective project Black in the Day springs to mind – it takes the old and mixes it with the contemporary. While the archive exists untouched as a relic of Sandi’s life and the lives that her cameras have touched, the archive has also been used – rewound and fast-forwarded if you will – by filmmakers to create new and innovate works.

Enter Evan Ifekoya and Hayley Reid, whose films are evocative and reveal exactly why Hughes’s archive is so important. Reid’s Merseyside on My Mind highlights the iconography of the location for much of Hughes’s footage. The film speaks of Hughes’s life in Liverpool and the uniqueness of the city, but also, when played in other regions as the film has done recently, shows how over time, cities and locations can blur into one.

Reid’s second film, Auld Lang Syne, inspired by the #carefreeblackkids hashtag that arose on Twitter in the summer of 2016 after yet another bout of police brutality in the US, features various clips from Hughes’s archive of children playing, and dancing, of mothers and children.

Merseyside on My Mind trailer

Ifekoya’s film, She Was a Full Body Speaker, sees Hughes’s footage transformed into a hypnotic nightclub scene – projected on to a background and then filmed, showing us the capacities of what archive film is and can become. As in Reid’s piece, we are shown images of black people living and dancing that we are so rarely afforded onscreen. Overlaid with spoken word, the piece seems to speak of both shared and individual experiences.

And finally, Hughes’s own piece, Planet Tumbleweed, is, as described by the artist herself, “a social issue film, exposing structural inequalities” in Liverpool. In it, Hughes interviews various members of the community, asking them “Is there equality in Liverpool?” Their responses are scorchingly relevant: as with Reid’s film, the answers and footage here show that the subjects and their views could be from any time and any place.

Rewind Fast Forward entered the lives of Reel Good Film Club in November of 2016: we were invited by programmer and poet Jay Bernard to help organise regional screenings, putting our own spin on how the project could be interpreted in different cities. We selected Nottingham and Manchester as our two cities, and curated two different events.

We think the project’s ties to Liverpool are important, but we also value the ways in which it reveals shared experiences for those that are black and/or queer. In order to highlight this, we invited a Nottingham-based filmmaker and archivist, Ioney Smallhorne, to screen a film from her series Black in the City – in which she interviews various stalwarts of Nottingham’s black community – and to join a panel. Seeing the film screened alongside Rewind Fast Forward, as well as seeing Hughes and Smallhorne interact, demonstrated what we had hoped to prove. Just as Hughes’s Planet Tumbleweed shows that things are different yet much the same for women, the archive and Smallhorne’s work speak of the shared and much mythologised ‘black experience’.

For our Manchester event, at the city’s Art Gallery, we wanted to create an inclusive, friendly environment, so we followed the film screening with a potluck lunch and a zine-making workshop with local zine artist Stef Bradley. Bradley’s work is focused around urban landscapes and identity, making her a perfect fit for a project so focused on time, location, sexuality and ethnicity.

My involvement with the project has been a great experience. Rewind Fast Forward has changed my expectations of the capacities of film – it’s certainly given me a renewed interest in the huge piles of photos and reels of film that my family have lurking somewhere in the loft.

One thing, however, hasn’t surprised me about the project at all is its revelation of the immense talents of black filmmakers and creatives. Surely many of us have suggested that our friends and family would be a good cast for a TV show, but Hughes has taken this whimsical idea and run with it. Hughes and the project can be seen as contemporary to the new generation of black filmmakers – figures such as Cecile Emeke, gal-dem’s Ifama and Remani Love – who document black lives in a way that, due to the limits and gatekeepers of the film industry, seems wildly radical. Hughes and the filmmakers that have followed after her have proved that internet and collaboration are powerful tools for black filmmakers.

While filmmakers embarking on stories about black lives are often wisely cautioned to ‘avoid the past’ – films such as Hidden Figures are vital, but it’s time we saw something other than slaves and maids – here the past is absolutely crucial. By revisiting her past, and making it part of her present (and fingers crossed, her future too), Hughes is completely in control. She started the process and passed the torch on to Ifekoya and Reid.

Hughes’s photos are now available to view in Liverpool’s library, where footage from the archive will shortly also be available to view. As the Rewind Fast Forward archive is secured in the library, something becomes set in stone – Hughes is here, her friends and family were and are here, we are here.