“Where did you get this old fossil?”: Michael Powell’s first film rediscovered

Caste, a lively adaptation of a comic play about class, was the moment that the British director “tasted blood” and discovered his vocation. Now it is screening in London again for possibly the first time in 80 years. 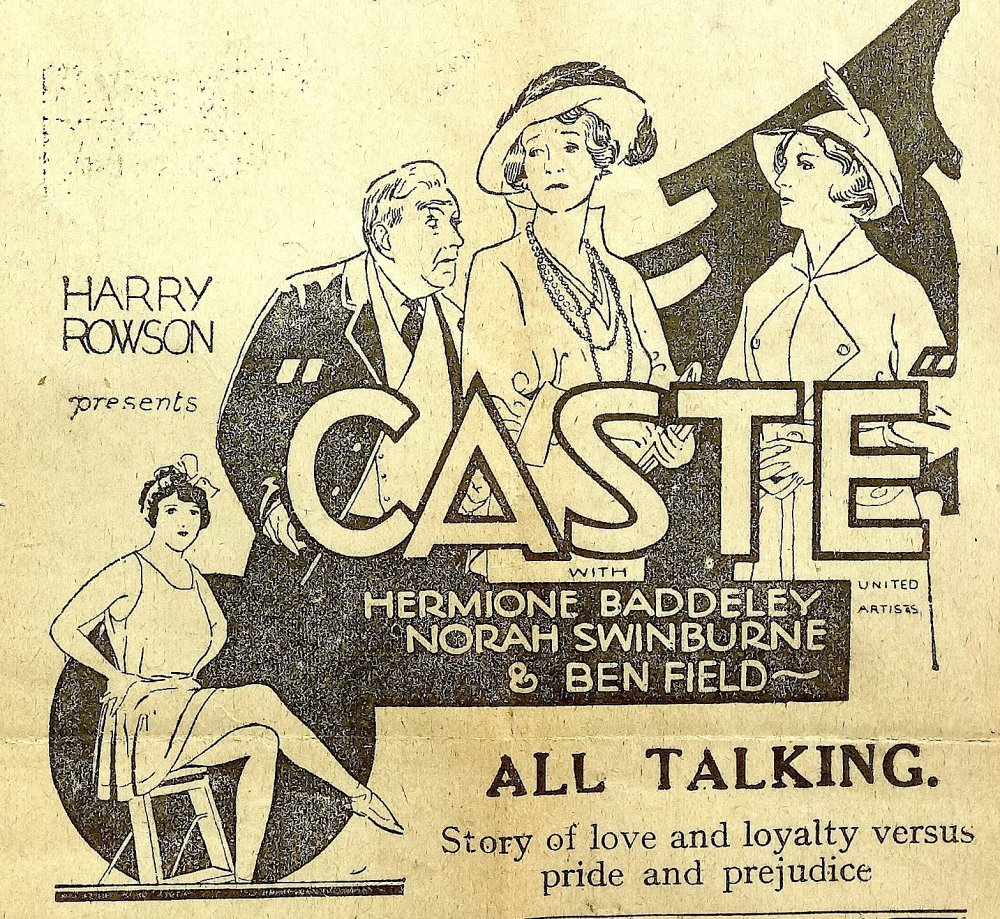 A flyer for Michael Powell’s Caste (1930), when it was on release in Sunderland
Credit: Steve Chibnall, private collection

As Michael Powell tells it in his first volume of autobiography, A Life in Movies, the story began with a letter received from his Russian friend Lee Planskoy, a technical expert met in Nice when they both worked for the American maverick filmmaker Rex Ingram. The letter dates from early 1930, when Powell suffered unemployment after several months’ lowly work at British International Pictures. A job, it appeared, was on the horizon: “Jerry has got some sucker to back him to make a talkie. It’s a play by T.W. Robertson called Caste. Get it, read it and wire him what you think of it.”

Caste will be screened at the Cinema Museum, London, on 9 November 2017, in association with the research project British Silent Cinema and the Transition to Sound 1927-1933, funded by the Arts and Humanities Research Council. The film be preceded by an illustrated talk by Geoff Brown. Admission free.

Powell found a library copy, read it with the reverse of pleasure, and wired Jerome Jackson, the American lawyer and would-be producer at United Artists’ London office, who had been sponsoring Planskoy’s camera-trick experiments. Powell’s telegram to Jackson read: “Where did you get this old fossil? You can’t be serious.”

So began not just Powell’s baptism into the new world of sound cinema; but also, more importantly, his baptism as a film director, a role he then pursued and cherished with an almost obsessive passion. When the filmed “fossil” reached exhibitors and critics in September 1930, Powell was credited only for its scenario, adapted from Robertson’s play. The sole director credited was Campbell Gullan, the Scottish actor who had played in a previous silent film of the play (1915) and had recently received a “staging” credit on the Fox Film Corporation’s talkie The Sky Hawk, where he guided actors through their scenes in a drama about a London Zeppelin raid.

According to Powell, Gullan performed a similar function on Caste, issuing instructions solely to the actors, while Powell stood alongside at the Nettlefold studios at Walton-on-Thames, functioning as the associate director, overseeing all technical matters. Following shooting, he also assisted John Seabourne in the film’s editing. For one precious morning, when Gullan was absent attending a theatrical wedding, Powell shouldered every directorial responsibility, actors included, and relinquished the reins with reluctance. “I had tasted blood,” he recalled in his autobiography. “Nobody would ever keep me outside the studio walls again.” One year later, in the summer of 1931, with Jackson producing, Powell finally directed his first official film, Two Crowded Hours.

Powell devotes five pages to Caste in A Life in Movies – one sign of the film’s personal significance. Even so, most researchers seem to have paid the BFI archive’s 35mm viewing copy little attention. The upcoming screening on 9 November at the Cinema Museum, London, in association with the research project British Silent Cinema and the Transition to Sound, could well be the film’s first public airing for over 80 years. 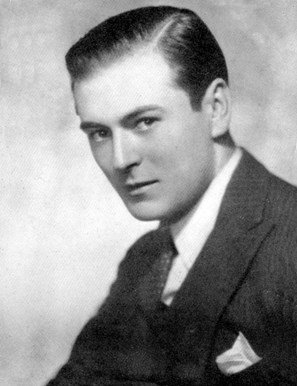 And the play – a realist comedy about the class division between the Hon. George D’Alroy, the lowly dancer who becomes his wife and her rollicking drunkard of a father – is no useless museum piece. The class attitudes and some of its sentimentality may smack of 1867, the year the play premiered, yet the mordant bite in Robertson’s dialogue and the comic clashes between snobby rich and truculent poor proved potent enough to generate a successful stage revival this year on the London fringe, at the Finborough Theatre.

Powell’s script adaptation alone added some ginger by spreading the action over wider locations, including at the beginning the ballet studio where we see our heroine, Esther Eccles, rehearsing, 18 years before Moira Shearer’s dancer flexed her limbs in The Red Shoes. Another aid to refreshment is Powell’s updating. This time the Hon. George leave his young wife not to serve with his regiment in India but to fight in the cataclysm of the First World War – still a painful memory for many audiences in 1930.

But most of the film’s enlivening spice comes from the jolting surprises of tone and manner as Gullan’s cast and Powell’s visuals glide or lurch through a scenario pleasingly punctured with camera trackings, lively spots of audiovisual montage and dramatically piquant closeups. (Watch for the carefully judged shots of hands delivering and receiving a crucial telegram regarding D’Alroy’s fate.)

Then there are the pungent clashes in acting styles. In his film debut, Sebastian Shaw (pictured above), handsome but annoyingly stiff, speaks with the typical upper-class West End drawl; ‘piano’ is pronounced as ‘pee-arno’. Hermione Baddeley’s obstreperous chatter as Polly, the heroine’s beady-eyed younger sister, bounces brightly on the soundtrack, though it’s hard to imagine Polly as any sibling of Nora Swinburne’s politely velvet Esther. Even within the Eccles family there seems a class divide.

The greatest jolt arrives when Powell’s adaptation reaches the play’s most famous scene. Ben Field, as Esther’s unregenerate father, suddenly shifts the film’s stylistic register, raging against inequality as he stands by the bassinet harbouring his grandson and toys with pawning the baby’s coral necklace. “Oh society!” he wails; “Oh governments! Oh, class legislation. Is this right? Shall this mindless wretch enjoy himself while asleep with a jewelled gawd and his poor old grandfather want the price of half a pint? No, it shall not be.” Theatre historians may regard Robertson as a harbinger of stage realism in an age of Victorian extravagance, though you might not guess so from the soapbox rhetoric of this dialogue clump, left unaltered from the play. 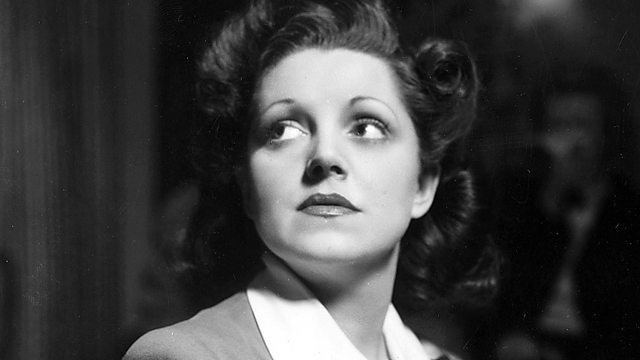 Today, that clump spotlights the question that looms over any consideration of Caste and its place in Powell’s career: Powell’s attitude to the talkie revolution – a revolution that made every British producer, including low-budget hopefuls like Jackson, follow the Hollywood majors and chase after synchronised sound. Stirred by his experiences working with Ingram, Powell had returned to Britain with a driving belief in silent cinema’s visual power – a belief duly reflected almost 60 years on in the pages of A Life in the Movies. Silent film, he proclaims, was “the greatest storytelling medium that has even been invented”, but a medium that the microphone could only sabotage. He recalls an ominous remark by Hitchcock during the shooting of talking scenes for Blackmail in the spring of 1929: “Silent films are a dead duck, Mickey… Sound is the only thing making money.”

Hitchcock’s equation of sound films and money seems to have taken root in Powell’s mind. For over the following winter, unemployed, he wrote a 61-page story about the coming of sound, cunningly titled Money Talks (a typescript survives in the Powell papers at BFI Special Collections). Sentimental, heavy with clichés, it is not a distinguished creation, either as a literary artefact or as a stepping-stone to some future film script, though it does gives a useful indication of the kind of notions then swirling around Powell’s head. 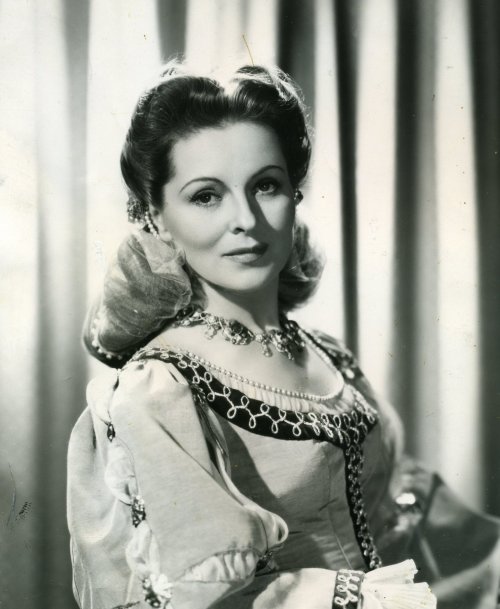 The narrative concerns the biggest box-office draw in the American film business, a silent comedian and director, Milton Cook – I’m tempted to call him Chaplin for short – who faces personal and creative crises as soon as The Jazz Singer ushers in the talkie revolution. Exhibitors complain about his recent pictures: too much pathos, too much highbrow cleverness. Refusing to take the plunge into talkies, Cook makes another silent vehicle. It flops. While his young screen protégée and amour Betty rises to the top, Cook himself disappears, out of sight in Europe. But he re-emerges for the happy ending, with his first sound picture too. The Broken Clown, a Pagliacci variant, co-starring Betty, does not sound like a film I’d be eager to see, though Variety in the story rolls out a rave review: “Cook has learnt all there is to know about sound technique and added a lot more for others to learn… Don’t miss this one on any account.” The end.

Six months or so after concocting this queasy fiction, it was Powell himself, not Milton Cook, who engaged with microphones for the first time, working as Gullan’s associate director at Walton-on-Thames – Cecil Hepworth’s former studio, initially installed with Powers Cinephone sound (September 1929), then revamped the following summer with the superior apparatus of RCA Photophone. Caste marked the new equipment’s debut. An echoing halo around the dialogue suggests that studio walls were insufficiently cladded to combat reverberation. Sounds of wartime bombardment clearly derive from timpani thwacks off-camera. Unlike the lucky Cook, no one on the set had learnt all there was to know about sound technique, though Powell’s lively effort to prevent Caste becoming the intellectual’s abomination, canned theatre, is clear enough. 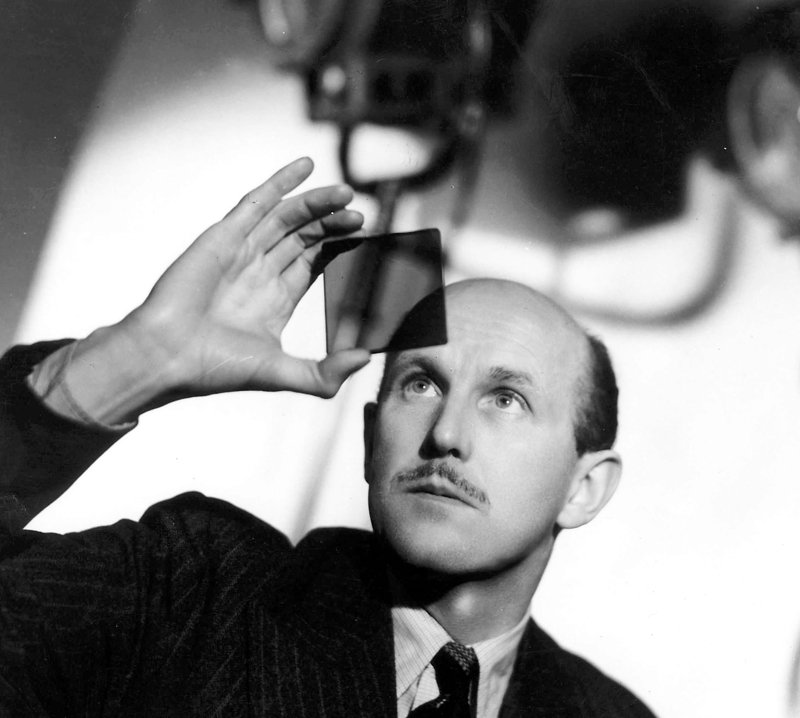 At the same time, the existence and substance of Caste – still a fairly talky talkie from a talky play – may help to spread some valuable scepticism over Powell’s later claims to have always been a silent director at heart, “one of the Old Silent Brigade”. “In my films,” he writes in A Life in Movies, “the images are everything”, and aims to prove his point by listing carefully chosen portions of his films, like the ballet sequences in The Red Shoes, or picking those films where spoken dialogue is generally of little account (The Edge of the World, The Tales of Hoffmann).

Words, admittedly, do not always take priority in Powell’s mature films, though the world of the theatre still keeps poking through, both in his choice of material (Hoffmann, Oh…Rosalinda!!, Bluebeard’s Castle, all from operas or operettas) and in the projection of conscious artifice in matters of design and colour. Caste the film is not a fossil; it is a lively embryo, and the first important step towards Powell’s future.

Related to “Where did you get this old fossil?”: Michael Powell’s first film rediscovered